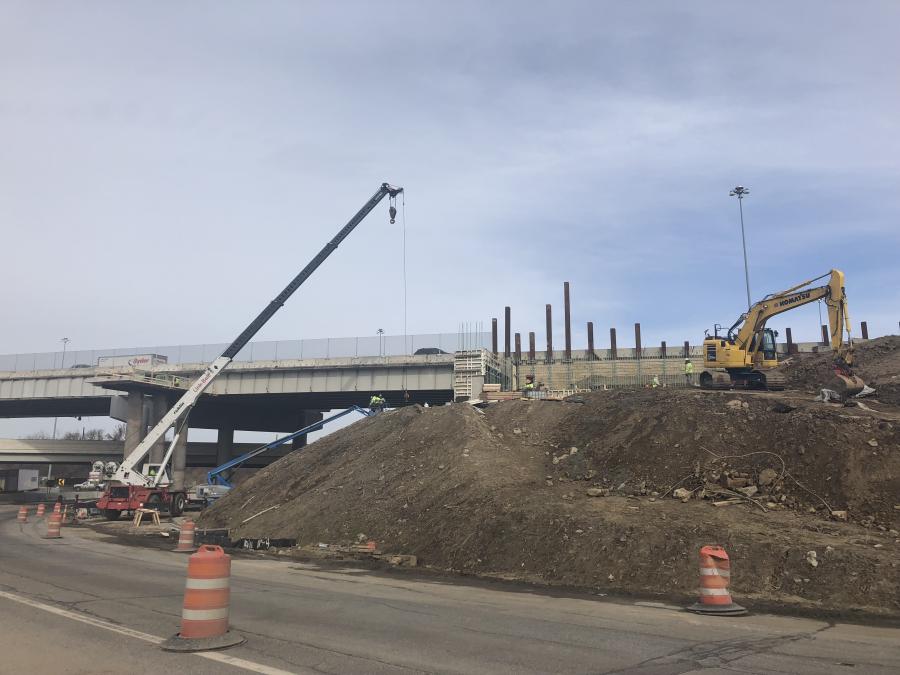 The widening and reconstruction of the I-77 bridge is part of ODOT’s Cleveland Innerbelt Modernization Plan.

As part of the Cleveland Urban Core Projects, the Ohio Department of Transportation (ODOT) has what it calls the Cleveland Innerbelt Modernization Plan. One of the initiatives in the work is the widening and reconstruction of the I-77 bridge over I-490 and the improvement of I-77 south of I-490 — a $25.6 million contract that was awarded to The Ruhlin Company.

The ongoing I-77 work has not been easy, but the Ruhlin project team and crews are tackling any obstacles that come their way. 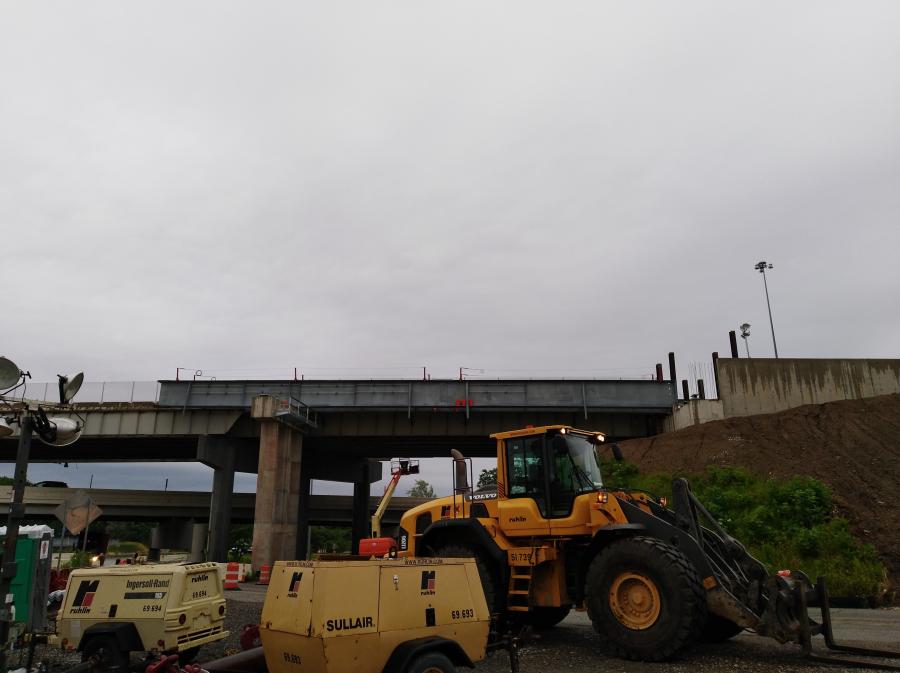 The other road work includes 700 ft. of approach roads on either side of the new bridge, along with ramp roadway replacement and improvements.

The work started last October and is expected be completed in October or late fall of 2019. This project is being financed by state and federal funding.

“This piece of the Innerbelt Modernization Plan will improve safety and add capacity on I-77 into and out of downtown Cleveland,” said Amanda McFarland, ODOT's District 12 public information officer. “The planning began in 1997, however the work was put on hold as it was the alternate route for the Innerbelt Bridge reconstruction work. The area was a pinch point for north and southbound traffic prior to construction. Congestion-related crashes along this corridor will hopefully be solved by this project.”

The old bridge was built in 1964 and carries 71,400 cars and trucks daily. The new bridge was designed by Richland Engineering Limited.

“The bridge deck was reaching the end of its useful life,” said McFarland, “and would have been scheduled for replacement had this project not been in the works. The lifespan for the new bridge is 75 plus years. All new roads and bridges are built to current design standards and can carry heavy loads.”

The I-77/I-490 interchange has four levels — level one (lowest level) is I-490 (six lanes of traffic), levels two and three are system interchange ramps and level four (top) is I-77. The existing vertical clearances between all these levels are substandard.

“We had to design girders that were much shallower than the existing ones,” he added. “To do this, hybrid girders were used. Hybrid girders use stronger steel for the flanges than the steel used for the web. However, shallower girders typically mean larger deflections, so the designer had to adjust girder size and spacing to meet the design requirements for strength and deflection, in addition to ensuring they did not raise the I-77 profile too much.”

Calanni noted that while the hybrid girders are not a new concept, they are not used too often because most highway bridges do not have the girder depth and clearance challenges that ODOT faced with this bridge.

“Also, metalizing is not a new concept, but it is not used too frequently because of cost,” he said. “In our case it was more cost effective to metalize the girders in the shop than to field paint the girders or shop paint and then field touch-up the paint. Metallizing is very durable, so it requires a lot less field touch-up than paint does.”

The work has impacted traffic year-round as the work proceeded over the winter; Ruhlin crews temporarily closed some lanes on I-77, as well as ramps at the I-77/I-490 interchange, in order to accommodate demolition operations during the winter months.

Thus far Ruhlin has completed partial demolition of the outside parapets and girders from the existing bridge and begun the outside approach roadway work. Piling and substructure construction is complete for the Phase 1 portion of the project and steel erection is underway for the superstructure.

“We removed approximately nine feet off the outside of the existing bridges — one girder line, and then we'll widen out the new bridge,” said Mark Myers, Ruhlin's project manager. “The big challenge is working around the traffic, and the next phase will have us boxed inside the active lanes. All access to the work site will have to come from a lane closure off I-77.”

“Most of the activities for demolition and erection require closures of the ramps, and often the closure of I-490,” said Myers, “and there are limited closure periods that must be coordinated with special events such as Cavs' and Indians' games. We also must coordinate operations with an adjacent ODOT project that is underway at the same time — the Broadway Bridge.”

Other challenges include the tight workspace.

“The areas to put equipment in are extremely tight,” said Myers, “and we're having to do a lot of temporary excavation support in and around the existing structure to allow for the construction of the new substructure. It is a challenging environment with tight constraints.”

An on-site construction office was set up nearby to help manage the day and night work that is ongoing.

“We have multiple shifts based on permissible lane closures,” said Myers. “We try to do most of the work, production and substructure work during the day, but a lot of the demolition and steel erection have to happen at night. ODOT is very understanding of the challenges, and they have a good project team and we're working together to mitigate the delays. They have a prescribed maintenance of traffic plan, and they have over a dozen portable message boards throughout the interchange system of Cleveland providing advance warning to motorists.”

Another unforeseen challenge has been the soil conditions which affect pile driving.

“It has created a delay which might push the project out an additional month,” said Myers. “We're working with ODOT, which is selectively directing us to accelerate by working some overtime in an effort to recover the schedule.

“There are areas where the piling had to be driven deeper than anticipated, which required additional set-up periods or wait time to allow the piling to gain the required capacity,” he added. “We're driving 16-inch diameter cast-in-place pipe piles. Some had to go down 90 feet and when we reached that depth, we didn't have the prescribed bearing and we had to drive them down another 40 feet. After this we still didn't have the capacity. So we had to give it additional set up/wait time. These are all friction pilings and rock was not shown anywhere on the borings.

“With these soft soils in the Cleveland area,” he added, “often you need to give the pilings seven to 10 days to gain capacity. Re-strike tests verify the capacity. If you wait it out, the piles will typically gain capacity. But we need to prove it before we can move on and pour the concrete footer on top of the piling. This happened on numerous foundation locations and has impacted the schedule.”

The steel girder erection, with the challenge posed by the ramp bridges below the new bridge, require the use of large hydraulic cranes to do the demolition and removal of the existing steel beams.

“We've done difficult projects like this in the past,” said Myers, “and we'll get past the challenges on this one.”

Ruhlin had time to plan the project schedule between the time of the bid phase and start of the construction.

“We continue to develop plans as we go,” said Myers. “Baumhoer and Guttman help with a lot of the heavy engineering planning for the supportive excavation, demolition and erection. All the engineering work is done in-house and we have the plans reviewed by an outside engineering firm for a second check.”

There are currently about 30 construction workers, along with five plus support staff on site. The major subcontractors are: Armstrong Steel for reinforcing steel; Karvo for asphalt; Miller Cable for highway lighting; RAR Contracting for concrete delivery; Follow the River for SWPPP inspection and erosion controls; A&A Safety for maintenance of traffic and striping; M.P. Dory for traffic signs and sign supports; and Lake Erie Construction for guard rail. Stupp Bridge fabricated the new steel girders, and they were metalized and delivered to site by Ohio Structures.

The work site is close to Ruhlin's shop and mechanics are sent in as needed to deal with typical wear and tear issues. 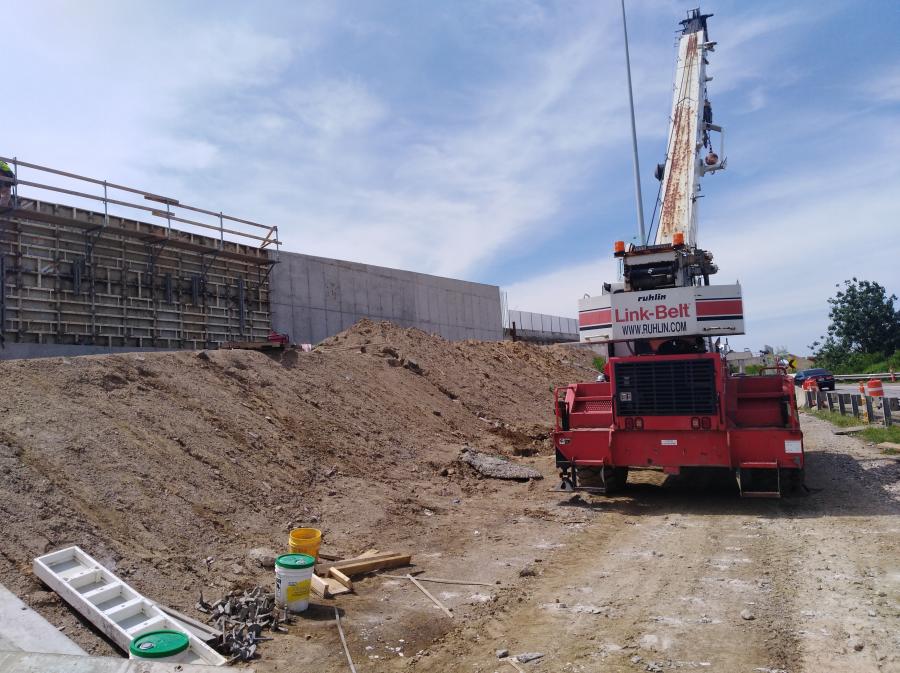 The crews are using Link-Belt 218 and 138 crawler cranes for pile driving; an I-19 pile hammer; Cat 336 excavators, one of which is equipped with a Movax SP100 steel pile installer; a Komatsu PC228 excavator; a Cat D6 dozer; and a Volvo L120 loader.

“We'll be renting large hydraulic cranes for the steel erections and demolitions,” said Myers, “including a Liebbherr LPM 1400 crane to erect the center drop-in girders for the bridge.”

The cranes will be rented from Maxim Crane Works.

Other projects in the Urban Core program include the Opportunity Corridor and Lakefront West initiatives.