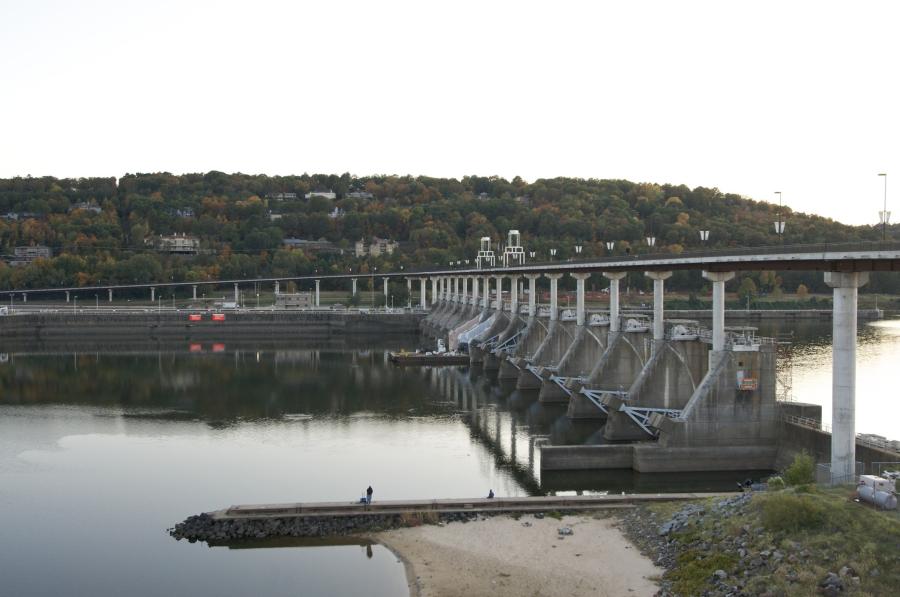 The Murray Lock and Dam is part of the McClellan-Kerr Arkansas River Navigation System. Recent legislation will open up $250 million in non-highway formula funding for Oklahoma to use for MKARNS and will allow Oklahoma and Arkansas to jointly apply for federal freight grants that will total more than $5 billion in the five years following the enactment of this legislation.

U.S. Sens. Jim Inhofe (R-Okla.) and John Boozman (R-Ark.), along with Govs. Kevin Stitt (R-Okla.) and Asa Hutchinson (R-Ark.), announced provisions in America's Transportation Infrastructure Act that outline the future for modernizing the McClellan-Kerr Arkansas River Navigation System. These provisions will open up $250 million in non-highway formula funding for Oklahoma to use for MKARNS and will allow Oklahoma and Arkansas to jointly apply for federal freight grants that will total more than $5 billion in the five years following the enactment of this legislation.

"The future of MKARNS is more than just deepening an existing waterway," Inhofe said. "Providing new funding opportunities to deepen and modernize MKARNS will empower future economic development and expand agriculture exports and oil and gas development in our state. I'm proud to have authored provisions that would bring the MKARNS into the next generation and would allow the more efficient movement of goods across all modes of transportation by relieving congestion and reducing wear and tear on highways and bridges."

"Oklahoma is home to the furthest inland warm-water port in the nation, and countless Oklahoma jobs, economic opportunities and agriculture exports are tied to the Port of Catoosa, the Port of Muskogee and the MKARNS," Gov. Stitt said. "Senator Inhofe and Senator Boozman are working to give our state the tools to use federal freight funding and INFRA grants to modernize MKARNS and expand its impact across our great state. This is a critical infrastructure priority that will continue to grow Oklahoma and expand opportunity for economic diversity. I appreciate the visionary leadership of Senator Inhofe and the collaborative efforts with our neighboring state as we make significant progress on expanding MKARNS."

"Expanding opportunities to fund improvements to the MKARNS is a key factor in leveraging its full economic potential," Boozman said. "For far too long, the MKARNS has been operating under a critical backlog of much needed modernizations. Our changes will provide the MKARNS with a number of new funding outlets that were not previously available to this important project. I appreciate Senator Inhofe's leadership and support of our inland waterways, and I will continue to advocate for innovative solutions that address our water infrastructure needs."

"This is great news for Arkansas and the future of the McClellan-Kerr Arkansas River Navigation System," said Gov. Hutchinson. "The MKARNS is one of our state's most valuable economic assets, and I appreciate the leadership of Senators Boozman and Inhofe for leading the effort to include these important provisions in the Highway Bill."

Inhofe and Boozman authored an amendment that was accepted during the committee mark-up that would allow Oklahoma and Arkansas to apply for federal discretionary grant funding to modernize and deepen MKARNS. Additionally, Inhofe authored a provision in the legislation that will allow states to use their federal freight formula funding on waterway projects if needed or desired, making it possible for federal resources to be used for modernizing and deepening federal waterways, like MKARNS.

Expanding the ability of states to direct freight funding and apply discretionary grant funding does not diminish the importance of federal resources for highways and bridges. Rather, it substantially improves the movement of freight along recognized transportation corridors more efficiently, relieving congestion and wear and tear on our nation's highways, allowing federal dollars to get more mileage. For each barge on the river, 62 semi-trucks are off the roads.