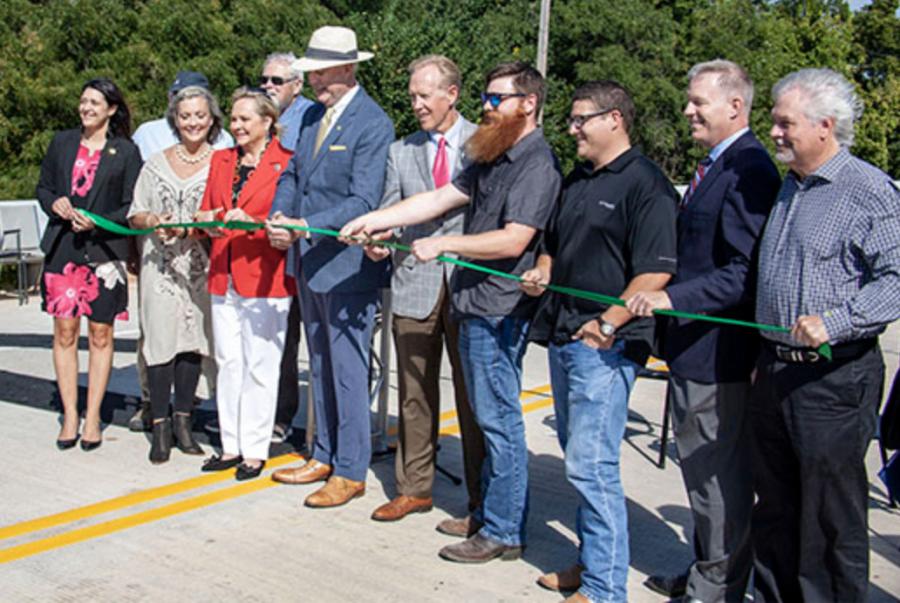 Officials held a ribbon-cutting ceremony on the newly constructed MacArthur Blvd. bridge in Deer Creek. As part of the County Improvements for Roads and Bridges program, this bridge replacement was crucial to combating flooding in the Deer Creek area. (ODOT photo)

Highlights of the Oklahoma Transportation Commission's meeting Oct. 1, include an update on the Driving Oklahoma Working Group's involvement with autonomous vehicles, federal grants to regional transit agencies, a county bridge ribbon cutting and an update on federal funding. In addition, projects were approved to install sidewalks in Yukon; rehabilitate a bridge on U.S.-270 over U.S.-270B in Shawnee; and highway reconstruction and bridge replacement on U.S.-64 near Cleveland.

Mike Patterson, Oklahoma Department of Transportation executive director/secretary of transportation told the commission that autonomous vehicles are in the near future. The Driving Oklahoma Working Group is a partnership exploring policies and safety of these vehicles.

“As we look to the future on what to expect and what we need to change, we want to be ready for whatever is coming in the autonomous vehicle arena — that would be state statutes, municipal ordinances and the like,” Patterson said.

Nearly $3.9 million of the funds were distributed to rural Oklahoma transit agencies to purchase new or replacement vehicles (vans, minivans and buses), plus cameras and radios. Almost $407,600 of the grant funds will be used to complete bus maintenance and operations facility upgrades at two of the agencies, one of which also received funds to buy vehicles.

He also updated the commissioners on President Trump's recent approval of a continuing resolution budget bill to extend federal funding to DOTs through Dec. 7. While this will provide funding to several projects in future lettings, it is a temporary fix until the federal budget is signed in the spring.

Also mentioned was a ribbon cutting for a county project on MacArthur Blvd. in Deer Creek. As part of the County Improvements for Roads and Bridges program, this bridge construction was crucial to combating flooding in the Deer Creek area and is the result of a vital partnership between the county and the state. Gov. Fallin and transportation officials attended the event.

The Commission voted to award a $780,000 project to construct nearly 2 mi. of sidewalks at various locations in Yukon, including along Route 66; a $1.86 million project to reconstruct the U.S.-270 bridge over U.S.-270B in north Shawnee; and a nearly $14 million highway reconstruction and bridge replacement on U.S.-64 near Cleveland in Pawnee County.

A list of all awarded contracts may be found by visiting odot.org/contracts, selecting the September 2018 letting, clicking Go, then Award.

The eight-member panel, appointed by the governor to oversee the state's transportation development, awards project contracts for road and bridge construction every month. The commission's next meeting is scheduled for 11 a.m. on Nov. 5.