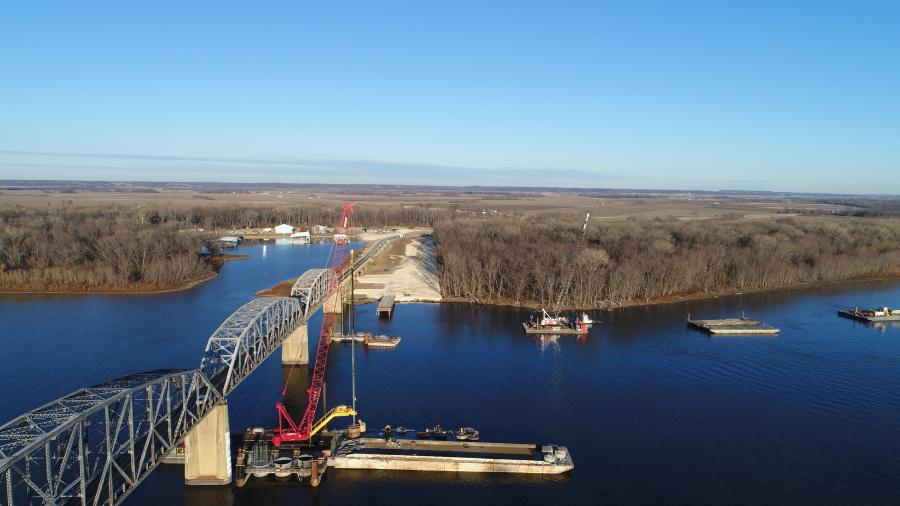 The $68.2 million project is a collaboration between the Missouri and Illinois departments of transportation, MoDOT and IDOT, respectively.

The mighty Mississippi River has long been regarded as a dividing line between the American East and West. Flowing south from its headwaters in Minnesota, the 2,320-mi.-long river almost splits the country from north to south all the way to the Gulf of Mexico south of New Orleans.

In the 19th century, when settlers from the east made the arduous journey out west, the only method to traverse the often wide and swift-moving river was to use ferries. Due to the unpredictability of the river, ferries proved a hazardous way to cross the Mississippi.

Thankfully, engineering technology advanced to the point that steel and iron bridges could be built over the river and, beginning in 1855, hundreds of spans were constructed.

Many, of course, have since been demolished and replaced, having outlived their usefulness and safety standards.

One ancient bridge along a remote — yet vital — highway between Missouri and Illinois is finally nearing retirement with a new replacement currently being built.

Louisiana, Mo., is a 200-year-old historic village of about 3,300 people located 25 mi. southeast of Hannibal (hometown of Mark Twain) and 73 mi. northwest of St. Louis.

It is home to the 90-year-old Champ Clark Bridge, a narrow span that carries U.S. Highway 54 over the river from Louisiana into the rural farmlands of Pike County, Illinois. The bridge is named for James Beauchamp Clark, an early 20th century Missouri State Speaker of the House.

The new Champ Clark Bridge, set to open in Fall 2019, will sport a simple, elegant design and span more than 2,200 ft. of the Mississippi between the two states, just a short distance south of the old structure.

In contrast to the old Champ Clark Bridge currently in operation, the new span will provide motorists and truck drivers with a safer and wider ride — more than double the lane and shoulder width, in fact.

The $68.2 million project is a collaboration between the Missouri and Illinois departments of transportation, MoDOT and IDOT, respectively. St. Louis-based Massman Construction, specializing in heavy civil and marine engineering, is the prime contractor.

The original Champ Clark is a five-span truss bridge with only two narrow 10-ft. lanes and no shoulders for traffic moving east-west. Add to that fact almost 4,000 trucks and cars use the bridge every day, and it is apparent the old structure has reached the end of its operational life.

With that in mind, the designers of the new bridge have planned for it to have a width of 44 ft. with two 12-ft. driving lanes and twin 10-ft. shoulders.

They also promise a 100-year deck life, wider navigational spans and a lower maintenance requirement than the old structure.

Adding to the desperate need for a replacement span along U.S. 54 is the fact that it is the only highway bridge between Hannibal and St. Louis.

Besides providing local motorists with a more reliable bridge between the town of Louisiana and the Illinois side, a new Champ Clark also will make it easier for emergency vehicles to respond to accidents, as well as to traverse from one state to the other.

“It's a 90-year-old bridge and every day that it functions properly is a great day,” said Brandi Baldwin, deputy director of the project for MoDOT. “We knew we needed to continue connectivity between the states of Missouri and Illinois, so we worked hard to get this bridge designed, approved and under way. The old one is functionally obsolete at this point.”

Since its construction, the old Champ Clark bridge has undergone many repairs and rehabs, including the replacements of rivets and the installation of new steel and supports, that have kept it operating.

And although the deck has problems, Baldwin added that the bridge is still safe to use and is maintained on a regular basis.

“The bridge old piers are actually in the best condition,” she said. “Each time the Champ Clark is inspected, it receives a passing grade.”

Prep work on the replacement bridge started last April with core drilling on either side of the structure.

After an official groundbreaking in September, crews began the first part of the project with a goal of improving the intersection of U.S. 54 and Missouri Route 79 near the western approach to the bridge in Louisiana.

There, the intersection was made more reliable and easier for trucks to use, Baldwin said. Better lighting, as well as new curbs, gutters, paving and striping were also installed by mid-November.

With that complete, the heavy-duty work commenced on the project, according to T.J. Colombatto, project manager of Massman Construction. 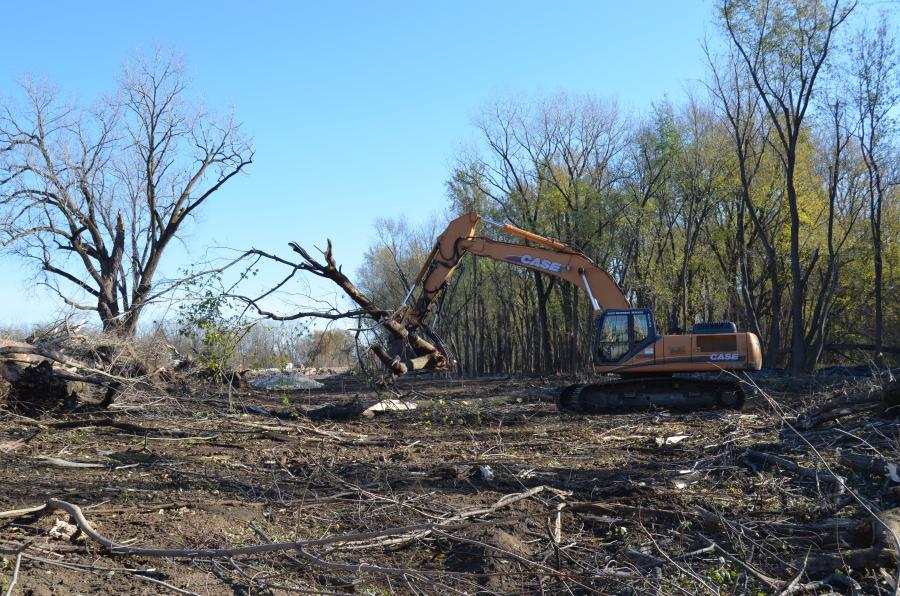 Trees were cleared on the Illinois side of the river and work began on a new embankment for the U.S. 54 roadway approach to the new bridge, located just south of the old Champ Clark.

Time for the Big Cranes

Winter should not be an impediment to the work schedule, Colombatto predicted.

Indeed, crews have been drilling shafts in the river for the last few months despite large sections of ice all around the work platforms.

For instance, in December, the Manitowoc 999 crane was used to position the rebar cage for the north shaft at pier 4. Then, the 2250 crane and a drill rig were working on the south shaft of pier 4. 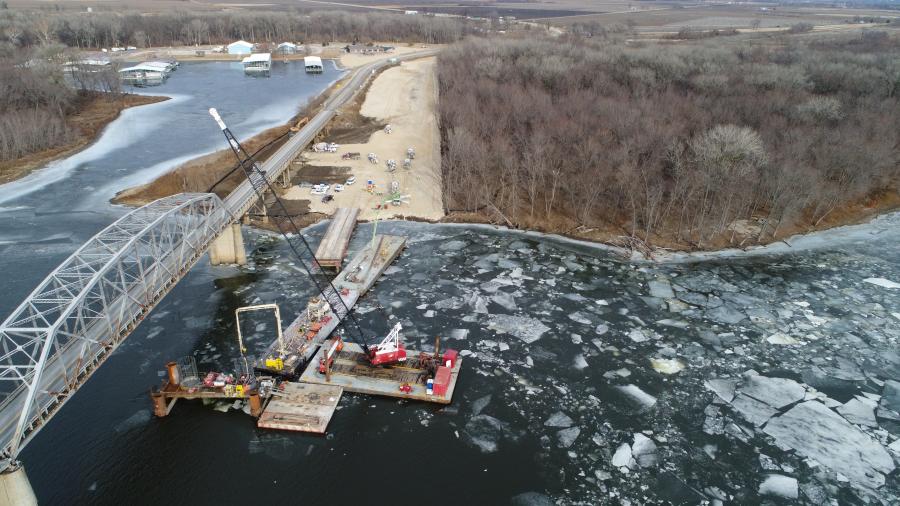 By January, with ice floes all around, the Manitowoc 4100 crane was used to manage the tremie pipe for the drilled shaft concrete pour at the south shaft of pier 5. />

“We are also using a temporary bridge structure, like a dock, that extends into the Mississippi from the Illinois side,” Colombatto said. “It is not being used for drilling shafts, but for material deliveries and the concrete pours.”

“Today [Jan. 19], it is fairly-warm, so we are pouring concrete directly onto pier 4,” Baldwin said. “It is too far to reach for pump trucks, so we are hauling that concrete in via barge.”

Colombatto figures that the entirety of 2018 will be a busy time at the new Champ Clark site, with more work coming on line as the weather warms. He expects 50 or 60 people working at the peak.

“In the next six months, we will finish up the drilled shafts and build the river-pier substructures,” he said, “before driving piles for the bents on land and finishing up the embankment on the Illinois side. After that, we will also construct a retaining wall on the Missouri side.”

The latter half of the year will see Massman and its crews erect the steel superstructure of the bridge and start on the deck.

“One thing they are doing that is interesting and different than on most standard bridges is that pre-cast deck panels are being brought in, which will move the project along a bit quicker,” Baldwin said. “They are being made and transported in by truck from the St. Louis area.”

In 2019, according to Colombatto, the road decks and barriers, as well as all the bridge finishes, will be completed as the new Champ Clark Bridge closes in on its opening day.

At that point, his company will oversee the demolition of the old bridge and the removal of its five piers (a sub-contractor will handle the job of using explosive charges to bring down the superstructure).

New road approaches are needed on both sides of the Mississippi because crews will keep the old bridge and roadway approaches open to traffic throughout most of the construction, Baldwin said. The new road embankment in Illinois is designed to help control flooding where U.S. 54 runs through bottom land near the river.

Although Baldwin grew up nearby and works in the area, she knows how important it is for the people of the area to finally see a replacement for the historic old Champ Clark Bridge.

“It has lived a full life and is now ready for pasture,” she said.