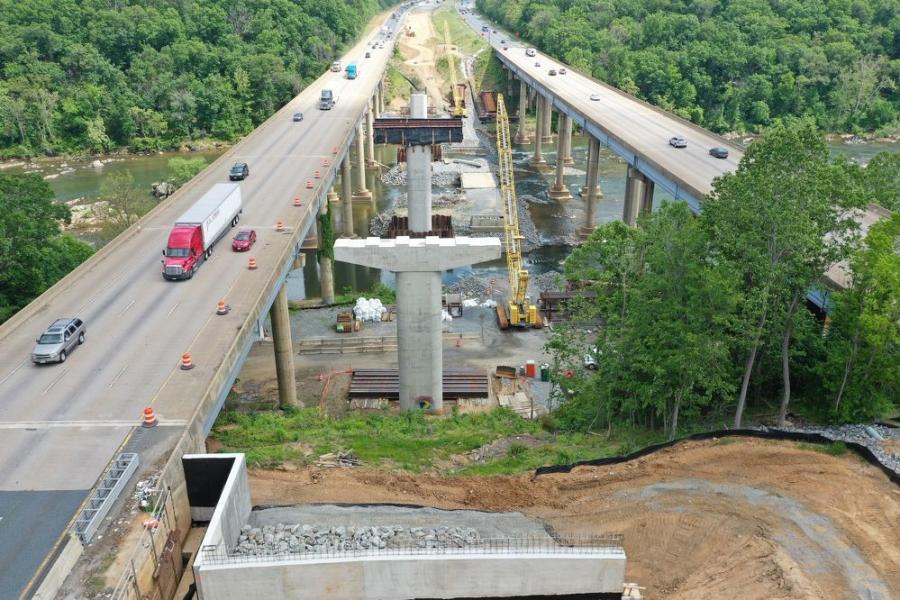 A view from behind Abutment A backwall, looking north.

When one of America's major highways undergoes an expansion and improvement project costing hundreds of millions of dollars, chances are that a sizable number of people will be affected.

That is certainly the case in Fredericksburg, Va., where work is well under way on the second phase of an upgrade to a portion of Interstate 95, one of the busiest freeway corridors in the country. Not too far away, northbound I-95 enters the heavily traveled Washington-Baltimore area, before passing through Philadelphia, Newark, New York City and Boston.

Last spring, Wagman Heavy Civil Inc., a Pennsylvania company with a Virginia office in North Dinwiddie, was awarded a Virginia Department of Transportation (VDOT) design-build contract worth $107.5 million to construct the I-95 Northbound (NB) Rappahannock River Crossing (RRC) project through Fredericksburg. If all goes as planned, the project is scheduled for completion in May 2024. 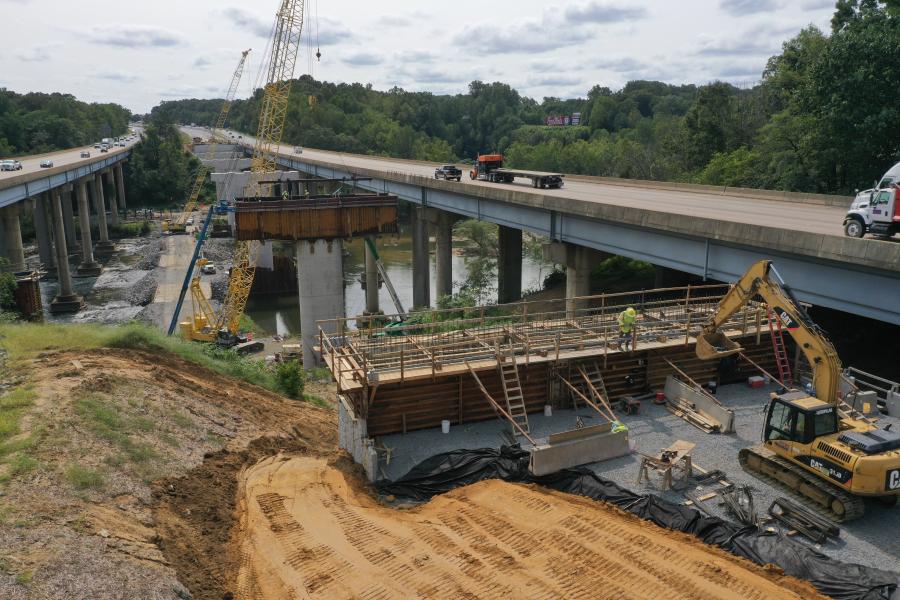 The site of the work is a vital chokepoint for cars and freight trucks moving both north and south along the East Coast — so important, in fact, that Wagman is concurrently working to expand I-95's southbound lanes, as well. That segment of the project includes erecting a new 1,200-ft.-long Rappahannock River bridge for the freeway, work that the contractor has been performing since 2019 as part of a separate $114 million contract. It is set to be finished in May 2022.

The main goal of each of the I-95 RRC projects is to lessen the traffic congestion endemic to the area by spreading out the nearly 150,000 vehicles that make the river crossing by adding three new general-purpose lanes and converting existing lanes into collector-distributor roadways. VDOT projects that the plans will double I-95's lane capacity.

The I-95 RRC's collector-distributor lanes are being designed specifically to allow for local traffic moving between Fredericksburg's Virginia Route 3 (I-95 Exit 130) and the next interchange, U.S. 17 (Exit 133), across the Rappahannock River in Stafford County, without having to merge onto the interstate's through-travel lanes. To facilitate that, Wagman's contract with the state calls for a complete rebuild and reconfiguration of the I-95/U.S. 17 interchange to better consolidate it with the interstate lane expansion.

Both I-95 RRC projects will ultimately connect with the Fredericksburg Extension, known as "Fred Ex," which picks up where the 95 Express Lanes currently end 10 mi. further north toward Washington. That enterprise also is under construction and projected to be complete and open to traffic late in 2022.

In the end, VDOT hopes all the new bridges, lanes and ramps will add up to less gridlock through the critical I-95 corridor.

Wagman Heavy Civil first put shovel to dirt on the I-95 Northbound RRC project this past October.

Glen K. Mays, vice president and general manager of Wagman's Virginia operations, said the highlights of the I-95 Northbound RRC project include the construction of another new, 1,200-ft.-long bridge over the Rappahannock River, like its twin just to the west, along with 4.7 mi. of collector-distributor roadway and three new travel lanes totaling 2 miles in length. These lanes are being built parallel to the existing northbound lanes in the median.

Each of the older I-95 bridge structures over the Rappahannock have been incorporated into the new project's overall design, Mays said. Rather than demolish them, they will instead take local drivers along the collector-distributor lanes between the VA Route 3 and U.S. 17 Interchanges, while the new southbound and northbound bridge structures will carry through traffic via the new general-purpose lanes. 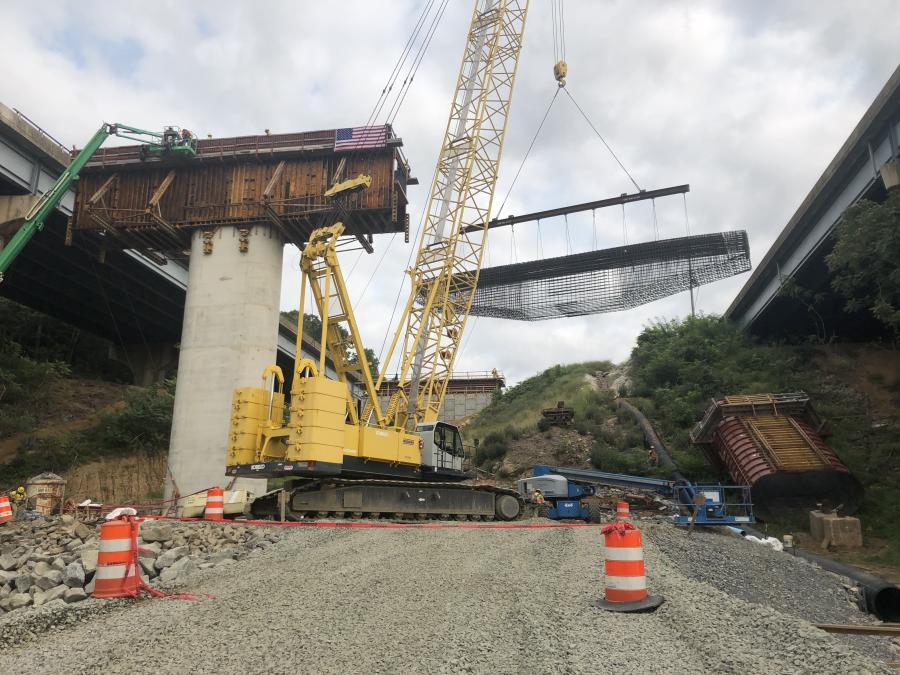 "The existing bridges were built with the original Interstate and later widened to accommodate three lanes of traffic," said Mays, who also serves as the Design-Build project manager of both I-95 RRC projects and is the liaison to VDOT. He added that the state agency "is planning to perform maintenance on the existing northbound Rappahannock bridge as soon as we switch traffic to the new bridge and close the existing bridge temporarily to traffic as part of our project phasing."

Mays said that it is important to note that the rebuild of the I-95/U.S. 17 interchange also is a key element of the overall enterprise.

Among the new features to be built at the interchange are:

Wagman Heavy Civil is utilizing the expertise of its Geotechnical Construction Group to self-perform all its support of excavation (SOE), pile driving, tiebacks and foundation work to include cofferdam construction at the site of the river bridge construction, according to Mays.

"That work has been completed on the I-95 SB RRC project, apart from the last collector-distributor lane bridge over U.S. 17 where we are currently driving piles for foundations at the abutments," Mays said. "These same tasks will be done on both the northbound Rappahannock River bridge and the replacement bridge over U.S. 17. 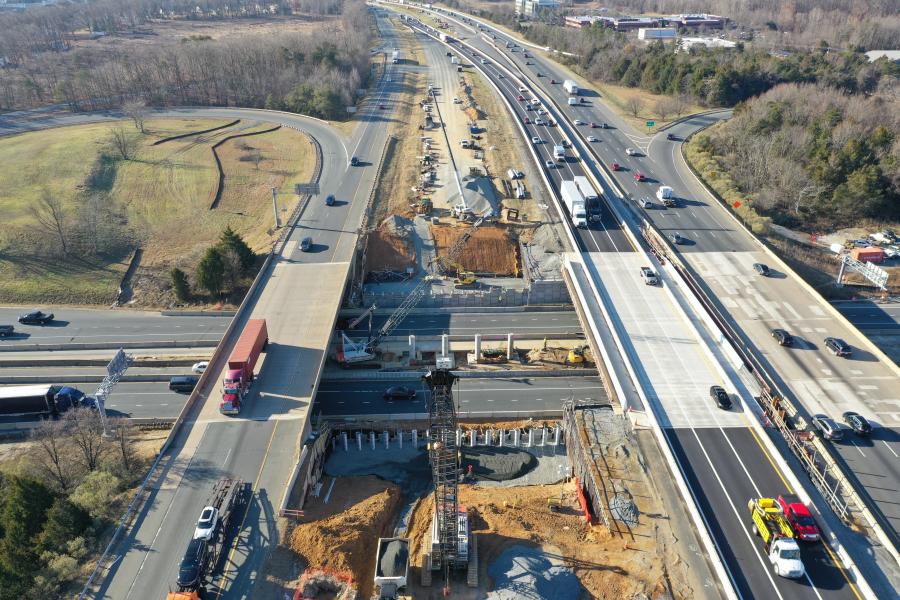 "Having the ability to self-perform this work improves efficiency, mitigates risk with variable subsurface conditions, and eliminates potential delays to the project schedule. [We perform] all our bridge deck grooving and grinding (if necessary). Doing that work in-house also controls costs and ensures a high-quality final riding surface."

A rock causeway was built next to the southbound I-95 bridge during its construction to allow for a more efficient build, Mays said. Soon, though, it will be modified and shifted downstream approximately 50 ft. to accommodate work on the northbound bridge structure.

"The temporary bridges we use allow for the flow of the water to minimize impacts from the causeway on recreational river users and wildlife," he said. "Also, these structures were designed by our in-house engineers to enable the movement of the heavy cranes needed to erect the structural steel."

Currently, Mays said, Wagman and his team are in the first of four construction phases on the I-95 NB RCC project.

During the 2021 construction season, the main emphasis will be on completing work north of U.S. 17 to allow for tie-ins to the Fred Ex roadway. Substructure work also will begin this year on the northbound bridge over the Rappahannock River. 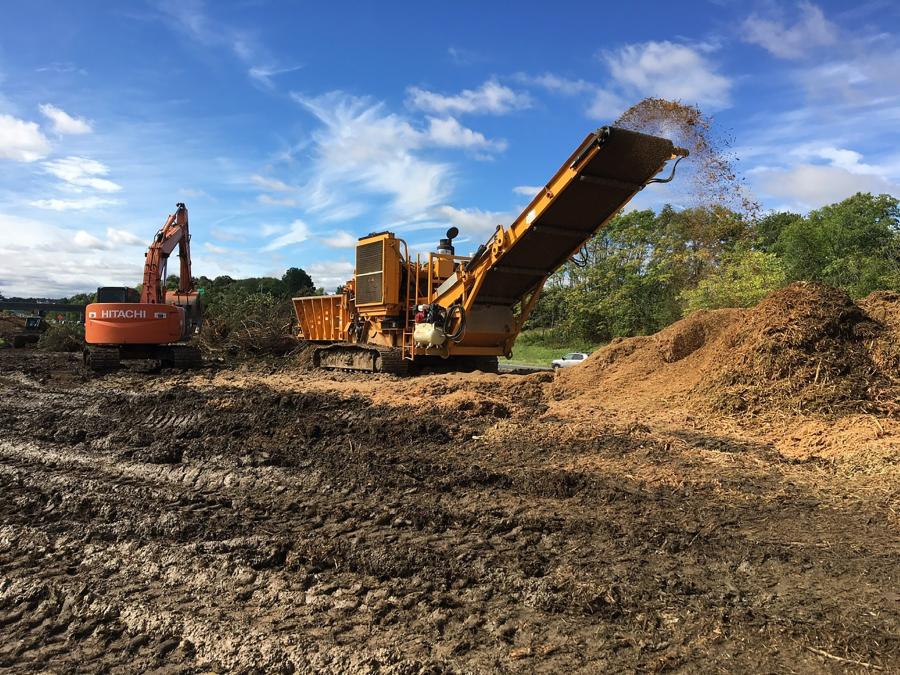 "The Wagman team's design for each of the new I-95 Rappahannock River bridges was unique in that we lined up our new bridge piers with the existing ones, improving hydraulics and limiting river obstacles," he said. "We utilized a special cross slope to reduce drainage needs across the new structures, and we removed the vertical curve along the bridges to help with drainage. We also relocated the new northbound bridge to be immediately adjacent to the southbound bridge, which will improve long term maintenance, safety, and constructability of the northbound bridge."

He added that Wagman's ongoing I-95 northbound design has eliminated a pair of retaining walls and will include plans for top-down construction of a new retaining wall along collector-distributor lanes near the I-95/VA Route 3 interchange. Those plans are aimed at protecting an existing sound wall from being undermined during the overall project.

The remainder of the I-95 NB RRC work this year will concentrate on completion of the design and right-of-way acquisition, Mays said. During peak construction, between April and October, Wagman will have approximately 120 employees working on both the northbound and southbound I-95 projects, which will include both bridge and civil work.

"To date, the most difficult challenge on the two projects is working within the existing interstate footprint while maintaining traffic through one of the most congested and dangerous corridors in the U.S," Mays said.

Expert Subs Brought to the Rappahannock

The prime contractor lined up an impressive team of subcontractors for the I-95 Northbound RCC, most of whom have also been working on the interstate's southbound lanes and river bridge.

The major subs on the project include:

Mays has at his fingertips a set of data that illustrates the scope of the northbound I-95 RRC enterprise.

Right Tools for the Job

Wagman is employing a lot of horsepower on the I-95 NB RCC project, almost all of which it owns. According to Mays, many of the construction equipment pieces were transported from the company's headquarters in York, Pa., to the job site. 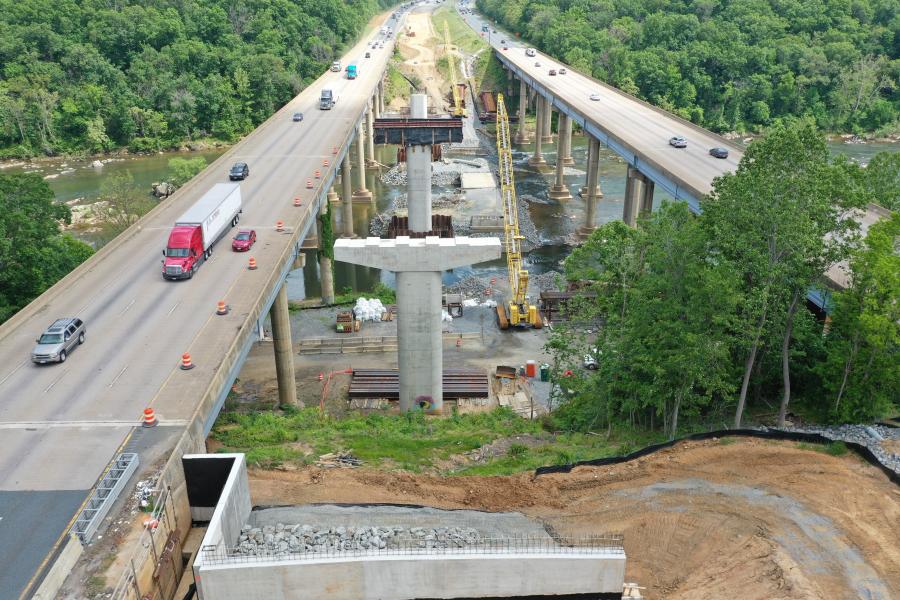 Of course, cranes are always a critical tool for heavy construction contractors building heavy bridges. To erect each of the two new bridges on the northbound I-95 project, Wagman used several different cranes, including the Link-Belt LS-138 80-ton model, as well as the manufacturer's LS-218H II 110-ton, LS-518 150-ton, HC-138A 75-ton and 50T RT machines. They were joined by the contractor's two Kobelco cranes: a CK1600G 160T and a CK2000 200T; and a Terex 35T RT.

Also working around the river-crossing project is a John Deere 650K LGP dozer, along with several Cat models, including a D4G XL, D4K2 LGP, DSK5 LGP, two D6N machines, two D6N-LGPs and a D6K2-LGP. They are joined by two Cat 140H motor graders, plus a Volvo L70H wheel loader and Cat's model 930G, 938K and 950M wheel loaders and several off-road 35-ton trucks to haul much of the excavated material.

Through a separate agreement with the city of Fredericksburg, Wagman improved the access road it is using to move its equipment and materials to the riverbank for construction of the two bridges over the Rappahannock River.

"We made significant changes and improvements to the existing access road by widening it, placing stone upon it, improving the drainage and providing better access for those who use the trail and river for recreation," Mays said. CEG