One of Nation's Oldest Iron Rail Bridges to Be Replaced

To say that the current rail bridge, built in 1875, has outlived its usefulness is an understatement. 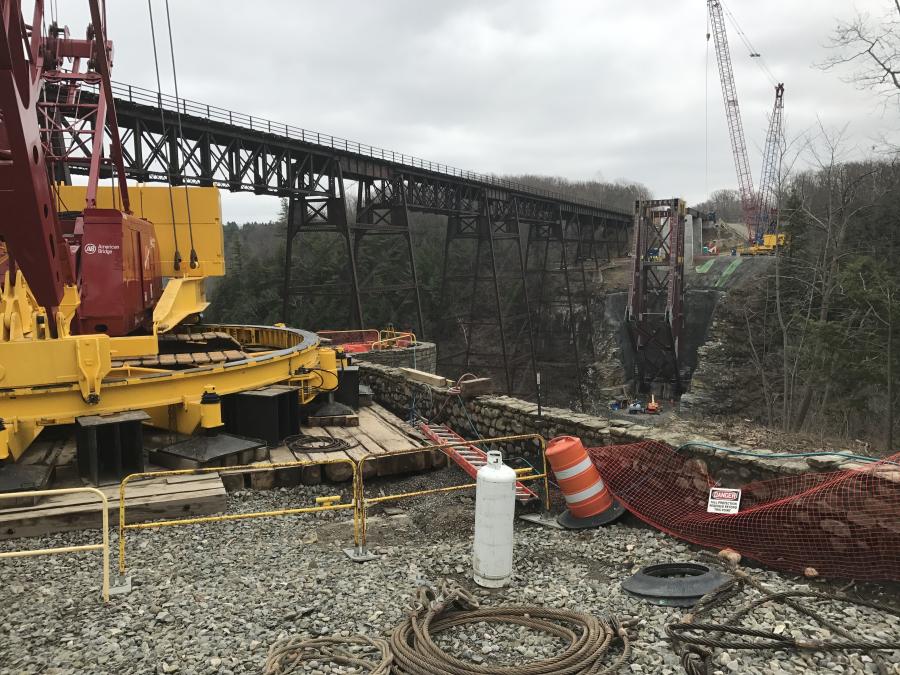 In an effort to remove a longtime transportation bottleneck, crews in Genesee Falls and Portage, N.Y., are constructing a $71 million replacement for the historic Portageville Bridge.(Modjeski and Masters photo)

In an effort to remove a longtime transportation bottleneck, crews in Genesee Falls and Portage, N.Y., are constructing a $71 million replacement for the historic Portageville Bridge in Letchworth State Park. The 820-ft. viaduct, one of the oldest railroad bridges in the United States, can no longer meet the demands of a class 1 heavy-freight railroad, and will be removed upon completion of the new arch span.

“When this project is complete, not only will a critical link in the Southern Tier's supply chain be upgraded, but the views inside the park will be enhanced by an arch bridge that has no physical footprint in the waters of the Genesee River,” said Dave Pidgeon, Norfolk Southern Corporation public relations manager. “It shows the confidence and commitment both the private and public sectors have in the economy of the Southern Tier.

“The current bridge has outlived its usefulness, and trains have to slow their speeds and reduce their weights currently to safely travel across. The new bridge will bring the network up to industry standards. It should also be noted that the current bridge will from time to time attract trespassers, and the new bridge comes with enhancements that will help deter trespassing on railroad property.”

Norfolk Southern, the New York State Department of Transportation (NYSDOT) and the New York State Office of Parks, Recreation and Historic Preservation broke ground on the new bridge in October 2015. The project calls for 8.4 million lbs. of structural steel; 3,800 cu. yds. of concrete and 16,000 cu. yds. of rock excavation. Multiple cranes are also being used.

NYSDOT has contributed $3 million in design costs and has secured $12.5 million of state and federal funding for construction costs. The balance would be provided by the railroad. The funding includes a grant of $2 million from the Finger Lakes Regional Economic Development Council.

The single-track bridge, which will take approximately three years to build, will be located about 75 ft. south of the current iron truss bridge, which spans the Genesee River Gorge. Roughly 1,200 ft. of new track will be constructed on either side of the gorge to align existing tracks with the new bridge.

State Parks Commissioner Rose Harvey said, “State Parks congratulates our partners at NYSDOT and Norfolk Southern on the start of this important economic development project. The new bridge was thoughtfully designed to frame the view of the magnificent gorge for all who visit the nation's favorite state park.”

“The code used to design railroad bridges (AREMA) does not cover bridges of this type or length. It was necessary for us to make project specific design loads and load combinations. Locked in thermal stresses, wind load on double stacked cars and stresses in the arch from foundation settlement were among these.

“This bridge is on Norfolk Southern's Southern Tier Route. All other bridges on this route have been replaced or rehabilitated to carry modern freight loads. This bridge being the last to be replaced makes it the weakest link. It is not capable of carrying the loads Norfolk Southern would like to place on the route. It also requires trains to slow to 10 miles per hour to reduce impact loading. The structure is in such a poor condition that Norfolk Southern performs quarterly inspections to ensure the safety of the existing bridge.”

Modjeski and Masters' work on the project actually began back in 2007.

“We performed all phases of design from conceptual through final contract documents used to build the bridge,” said Johns, who added that rehab simply wasn't an option.

“The main reason was accumulated fatigue damage. While existing members can be strengthened to increase their load carrying capacity, the existing fatigue damage cannot be removed. This would continue costly maintenance that would disrupt rail service. Even if this was acceptable, the cost of strengthening the existing bridge exceeded the cost of a new bridge. This made the rehabilitation alternative impractical to consider.

“With this project, it was necessary to replace the bridge in order to continue safe operations. The challenge was to provide a new bridge that satisfied the needs of the owner and fit in the context sensitive Letchworth State Park.”

“We developed several alternatives that would be appropriate for traversing the gorge. These included a trestle bridge similar to the existing, a two span continuous deck truss and the spandrel braced arch. These alternatives were presented at several public meeting and comments were solicited. The overwhelming majority of responses favored the spandrel braced arch. That concept was developed into formal renderings that depicted the arch bridge overlayed on photos of the project site. These were used by environmental experts to perform a formal visual impacts analysis.”

“It was found that the rock near the surface of the gorge walls was weathered, and did not have the capacity to resist the large loads from the arch buttresses. It was necessary to excavate into the gorge walls to a sufficient depth for competent rock. The main concern was any movement of the arch foundations. Internal stresses in the arch are increased by even small movements of the foundations. We calculated that movements had to be less than 1/8 in. to be acceptable. Golder determined that the foundations would move less than that, and were therefore founded at an acceptable location.”

The current bridge was built using iron. Modern steel and concrete is considered the better choice for the new structure, as they can be more cost-effectively fabricated. The total project length is 819 ft., with a 483-ft. main arch span.

The new arch is expected to continue the tradition of drawing significant tourism to New York State and will preserve the beauty of its scenic location.

“The arch will not obstruct the view of the river valley as much as the existing structure, and will be more visually appealing with the shape of the arch over the gorge,” said Johns.

“One such alternative was the southern alignment that bypassed Letchworth State Park entirely, crossing the Genesee River Valley south of the hamlet of Portageville. When the decision was made to pursue the parallel 75-ft. alignment, the design quickly focused on minimizing historic, cultural and aesthetic impacts to the park, while providing the optimum configuration for unimpeded rail operations. The limits of excavation and associated right-of-way requirements within the park also was a major consideration.”

As for the relocation of Park Road, the High Bridge parking area and the Mary Jemison and Gorge Trails, said Johns, “Perched at the edge of the Genesee gorge and squeezed between bents of the existing railroad trestle, Park Road at the project site was narrow, steep and winding. Once it became evident that the west arch skewback foundation would require the relocation of a portion of Park Road, we were afforded an opportunity to make modest improvements.

“A 90-degree hairpin turn in the road was abandoned, sight distance for both vehicles and pedestrians was improved, the existing cut stone walls were repurposed and a larger parking area was incorporated. The slight reconfiguration of the Mary Jemison and Gorge Trails results in a more visible and safer crosswalk and what should prove to be a more open and accessible viewing area.”

The track geometry design was an important consideration.

“Ultimately, the 35 mph track design speed and the overall project limits were driven by the existing 7-degree curve located within the park just west of the new bridge. Extensive coordination between Norfolk Southern and the State of New York enabled a one-to-one property acreage exchange between the two parties within the park boundaries.”

Norfolk Southern Corporation's Norfolk Southern Railway Company subsidiary operates about 20,000 route miles in almost two dozen states and the District of Columbia, serving every major container port in the eastern United States. It is a major transporter of coal, automotive and industrial products. Johns noted that Modjeski and Masters long relationship with Norfolk Southern has been beneficial during the ongoing construction process.

“It helps in that we are already familiar with the policies, procedures and preferences of the client. When you work for a client for the first time, you have to overcome an initial learning curve, which can take time.”

Construction of the highly-anticipated new bridge is expected to be finished by December 2018.