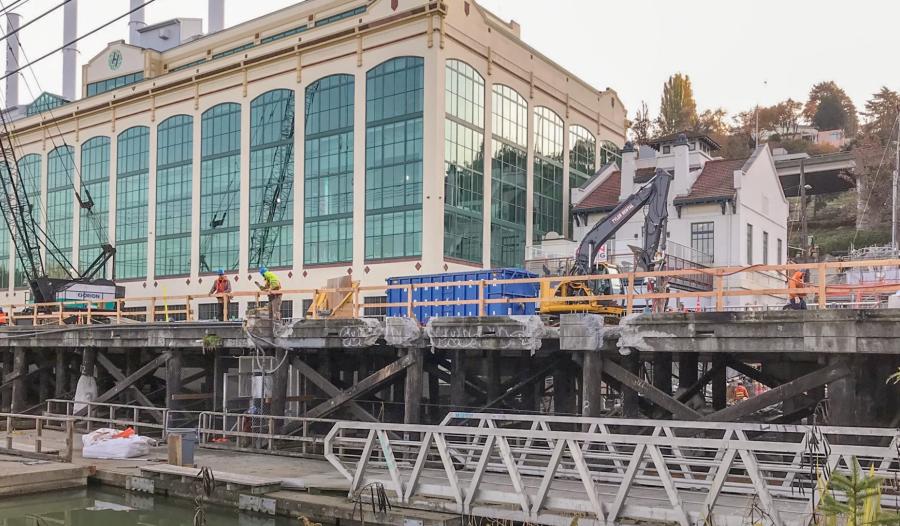 The Orion Marine Group, along with the Seattle Department of Transportation (SDOT), are celebrating the accolades of a job well done.

The awards were won in the Structures category, for facilities built in the $25 million to $75 million division.

"This is a huge achievement for our team on a project that has been a high point in our careers," said MariLyn Yim, SDOT project manager of the Fairview Avenue N Bridge project. "We're all very honored to receive both awards from our peers and to be in the company of so many great and exciting public works projects that were recognized this year. This is why I love doing what I do at the Seattle Department of Transportation and seeing how our work results in tangible improvements for the community and the transportation network. It is gratifying to be able to experience the bridge in person after having seen it in plans and on paper for so many years. People can now use it to watch seaplanes take off, launch kayaks/paddle boards, walk or jog along the Cheshiahud Loop Trail and enjoy the great views. This bridge is beautiful and really encapsulates all the great Lake Union interactions and views Seattle has to offer." 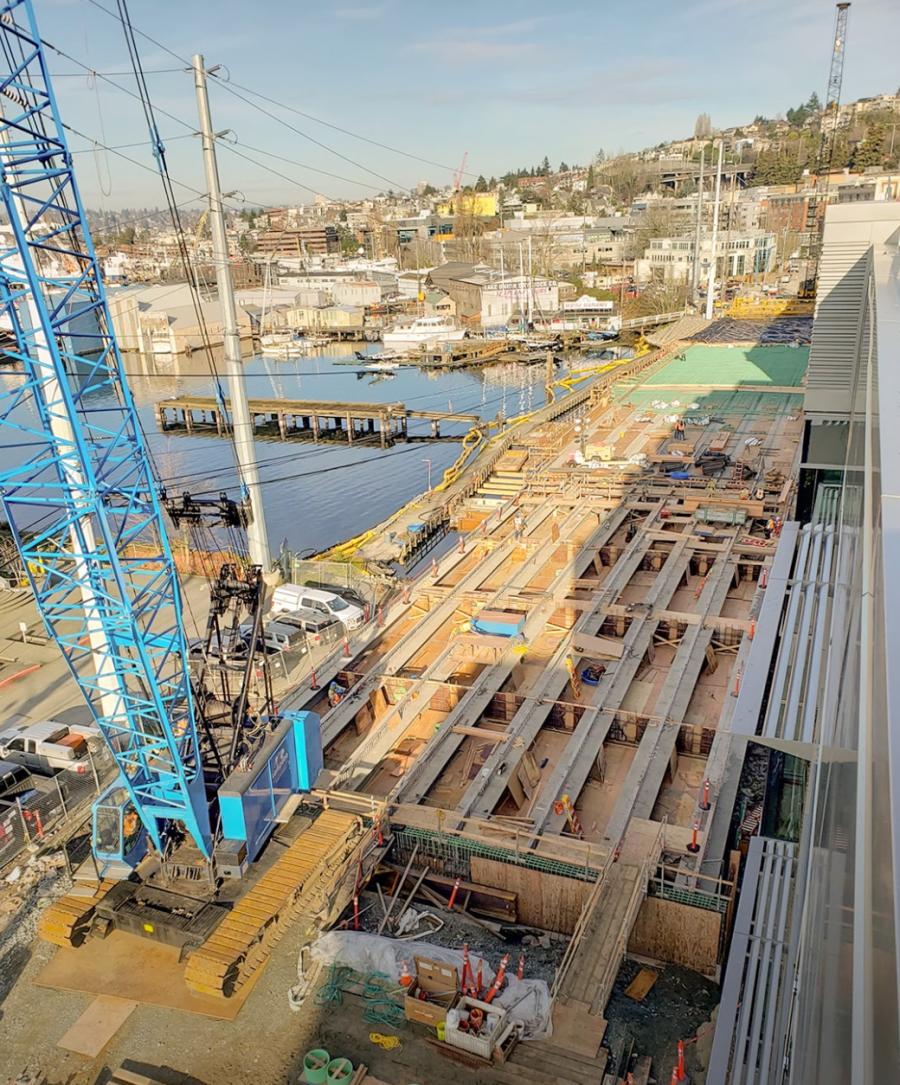 After studies were previously conducted, it was determined that a complete replacement of the bridge was the best solution, but in order to reach the locations to remove the bridge segments, a temporary work trestle would have to be established for the heavy equipment to walk across. To make matters more complicated, the bridge was located adjacent to overhead utilities and a large historic building overlooking the harbor, and the strictest vibration restrictions were in place in order to not disturb the surrounding environment. No impact or vibratory pile installation methods would be allowed.

The contractor needed a quick, noiseless, vibration-free solution that could support the loads of the heavy equipment for the duration of the project, one that could also be removed completely once the task was complete and return the natural surroundings to normal. One solution was the use of helical piles. The contractor turned to Pileworks, who designed a massive 80-ft. long, 22-in. diameter helical pile with a 36-in. diameter helical flight.

"It's awesome for what we're doing in the ground. It's quiet, it's controlled," said Orion Project Superintendent Jason Tarver. "I think it saved us money. It was a substantial savings to drilled shafts."

In addition to seismic and structural safety improvements, the new bridge offers improvements for all residents and travelers alike.

"APWA is honored to celebrate the Projects of the Year awards," APWA President Mary Joyce Ivers said. "The award recipients exemplify infrastructure projects that are planned, designed, constructed and maintained to advance the quality of life for all in their communities. With the challenges of failing infrastructure across North America, public works projects are critical to rebuilding our resiliency and telling our story to support infrastructure funding. Even during the COVID-19 pandemic, our public works heroes continued to deliver on their projects. I am proud and inspired by all of our public works members who continue to deliver outstanding, selfless services to their communities, even in times of a pandemic and emergencies. I am so excited to celebrate these Project of the Year recipients."

The project was funded in part or in full by the 2015 voter-approved, 9-year, $930 million Levy To Move Seattle. The levy provides funding to improve safety for all travelers, maintain streets and bridges and invest in reliable, affordable travel options for the growing city of Seattle.

The bridge was deemed to be structurally deficient and seismically vulnerable and happens to be the last major bridge built of timber in the city, with portions that are older than 65 years.

The bridge replacement was a key citywide project given that Fairview Ave N is a primary north-south artery connecting communities like South Lake Union, Eastlake and University District. 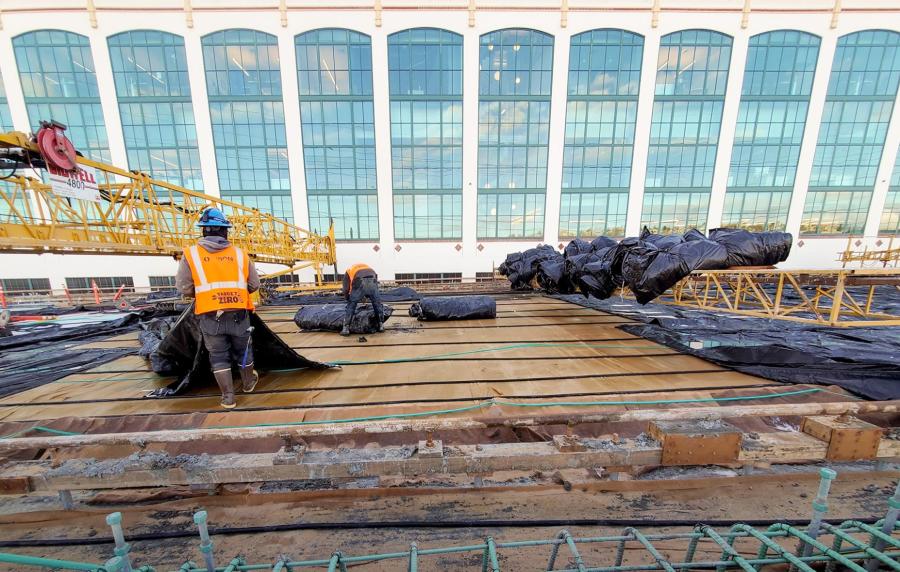 The new bridge restored a critical connection between Eastlake and South Lake Union — the gateways to downtown — and makes it easier and safer for traveling along Fairview Ave N. The bridge is one of the most significant investments of the Levy to Move Seattle tax dollars.

The bridge was rehabilitated in 1986, 1994 and 2003. The 1986 rehabilitation included repairing spalls on the beams and cleaning the beams. The 1994 rehabilitation consisted of replacing two concrete box beams, their respective bearings and replacing the roadway joints.

"The beauty of the Project of the Year Awards is that they highlight the amazing collaborative efforts to build and rebuild America's infrastructure," said Scott D. Grayson, CEO of APWA. "Every year, I am amazed at the innovation and vision the award recipients share to improve quality of life for the public."