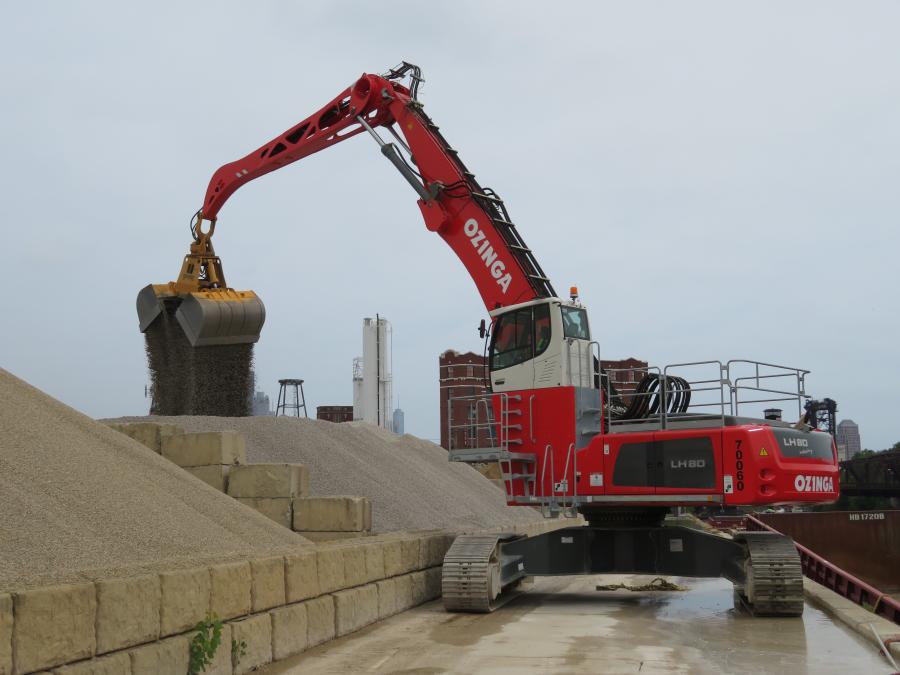 The operator of the Liebherr LH-80 material handler unloads material at the Ozinga Chinatown plant.

For nearly 90 years and five generations, Ozinga has been supplying the Chicago area and beyond with ready mix concrete and other materials.

Founded in 1928, the company weathered the Great Depression and WWII to become the Midwest's premier supplier of concrete and materials, according to Paul Ozinga, executive vice president of Ozinga's ready mix operation in Chicago, Ill. Today, Ozinga is a fourth generation owner and works with his five brothers and his cousin to continue the company's and his family's legacy.

Ozinga said he was always interested in the family business — driving end loaders and batching concrete while he was still in school. So, after graduating from Middle Tennessee State University with a degree in Concrete Industry Management, he moved back home to help run the business and has been at the forefront of its expanding lines.

In addition to the company's primary ready mix concrete business, Ozinga also has added complementary operations, including mining sand and gravel. The company also barges its own material. Over the years, Ozinga's footprint has grown to include Wisconsin, Indiana, Michigan and South Florida.

Due to the expansion of its barging business, Ozinga recently purchased a Liebherr LH 80 material handler from Finkbiner Equipment. The machine is currently hard at work in downtown Chicago.

“At our Chinatown facility, we unload anywhere from three to five barges a day, primarily sand and limestone,” said Ozinga. “We chose the Liebherr LH 80 because of its fuel efficiency, its ability to carry a heavy load and its low maintenance overall.”

“In an urban environment, where square foot cost is very important, you are somewhat limited. You only have so much seawall space where you can stage a barge. We needed a piece of equipment that could carry a heavy payload, and at the same time, be very efficient with minimal downtime and minimal maintenance. We chose Liebherr because it gave us the ability to empty barges in a timely manner. It's such a high demand market with expensive river frontage, so we need to move material constantly to make it happen. The Liebherr machine provides us that opportunity.”

Ozinga said the Chinatown facility has the most traffic, but the company has another facility on the north side of Chicago, which also is on the river.

“We are even more limited with seawall space and capacity up there, but in the river system that services Chicago, I would say there are about six river locations that we offload to meet the city's needs,” said Ozinga.

According to Ozinga, one of the main selling points of the Liebherr LH 80 material handler was the ERC System (energy recovery cylinder), which is located under the boom of the material handler. When the operator lowers the boom and stick, the energy recovery cylinder creates more power in the lift circuit. Thus, when the operator lifts a load out of a barge, the machine uses the compressed nitrogen to lift up on the boom, which creates more power and uses less horsepower. As a result, the Liebherr LH 80 material handler uses a lower horsepower engine, which is a much more fuel efficient motor.

“As a company, we believe that we are stewards of what we have been given, so we are always looking for opportunities to reduce our consumption of anything,” said Ozinga. “The ERC System was kind of a no-brainer to us to reduce our fuel consumption.”

Another no-brainer was the decision to go with Finkbiner for the purchase of the Liebherr LH 80 material handler, according to Ozinga.

“Throughout the whole process, Finkbiner was top notch,” he said. “They were very quick to deal with anything that came up and answered any questions we had about the machine. They also offered the opportunity to go look at a machine in action before making such a big purchase, so we were able to work closely with them to customize the machine to our needs. Finkbiner has a wealth of knowledge when it comes to understanding our industry and figuring out exactly what we need. They were able to put the pieces together and come to a budget where we were able to get the job done. We are very happy with them.”