Pace Construction Improves Route 141 at I-44

The design-build project, which began in June 2016, has Pace working with AECOM Technical Services Inc., Kuesel Excavating Company, Inc. and the Lochmueller Group. 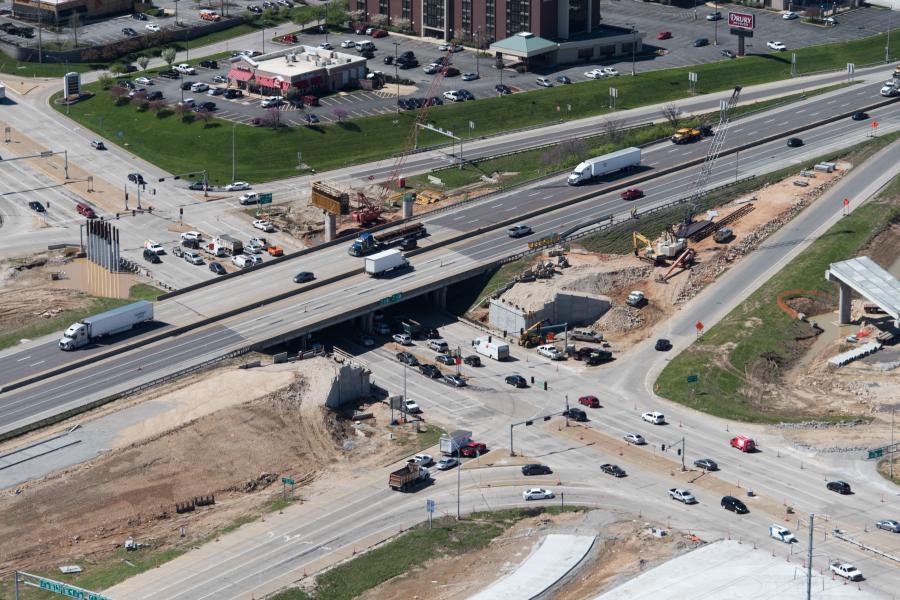 Pace Construction Company LLC and its partners are making good on the July 15, 2018 delivery date for the Missouri Department of Transportation’s (MODOT) $25 million Route 141 at I-44 Improvement Design-Build Project in St. Louis.

Pace Construction Company LLC and its partners are making good on the July 15, 2018 delivery date for the Missouri Department of Transportation's (MODOT) $25 million Route 141 at I-44 Improvement Design-Build Project in St. Louis.

The design-build project, which began in June 2016, has Pace working with AECOM Technical Services, Inc., Kuesel Excavating Company, Inc. and the Lochmueller Group. The project is being funded by MODOT and FHWA.

The project's goals include maximizing traffic flow on Route 141 and improving efficiency at the I-44 interchange and Vance Road intersection, improve driver safety and creating a long-lasting transportation facility that minimizes future maintenance.

In addition, the project will improve left turns to Marshall and Vance Road using signalized ThrU Turns, according to the project web page.

Traffic flow on the busy road is approximately 50,000 cars and trucks daily, and when finished, will improve levels of service on Route 141 through 2038.

“There are several issues along Route 141 near I-44 in Valley Park,” stated the project's web page. “Primarily, the Route 141 corridor is exceptionally congested during morning and evening commutes, especially between I-44 and the Vance intersection. Several major side roads, including Vance, lead to Route 141 near I-44, add to that congestion.

“MoDOT programmed this project back in 2014 as four separate projects to improve the corridor in Valley Park,” said David J. Simmons, P.E., MODOT's project director. “The decision was made to combine all four projects into one streamlined Design-Build project and use a goal driven partnership with the industry to deliver the best possible improvements for the dollars available. We are extremely satisfied with the improvements that were offered by the Pace-AECOM Team.

“The Pace-AECOM-Lochmueller Team really focused project improvements on safety and mobility with their proposal,” he said. “Many motorists experienced heavy congestion and many rear-end accidents at the Route 141 and Vance Road intersection. Since we opened up the new ThrU Turns last summer, traffic flows through the area much better. We have received many positive comments from the community on the new configuration. That should be a testament to the folks in this area as opening up these types of intersections has not always been popular around the country. The Contractor and MoDOT Team worked together in concert keeping key stakeholders informed that lead to a successful opening of the ThrU Turns.

“We are excited to complete the flyover and interchange improvements in mid-2018 that should dramatically increase mobility through the rest of the project limits,” he added. “The new traffic movements and the newly constructed innovative drainage basins should improve mobility during rush periods and during heavy rain events.”

To help secure public input, MODOT established a Community Involvement Group that continues to reach out to community leaders impacted by the project to share information and provide during the construction. The initial meeting was held in July 2015, followed by meetings in March 2016 and last February.

“The community has been huge in helping with the roll-out of the new ThrU Turns,” said Simmons. “Everyone understood the need for something innovative to improve the 12,000 cars per-day that make a left turn from northbound 141 to Vance Road and this improvement is paying off. Pace and MoDOT worked hard to inform the public on the how we would open up the new configuration and the community leaders bought in and helped us get the message out. We've used the Community Information Group approach on projects of high importance, but this group was a tremendous asset to our team.”

The project was designed by AECOM Technical Services.

“The biggest challenge was figuring out how to design and construct the improvements within a confined footprint,” said Kyle Levenhagen, AECOM's design manager. “There were a lot of existing traffic movements that had to be maintained. With congestion already prevalent on Route 141, our team did not want to increase the burden on commuters during construction. This challenged our team to push the limits of what could safely be done in terms of design.

“In the end, the added improvements will help to improve mobility by reducing conflicts with traffic signals. The project also consists of two new bridges, both consisting of precast concrete girders with 75-year service lives. This design has allowed for efficiency in construction as well as ease of future maintenance.”

“This required early communication and partnering with the railroads, utilities and Ameren [the owner of the transmission line], making sure the design team was accounting for any issues raised by one of these stake holders so that it didn't bring the project to a halt. My previous experiences of working with railroads has helped, knowing what to expect from them and what they expected of us.”

“We anticipated a lot of the challenges,” said Loehr, “but one of the issues that made it difficult for us was the major flooding that we really couldn't anticipate — this was a 500-year flood. This required crews, on a Friday and Saturday, to work in the heavy rain to relocate the staging area to higher ground and coordinating with MODOT to relocate our crawler cranes once the roadways where shut down. We were able to relocate all of our equipment in time, but it did shut down the project for several weeks. We made up for those lost weeks by working additional over-time.”

Traffic issues and overall coordination was another challenge for the day and night shifts to hammer out on a daily basis.

“This required the shift superintendents, project engineer, and general superintendent to meet in-between shifts to talk about any setbacks, problems or acceleration on the schedule for the next shift,” said Loehr. “We also needed a good team of subcontractors with us and coordination with MODOT and all the stakeholders. Fortunately, Pace has had many other projects that have required multiple shifts and we have been able to apply the lessons learned from those projects.”

Loehr had sufficient space to set up field offices, material storage sites, and equipment parking areas and due to the closeness to the highway, removing and receiving materials.”

The work site is divided into two segments — the south end flyover and the north end thru turns..

“The winter in 2016 was mild compared to years past and we were able to continue all phases of the project,” said Loehr. “This year thus far has been hit or miss — we recently had to bring in hydronic heating units to allow construction to proceed on the flyover bridge decks.

“Some lessons we brought to this project was that we needed to have a good team of subcontractors that we could rely on to get the work completed but at the same time make sure we completed the project with a diverse workforce and team.”

The number of workers on site varies depending upon the day. Sometimes there can be nearly 15 Pace and subcontractor personnel on-site and others, close to 50.

“We found it key to key to have weekly meetings with the individual subcontractors, as well as a group meeting,” said Loehr.

“We have been able to recycle nearly all of the concrete back into the fills on the project along with returning the asphalt back to the plant for future recycling,” said Loehr. “We try to recycle as many materials as possible and we submitted an Environmentally Responsible Construction Technique Plan for this project.”

Pace's headquarters and home shop is 30 minutes from the work site.

Pace has rented skid steers, trackhoes, and manlifts from Fabick Cat in Fenton and a Terex HC 110 crawler crane from RTL Equipment in Grimes, Iowa.

Loehr noted that the project is on schedule and that on certain benchmarks, is slightly ahead.

“We have a good crew — a solid union work force — and staff,” he said. “We do quarterly partnering events with members of the crew, the owners, and the stakeholders of the project. We're always open to better ideas and we encourage employees to come forth with them.”