“We wanted to be closer to farms and the quiet, single-road neighborhoods,” said one property owner, who believes that the planned commercial development will mean more traffic, more noise, more light 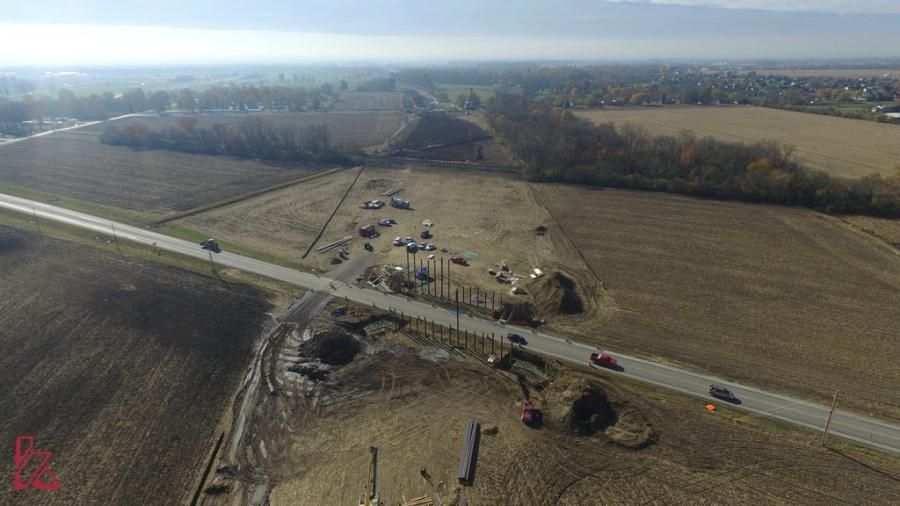 In the weeks since then, significant progress has been made, according to Grant Kleinhenz, Brownsburg’s town manager.

“It’s a simple, straight-forward job, cutting grade through farm fields and connecting roads, with no traffic or utilities to worry about. There are not a lot of street cuts.”

Due to a dry, warm autumn and predictions of an equally mild winter, Kleinhenz expects to reach his year-end goal of finishing the grade crossing over SR 136.

The Ronald Reagan Corridor master plan includes the goal of extending RRP all the way up to I-65 in Boone County, but an alignment has not been defined.

The current project is being built as a five-lane roadway, with two travel lanes in each direction, plus a turn lane. An asphalt walking path will be added on the west side.

Simultaneously, expansion of previously completed sections is beginning. Current finished sections consist of two lanes, but will be extended to the same five-lane design.

“It was envisioned this way 20 years ago,” Kleinhenz said, “but they didn’t have the funds to build it that way.”

Stakeholders in the project, including the race track, hospital and local commercial nodes, all of which are major destinations along the route, insist that there is a need to accommodate present and future transportation demands with more efficient links between three of the county’s biggest towns: Brownsburg, Avon and Plainfield.

Hendricks County is the second-fastest growing county in the state. Its population grew by 37.5 percent between 1990 and 2000, ranking it third in the state for overall population growth and second for rate of growth.

While RRP will facilitate easy north-south mobility, its dual function is to serve as an economic corridor. Kleinhenz anticipates that commercial and industrial development will occur at the interstate interchange area first and more densely due to higher exposure and traffic.

“It will be less impactful south of the interchange.”

He envisions a mix of residential (apartments and condos), racing-related businesses, commercial, retail (restaurants) and offices.

Within the town limits, Brownsburg maintains a $1.2 billion value. Kleinhenz said that over the next 30 years, the corridor will bring an increase of 40 to 45 percent. He expects an added value of $500 to 750 million.

However, he said the town doesn’t want “a one-mile-long strip mall. We want to avoid back-ups and slow traffic like Avon has.”

Furthermore, Kleinhenz said, the planners want to “retain what is Brownsburg: agricultural areas and farms. We want to mitigate negative influences such as lighting, drainage and noise.” But, he warns, “There will be growing pains.”

The Hurt is On

For years, residents in eastern Hendricks County, Indiana, were told not to worry about completion of the last leg of the Ronald Reagan Parkway because the money had run out and it would never be built.

“Funding our portion was a pipe dream,” Kleinhenz said.

Construction estimates were $22 million. “The town didn’t have the funds.

That changed when the town partnered with the county to pay a 75/25 split, respectively, and obtained $10 million in federal funding. Other sources cite an $8 million federal grant from the Indianapolis Metropolitan Planning Organization, leaving Brownsburg to contribute $6.4 million and Hendricks County to pay $1.9 million.

In addition, the towns and county agreed to jointly fund the estimated $10.8 million for widening the existing lanes from CR 300N south to U.S. 36. Brownsburg’s share of the 3.22-mi. (5.18 km) project is 8.8 percent, based on the amount of the road distance in town limits, with the county contributing 23.26 percent.

Brownsburg’s share will be paid for out of Tax Increment Finance, according to Kleinhenz.

“We will have to do an additional appropriation. This is not an item we had enough clarity to put in the budget for 2015. I also thought it would go to bid later in the year and construction would start in 2016, but we were able to get through it [sooner].”

Many taxpayers are wary of the town’s plans to pay for a roadway most of them don’t want. Despite Kleinhenz’s promise to “make it look and feel like Brownsburg,” local residents remain fearful that RRP will forever alter the quiet country character of the area.

Some say it already has. Jokes with presidential references abound. More blunt comments come from angry or disheartened neighbors, many of whom have lived in the area for 40 years.

“We wanted to be closer to farms and the quiet, single-road neighborhoods,” said one property owner, who believes that the planned commercial development will mean more traffic, more noise, more light pollution and more crime.

Agriculture constitutes the largest use of land in the area, comprising 72.2 percent of all land in the county in 1998: approximately 187,118 acres. The agriculture land use category generally includes land that is used for the production of food and fiber, but also includes land used for non-food livestock production such as horses. Agriculture land includes cropland, confined feeding operations for any kind, permanent pasture lands, farmsteads, nurseries and horse training areas. The total agriculture land use in the study area is approximately 2,922 acres, or 65 percent of the total land use.

“I wish it was RIP to RRP,” said another resident. “We moved here because we like the rural, farmland atmosphere, with quiet country roads. If we wanted it to be like Avon, we would have moved to Avon. We chose Brownsburg because it’s a small town with that small town feel. At least, it was…”

The town manager’s stance is: “Change is the only constant.”

Nevertheless, while confessing that RRP will “shift the focus” from downtown Brownsburg to its easternmost edge, Kleinhenz insists the area will retain its rural feel. But when he starts talking about developers buying up residences and property, few believe the rural feel will last long.

Plans call for intermittent berms and landscaping to deflect noise, but, as Kleinhenz said “Traffic is noisy.” Where once the loudest noise (when there aren’t events at the track) was the whiny of a horse, the moo of a cow or a tractor moving hay, now residents will have to contend with the near-constant sound of traffic, much of it diverted from SR 267, which runs through downtown Brownsburg. That route currently handles commuter traffic of roughly 19,000-25,000 vehicles per day, much of which will now shift to the former farmland area.

In preparation for RRP, just a few years ago the town of Brownsburg annexed the land, engaging in a court battle with neighboring Avon to get it.

“We want to control the plan and development,” Kleinhenz said, “so we can make sure we do it the Brownsburg way.”

According to the Master Plan, which obliges “sound land use planning for high-level development, management of road function and establishment of a premier economic address” by using aesthetic treatments and corridor enhancements to transform the 12-mi. (19.3 km) limited-access highway into a cohesive thoroughfare, unifying standards have been determined and access points have been regulated.

Unlike much of the rest of the county, this roadway will not incorporate round-abouts. A signal will be used at CR 400 in order to be consistent with the rest of the interchanges along the road.

Lighting will be used only at intersections and bridges for now.

“The town wanted more, and might add them later,” advises the town manager.

Although Kleinhenz said no decision has been made regarding signage and lighting details, he wants a consistent look and feel with Brownsburg’s other lights as well as the rest of RRP, so it’s likely that standard streetlights with LED heads pointed straight down in order to produce little light pollution will be used. This type of light meets zoning requirements.

The two bridges at I-74 and SR 136 will have enhanced wall treatments, parkway signage visible from underpass, corridor lighting, decorative railing, decorative planters and special plantings.

Another requirement of the project is the protection of environmentally sensitive areas, including bat habitats, wetlands and woodlands, as well as historic sites and structures because these features contribute to the existing local character of the corridor. In addition, natural features are integral to the function of regional systems, according to the master plan.

The plan calls for avoiding development of areas designated as environmentally sensitive or bat habitats. However, Jim Waggoner, street commissioner, acknowledges that many trees where bats nest were cleared to make way for the road.

“Indiana bat law is a big issue,” he said. “You can’t cut trees from April to August; there is no leniency. Federal money makes it more complicated. We almost forgot about it, and really had to scramble to take down trees before April.”

Both he and Kleinhenz insist that they’re trying to preserve as much as possible and protect the natural habitat by leaving some areas untouched.

“We don’t want to clear-cut,” said the town manager. “We like trees.”

Native plant species will be included in naturalized landscape designs to enhance the desired natural character of the corridor and, in combination with earthen berms or sound walls, attempt to alleviate light pollution and provide a noise buffer. But many residents speculate that these efforts will do little to address the damage done to the flora and fauna — and to the peaceful ambiance — by the roadway.

After years of delay, lower than expected bids — by as much as 20 to 25 percent —enabled the project to move forward. Superior Construction, based in Gary, Ind., is the general contractor. “They’re used to doing large road projects,” said Kleinhenz.

“The GC is a bridge contractor; they’re doing the main work,” Waggoner said.

Pilings for the two bridge structures are completed. North of CR 400 there will be one continuous rise and two structures that carry traffic over railroad tracks and SR 136 before it meets up with I-74.

Gradex is doing the dirt work. Currently onsite, Waggoner counts four earth movers, three to four off-road haul trucks, several excavators for storm pipe, six bulldozers and a road grader. Because of undulating terrain, there has been considerable digging and filling. There’s a borrow lake behind the trailer park; they cut from the south end and carry it to the north end.

The borrow lake is a new long and thin retention pond on private property on the southeast side of CR 400, close to the ROW. Kleinhenz said the town is saving money because the hauling distance is so short. In addition to creating some fill onsite, they’ll also be hauling in some fill dirt from other locations.

Open cut of ditches for drainage has begun.

“There’s a lot of storm pipe to lay,” Waggoner said.

Crews also had to install a temporary pump-around at CR 300 to create a channel to divert water while they work.

A decision about an asphalt source has not been made yet, but Waggoner speculates that they’ll likely bring it from a nearby IMI plant. If Kleinhenz’s timeline stays on course, the decision will have to be made soon, because “Ronald Reagan,” as local residents call the roadway, is coming, wanted or not.