Paving in the Extremes 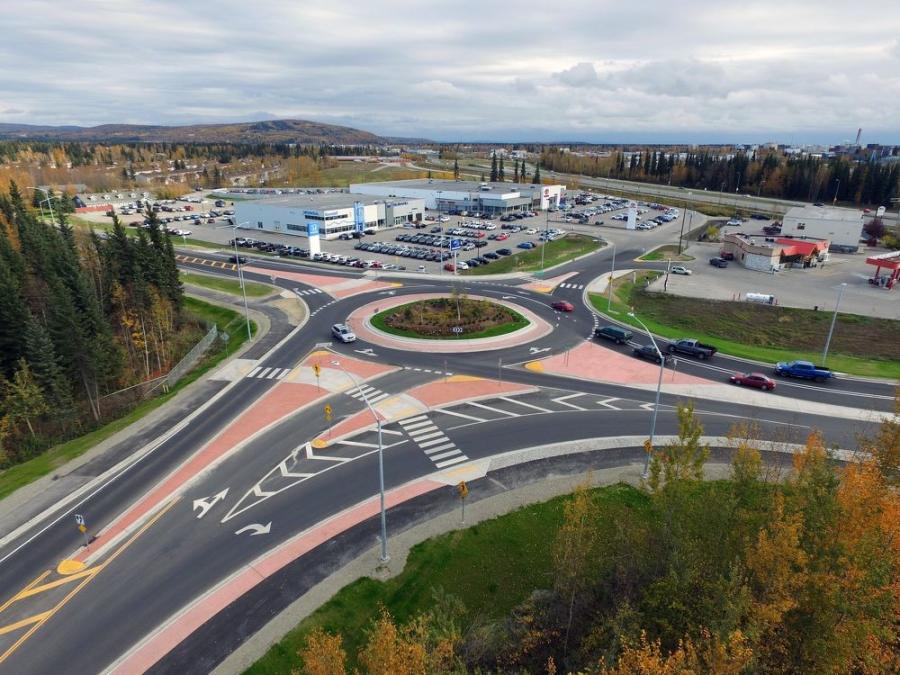 Colaska completed the roundabout project in Fairbanks ahead of winter. The project required 5,700 tons of asphalt and provided better drainage, safer access and improved durability for traffic flow that includes heavy trucks.

Across the country, road builders confront tight deadlines for completing their projects. Often construction teams face the end of the paving season knowing that challenging weather lies ahead.

This scenario was especially true for projects in two contrasting environments, one completed at the "North Pole" and the second in the California desert. Both called for precision planning and execution to complete roads that would keep the driving public safe in harsh climates.

The two projects were both completed in 2019 and earned Quality in Construction awards from the National Asphalt Pavement Association.

Paving contractors in Fairbanks, Alaska (just a 10-minute drive from North Pole, Alaska) encounter conditions faced nowhere else in the lower 48. The temperature contrast comes as no surprise. Local residents experience some summer days that can reach 90 F. and winters with minus 50 F. The roads will be icy in the winter and the prospect of a big-rig driver applying the brakes and sliding through an intersection is frightening to consider.

Engineers at the Alaska DOT and the construction teams also face the problems of managing the permafrost that reaches 100 ft. deep in some areas. The ground keeps the permafrost insulated during the summer months. When the natural layer is replaced with a black surface that absorbs the heat, the permafrost will melt below it. This creates large dips in the roadway. Repairing road damage caused by permafrost is an annual process. 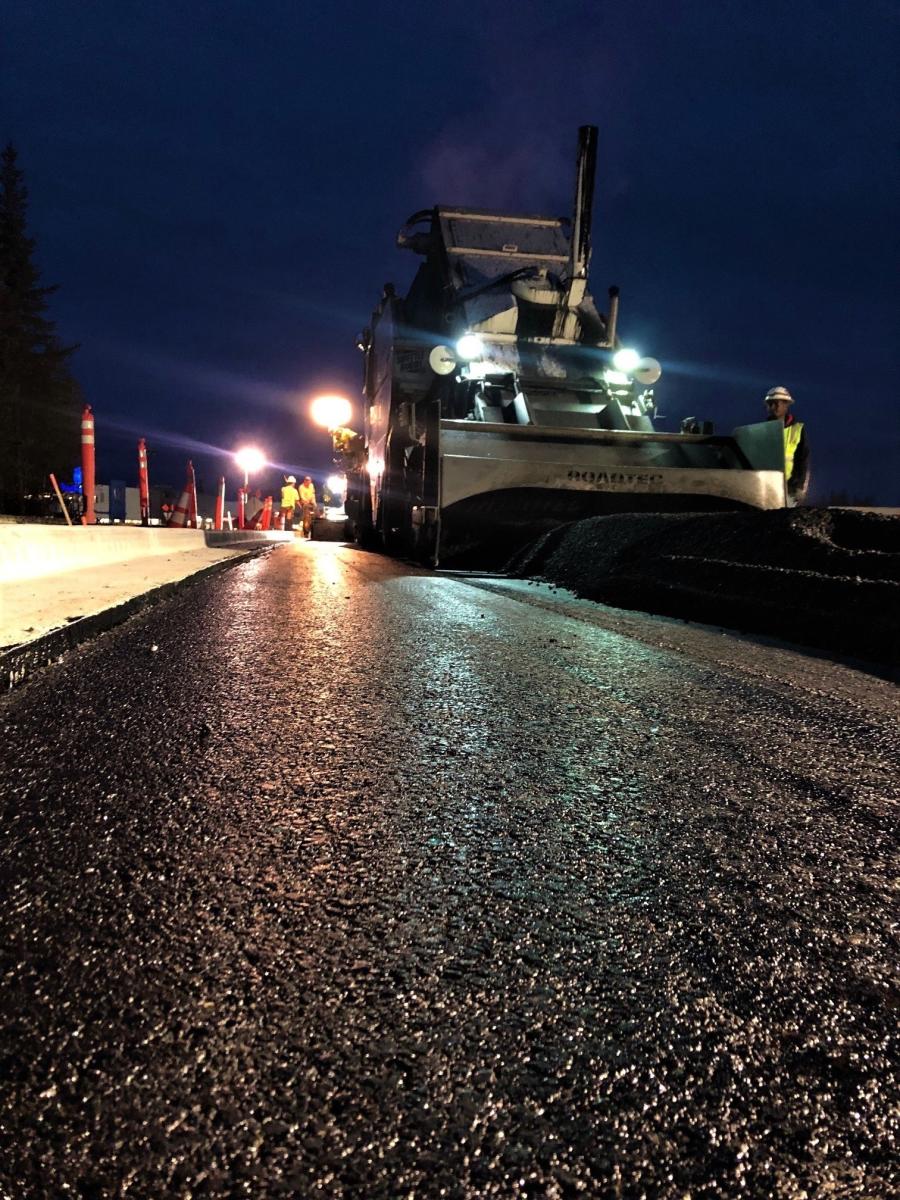 Colaska, the firm that built the Danby-Wemebly roundabout in the Fairbanks area, has used a number of strategies in the past to keep the permafrost hard underneath the road and provide a solid foundation. On one project, Colaska ran thermosyphons underground with refrigerant to keep the underlying permafrost frozen.

As part of a highway safety improvement program, engineers at the Alaska Department of Transportation decided to change the Danby-Wemebly intersection into a roundabout.

"The area had at least four trucking firms, three auto dealerships, two schools, a gas station and other businesses," said Charlie Bohart, project engineer of Alaska DOT. "Regularly, a truck pulling two trailers would fill up with the gas and have to cross traffic to get to the proper lane. This was dangerous with the heavy traffic flow."

Local citizens were opposed when the changes were announced. But opposition quieted after the construction was completed.

"The new design allows a big rig and school bus to be side by side without being hazardous," said Bohart. "The traffic flows smoother. And there's less buildup of ice in the winter, which can happen when vehicles are stopped at traffic lights."

Because of fluctuation in temperature and a high volume of heavy trucks, the state DOT specified a modified asphalt for the project. Modifiers in the asphalt mix cause the road to better shrink and expand with the extreme temperature gradients. Martin Gray was the project engineer for Colaska on the job.

"The highly modified asphalt meant the mix was stickier than our average mix for the workers, making it hard to keep it from sticking to the shovels, rakes and rollers," he said. "However, the additional flexibility in the pavement helps to prevent thermal cracking in the new road, which is often a problem in this area."

The Colaska team began the project in May 2019, finishing up in September before winter.

Gray noted one of the many challenges of the job — "As the temperature started dropping, we put the rollers on the fresh pavement quickly right after the paver. This enabled our workers to reach our required compaction before the asphalt cools too much and begins to harden."

This is a common problem with Alaska's short paving season.

The work team used coarse aggregate in the asphalt mix to build a road that would stand up to the heavy trucks used in the area. The road was constructed using a type 2, class A mix design that is more commonly used on airport runways throughout the state.

"We widened the intersection's footprint and placed a harder asphalt that will hold up to the heavy truck traffic," said Gray. "We used roughly 15 percent recycled asphalt for the project."

Safety was an important concern from the beginning to the end of the project.

"We had to move quickly on the job. Alaskans have a ‘get it done' attitude because they know that winter is coming," said Gray. "Still we strictly followed safety guidelines."

The project earned Colaska bonuses for smoothness and joint density.

Workers on road projects in the Coachella Valley in Indio, Calif., dealt with the opposite weather extreme from Fairbanks.

Although Granite workers are used to hot weather, the contractor took special precautions to protect its people during the Madison Street project. 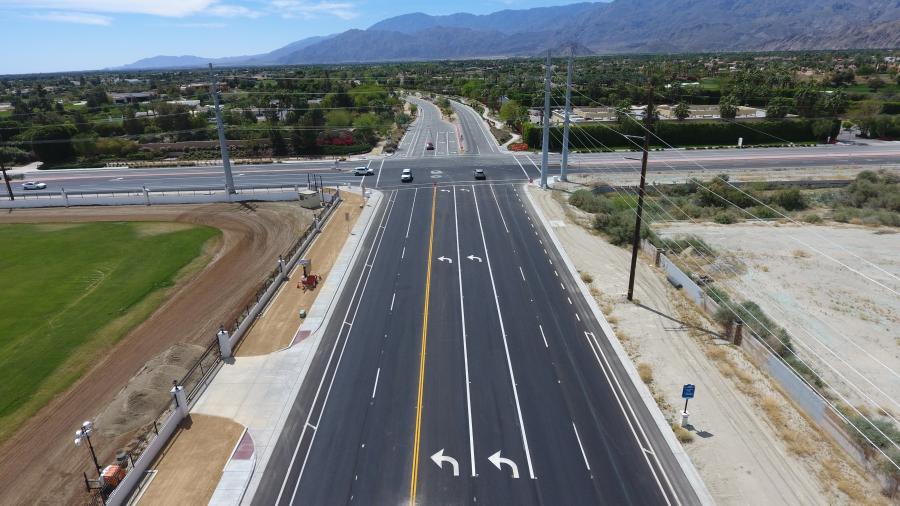 Surprisingly in this hot, desert climate, box culverts were needed because flash flooding is not unusual.

"Our workers crowned the road so water could run off in both directions," Kocaballi said. "Our team inserted perforated pipes underground to collect water, then allow it to seep slowly through the stone bed under the road and percolate toward the water table."

The reconstruction of Madison Street in Indio was important because the area is swarmed each year by thousands of people attending the Coachella Valley Music and Arts Festival held at Empire Polo Club in Indio. The event has been held for the past 20 years. Approximately 100,000 fans crowd the desert venue each day for the six-day annual event over two weekends in April. Road designers believe the new construction will ease traffic congestion for the music fest.

Because of the storm of concertgoers, Granite faced a challenging schedule.

"We had to finish the road by the end of March with no excuses," said Kocaballi. "We were able to produce the asphalt mix at our Indio plant with a 30-minute trip from plant to the job site. That kept our work flowing smoothly." 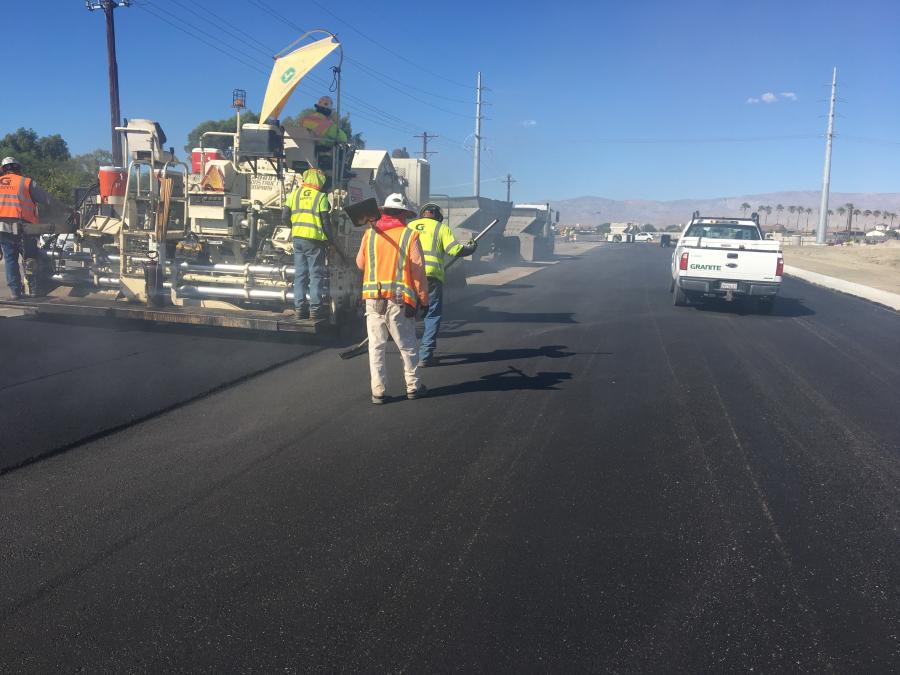 Despite the extreme heat in the desert climate, a standard Caltrans asphalt mix was all that was required. The paving team delivered a 5-in. base course of asphalt with a 1.5-inch surface course. The HMA oil used was performance grade (PG) 70-10 and the mix included 15 percent reclaimed asphalt pavements (RAP). Granite often uses RAP, which allows for the team to conserve raw materials and energy. This practice also cuts emissions from operations, which is part of Granite's sustainability mission.

The road construction project required coordination with the city of Indio, the owner of the festival (Golden Voice), as well as utilities and event coordinators. Additional project partners included Albert A. Webb Associates, construction management.

"I felt honored that our team was given this project," said Kocaballi." We take a lot of pride in our work and believe that what we did had made traveling to this large event much easier and a lot safer." CEG