Pedestrian Bridges, Tunnels Could Be Built in Altamonte Springs, Florida 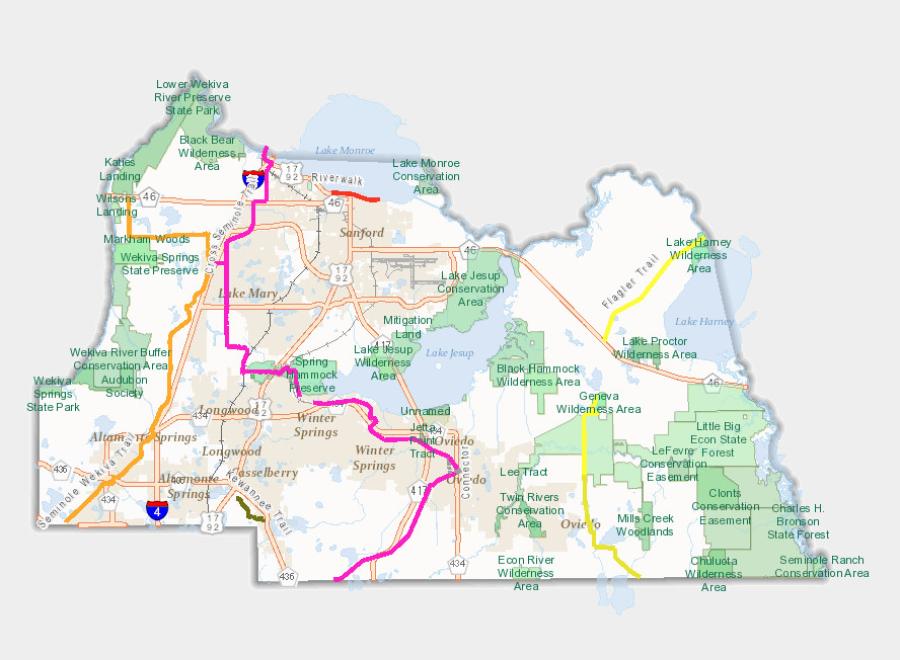 Seminole County, Fla., plans to build either tunnels or pedestrian bridges on Florida State Roads 436 and 434 in Altamonte Springs to give bicyclists and walkers on the Seminole Wekiva Trail a safer and less frightening way of crossing several lanes of traffic on two of the busiest roadways in central Florida.

Seminole County, Fla., plans to build either tunnels or pedestrian bridges on Florida State Roads 436 and 434 in Altamonte Springs to give bicyclists and walkers on the Seminole Wekiva Trail a safer and less frightening way of crossing several lanes of traffic on two of the busiest roadways in central Florida.

On Jan. 12, Seminole County commissioners listened to a consultant's presentation on the feasibility of building either pedestrian overpasses or underpasses about a mile apart from each other; one spanning S.R. 436 at the Laurel Avenue intersection, and another crossing eight lanes of S.R. 434 at the Orange Avenue intersection.

Both crossings would be part of the Seminole Wekiva Trail, a recreational pathway that stretches about 16 mi. between S.R. 46 at Longwood Markham Road, just east of the Lake County line, and the intersection of Bear Lake Road and Maitland Boulevard, just north of the Orange County line.

That area of Altamonte Springs in southwest Seminole is thick with traffic and filled with dozens of big-box retail stores, small shops and a variety of eateries. It also is surrounded by apartment complexes and residential subdivisions.

Approximately 50,000 vehicles use S.R. 436 and S.R. 434 in that area every day, according to the Florida Department of Transportation (FDOT).

The Seminole Wekiva Trail is arguably one of the most scenic and popular pathways of the county's trail network. Bicyclists often use it to travel to Orange County or connect with the Cross Seminole Trail in Lake Mary.

"It is the number one ranked trail in the state of Florida," said Seminole Commissioner Bob Dallari, citing a recent poll. "And one of the things I hear from users is, that it's all about the experience."

But trail users often find it frustrating, time consuming and even frightening that they must come to a complete stop at S.R. 436 and S.R. 434 to cross the busy roadways.

"I tried it one time, and it was the only time I ever tried it, because it was the most horrible experience I ever could've imagined," said Mark Brandenburg, an avid cyclist who is a member of Seminole County's Parks and Preservation Advisory Committee.

That's why it's important that Seminole moves forward with building the walkways, said Emily Hanna, executive director of Bike/Walk Central Florida, a non-profit organization that advocates for bicyclists and pedestrians.

"It's all about the ease and safety of our recreational trails," said Hanna. "And commuting cyclists that use the trail will find it to be faster for them to get from point to point because they won't have to wait two to three minutes for the light."

According to preliminary design plans, a bridge crossing S.R. 436 at the San Sebastian Trailhead near the Home Depot shopping center would cost up to $5.8 million, depending on the design. An underpass is estimated to cost nearly $8 million.

At the S.R. 434 crossing, an overpass bridge is estimated to cost between $6.6 million and $9 million. An estimated cost for an underpass at that location was not available.

The county commissioners directed Scott Seck, executive vice president of Horizon Engineering Group, which compiled the report, to return to them in six months with a more complete report, including the costs of building underpasses. If a final concept is approved, the board would then move forward with construction plans in about a year.

The projects would be paid for with revenues from Seminole County's one cent sales tax, which draws in about $63 million a year that can be used for road improvements, new trails and sidewalks.

Commission Chairman Lee Constantine said he preferred underpasses — or tunnels — instead of bridges, because they are less obtrusive.

"But the only concern I would have in this highly populated area is the potential for safety," he said of pedestrian tunnels. "We do have to have some consideration for safety."

County staff, though, pointed out that the Seminole Wekiva Trail already has two underpasses — one at S.R. 434 and Markham Woods Road, and another at West Lake Mary Boulevard — that county employees lock at sunset and open at sunrise daily.

Commissioner Jay Zembower urged the county and Seck to move forward on the projects.

"This has been on the county's radar for five years, at least," Zembower said. "And we owe it to the citizens. I've always believed that parks, recreational trails and libraries are the things that we should be doing for our communities. Those are amenities."