The majority of the work has had 25 to 30 James D. Morrissey and subcontractor employees on site during peak construction season days. 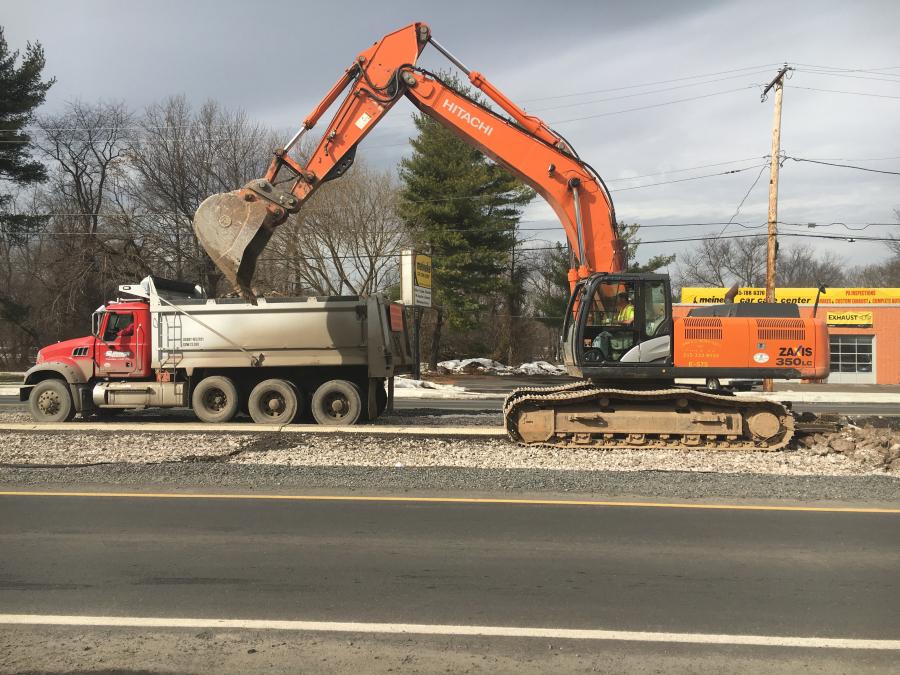 PennDOT photo. The Pennsylvania Department of Transportation is working on a $36.5 million project to enhance travel and safety along a 4.3-mi. (7 km) stretch of U.S. 13 (Bristol Pike).

The Pennsylvania Department of Transportation is working on a $36.5 million project to enhance travel and safety along a 4.3-mi. (7 km) stretch of U.S. 13 (Bristol Pike) between Route 413 and Levittown Parkway in Bristol Township, Bristol Borough and Tullytown Borough.

On the southern end of the project, from Route 413 to Green Lane, the contractor is working to complete the full depth reconstruction of the left lanes, while also installing new drainage in the median.

The work also includes $2 million to replace the bridge over Otter Creek and $300,000 for rehabilitating the structure over Adams Hollow Creek. The work began with the installation of more than 20,000 ft. (6,096 m) of new drainage pipes under U.S. 13 between Green Lane and Levittown Parkway, where the existing road was three lanes in each direction for approximately 2 mi. (3.2 km). South of Green Lane the road narrows to two lanes in each direction.

Prior to the work, the road handled 36,228 vehicles daily and has been designed to accommodate future traffic growth for approximately 48,000 vehicles by 2034. The new roadway should have a lifespan of 50 years, with resurfacing every eight to ten years.

“Prior to construction none of the businesses had curbed driveway access — they were just open to the street and there was no safe place for pedestrians walking along U.S. 13,” he added. “There's no designated bike lane, but we worked in conjunction with the Pennsylvania Department of Conservation and Natural Resources, which oversees the Delaware Canal and maintains a trail which follows the canal and will now cross under U.S. 13 near Green Lane.”

Kerins noted that the drainage system improvements include the installation of several stormwater management basins that are crucial to ensuring that the water is properly retained and treated before being released into the canal and surrounding waterways.

While the U.S. 13 project is not directly linked to the current PennDOT/Turnpike Interchange Project at I-95 and U.S. 1, there is a relationship between the two projects.

“The benefit of that project is that it will take a lot of truck traffic directly from I-95 onto the turnpike,” said Kerins, “and alleviate future heavy truck traffic on this section of U.S. 13.”

Kerins said that the sub-surface drainage work was the biggest challenge for the project, since some of the new 54 in. (137 cm) pipes were installed 20 ft. (6 m) below the road surface. Installing new underground infrastructure through a fully developed urban area, with potential conflicts with underground utility lines — electric duct banks, telephone lines, gas lines and local water and sewer lines is complex and time consuming.

“You have a completely built-out and aged infrastructure and we're introducing new storm drains,” he said, “so there was a considerable amount of utility coordination. The utility companies were cooperative, but we encountered several utilities that were not marked on the maps and we had to develop a number of drainage revisions to avoid conflicts with utilities that could not be relocated.”

James D. Morrissey Inc., based in Philadelphia, assigned Scott Rainey as its project manager and Chris Bunda is the project superintendent.

“There hasn't been anything easy about this job,” said Kerins. “Each construction section is just over two miles long and each section has to be rebuilt in two phases. The reason we are proceeding this way is that there are a significant number of businesses and residences along the corridor and access had to be maintained at all times during the construction. Any time you have a construction zone in front of your business, it can affect business. PennDOT has worked with local businesses to lessen the impacts of this project. Business owners know they can always call us and we'll meet with them to see if something can be done to accommodate their needs. We can't always change the design, but if we can do something to improve their access, we will.”

The majority of the work has had 25 to 30 James D. Morrissey and subcontractor employees on site during peak construction season days. The main subcontractors are: Nyleve Bridge Corporation for bridges; Prieto Corporation for curbs and sidewalks; Armour & Sons Electric Inc. for traffic signals and ITS devices; L & R Construction for reinforcing steel; and All Seasons Landscaping Co. Inc. for wetland plantings and landscaping.

Kerins said that the field staff for PennDOT and the contractor “work well together and react quickly to resolve unforeseen changes in their work environment. The project team responds to challenges with innovative solutions and maintains good communications. The contractor developed a critical path method (CPM) schedule for the project, which they update on a monthly basis, and they're progressing according to their project schedule.”

He also noted that this project has demonstrated the “the importance of doing even more sub-surface utility investigations during design to identify, in advance of construction, the location of utility lines. The field forces are doing more utility investigations and coordination in advance of future operations and that is making a difference now. This is not a standard production job, since we're installing new cross-pipes, inlets, manholes and drainage structures while maintaining traffic in multiple stages. It's just a matter of getting further out in front of potential conflicts so they can be resolved without impacting construction. For the most part we are out of the ground and engaged in the final phase of roadway construction, including grading, paving, curbs and sidewalks. This work goes pretty quickly and people are generally happy when a section of road is done.

“The businesses have struggled with construction for two or three years,” he added. “It's been difficult for them. Hopefully, their businesses will flourish once construction is completed and the corridor is made safer and more accessible for pedestrians and the traveling public.”