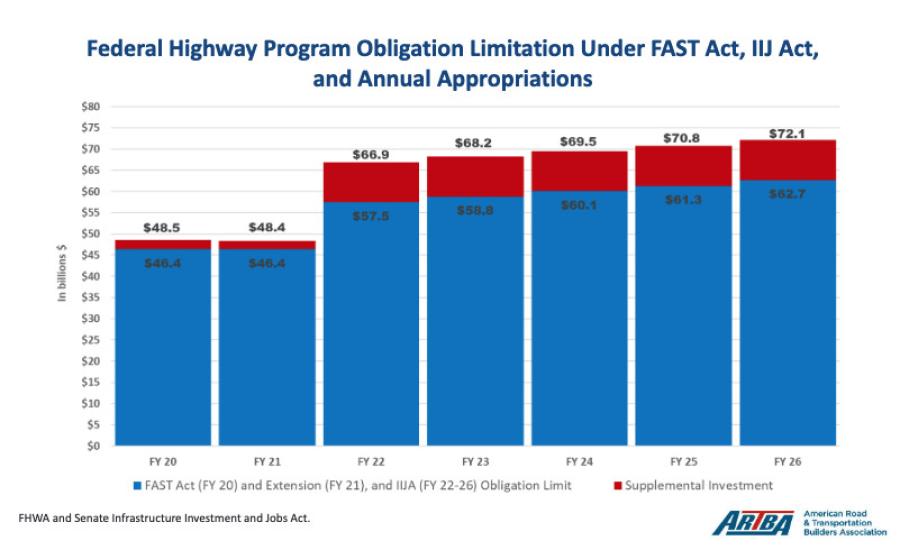 With congressional approval of the $1 trillion Infrastructure Investment & Jobs Act (IIJA) on Nov. 6, President Biden fulfilled a major priority for his domestic agenda.

After months of tense negotiations, the House of Representatives passed the bipartisan infrastructure bill 228-206, following the Senate's 69-30 vote count in August, thus cementing a political victory for Democrats.

The bill includes $450 billion for highway and public transportation investments and a new, five-year reauthorization of federal surface transportation programs.

Biden said Nov. 6 that the vote was a "monumental" step forward and that he would sign the bill.

"We did something that's long overdue, that has long been talked about in Washington, but never actually been done," he said.

The measure includes significant investments in roads, bridges, railways and broadband internet for every state, though the projects and needed influx of money differs from state to state.

PennDOT Counting on Growth in Lettings

For instance, Pennsylvania's roadways equaled almost 252,000 lane miles in 2020, the 11th highest in the United States, meaning the Department of Transportation (PennDOT) spends a lot of time — and money — on building projects and maintenance.

A news release on Nov. 8 from Associated Pennsylvania Contractors (APC), a statewide trade assembly of road and bridge professionals, cited data from the American Road & Transportation Builders Association (ARTBA) that noted several specific increases are expected to come the Keystone State's way over the next few years because of the bill's passage, including:

"During our recent discussions with PennDOT, district engineers and central office personnel have indicated that they have projects ready to go in almost every district and we should see lettings increase without much lag time," Latham explained in the release. "PennDOT and other states will have some brief waiting period for [the Federal Highway Administration] to allocate the funds and produce any necessary guidance."

Pennsylvania Gov. Tom Wolf called the national infrastructure measure historic and said it would allow for significant investments that will push the commonwealth forward.

"It will allow Pennsylvania to invest billions of dollars to improve our roads, bridges, ports and airports, address the climate crisis, and ensure more Pennsylvanians have access to high-speed internet," the Democratic governor said in a statement. "Further, it will create and sustain quality, good-paying union jobs and improve quality of life for hard-working Pennsylvanians.

"I applaud President Joe Biden's commitment to prioritizing infrastructure — a commitment I share for our commonwealth — and the bipartisan Congressional actions to pass this legislation, which will strengthen our infrastructure, our economy, our environment, and our country."

The Pittsburgh Post-Gazette reported that Congressman Mike Fitzpatrick was the lone Republican from Pennsylvania voting yes on the measure, joining every one of the state's Democratic House members voting in favor of the bill.

The bill also was lauded by the Greater Pittsburgh Chamber of Commerce, with the group saying the investment could drive innovation and help fund the transportation of the future.

"We believe no place in the U.S. is as well-positioned as the Pittsburgh region to serve as a model for the country and put federal investment to work with our skilled workforce advancing U.S. economic competitiveness, climate resilience and equity," noted Matt Smith, the chamber's president. "We have the assets, ready-to-go projects and the partnerships to drive transformational change and demonstrate to federal policymakers that our region is best to invest."

Pennsylvania Democratic Party Chairperson Nancy Patton Mills said the funds could improve the lives of millions of business owners, families and workers across the commonwealth.

"President Biden and the Democrats in Pennsylvania worked to deliver one of the most transformational infrastructure plans in our lifetime," she said in a statement. "This historic investment will create thousands of good-paying union jobs, revitalize our roads and bridges and ensure clean drinking water for every Pennsylvanian, all without raising taxes for working families."

The bill's stated goal is to create large swaths of jobs nationwide, as well as improve broadband, water, and long-neglected public works. There is $550 billion set aside to fix roads, bridges and highways over the next 10 years.

APC's 400 members including prime and subcontractors, consulting engineers, material suppliers, manufacturers and others with an interest in Pennsylvania's road and bridge construction industry. The association has been serving the industry for more than 80 years and represents the majority of actively bidding contractors in the Commonwealth's $1.6-billion highway industry. APC works diligently to facilitate the work of its members in its efforts to improve the state's road and bridge network.