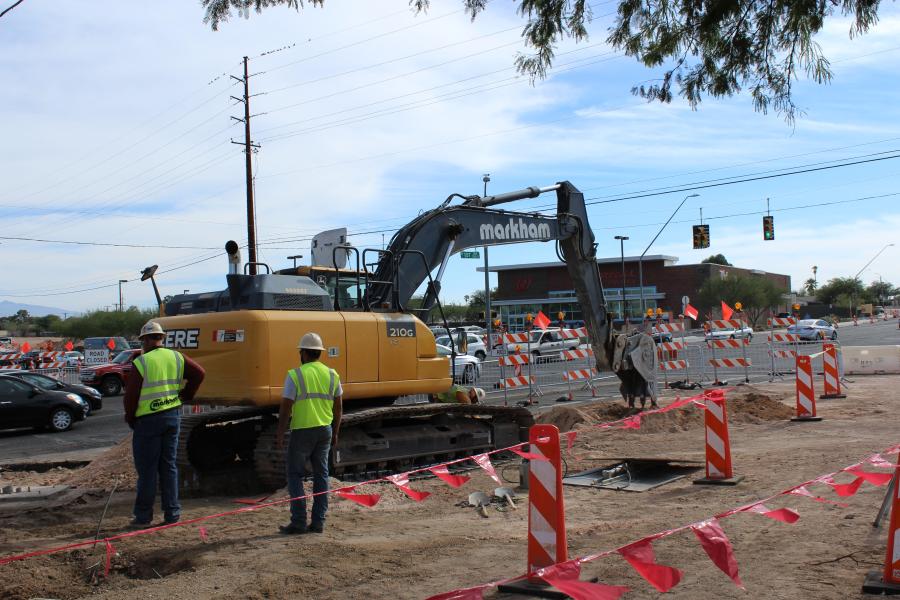 Second-phase construction is under way on a six-phase Grant Road Improvement Project that will add a new lane in each direction and improve transit, bicycle and pedestrian facilities. (Tucson Department of Transportation photo)

Calling Grant Road just another road in Tucson, Ariz., would be a gross understatement. Crews are widening the much-used thoroughfare — referred to as an urban arterial road — from four to six lanes. An arterial road or arterial thoroughfare is a high-capacity urban road.

Its primary function is to deliver traffic from collector roads to freeways or expressways and between urban centers at the highest level of service possible. Grant Road runs east of I-10 and just a few blocks north of the University of Arizona. It is considered a popular road with traffic on the rise as Tucson grows and tourist activity increases. Stores, restaurants and auto shops are situated near Grant Road. Besides widening and modernizing the road, crews will make it pedestrian and bicycle friendly.

Second-phase construction is under way on a six-phase Grant Road Improvement Project that will add a new lane in each direction and improve transit, bicycle and pedestrian facilities. Crews will build and improve bike lanes, widen sidewalks, put in more signalized crosswalks.

The $19 million second-phase project will provide improvements on Grant Road from Castro Avenue to Santa Rita Avenue. The stretch of roadway spans 1.2 mi. It is a busy stretch that includes Mansfield Park, a popular destination with sports facilities and a recreation center with bingo, guest speakers and crafts.

In the current phase, workers will install a new median as well as access lanes to businesses and homes. Pullouts and shelters also are being installed along Grant Road to improve transit, and a pedestrian signal will be installed at 6th Avenue. Besides roadway improvements, workers will install new landscaping along the route that includes water harvesting systems.

The Phase 2 project also includes indirect left turns at Stone Avenue and 1st Avenue. An indirect left turn is made possible by installing an indirect turn lane and widening the far side of the turn so a U-turn can be done without stopping (when clear). It reduces interference between U-turn and through traffic, particularly for large vehicles.

When complete, Grant road will improve the region's east-west mobility with improvements starting from near North Oracle Road just east of I-10 and extending east to near North Swan Road. The six phases cover 5-mi. of Grant Road. Planners designed the improvements to create a state-of-the-art, multi-modal transportation corridor. Safety also was an important consideration.

“The improvements resulting from the Grant Road Improvement Plan will enhance safety and balance mobility and accessibility for all users including motorists, pedestrians, bicyclists, transit riders and those with disabilities,” said Michael Graham, public information officer of the city of Tucson. “The widening of Grant Road to six lanes also improves its function as an urban arterial street within Tucson's network of streets.”

Graham added that average daily traffic on Grant Road from Castro Avenue to Santa Rita Avenue is 29,039 vehicles a day. Grant Road was originally established in 1920 as little more than a country road.

Now besides being widened, the road is being catered to multiple users.

Voters approved the Grant Road Improvement Project and its half-cent sales tax funding in May 2006 as part of a $2.1-billion Regional Transportation Authority (RTA) plan.

Once the project started, work went smoothly except for some problems with utility locations.

“We had utility issues early on,” said David Burbank, project engineering manager. “We worked with the contractor to avoid those areas, which in turn, gave the various utilities time to move their facilities.”

In a few instances, the city of Tucson used eminent domain proceedings to remove obstacles or structures, so the roadway could be widened.

Markham Constructing of Phoenix is prime contractor for the Phase 2 project. The company was selected through a request-for-proposal process with the award going to the low bidder.

The project has 13 subcontractors with about 30 workers on the job each day.

All the improved and widened roadway will be constructed of asphalt.

Crews will apply about 31,000 tons of asphalt over the course of the project.

Road level had to be lowered slightly in places, requiring some dirt to be hauled out.

“On this project, we have a small amount to be exported, 36,700 cubic yards,” Burbank said.

Project crews will use a hot-in-place (HIR) recycling train to repave Grant Road. A concrete replacement crew will mill the existing road top that includes 1-½ in. of asphalt. Milling is performed by milling machines or cold planers.

The machines use a large rotating drum to remove and grind the road surface. Crews then heat the roadway and mill another inch of asphalt.

Workers then mix milled concrete with “rejuvenating” aggregate materials to produce new asphalt. They then lay down 1-½ in. of the new asphalt.

Crews conclude the process by resetting utilities and painting permanent stripes to divide the roadway.

The improvements include minor widening near intersections and where new sidewalks are being put in. Some side street closures have been necessary to install new underground utilities.

“The project recognizes the diversity of residents and independent businesses along Grant Road and will help them to revitalize the places in which they live and work,” Graham said.