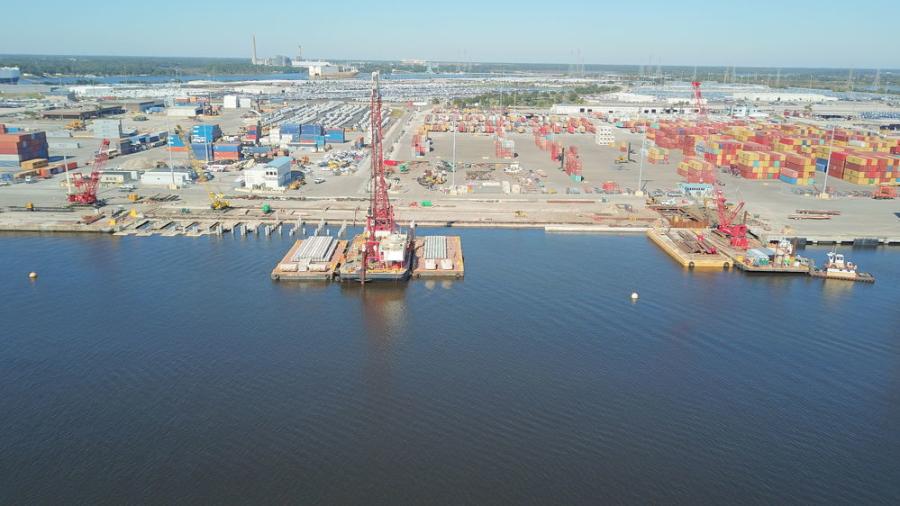 Once complete, the facility will be equipped to handle approximately 425,000 additional 20-ft. equivalent units annually.

Leadership from the Jacksonville Port Authority (JAXPORT) and private partner SSA Marine were joined by U.S. Department of Transportation Maritime Administrator Rear Adm. Mark Buzby this past November for a groundbreaking ceremony heralding a $238.7 million international container terminal at JAXPORT's Blount Island Marine Terminal. The project will expand and upgrade the facility with completion set for 2023, increasing efficiency and the accommodation of more containers on the expanded footprint, according to JAXPORT officials.

"Jacksonville's port is a critical economic engine for our city, state, region and nation," Mayor Lenny Curry said at the time. "The cargo that moves through these docks every year generates jobs and economic opportunities that empower families throughout our community. The enhancements we're breaking ground on today will help companies meet the growing demand and further enhance Jacksonville's growing reputation as a logistics hub for the southeastern United States."

Phase 1 of the project was completed in 2016. Phase 2, which is being constructed in two portions, is the $51 million rehabilitation of 1,382 LF of berth space. 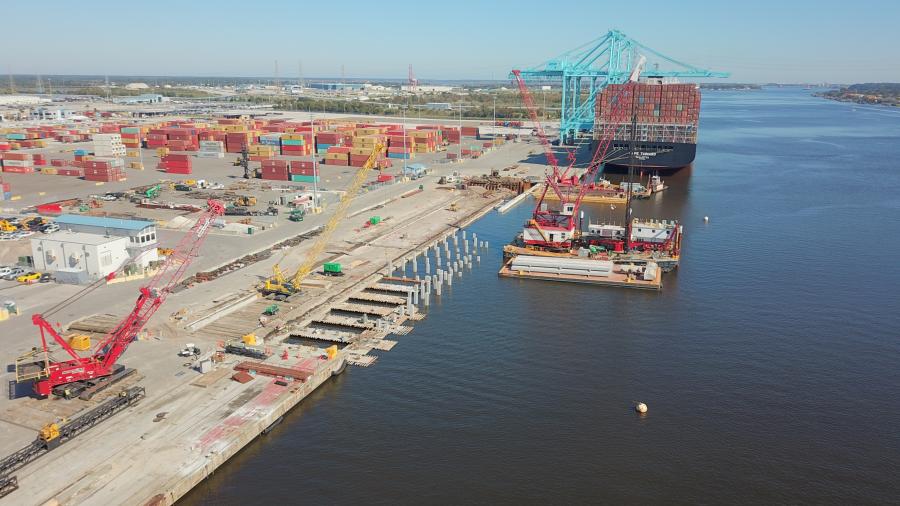 Crews are using precast 75- to 93-ft.-long concrete piles and precast panels as a soffit for the deck. The project will provide electrical infrastructure for future electric container cranes, including crane rails for 100-gauge cranes and cargo rail for on-dock capabilities. The project also calls for improving drainage and lighting.

"There are landside and waterside components to this project, which are occurring simultaneously," Kretzschmar said. "Waterside is being constructed using derricks and crane barges. Landside is being completed using straight cranes.

"In the landside pile driving, contractors are using a Berminghammer to eliminate the need for using a template. On the waterside, they are utilizing a retrofitted dredging derrick barge with a permanently affixed crane."

To overcome pile driving challenges due to varied ground composition, contractors installed longer piles at specific locations. Safety is very important to JAXPORT, and Kretzschmar was proud to report that there have been no accidents or equipment incidents.

Once complete, the facility will be equipped to handle approximately 425,000 additional 20-ft. equivalent units (the industry standard for measuring containers, known as TEUs) annually. Other improvements include storm drainage, enhanced lighting, signage and utilities.

Earlier in November 2019, the federal government awarded JAXPORT a $20 million grant for the reconstruction and expansion, which is taking place on 100 acres of existing terminal pavement.

SSA Marine is contributing up to $129.7 million — about 65 percent of the total cost — for the use of the terminal and facility upgrades, including the addition of three 100-gauge container cranes. In addition, $109 million in berth rehabilitation and upgrades are currently underway that will allow the terminal to simultaneously accommodate two post-Panamax vessels.

"The award of this highly competitive grant speaks volumes about the significance of this project to the economy of our region and country," said JAXPORT CEO Eric Green. "We are grateful to Secretary Elaine Chao and our state and federal elected officials who continue to advocate for our growth — further positioning Northeast Florida to take full advantage of the economic opportunities our thriving seaport creates." 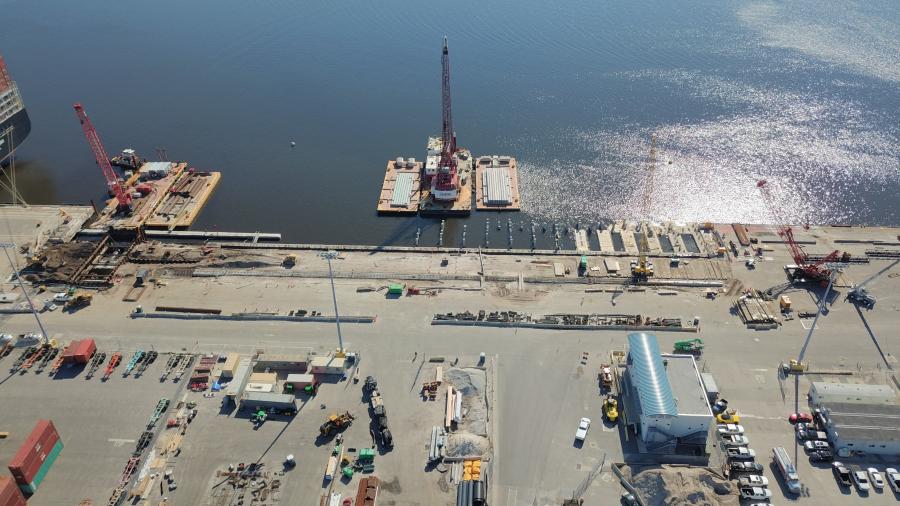 Operations will continue throughout the redevelopment. The 2023 completion date of the infrastructure and equipment updates coincides with the completion of the federal project to deepen the Jacksonville shipping channel to 47 ft., which will allow the facility to accommodate more cargo aboard the larger ships calling on JAXPORT from Asia. Berth updates are expected to be completed in 2021 and will allow the terminal to simultaneously work two post-Panamax vessels. The Harbor Deepening Project, currently ahead of schedule, includes construction of a vessel turning basin that will allow larger vessels calling on the terminal to turn at Blount Island.

The SSA Jacksonville Container Terminal offers 80 acres of terminal operating space, with the option to grow up to 120 acres as space becomes available. The facility features three post-Panamax electric container cranes and terminal plans include the addition of three more state-of-the-art container cranes. The facility is expected to create or protect 3,500 jobs, in addition to attracting new businesses and jobs resulting from the terminal's increased efficiency and capacity.

"There is no doubt about it, Jacksonville's port is on the rise," said Ari Steinberg, SSA Marine vice president of project engineering and implementation. "This public-private partnership enables SSA to provide a world-class facility for our customers while investing in Northeast Florida — a community in which we have proudly service for more than four decades."

A recent economic impact study found that cargo activity at Jacksonville's seaport generates more than 26,000 jobs in Northeast Florida and supports nearly $31.1 billion in annual economic output for the state and region.