The project involves the installation of the longest continuous curved conveyor ever to be installed in the state of Maryland. 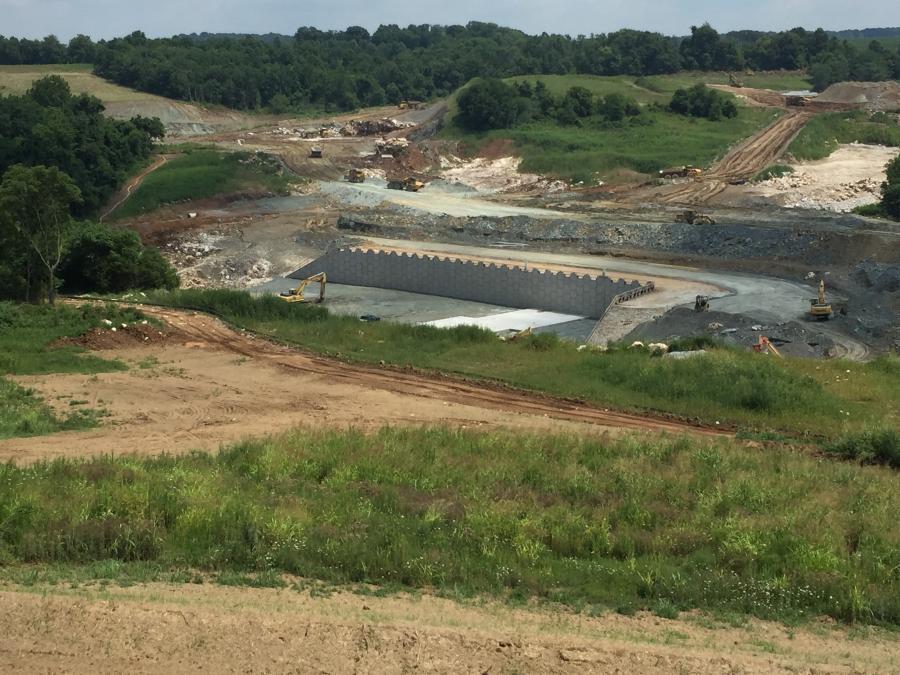 The crusher pit retaining wall is half complete. Articulated trucks move rock from initial pit to fill site. The dozer and motorgrader maintain the haul road.

The second phase of a quarry replacement project in Carroll County, Md., which involves the installation of the longest continuous curved conveyor ever to be installed in the state, is nearing completion.

The private project for an undisclosed dollar amount is for Lehigh Cement Company LLC. The company is currently replacing its Union Bridge Quarry with a greenfield quarry expansion in the neighboring town of New Windsor.

The Phase 2 contract was awarded to Fay, an i+iconUSA Company, with Scott Wilson serving as senior project manager.

Work on this phase began in October of 2015, and was originally scheduled for completion on Jan. 31, 2017. However, crews currently forecast completion in late 2016.

Phase 2 includes site development services for the development of an initial pit, crusher pad, building pad, and transfer tower pad. Extra work added once the project started included the installation of a haul road and erection of a Mechanically Stabilized Earth (MSE) retaining wall and foundations associated with the new crusher system.

The building pad is the site for a 13,000 sq. ft. (1,208 sq m) shop/office for quarry administration and equipment maintenance. The shop/office is being constructed under Fay's other Lehigh contract, along with a 4.7-mi. (7.6 km) overland conveyor.

Concrete work on the project includes construction of eight concrete footings for a crusher installed by others, as well as a truck unloading pad at the top of the retaining wall to allow 100-ton (91 t) mining trucks to dump directly into the crusher.

The MSE retaining wall constructed inside the crusher pit created grade separation and access for mining trucks to dump into the crusher. The wall is 50 ft. (15.24 m) high and 400 ft. (122 m) long, with tapered ends. Reinforcement of the wall was much heavier than a standard highway wall due to the height and extreme 294,000 lbs. (133,356 kg) surcharge imparted by loaded 100-ton mining trucks. Up to 11 40-ft. (12-m) long galvanized steel straps per 24 sq. ft. (2.2 sq m) panel were used to reinforce the retained fill. Reinforced fill passing a 3 in. (7.6 cm) sieve was crushed on site from limestone in the quarry.

Fay is concurrently working on Phase 1 of this project, which includes excavation, installation of 9,600 ft. (2,926 m) of box culverts, 11,000 ft. (3,353 m) of slab-on grade, and several foundations for the ultimate installation of a 4.7-mi. conveyor system to enable the client to transport crushed limestone from the quarry to its Union Bridge cement plant. This will be the largest curved conveyor in the state of Maryland.

“The karst geology of this limestone deposit presented significant challenges to the excavation and blasting crews,” Wilson said. “The depth of bedrock was extremely variable due to dissolved limestone and faults. Limestone pinnacles up to 20 feet high were overlain and surrounded by soft, wet clays. A high water table compounded the difficulties, since the crusher pit was excavated 30 feet below an active stream. The fill material in the early portion of the project was excavated from above and in between the limestone pinnacles and consisted of clays and poor quality soil, which made it challenging to build haul roads.”

According to Wilson, the limestone mined in the New Windsor Quarry is more than 900 million years old and will supply the Lehigh Cement plant with more than 70 years' worth of raw materials. The Lehigh Union Bridge plant is the second largest cement producing facility in North America and supplies cement from New York to Indiana. At completion, the New Windsor quarry pit will be more than 400 acres and 700 ft. (213 m) deep.

“The initial stripping and working through the karst layer has been a major challenge that Fay has safely accomplished while maintaining their development schedule. Fay has placed safety as their top priority, meeting Lehigh's high expectation and requirements as well as appropriately addressing community concerns. Fay has been a professional and competent company that will be asked to bid on future projects,” commented Kevin Cove, director of project engineering, Lehigh Cement.

The safety regulations on the project are per the Mine Safety and Health Administration (MSHA), not OSHA. Notable differences in MSHA regulations are: vehicle parking brakes, equipment inspection reports, wheel chocks, and task-specific training. The project included 90 acres of clearing and grubbing and the excavation of 1.6 million cu. yds. of overburden, bedrock, karst, limestone and phyllite material.