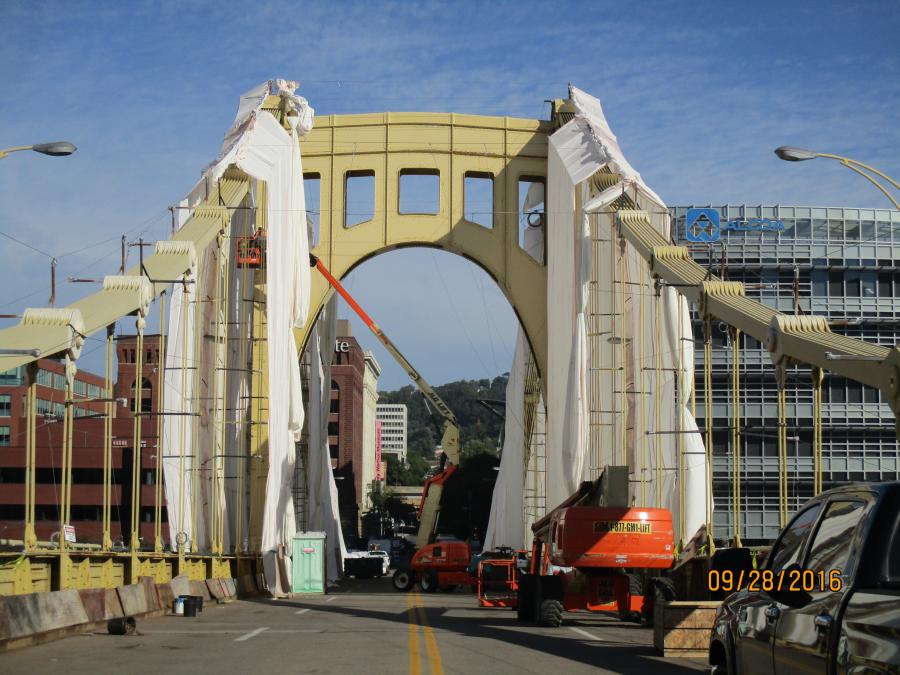 The three “Sister Bridges” that are part of the Pittsburgh, Pa., city skyline are undergoing a major rehabilitation project, and the Andy Warhol (7th Street) Bridge is the first to undergo the process.

The three “Sister Bridges” that are part of the Pittsburgh, Pa., city skyline are undergoing a major rehabilitation project, and the Andy Warhol (7th Street) Bridge is the first to undergo the process. The other bridges are the Roberto Clemente (Sixth Street Bridge) and the Rachel Carson (Ninth Street Bridge). All three bridges are currently owned and maintained by Allegheny County.

The Andy Warhol Bridge is actually the second bridge to be placed at the site, replacing the 1884 Gustav Lindenthal Suspension Bridge, as mandated by the 1889 River and Harbor Act. It was the first self-anchored suspension bridge in United States, and construction began with wood pile driving in 1925 by American Bridge Company. Rivets and built-up plates also were used in the construction.

The project began on Aug. 8, 2016, and is currently on schedule to be complete by Nov. 17, 2017. The contract was awarded to Brayman Construction, Saxonburg, Pa., with Kevin Meade serving as the project manager.

The contract includes the following:

• Total repainting of the superstructure in Aztec gold;

“The first challenge was to erect a work platform beneath the bridge to allow access to perform painting and steel repairs,” said Aimie M. Downs, director of communications of Allegheny County.

Downs noted that the bridge has numerous areas that have tight access clearances. The first area is inside the stiffening girders, which have significant deterioration due to water and road salt entering via the curb plate along the roadway. This curb plate was removed to allow easier access, and a new sloped curb plate with waterproof access hatches is being installed to minimize the amount of standing water that may enter the stiffening girder.

Another reported tight area is inside the two towers. Each tower consists of two built-up H sections 4-ft. deep. The exposed ends of the tower have non-structural cover plates that have limited access openings. The painting contractor used specialized blasting nozzles and spray heads to successfully perform this work without entering this confined space.

“Keeping the bridge to current code requires some innovative solutions, especially when the bridge has undergone several past rehabs,” Downs said. “Maintaining the historical nature of the structure also requires items such as tension control bolts to mimic rivets and placement of caulking to reduce water infiltration through multiple plies of steel plates.”

Downs noted that since this project is the first of three sister bridges that will be rehabilitated, consideration must be given to how any repair decision will affect the remaining two bridges.

The Warhol Bridge and its two sister bridges are self-anchored suspension bridges. Downs noted this places the two longitudinal stiffening girders in compression and requires unique bearings at the ends of both girders.

“These unique bearings consist of an articulated arm that is pin connected to the stiffening girder and to an eye-bar anchorage system,” she said. “This configuration allows for thermal expansion/contraction of the bridge while resisting any vertical downward or uplift loads which are induced by traffic live loads on the bridge deck.”

The project is replacing all four bearings with new bearing assemblies that will have rock anchors to increase the tie-down capacity. This work also requires temporary support at the bearings, and the contractor developed an innovative method to utilize the new permanent anchors to provide temporary tie-down capacity before being transferred into permanent condition.

A unique aspect of the bridge noted by Downs is that the south tower is on roller pins that allow the tower to move as the entire bridge expands or contracts to temperature changes. These roller pins are contained in a grease box at the base of the tower. The grease will be removed and the roller pins steam cleaned. After the pins have been inspected, a new grease box will be installed and new grease added to ensure that the bridge can continue to properly adjust to temperature changes.

The Rachel Carson Bridge will be next in the process, taking about two years to complete, and the Roberto Clemente Bridge will be last, expected to be finished in 2021.