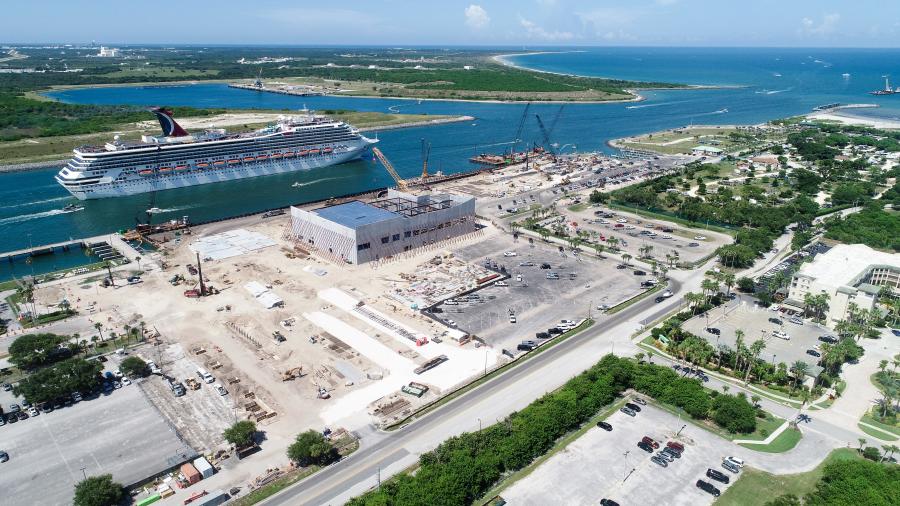 The Carnival Liberty sails past construction of the cruise line’s newest home at Port Canaveral in Florida.

Just to the south of where Americans once launched men to the moon and will soon begin their voyages to Mars is the site of a different kind of facility — one that also helps launch people, but to more Earth-bound destinations.

Port Canaveral is a cargo and naval port 10 mi. south of the Kennedy Space Center (KSC) on central Florida's east coast. But it is also one of the busiest passenger cruise ports in the world, with more than 4.5 million travelers passing through the harbor via many of the major cruise companies.

One of them, Carnival Cruise Lines, has partnered with the port to build a sparkling new terminal and dock, a replacement for its older facility. The modern Cruise Terminal 3 (aka CT3) will accommodate Carnival's newest and largest ship, the Mardi Gras, a massive ship weighing in at 180,000 tons with enough room to comfortably hold up to 6,630 passengers.

Project to be Finished in Late Spring

The new CT3 venture is in its final months of construction, with the completion date expected toward the end of May. The entire CT3 campus will consist of a main terminal building, an 1,800-space, six-level parking garage and a new passenger boarding bridge — all encompassed within 15.7 acres and located just west of Jetty Park, the port's public beach. In the waters adjacent to the complex, marine construction crews are also rebuilding and improving the berth to hold Carnival Cruise's various size ships. 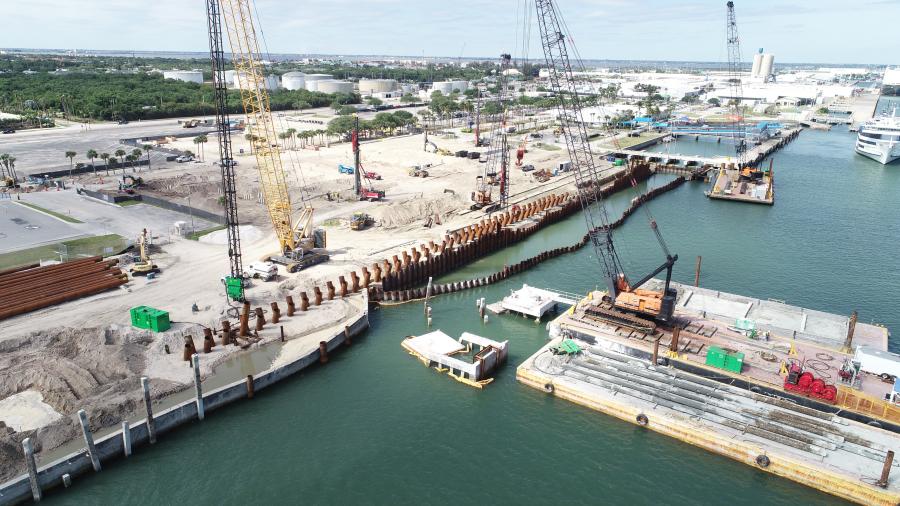 Site work for the new terminal began in January 2019, with work progressing toward completion later this spring. Marine construction on the ship berth began a few months earlier in September 2018 and was substantially complete in early March of this year. The contract for the parking deck was awarded in January 2019 and is due to be finished in early April.

A grand opening is set to follow in July, and if all goes to plan, the Mardi Gras will make its initial sail from Port Canaveral in November.

The expected cost of the CT3 project is $163 million, the largest capital program ever undertaken at the seaside port.

"The CT3 project is a historic milestone for our port and underscores the 30-year partnership we have with Carnival," Capt. John Murray, Port Canaveral's CEO, told CEG. "The trust and confidence we've earned with our great cruise partner has been the foundation of success and we are excited for what the future holds. We're building a great new terminal for an innovative new ship, and we're looking forward to welcoming home Mardi Gras."

History Lives at the Harbor

Port Canaveral itself was first built just after World War II, with the first cruise ships docking there in 1964. The port also became a support location for NASA projects as a transit point for barges moving rockets and other large pieces through the lock from the Atlantic Ocean into the Banana River and on to the KSC. Those cargoes included the Saturn V rockets for the Apollo missions and the fuel tanks for the space shuttles. In 2020, it remains a key harbor for both public and private rocket programs.

On any given day, though, several large cruise ships can be seen either docked or passing through Port Canaveral's beautiful channel along the Space Coast.

According to Bill Crowe, the port's vice president of engineering, construction and facilities, the renovation of Cruise Terminal 3 had been on the port's planning board for years, but not until 2016 did the facility begin discussions with Carnival Cruise Lines for a new home there. At that point, the port learned that Carnival also wanted to deploy one of its newest, largest and most technically advanced cruise ships to the port, the Mardi Gras. 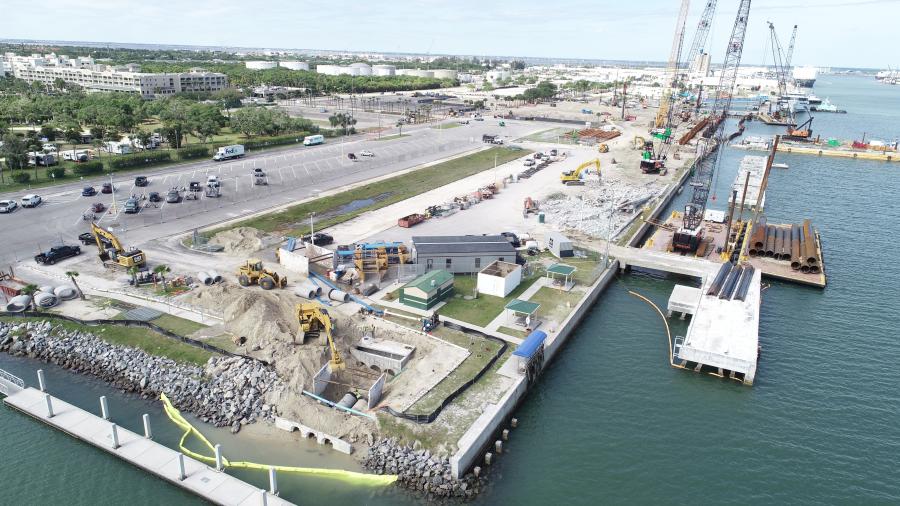 The main structure of the complex is the two-story terminal building itself, which is sized at approximately 188,000 sq. ft. The first floor of the structure will be used for passengers exiting from a cruise ship and will also have an area capable of holding 10,000 pieces of baggage. Just above on the second floor is where passengers will embark onto their ship by passing through as many as 12 scanning machines for security. There will also be pre-check kiosks, 10 check-in counters and seating for up to 1,700 people waiting to be boarded.

Designed by Bermello Ajamil & Partners in Miami, the $74.5 million terminal is built to resemble the gantries holding rockets in place before liftoff, a reflection of the area's long association with space travel. Nicknamed "The Launch Pad," the glass in the building will allow passengers awaiting their cruises to easily view any rocket launches from KSC.

Adjacent to the terminal will be a smaller building for baggage scanning and crew check-in, and a separate provisioning warehouse.

The general contractor for the land-based portion of the CT3 project is Ivey's Construction Inc., an experienced four-decade-old firm located in Merritt Island, just a few miles away. Company vice president Rocky Johnson noted that more than three dozen Florida subcontractors are employed at the job site.

Just west of the cruise terminal is the parking garage, built at a cost of $29.5 million. Ivey's used the services of FINFROCK, another Florida contractor, to design and erect the deck.

The ground floor of the facility will be used for passenger drop off for both buses and cars with other five stories dedicated to vehicle parking. In addition, the third floor will have an elevated walkway joining the garage to the terminal.

Johnson described the new terminal and deck as structurally and technologically sound "in every way." 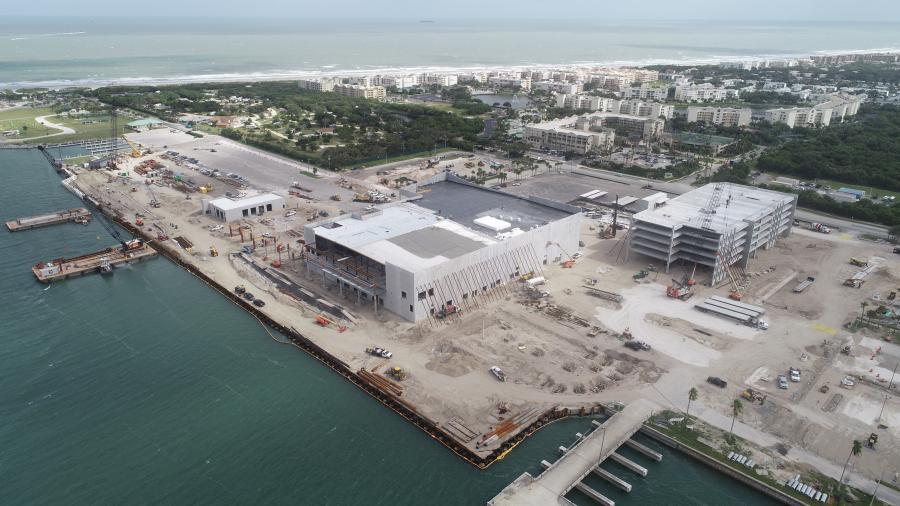 "For one, these structures are hurricane rated and will be one of the safest places to be in Brevard County during a big storm, which is notable because they are so close to the Atlantic Ocean," he continued. "Plus, our underground stormwater retention system is one that is cutting edge and cost a premium, but is unparalleled in environmental protection and site utilization. The IT infrastructure at CT3 is nothing short of superlative. The efficiency of this new terminal, due to the IT system, couldn't even be imagined just a few years ago. Now it's a reality, and there is nothing out there that can compete with it."

The contract for erecting the pair of passenger boarding bridges onto Carnival's waiting cruise ships was awarded to Adelte Ports & Maritime of Barcelona, Spain. It is one of the few contractors in the world that specializes in building these structures for marine use. This contract is valued at $5.25 million.

Cruise Terminal 3's 1,309-ft.-long ship berth was designed by the engineering firm of CH2M Companies. The heavy-duty job was contracted to Titusville's RUSH Marine for a total cost of $38.6 million. The company self-performed approximately 85 percent of the overall scope of work on the project, most of which was in the waters of the harbor. 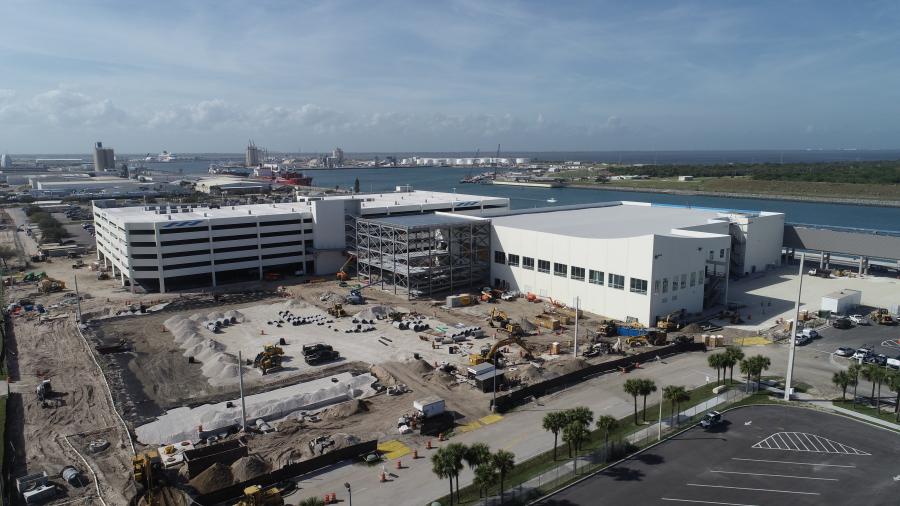 He also noted his company installing a deep wall structure, an A-frame tie back system, and two 96-in. diameter by 104-ft.-long waterside mono pile dolphins (fixed structures to help protect a berth when a boat docks) complete with short and sturdy vertical posts known as bollards. The refurbished wharf will also have one four-pile waterside dolphin structure with bollards, seven landside dolphin structures and bollards, a trench drain system and an underwater scour mat system.

During the process, RUSH Marine put in 16,500 cu. yds. of concrete and grout, 591 tons of reinforcing steel and 7,434 tons of structural steel, steel piles and tie rods. The contractor also removed and disposed of 60,000 cu. yds. of dredge materials.

All Types of Equipment Utilized

Back on land, Rocky Johnson of Ivey's Construction said hundreds of pieces of earthmoving and hauling equipment, in addition to cranes, have shaped the CT3 complex into being. That list includes dozers, graders, front-end loaders, off-road and on-road hauling trucks, backhoes and tractors with drag blades — most of which are owned by the local subcontractors doing the work.

"Ivey's has utilized nearly 50 different cranes on the project, including large friction-type track cranes, large and small over-the-road hydraulic cranes, rough-terrain hydraulic cranes and smaller truck cranes," Johnson reported. "Like the other equipment, many are owned by the subcontractors, but some are rented from places such as Beyel Brothers Crane & Rigging in Cocoa."

RUSH Marine also leased much of the equipment it used on the project, including barges and cranes, from Jacksonville's MOBRO Marine. The capacity of those cranes ranged from 60 tons to 350 tons, Landry said.

Almost 3,000 construction personnel have worked on the CT3 program, with 2,500 representing Ivey's and its subcontractors — the vast majority of whom are local. At the peak of construction, Johnson said,

Ivey's had about 300 craftspeople at the job site on any given day. Also, at that time, a little over 100 people made up the crews working for RUSH Marine. CEG