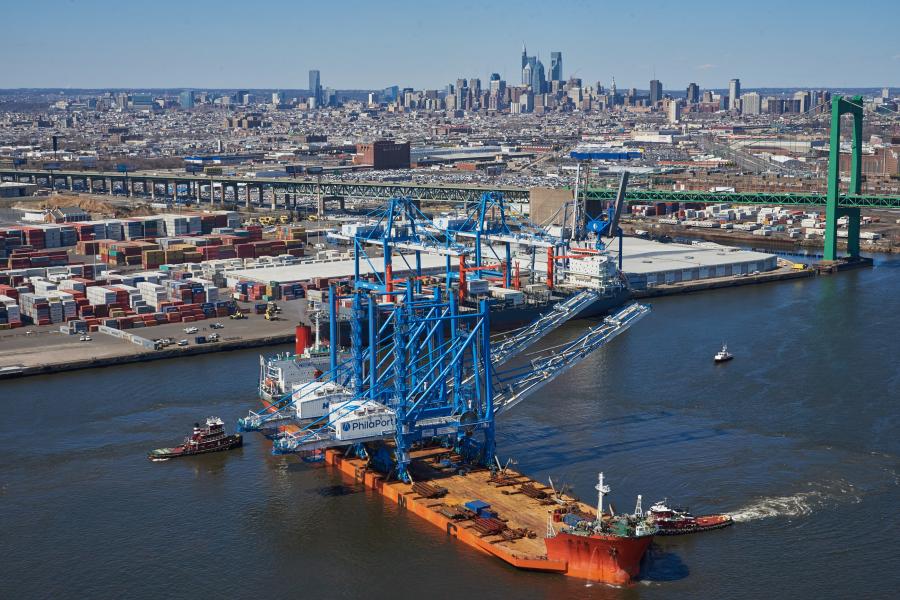 The cranes, some of the largest in the world, were produced by Shanghai Zhenhua Heavy Industry Co. Ltd. With careful preparation, they departed Asia in December 2017. (PhilaPort/Todd Trice photo)

Two new super-post-Panamax cranes making the long journey from Shanghai, China, to the Port of Philadelphia's Packer Avenue Marine Terminal have finally reached their destination. The vessel Zhen Hua 16 arrived in late March, after a more than 90-day trek. 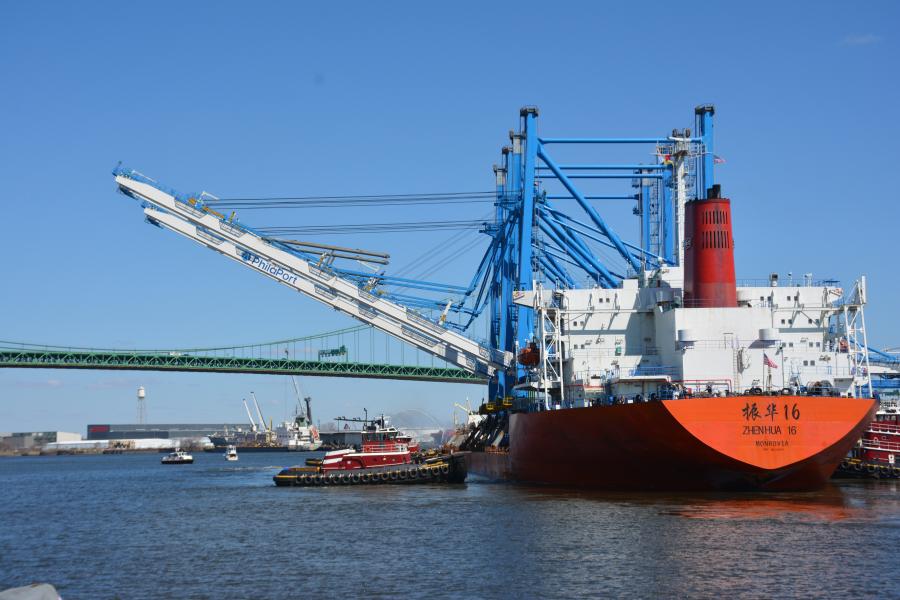 “It was the first major visual accomplishment of Governor Tom Wolf's $300 million port development plan,” said PhilaPort senior marketing manager Dominic O'Brien. “It seemed like a long time for them to get here, but when you consider how far they are coming, it's amazing they make the journey in the time they do.”

The cranes, some of the largest in the world, were produced by Shanghai Zhenhua Heavy Industry Co. Ltd. With careful preparation, they departed Asia in December 2017. After a three-month wait, onlookers gathered to witness the dramatic entrance of the massive cranes first-hand.

“One of our engineers was on the bridge as the cranes passed underneath, and he said it was quite an experience,” said O'Brien. “Other bridge workers also were on the bridge at the time. We had a good crowd on the dock as the ship came in, too, including public officials, marine terminal workers and port authority staff.”

Each crane is 32 stories high at its tallest position, weighing 3,368,659 lbs., or 1,528 metric tons. Cost per crane is $12 million. With booms up, they are 13 ft. taller than the Walt Whitman Bridge and are 30 ft. higher overall than current PhilaPort cranes.

The cranes' impact, as far as future growth potential, can't be overstated.

“Our ocean carrier partners and our import and export customers are excited for the additional capacity these cranes will give us. We will now be able to work ships that can fit through the expanded Panama Canal, so 14,000 TEU ships and bigger.”

Getting to PhilaPort, however, was no small task. In fact, for the first time, both spans of the Delaware Memorial Bridge had to briefly shut down at the same time to make way for the shipment.

“It took place at night, so hopefully not too many people were inconvenienced,” said O'Brien. “Bridges actually sag somewhat when car traffic is on them, so we really needed to shut down the bridge temporarily for operational and safety reasons.”

Shortly after midnight on a Saturday morning, traffic between New Jersey and Delaware came to a halt for an estimated half-hour. The ship passed under the Delaware Memorial Bridge at low tide enroute to Philadelphia. Traffic was allowed to resume crossing the spans once the Zhen Hua 16 cleared.

The bridge closures took place during the overnight period to have the least impact on traffic. The distance from the water level to the top of the cranes aboard the Zhen Hua 16 was more than 188 ft.

In the past decade, vessel size has grown exponentially, creating a new class of container ships known as ULCVs (Ultra Large Container Vessel), with a 10,000 to 20,000 container capacity. Even before the arrival of the cranes, this past winter PhilaPort saw the largest container ship to ever call at the port, the M/V MSC Shuba B, a 12,200 TEU vessel. The new container gantry cranes will be capable of discharging containers from these new, larger vessels. 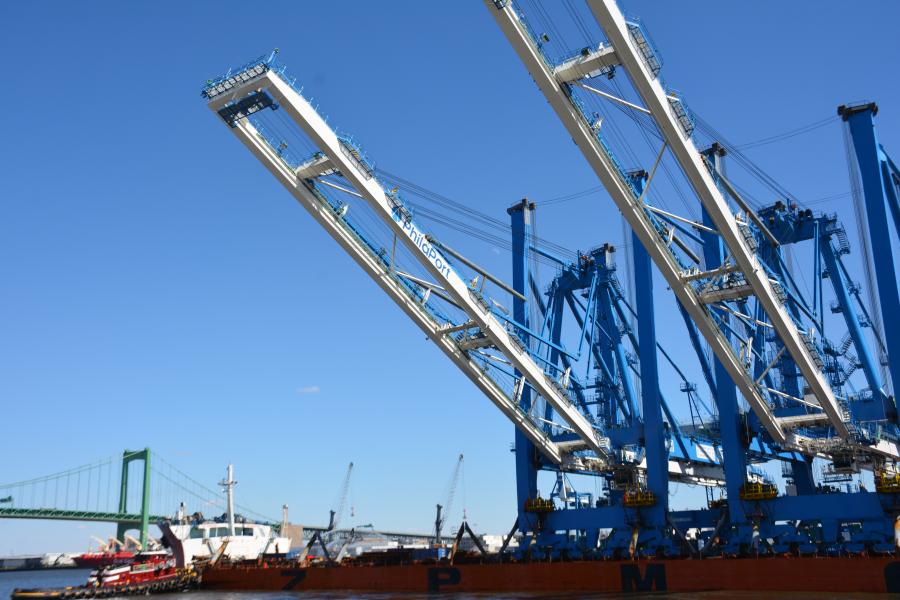 “For [more than] a year we have been working hard to prepare the terminal for these cranes, and it is great to see them here,” said Jeff Theobald, executive director and CEO of PhilaPort. “Last year we hit an East Coast record of 19 percent container growth. To sustain that type of growth, these new cranes are a necessity.”

“The arrival of the cranes is a perfect example of public/private investment into the state's critical infrastructure,” said Wolf. “Every transportation professional knows how important speed to market is to logistics. These new cranes will ensure that we keep pace with other U.S. Seaports, and allow PhilaPort to load and discharge cargo with state-of-the-art equipment.”

As part of the governor's port development plan that was announced in November 2016, Packer Avenue Marine Terminal operator Astro Holdings agreed to purchase one crane and undertake other planned improvements to the facility.

“The port has a huge impact on the economy of the entire region, and these new cranes are another sign that the port is building a very bright future,” said Tom Holt Jr., president of Astro Holdings. “The cranes allow us to handle more cargo from bigger ships, and since we're already setting records for cargo growth at Packer, the cranes are arriving not a moment too soon.”

In the first quarter of 2019, PhilaPort will be adding another two identical cranes, and Astro Holdings another one crane at Packer Avenue Marine Terminal, bringing the total number of cranes at the terminal to seven.

“Pennsylvania's ports are vital to the economic success of the entire commonwealth and I will continue to invest in our assets that strengthen Pennsylvania's economy and support new job growth,” said Wolf. “The new cranes positioned along Philadelphia's waterfront will serve as a visual reminder that business is booming in Pennsylvania.”

Development is scheduled to continue through the year 2020 and is projected to support thousands of jobs and generate an increase of more than $100 million in state and local tax revenues each year.

O'Brien said now that the cranes have been off-loaded and are being methodically assembled, crews are ready to spring into action.

“Our longshoremen and stevedoring partners are looking forward to using these new cranes to work bigger ships and move more cargo. This will create additional jobs and revenue for our region.

“The public seemed to be really interested in the cranes arrival, also. In combination with channel deepening, the other infrastructure components of the port development plan and road and rail improvements in our region, everyone is beginning to understand that we are a dynamic and forward-thinking port that's building toward a better future.” 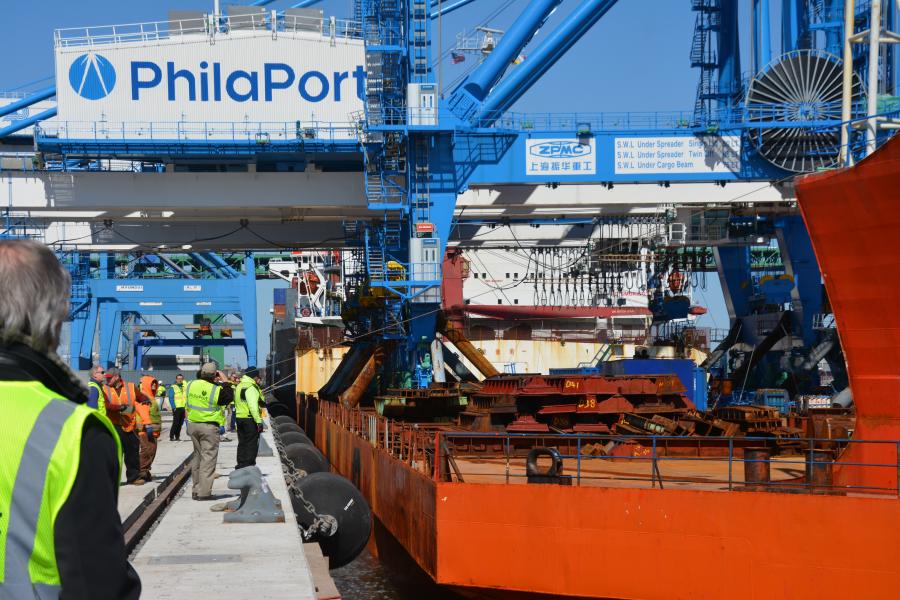 As part of the ongoing construction at PhilaPort, warehouses on dock will be demolished, with new ones built off site to free up acreage for containers. Ship berths will be dredged deeper to 45 ft. to match the 45-ft. channel depth in the Delaware River.

Improvements also include new fenders and crane rail to handle bigger ships, updating the electrical grid in the terminal, and converting two older diesel cranes to electric. The port purchased part of the old Food Distribution Center site in South Philadelphia, and will construct a new warehouse there, to replace the one being taken down at Packer Avenue Marine Terminal.

Ground also will be broken later this year on a 100,000-sq.-ft. warehouse at the Tioga Marine Terminal in Port Richmond. Building a vehicle-processing center for Hyundai and Kia imports at the Southport terminal at the Navy Yard is another major project for port officials.

The Port of Philadelphia is an independent agency of the Commonwealth of Pennsylvania, and is responsible for the management, maintenance, marketing and promotion of publicly-owned port facilities along the Delaware River in Philadelphia, as well as strategic planning throughout the entire port district.

PhilaPort works with its terminal operators to modernize, expand and improve its facilities, and to market those facilities to prospect port users. Port cargoes and the many activities they generate reportedly result in thousands of direct and indirect jobs in the Philadelphia area and throughout the state.