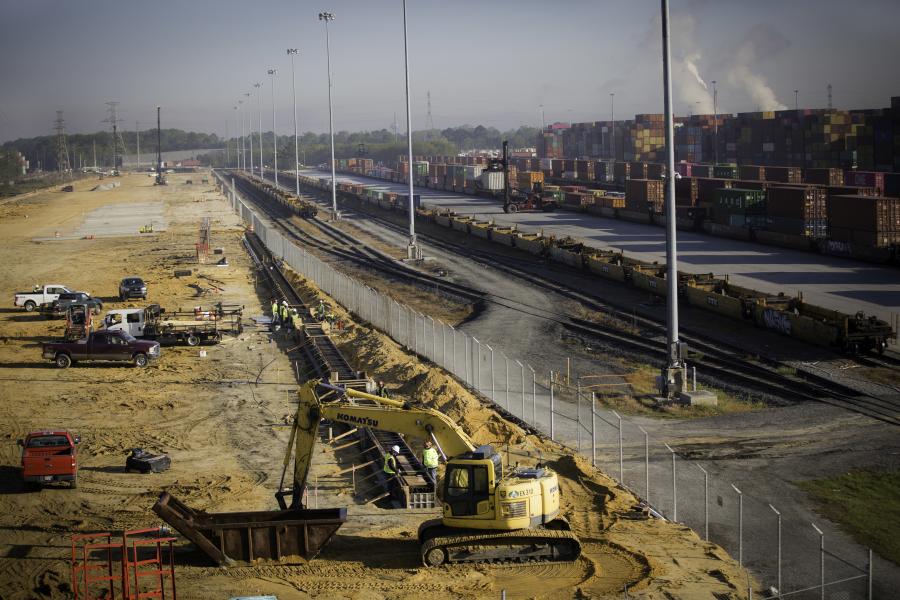 For many years now, Georgia's Port of Savannah (referred to as the port or Garden City Terminal — GCT) has been experiencing a massive growth in business that is seeing more ships dock to unload and receive a variety of goods. To ensure that the container terminal can meet current and future demands, the two-phase, $220.5 million Georgia Ports Authority's (GPA) Mason Mega Rail Terminal (MMRT) was launched on March 27, 2018.

Phase 1 will be completed and open for business in the first quarter of 2020 and Phase 2 should finish up in late 2020. The project is being completed utilizing multiple contracts. The civil infrastructure and the rail installation of the entire project was awarded to Astra Group Inc.; the equipment contract, which consists of delivering eight rail-mounted gantry cranes (RMGs) was awarded to Konecranes Corporation; and the construction of the SR 25 Overpass was awarded to TIC Marine and Heavy Civil. 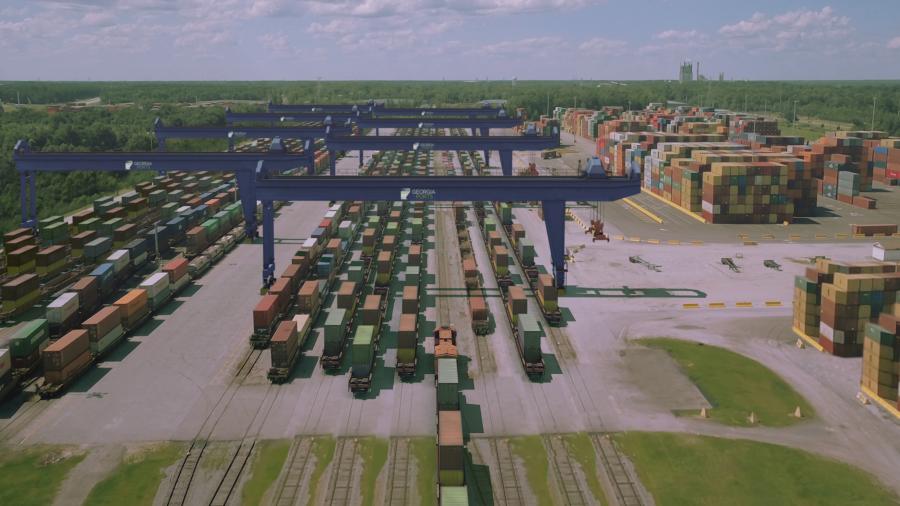 The civil infrastructure improvements include two separate rail bridges, a vehicular bridge over the Pipemakers Canal and a separate vehicular overpass that will span over the port's Gate 1 complex. Each of the RMGs will span nine tracks for improved efficiency to move containers from trains to on-terminal jockey trucks.

The rail project is one of several signature projects aimed at making Georgia the transportation and logistics hub of North America. These projects include the Savannah Harbor Expansion Project, a new inland terminal in Northwest Georgia and a $10 billion statewide transportation improvement plan.

When Phase II of the MMRT is operational, the project will have doubled the port's rail lift capacity to one million containers annually while opening new markets from Memphis to St. Louis and Chicago to Cincinnati. The GCT will have 180,000 ft. of rail and 18 working tracks, which will permit it to better accommodate 10,000-foot-long unit trains, and thus positioning the GPA to rapidly improve service to the Midwest.

The GCT is already the South Atlantic region's busiest intermodal gateway, handling 38 trains per week carrying import and export cargoes. Funding for the project is based on a $44 million U.S. Department of Transportation FASTLANE grant administered by the Maritime Administration, along with direct funds from the GPA. 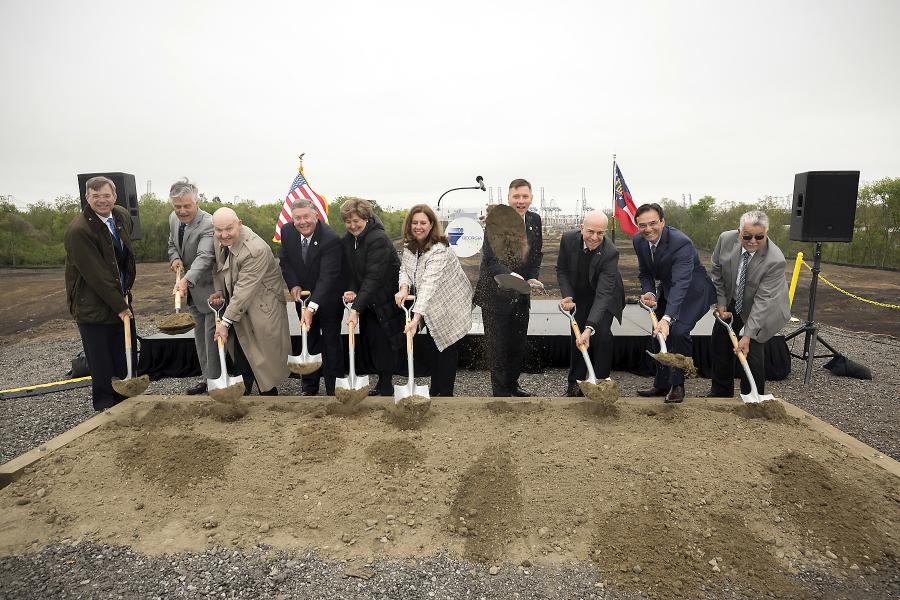 "By 2020, the Mason Mega Rail project will deliver the largest intermodal rail facility for a port authority in North America, part of GPA's 10-year plan to increase overall capacity to eight million 20-foot equivalent container units per year," said GPA chief operating officer Ed McCarthy. "Longer, more cost-effective trains encourage Norfolk Southern and CSX to provide direct, expedited rail service to the Mid-American Arc, stretching from Memphis to St. Louis, Chicago, Columbus and the Ohio Valley. For customers, this opens an exciting opportunity related to our containership schedule — 10 of our 36 weekly vessel calls are ‘first-in' services that call GCT before other East Coast ports. That means cargo owners that ship to Savannah can have their goods delivered by rail to markets such as Chicago before those containers might be offloaded from vessels at ports farther up the coast."

Combining the current on-dock CSX Transportation and Norfolk Southern rail terminals into one facility will provide each railroad with nine 2,700-foot working tracks. The project adds 97,000 ft. of new rail at GCT and increases the number of working tracks from eight to 18. This will allow GPA to bring all rail switching onto the terminal and remove several rail crossings within Garden City, as well as reduce the number of rail interruptions on the busy roadways of Highways 21 and 25. These developments will improve traffic flow while increasing the capacity of rail within the GCT. 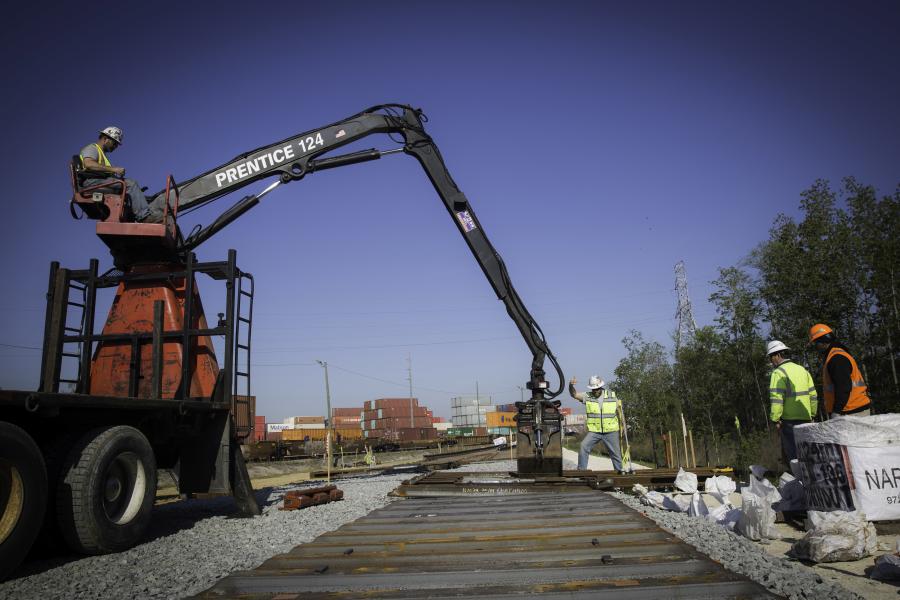 The new rail infrastructure is part of a comprehensive expansion plan that includes the harbor deepening, the single largest ship-to-shore crane fleet in North America, 60 additional yard cranes and expanding truck gates. "Not only are we bolstering intermodal rail capacity, we are adding bandwidth across all points of interaction — from surface transportation to yard and dock transactions," McCarthy said.

Phase 1 is critical for Norfolk Southern as it will be able to send unit trains directly from Savannah to many Midwest locations, cutting 24 hours off the transit time. Phase 2 will allow CSX to also handle unit trains at the terminal.

"A side benefit of the Mega Rail project is that it can free up rail capacity in Atlanta rail yards because cargo can move directly from Savannah to these inland destinations across the Midwest," McCarthy explained. "Not only will this development mean more business for Georgia's logistics network, it will mean retailers and producers across the Midwest will have new access to Savannah's congestion-free container terminal."

"This project will expand rail capacity by 100 percent while reducing impact on the local community and throughout the supply chain," said GPA executive director Griff Lynch. "The Port has the cargo capacity to quickly load unit trains for expedited service to inland population centers. Over the past year alone, our average container moves per-vessel has increased by 15 percent, and exchanges of 5,000 20-foot equivalent container units are now common."

The new intermodal terminal is expected to take more than 200,000 trucks off the road annually.

"This project is a game changer," said GPA board chairman Jimmy Allgood. "Our team estimates the MMR will present a viable new option for many manufacturers, shippers and logistics professionals. Unit trains make direct routes to distant markets more profitable for the railroads, which is a major factor in how the new capabilities of the Mason Mega Rail terminal will improve Savannah's reach." 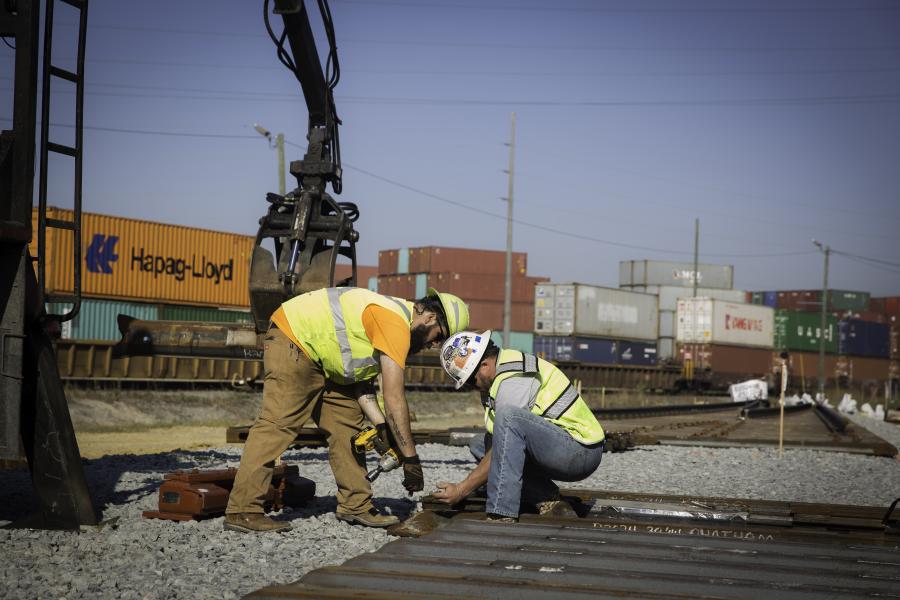 Moffatt Nichol designed the MMRT, whose new track and infrastructure has a 50-year design life. Solid planning is helping to minimize the impact of the construction on port operations.

"This is happening due to strong partnerships, teamwork and coordination with engineers, contractor, railroads and ongoing GPA operations" McCarthy said.

The construction is proceeding on schedule and on budget, and efforts to minimize the impact of the work on port operations are succeeding.

"This project is the premiere example of multiple local, state and federal agencies working together to implement a program that minimally impacts current port operations," said Christopher B. Novack, P.E., the GPA's senior director of engineering.

The port has ample space for the general contractors to store materials and equipment, as well as set up field offices with crews able to work day and night shifts.

"All contractors, engineers and stakeholders are working together with a common goal to complete the project in a timely manner and within current approved budgets," Novack said.

Phase 1, which has several work sites, is approximately 40 percent complete. 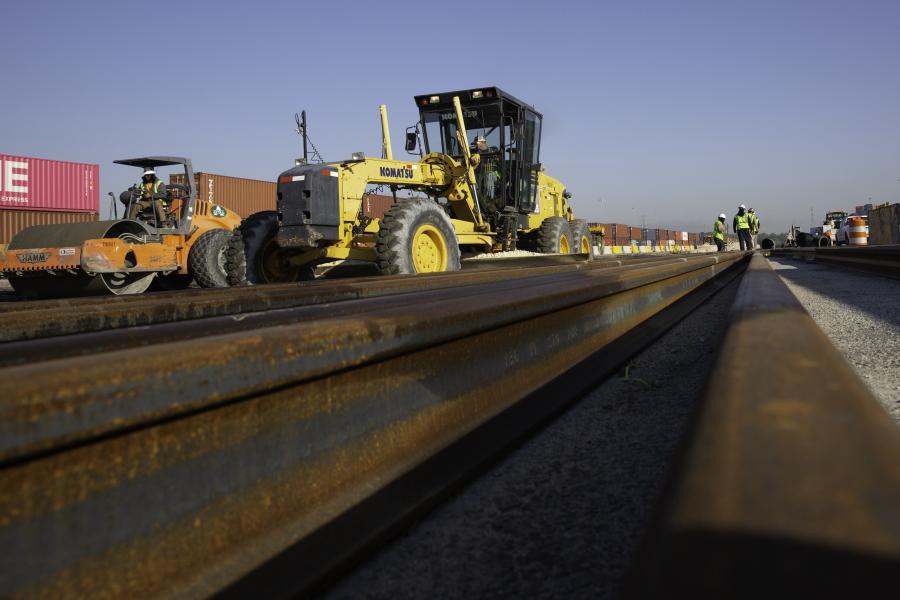 "Civil infrastructure, rail installation and the delivery and erection of the RMGs are taking place simultaneously without significant impact to port operations and no disputes between all the parties," Novack said. "The rail bridges have been constructed without incident. The SR 25 Overpass is currently under construction and is managed by the Georgia Department of Transportation. In order to expedite the construction of this bridge and ultimately the closure of several railroad crossings, GDOT and the city of Garden City agreed to close a portion of SR 25 to construct the bridge without traffic for 12 months. They have no significant challenges with the project due to the proper planning prior to construction commencement."

Phase 2 operations are pressing forward without issue as crews are installing rail infrastructure and erecting the RMGs.

"We have an on-site mechanic to handle routine maintenance and wear and tear issues," said Andrew Lindsay, president of Astra.

In the Georgia area, one the companies that Astra uses to purchase and rent equipment is United Rentals. "With their total control platform, we can accurately track the use of our equipment throughout the entire job site, which is massive," Lindsay said. CEG