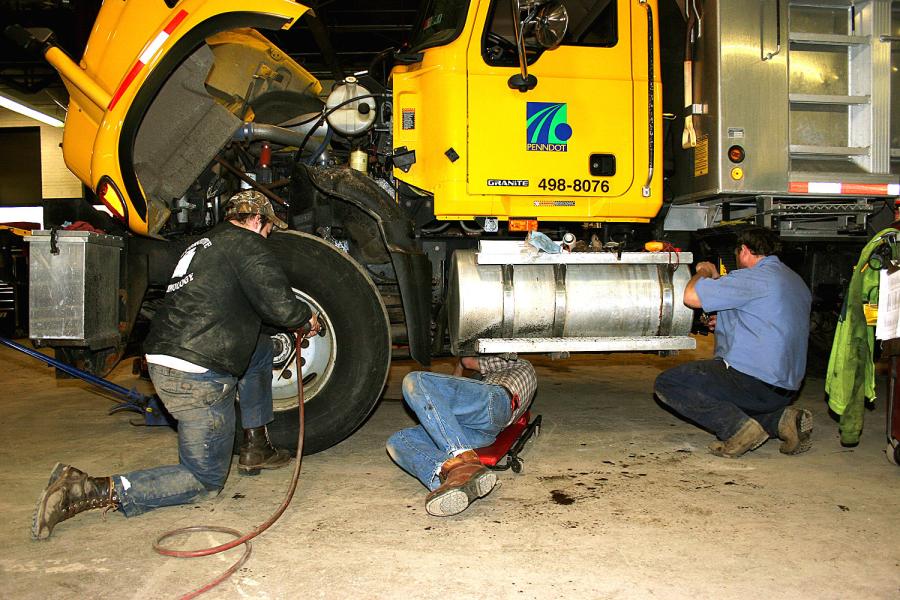 Each day, before a vehicle can be moved, the operators within PennDOT’s Erie County stockpiles go through their 614 checklists — a lineup of about 50 items that must be visually inspected on each piece of equipment before it can take to the road. From the wheel lug nuts up to the lights, turn signals, belts, hoses, oil and wipers, everything gets day-to-day scrutiny. (PennDOT photo)

When a region of the U.S. regularly receives more than 100 in. of snow each year, area residents and drivers can take solace in knowing that their state DOT undoubtedly has experienced snow-removal professionals with access to well-maintained equipment to keep the major roads open for traffic.

Such is the case in Erie County, Pa., located in the state's far northwest corner on the shores of Lake Erie, the fourth largest of the five Great Lakes. And it is that proximity to the lake that is key to the monstrous snowstorms that often bedevil the region from November to April.

Lake-effect snow is simply a fact of life in the waterfront city of Erie, blanketed each year by about 101 in. of frozen precipitation. But, farther inland, those annual totals can be even higher. In fact, the small town of Corry, about 15 mi. southeast of Erie, is the snowiest spot in the entire state with an average of 113 to 117 in. a year, according to a Penn State University study.

"When we get lake-effect snow, it gains altitude, moves in from the west and acts like a sponge, squeezing out more precipitation inland," explained Tom Mello, an assistant maintenance manager of the PennDOT's Erie County Maintenance District 1-2 and one of its four weather monitors. "When that happens, Corry just gets blistered. They may average 113, but we have had seasons where they have easily gotten more than 200 inches of snow."

One key factor in the level of severity of Erie County's snowstorms is whether the lake is frozen. If it is, the chances for lake-effect snow are much lower. But, if Lake Erie is largely open water all winter, the county is destined to be slammed with big storms throughout the season.

Time to Get Ready Is Here

To keep ahead of the area's heavy snowfalls, PennDOT has 38 snow routes and maintains seven stations, or stockpiles, within the county. Spread out over those seven locations are 38 full-size snowplows, seven loaders, a grader and a tough and reliable 1960 Oshkosh snowblower. 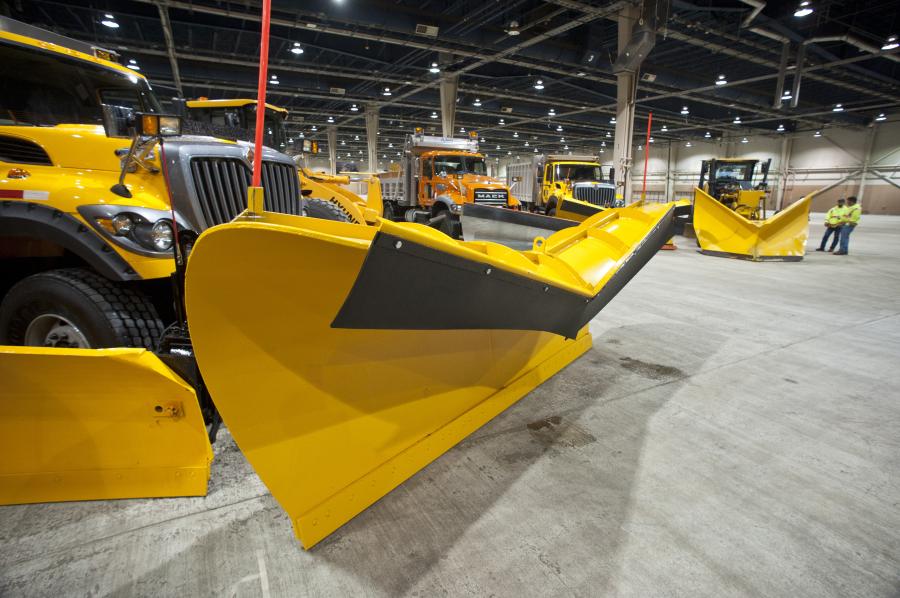 The first week of October is the time that PennDOT mechanics and other shop personnel begin the process of suiting up 10 trucks per week so that all are outfitted and ready to roll by Nov. 1.

In addition to having materials and vehicles stationed and fully operational at each stockpile, PennDOT runs regular eight-hour shifts for its maintenance people. But when the inevitable snowstorms move into the county, Mello said, the agency will alter its schedules so that crews are working in two, 12-hour shifts for 24-hour, seven-day coverage. Operating the 24/7 double shifts is dependent on when snowstorms hit, and Erie County's yearly snows never seem to follow a schedule.

"Traditionally, if it's not snowing, we will begin working our shifts the first Monday after Thanksgiving and will stay on that schedule until the first week of April," he explained. "But with climate change, we are starting to see that our winters are arriving later and staying later into spring, meaning we are remaining together as a unit longer until it's time for summer work."

Each day, before a vehicle can be moved, the operators within PennDOT's Erie County stockpiles go through their 614 checklists — a lineup of about 50 items that must be visually inspected on each piece of equipment before it can take to the road. From the wheel lug nuts up to the lights, turn signals, belts, hoses, oil and wipers, everything gets day-to-day scrutiny.

Among other components inspected daily include:

"When our people put the plows on, they stay on throughout the winter, so you have to continually check the blades for cracks," Mello added. "Examining the bolts and how well they are tightened is important because a plow puts a lot of wear on its vehicle. So, every day during snow events the welding shop is working and the whole shop is active to make certain our equipment is safe to operate."

All Equipment Gets a Bath Day

At PennDOT's main stockpile in Erie a large wash basin is installed where each of the district's winter trucks are brought on designated days to clean off accumulated salt and gunk. Mello said each of the seven stockpiles are free to take a whole day at the basin to thoroughly rid its equipment of salt's corrosive and damaging effects.

Although PennDOT's newer spreader bodies are made of stainless steel, designed to fight off salt erosion, they still pick up salt, brine and other debris that can clog up a machine's components if not washed properly.

"At the end of their shifts, the operators have to totally clean out their trucks," he continued. "If they don't that stuff totally cakes in the spreader and really makes it hard to spread. That also means they need to clean the auger completely so the next operator won't have any problems."

But Mello said the leading headache faced by the maintenance shop is keeping the computer systems in snow removal equipment from malfunctioning. With all the salt and brine flying about while plowing in a big snowstorm, it's inevitable that salt gets into the fittings of their machines and makes hardware and software go haywire.

"If that computer system shuts you down, you have to take it in and get a spare until you have it fixed. Our garages have a great system, though, where they will put those systems onto laptops and tech people quickly figure out the problems."

Ready for the Unpredictable

How well PennDOT's Erie County maintenance shops keep their equipment in top condition is put to the test each winter when it must contend with keeping its three interstates — I-90, I-79 and a short stretch of I-86 — clear and open to traffic.

Of the three, PennDOT's focus is on I-90 which, due to its location, often catches the brunt of the lake-effect snow. Running 46 mi. through Erie County, I-90 also parallels the lakeshore, virtually guaranteeing it will quickly get blanketed in deep snow coming off Lake Erie.

Its continual operation is not only essential to the county, but to the nation's trucking industry, too, as I-90 is the longest interstate in the United States at just more than 3,000 mi. and is a prime mover of people and freight from Boston to Seattle and points in between.

"That is where [PennDOT has] gotten our reputation and media coverage because if I-90 shuts down, that's news," Mello said. "These storms are unpredictable and if you aren't ready for one, you can lose I-90 in 20 minutes. When we got 60 inches in two days at Christmas two years ago, we never lost the interstate and I think that says a lot for our people and our equipment." CEG