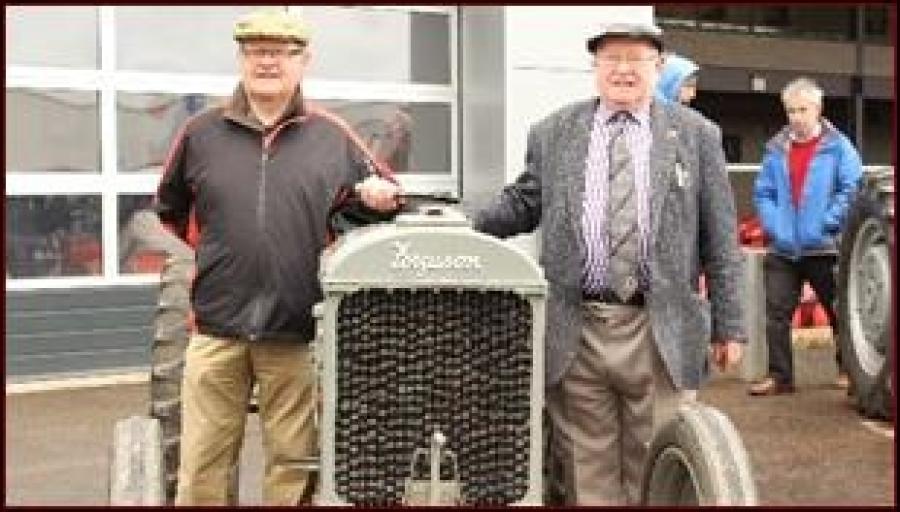 Early 'sit-on' tractors, from the 40s, 50s and 60s hold a special place in many people's hearts; and on Easter Saturday a plethora of bidders gathered at the Euro Auctions site in Dromore, all eager to continue their great love affair and acquire a little piece of history.

The vast private collection of 100+ cherished classic and historic tractors along with a few from other consignees plus around 200 lots of associated equipment that included classic ploughs, harrows, and other bolt-on accessories all went under the hammer without reserve. The main collection was amassed by John Flynn over the past four decades, with many of the tractors having been restored and regularly maintained so are in full working order.

Over 500 bidders pre-registered for this one day special event from 25 countries with over a third choosing to bid online) from across Europe, Canada, the USA and the Middle East but the majority of tractors were ultimately sold as 'one off' purchases to individuals in the UK and Republic of Ireland.

Most of the tractors went for really good money, with several in the collection, as expected, selling for just a couple of thousand pounds each but the star lot was a little grey 1938 Ferguson Brown Type A, eventually bought for £24,500 by Cecil Murphy a retired arable and beef farmer who lives in Hillsborough, just a couple of miles up the road from Euro Auctions' Dromore site. This tractor (BZ 5845) has a Coventry Climax engine and had its original log book and a wealth of documented Irish history and had originally been owned by Cecil's uncle and then his father.

“This Ferguson Brown was a must have tractor for me,” stated Cecil, (who is pictured above (left) with the tractor and his older brother Robert). “There was considerable interest in this particular lot which drove the price up a little but for me it was a must have purchase and it's really good to have it back in the family and for it to remain in Northern Ireland. The price, within reason, wasn't the important factor, it was all about the heritage. This Ferguson Brown has a fully documented history and according to my family folk law, Harry Ferguson visited the farm on several occasions in the 1940s and will have seen it in operation and may well have driven it himself.”

Having been purchased new in March 1938 it was first used on his uncle's then his father's adjoining farms for a number of years before eventually being sold in 1952 for the princely sum of £50 which was used to buy an upgraded replacement. It then went to several other owners before coming into John Flynn's collection. The tractor will now be kept back on the farm which is now let out to tenants and run as a diary operation and the plan is to exhibit it at various regional shows to help promote farming heritage and raise money for cancer charities.

The Ferguson Brown revolutionised farming as it was the first tractor that allowed various implements like ploughs to be connected directly to the vehicle and raised and lowered using a gear system. When originally sold it cost just £224 plus a further £26 for a basic range of implements. By contrast the contemporary Fordson cost only £140.

A rare and highly collectible Ferguson Prototype also created interest at the auction and ultimately went for £8,500 again with real history attached. Found dry stored in barn in Co Wicklow in the 80s it transpires that it was a gift from Harry Ferguson to a former employee at the Banner Lane factory upon his retirement. Believed to be built in the USA in the early 40s, around the time of the split between Ferguson and Ford, it was shipped to the UK for field testing.

The collection also included almost 30 Massey Ferguson tractors amongst which were 35, 65, 135 and 148 models; several stunning examples of the innovative and forward thinking Porsche Junior 108 tractor in 'racing red' as well as other Porsche models including 217's an AP18, a 308, and a 238; plus a pristine example of a 1950 Allgaier R22 tractor as well as several other examples from this manufacturer. Other marques in the collection included Ford Jubilee's plus tractors from David Brown, Deutz, Ferguson, and Fordson.

“This was a unique private collection that included many historically important tractors and we were delighted when John Flynn approached us to manage this unreserved sale on his behalf,” concluded Jonnie Keys Operations Manager for Euro Auctions. “The event created real interest amongst collectors and enthusiasts as some of the rarest and best examples came back on the market for others to care for and enjoy.”

“Over the past four decades John Flynn spent thousands of hours scouring the world assembling the collection but increased business interests elsewhere resulted in him deciding to put everything up for sale but with eventual buyers like Cecil Murphy, they will all continue to be treasured for years to come.”

For details of other agricultural machinery and construction equipment being auctioned by Euro Auctions visit www.euroauctions.com.