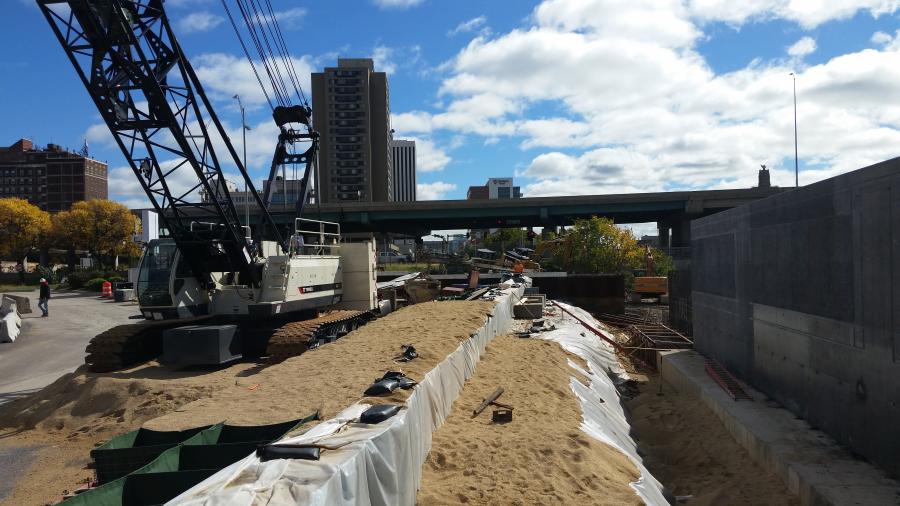 Work began in the summer of 2018 around one of the nation’s leading processed food producers, Quaker Oats. The project will provide the first permanent flood protection downtown, which ultimately will be able to handle the same volume of water that caused the disaster of 2008.

Following devastating floods that inundated large parts of Cedar Rapids, Iowa, in 2008 and again in 2016, the city is now building a massive flood-control system along the Cedar River. City designers and engineers hope it will provide a permanent solution to protect residents and businesses from the river's wrath.

The new, 7-mi.-long system is designed to convey the same amount of water unleashed by the 2008 flood, reducing flood risk through the heart of Cedar Rapids on both the west and east sides of the river.

The system will include a combination of floodwalls, levees and gates, as well as pump stations and detention basins, some of which have already been built, to keep rain and river water from flooding into vulnerable parts of town.

The projected cost of the multiyear construction project is $550 million, or $750 million over 20 years, with the funding provided by a combination of city, state, federal government and private sources.

The city of Cedar Rapids, though, has run into funding delays from the federal government. As a result, in 2018 it approved a 10-year bond to pay $264 million of the total needed for the flood-control system.

Cedar Rapids, a town of approximately 131,000 people, is Iowa's second largest city, behind Des Moines. The Cedar River flows directly through the heart of town in a roughly northwest to southeast direction before making its way to the Iowa River, itself a tributary of the Mississippi. 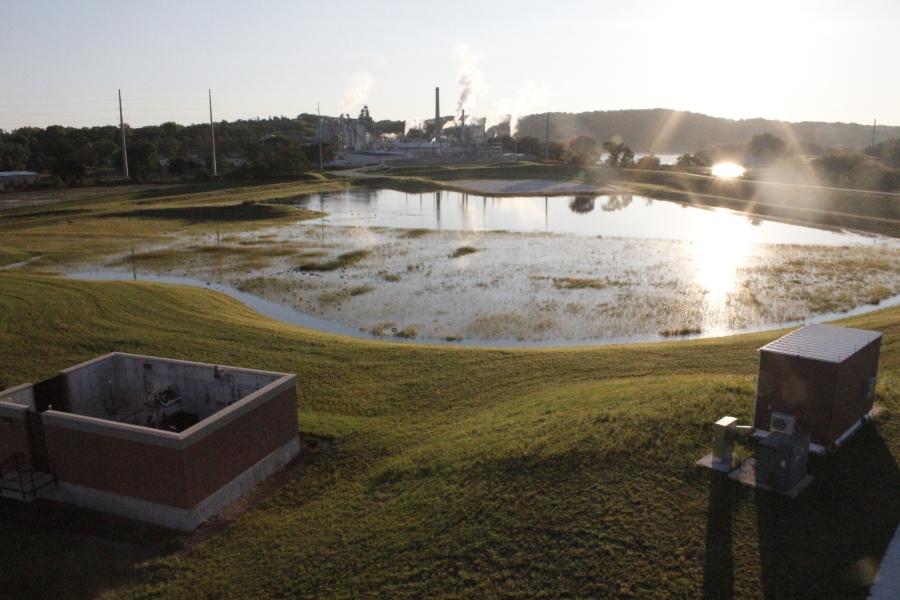 The Cedar is prone to the kind of flooding common in the upper Midwest each spring, when melted snow swells the waterways. During the Iowa spring flood of 2008, the river reached a crest of 31 ft., surpassing the previous record by more than 11 ft.

More than 1,100 city blocks were flooded, with half of them deemed severely damaged. The destruction was estimated at $5.4 billion, although, miraculously, no lives were lost.

"The disaster was really a wake-up call for the city to build a more effective and long-lasting solution to the flood problem," explained Jason Junk, the construction engineering project manager of the city of Cedar Rapids, who is now overseeing work that began at several points along the river shortly before and after the last major flood 12 years ago.

After the 2008 floodwaters receded, the city began planning its efforts to strengthen protections against the next big flood. Levees and pumps along the river were still being built when a big new storm surge came downstream eight years later in 2016.

Although that river crest was the second-highest on record at 22 ft., the city was able to stave off major damage by relying on volunteers and National Guardsmen to fill and place sandbags along the riverbank. In addition, almost 10 mi. of earthen berms and even more sandbags were used to plugs gaps in the levee system, and hundreds of new storm sewer pumps were put into operation.

Since then, the long-term effort to build more permanent safeguards for Cedar Rapids has jumped into hyperdrive with a multifaceted approach. 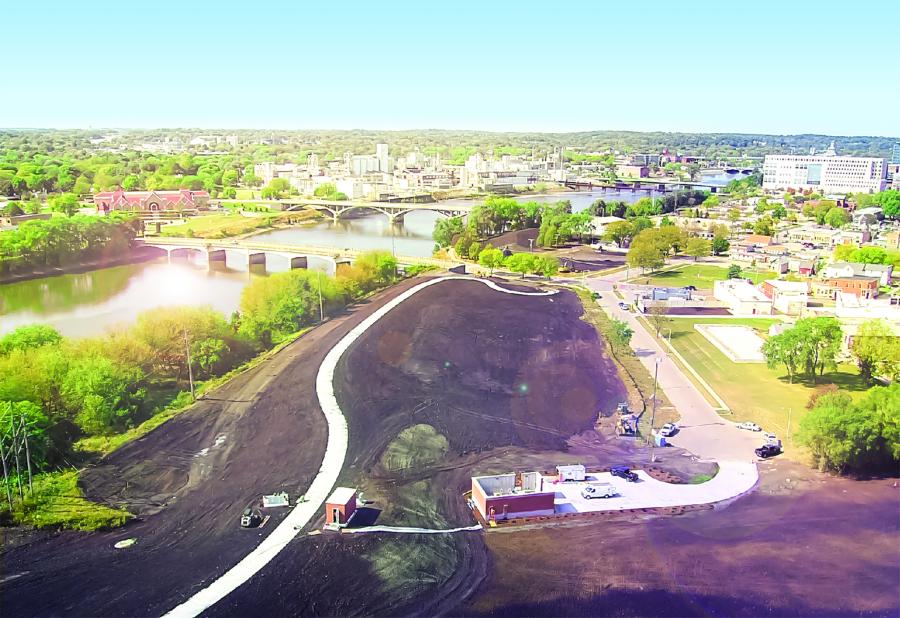 Among the projects completed in 2017-18 were two pump stations designed to prevent water from backing up into neighborhoods through storm sewers; a 4.4-acre detention basin that stores excess rainwater until it can safely be pumped back into the river; and the Sinclair/New Bohemian (or NewBo) levee, a half-mile-long earthen embankment 13 to 23 ft. tall and 130 ft. at its widest point. The levee will provide protection against a river surge up to 20 ft.

"The Sinclair/NewBo levee was the city's first major permanent flood-control structure," Junk said. "We did about $12.5 million worth of work in six months under three different contracts. It was quite a feat to get 120,000 yards of dirt, the pump station and the flood gate walls built in the needed timeframe. It's on the east side and extends from 16th Avenue north around a bend of the river to a big substation."

The new year of 2019 is seeing the continuation of a few more elements of the overall flood-control plan, two of which started last summer.

For instance, on the north edge of downtown, east of the river, lies the prominent 13-story Quaker Oats manufacturing facility. Construction of a $14 million permanent flood wall began on the river in front of the plant in August, Junk said, and is expected to be finished in 2021. Adjacent to the 2,100 linear ft. of wall are pump station upgrades, a water main relocation and a railroad closure gate. 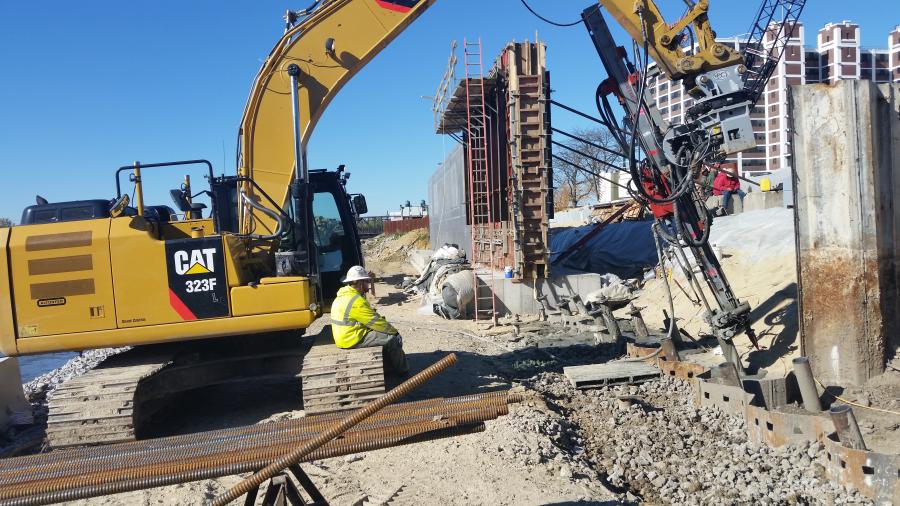 "Currently, we now have two pump stations operational at the site," Junk said. "There is also a sheet-pile wall that gives Quaker Oats protection up to a 100-year flood. Crews are out there adding 13 feet to that wall. Dredging is also happening now [he said in early January] and we are adding H-piles and tension micro-piles, in addition to stem walls."

WRH Inc., the South Amana, Iowa-based general contractor on the job, has little room in which to build the wall — as it is right on the river — but the company's crews are veterans of this type of work, Junk said.

Workers have the benefit of a Terex 110 on site, as well as a smaller Manitowoc. Driving H-piles and redriving sheet piles make up most of the work, Junk added, and several different pieces of earthmoving equipment also are being used along the riverside.

"We want to get the work done on the south pump station because with the winter weather right now, the river is completely frozen over and there is a low risk of flooding," Junk said. "We are also working on the stem walls around them. You could go out there today and we could be driving H-piles in one area, pouring footings in another and doing a stem wall in a third section."

Cedar Rapids is made up many distinct neighborhoods, including the riverside Czech Village and New Bohemia districts, both of which are particularly at risk from flooding. Along with the downtown, the two areas are now seeing flood-control construction along the Cedar River.

Czech Village is located along 16th Avenue SW, south of the Cedar River and downtown Cedar Rapids. It is home to many Czech-Americans and Czech-themed businesses. The main building of The National Czech & Slovak Museum & Library, one of the city's major tourist attractions, was directly on the river and was badly damaged in the 2008 floods.

It has since been relocated a few blocks away, but the disaster provided yet another reason for Cedar Rapids to build effective safeguards against a big flood.

The $8 million work on the Czech Village levee includes ongoing construction of the half-mile-long structure, which is engineered to hold back a river surge of up to 19.5 ft.

The levee is being built at two points: The first section will run from the city's solid waste agency to Bowling Street SW, while the second will be built from Bowling Street to 16th Avenue SW. 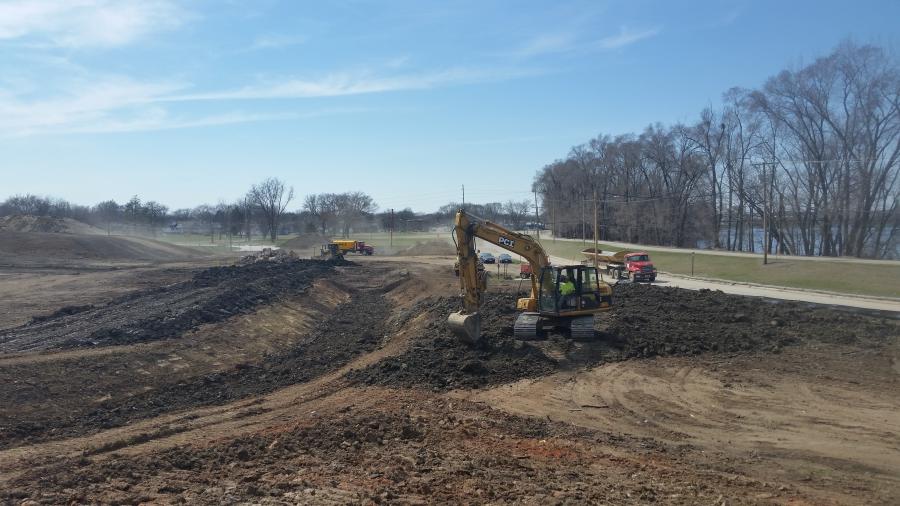 The first portion of the levee is well under way, Junk said, with completion scheduled for the spring, although he added that will depend on how quickly winter ends in east-central Iowa.

"They have about 70 percent of the levee constructed," he said in early January. "The crews had to import common fill to build the road over the levee, then with warmer weather they will pave and finish that portion. Work on the second part of the levee started late in the year and will be done in 2020. There is 300 feet of sanitary sewer to be installed, but the contractor can do that preliminary work in cold temperatures."

Both halves of the Czech Village levee are being built by Peterson Contractors Inc., located in Reinbeck, Iowa.

"One hundred percent of the natural impervious material, or blue clay, being used at the levee is imported, so a lot of the equipment on site are tandems, side dumps, dozers, sheep's foot rollers and excavators to dig the inspection trenches," Junk added.

The city's coffers also were getting low, he said, meaning that after these two flood projects are done, Cedar Rapids probably won't let anything out for bid for another couple years. Exceptions would be minor utility relocation work and prepping for more permanent flood protection.

Major New Bridge in the Future

Perhaps the biggest project in the city' future, to begin in three or four years, is the replacement of the Eighth Avenue bridge, a major route over the Cedar River that carries traffic into and out of the downtown business district.

Junk said that the old, low bridge will be used as a construction staging area for a new structure, which will raise the traffic deck above the 2008 flood volume.

Work will most likely begin no earlier than 2023, and when it is finished, the old bridge will be demolished.

Meantime, the U.S. Army Corps of Engineers is working on separate flood-control initiatives on the east side of the Cedar River. Junk said the federal agency is set to let bids in the late spring or early summer on roll-out gates across a couple roads and pumps for pump station projects. Most of that work is expected to be done in 2020-2023.