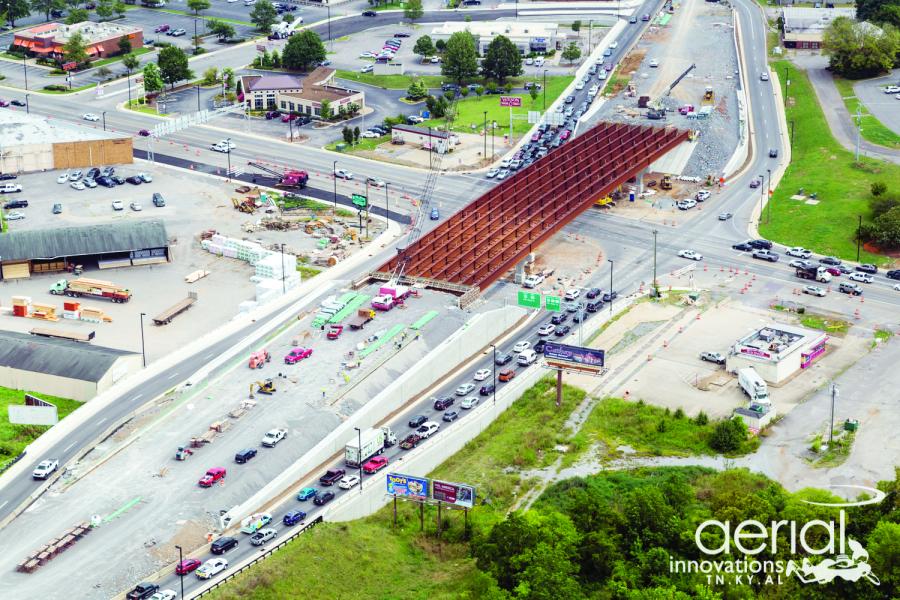 Installation of the giant girders connecting the north and south sides of the so-called “Bridge Over Broad” has required a great deal of planning and effort. (TDOT photo)

A $17.6 million project that will reduce congestion at one of Tennessee's busiest intersections remains on track in Murfreesboro. The work involves separating the intersection of state Route 1 (Broad Street) and state Route 10/96 (Memorial Boulevard/Old Fort Parkway) in Rutherford County, and calls for a new bridge on Memorial Boulevard, which will create an overpass over Broad Street.

“Murfreesboro is one of the fastest growing cities in the U.S.,” said Kathryn Schulte, Tennessee Department of Transportation (TDOT) spokesperson. “Keeping traffic moving is extremely important to help support the rapid growth. This project will provide much needed congestion relief to the area.”

The Nashville Metropolitan Planning Organization identifies this intersection as the most congested in Murfreesboro. The Average Daily Traffic (ADT) on Old Fort Parkway/Memorial Boulevard is 27,240. The ADT on Broad Street is 31,420. This means nearly 60,000 vehicles pass through this entire intersection every day. By 2034, the ADT is projected to be 72,740.

Construction on the high-profile project began in January 2014.

Plans include enhanced lighting, landscaping and aesthetic treatment of retaining walls. Other improvements to Broad Street, Memorial Blvd and Old Fort Pkwy include sidewalks and curb and gutter.

According to Jay Wood, senior project engineer of the architectural, engineering and consulting firm HDR Inc., moving more than 60,000 vehicles as safely and efficiently through the intersection as possible has been one of many construction challenges.

“The city of Murfreesboro has a long and proud history,” said Wood. “We were tasked with installing new utilities, while maintaining function of the existing services. Unfortunately, some of these systems had been in service for multiple decades and there were no accurate as-built plans. We literally had to find the existing systems and then determine the best away to avoid them.

“Also, there's the physical geology of Murfreesboro. The city has large rock formations at varying depths. We never questioned if we would hit rock. However, we never knew if the rock would be inches deep, or several feet deep.”

General contractor Bell & Associates completed setting the girders for the center span on the overpass the first week of August, allowing subcontractor Gilley Construction to install the stay-in-place deck forms and reinforce steel for the bridge. The contractor also has crews building parapet walls on the western abutment. In addition, Civil Constructors has crews installing storm drainage in various locations and placing borrow material for the eastern bridge abutment.

Key tasks yet to be carried out include the completion of the bridge deck and parapet rails, paving the eastern and western abutments for SR-96 (Old Fort Parkway and/or Memorial Boulevard) up to the binder course and finishing the new curb and sidewalk on the west side of SR-1.

Crews also must mill and repave the center portion of SR-1 up to the binder course, install the landscaping and its irrigation system and install the new traffic signals at the Broad/Memorial and the Broad/Lytle Street intersections, along with placing the surface lift of asphalt on the entire project and placing the permanent stripe.

Wood said that demolition work on the project has been fairly predictable; however, crews did stumble upon one glitch.

“The existing concrete roadway for SR-1 was built sometime around 1950 with an integral curb,” said Wood. “Years of asphalt overlay had hidden this curb from view, but one of our contractors found it when they were exposing the edge of the road. We subsequently had to saw cut and then remove this old curb in order to leave us with a clean joint line. The widening tapers in the four quadrants of the intersection now tie to this joint line.”

Because the city is situated on a large rock formation, excavation work has been difficult.

“Explosives are not allowed under any circumstances,” said Wood. “So, rock removal was accomplished in large part by the use of hoe rams. Some days the contractor would literally beat on rock for 8 to 10 hours and only lay 16 to 24 feet of conduit, storm drain and water line. Other days, they would beat on a boulder until it was small enough for them to remove it with a track hoe bucket. For comparison's sake, 'small enough' means it was about the size of the hood on your average car.”

Wood said the abutments for the bridge are composed primarily of borrow material consisting of varying sizes of limestone rock mixed with dirt.

“The ramps are held in place by multiple retaining walls. The walls have a two-foot wide layer of #78 stone directly behind them for improved drainage capabilities. Behind is a select backfill layer of #4 stone, which runs away from the wall on a 1:1 slope.”

Installation of the giant girders connecting the north and south sides of the so-called “Bridge Over Broad” has required a great deal of planning and effort.

Advanced warning messages were put in place several days before the closure, with detour signs posted during the weekend construction. Drivers were advised to plan ahead and seek alternate routes to access the downtown area while the work was carried out. Throughout the process, crews recognized the critical nature of the task at hand.

“In a situation such as this, you plan for the worse, and hope for the best,” said Wood. “There are multiple things that could go wrong, such as delivery delays, equipment failures, inclement weather, etc., so Bell decided to be cautious with its approach. The last thing they wanted was to be pushed to open the intersection on Monday morning with an un-spliced girder hanging in the air.”

The first step was for the girders to be shipped from Bowling Green, Ky., and navigate through Nashville traffic. From there, the contractor used two cranes to pick and lift the individual girder into place.

“Operators in the cranes and men in lifts worked together to align the bolt holes on the splice plates. Each splice has a total of 216 bolts, and there are two splices per girder. There are 144 bolts in the web, 48 bolts in the top flange and 24 bolts in the bottom flange. Keep in mind that these center girders are 142.50 feet in length, and Bell had only two inches of lateral tolerance to shift and align these massive structures.

“Things are tight to say the least,” said Wood. “Once the splices were sufficiently pinned and the girder has been secured, the contractor began installing enough cross frames to insure lateral stability between it and the adjacent girder. The adjacent girder would then be set in a similar fashion and the remaining cross frames between the two would be installed. This process continued until all four girders were in place.”

Regarding improvements to Broad Street, Memorial Blvd and Old Fort Pkwy, Wood said all facilities will receive new sidewalks, along with curb and gutter. The work is considered fairly routine, and no issues are anticipated.

“We have been pretty fortunate as far as weather. We have missed days due to rain, ice and snow, but it hasn't been excessive in nature,” said Wood.

By creating a single point urban interchange, crews are helping the city accommodate continued growth in the region. According to the most recent United States Census Bureau data, Murfreesboro is, in fact, among the 15 fastest-growing cities in the country. Murfreesboro came in at No. 10 nationwide, with the city expanding by 4.7 percent, and more than 131,000 people residing in the area. The census data also found Nashville is now the largest city in the state of Tennessee with a population of 660,000, surpassing Memphis by just 7,000.

As work moves ahead on the project, motorists are urged to continue using caution, reduce speed and be alert to changing road conditions in the construction zone. All work is expected to be completed by the end of 2017.