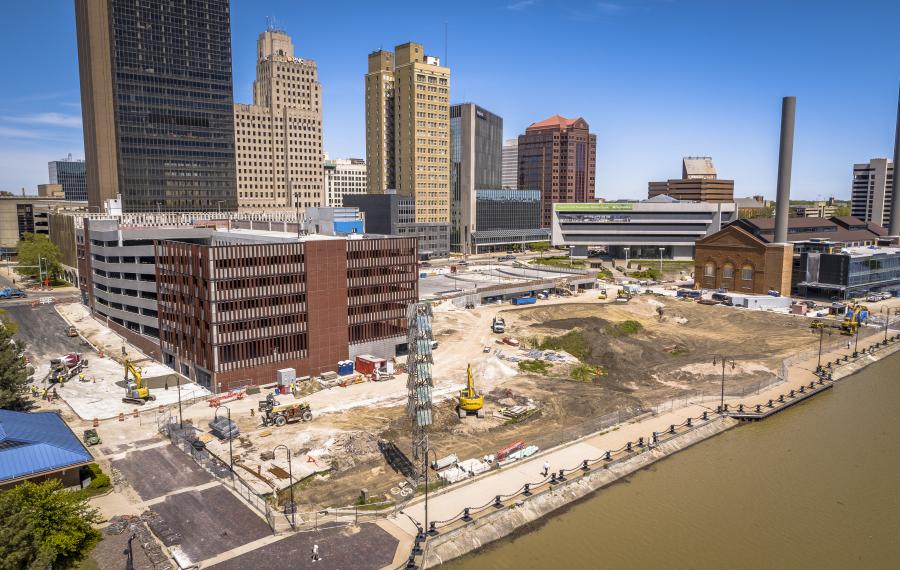 Construction and renovation of ProMedica’s new Downtown Headquarters project in Toledo will soon wrap up.

Construction and renovation of ProMedica's new Downtown Headquarters project in Toledo will soon wrap up. The $80 million project is being managed by the Rudolph Libbe Group. The first group of nearly 1,000 employees of the Ohio health care provider will move into the two-building campus starting the weekend of Aug. 4, with three additional move-in phases to follow.

The work encompasses a seven-story parking garage, the renovation of a historic steam plant built in 1896 and the renovation of the existing top three floors of the former Key Bank building — all are connected. The new headquarters is located next to Toledo's Promenade Park and the city's riverfront. Ground was broken on Oct. 28, 2015 and final delivery of the entire project is scheduled for the end of August.

“Our move to downtown will help ProMedica be more connected, more efficient and more effective as an organization,” said Randy Oostra, president and CEO of ProMedica. “At the same time we hope it will serve as a catalyst in the ongoing revitalization of downtown Toledo.”

ProMedica, a not-for-profit healthcare organization serving northwest Ohio and southeast Michigan, operates a 12-hospital system and has more than 15,000 employees. ProMedica received federal, state and local support in the form of tax credits, low interest loans and grants to support the historic preservation; and new development and job creation incentives to help fund part of the project.

“ProMedica has incorporated a goal to engage minority, veteran and women-owned businesses in at least 15 percent of contract and subcontract work related to the headquarters construction,” according to a company press release. “It will additionally donate $200,000 to the Toledo-Lucas County Port Authority's Diversified Contractors Accelerator Program.”

The Steam Plant was designed by renowned architect Daniel Burnham, chief architect of the 1893 Chicago World's Fair. It was closed down in 1985. Promenade Park, established in 1972 as a riverfront greenspace and venue to hold cultural events open to the community, is based on riverfront parks in France. ProMedica is preserving and refurbishing a French kiosk, known as the Colonne Moriss/Betty Mauk Memorial, which will be placed back into the park as construction is completed. The Key Bank building, built in 1981, is “The Junction” for the new headquarters.

J. Bernie Merritt, ProMedica's project engineer, said that the Junction will house the first of the new employees, with the move in set for Aug. 4 and 11 and the final moves in to the Steam Plant to take place on Aug. 18 and 25th.

“We have close to 20 different locations we are moving people from — with some locations housing one or two people to others holding several hundred,” he said. “Having everyone here will make things more efficient and will result in a lot of synergies. We call it 'chance encounters,' so if you're getting a cup of coffee, you might see someone from finance and chat with them instead of sending an email or making a phone call. We also have many leased properties, so the new headquarters will reduce our costs.

“With nearly 1,000 of our folks moved to downtown,” he said, “there will be more people going out for lunch and dinner and shopping —helping to bring more business activity to the area. We also have a few people interested in moving downtown, which has recently experience an influx of new businesses and residents.”

The new headquarters was designed to be energy efficient.

“They're built to the current code, which is extremely energy efficient,” said Merritt, “through LED lighting and setbacks on the HVAC controls. We also have low-e glass and insulated walls.”

The floor plans of each building are efficient, with the junction set-up in a triangular shape, including odd angles, which make for interesting offices and work stations.

“Our architects have done a great job of ensuring that there is no wasted space and realizing a dream of ProMedica,” said Merritt. “The steam plant, certainly with the smokestacks, posed the biggest issue that cost us time and money to repair. We weren't originally planning to take the smokestacks down, but it worked out for the better. The walls of the plant were in rough shape by 30 plus years of neglect — it experienced a lot of damage through many winters of being wide open to the elements with no windows or roof. It was a quite a challenge to stick four floors inside the historic structure.”

The parking garage, with 123 spots underground, is an integral part of the park, complete with lawn, trees and an in-ground fountain that can be used by children to cool off on hot days.

“We have utilized a lot of local artists to help reclaim materials and show off what Toledo has to offer,” said Merritt, “and east of the garage is a further extension of the upper park. We took great pride and care in preserving and adding to some of the great features downtown and handing that over to the city. The underground garage portion of the parking deck has a green roof/park with pavers and is level with Summit Street. As you make your way toward the river, the grade falls off from Summit Street. The Garage as well is not just an ugly grey structure, but one that blends in well with the downtown.”

There also is a large screen on the North side that can broadcast local events. Parts of the smokestacks were used by local artist Dane Turpening and Kristine Rumman to create a piece called Echo, that one can walk through. Erwin Redl and the Paramedia team, another local artist, created an LED light display at the parking garage stair/elevator tower to create a nice visual image at night.”

Rudolph Libbe started the work with the relocation of utility lines, which was followed by renovation operations on the steam plant. A construction fence was installed around the site perimeter in December 2015 and construction began on the Promenade Park Depot in February 2016. The Steam Plant foundation and structural steel were completed last summer and fall. The roof and east wall of the plant were removed during the winter of 2015 to 16. Work on the steam plant foundations and structural steel began in the summer and fall of 2016 and the parking depot excavation and concrete work were completed in late 2016. The interior remodeling of the bank building — The Junction — was completed in early 2017.

“Challenges included the demolition of a portion of the existing steam plant shell,” said Brian Lamerson, Rudolph Libbe's project manager, “which included removing the roof and the entire east wall along with two hundred-foot-tall 100-year-old smoke stacks. We also installed structural steel in an existing building working around a temporary structure supporting the building shell. We were working on a tight site, so logistically it's challenging to bring materials in and out. We scheduled deliveries a couple weeks in advance to keep traffic running smoothly.

“We also were working in areas with many buried unknown utilities and old building debris,” he said. “The Maumee waterfront has quite a history. There have been multiple buildings torn down over the years, with some debris still in the ground, but we worked around it during our excavation, foundation and utility work. We performed a great deal of investigative work so we did not disturb any operational utilities. We used hydro-excavation, reviewed old historical as-built drawings and researched the site with the city of Toledo.

“At the Steam Plant, we demolished the old roof, east wall and existing smoke stacks, all while maintaining the shell of the existing building. We used an outside engineer to develop bracing plans so we could perform that work.”

Promenade Park served as Rudolph Libbe's “trailer city” which is housing field offices, parking for equipment, materials storage, and subcontractor set-ups. The crews have been working year-round on the project.

On peak days, there were approximately 200 construction workers on site on all three projects, working primarily day-shifts.

In addition to being the construction manager, Rudolph Libbe Inc. handled the concrete foundations and slabs.

The work site is close to Rudolph Libbe's main shop/yard, with the company serving as the lead contractor.

Lamerson is proud of the work that his crews are completing.

“The project is running smoothly and on schedule,” he said. “We've added another historic building to our resume, and each one is unique.”