Since 2017, Central Texas Stone and Aggregate LLC has been on a mission to increase its production of rock and aggregate to support construction jobs throughout central and southern Texas under the guidance of General Manager Cole Bland.

"The other 30 percent was sold to other construction companies. I believed we were missing out on a huge opportunity to increase our material capacity and build our customer base," he said.

Bland set out to double the quarry production from its current 600,000 tons and introduce operational efficiencies with help from modern equipment and advanced technology.

Central Texas Stone and Aggregate quarry crews relied on one wheel loader to load customer trucks and another loader to feed the crusher. The quarry was operating much the same as it had since the 1990s — one shift, 200 to 250 tons an hour, producing about 600,000 tons annually. 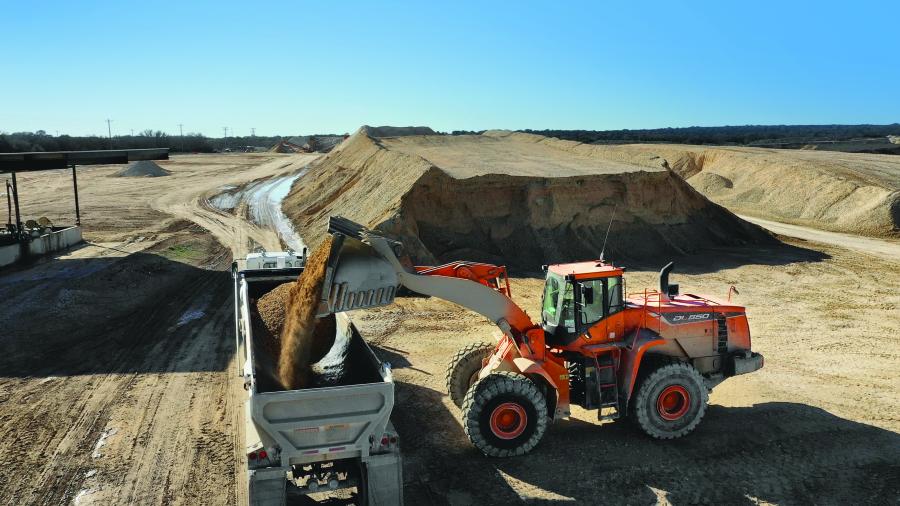 In 2018, under Bland's expansion plan, the company needed a second wheel loader to keep up with demand. Bland called the president of Venture Drilling Supply, Colt McCarthy, about ways to increase productivity.

McCarthy recommended a Doosan DL550-5 wheel loader with a 7.5-cu. yd. bucket capacity. The DL550-5 is a workhorse with impressive power, tipping capacity and breakout force. It's uniquely well suited to material handling in quarries such as Central Texas Stone and Aggregate. Venture Drilling Supply also was able to customize the DL550-5 loader by pairing it with a larger bucket and counterweights. That adjustment allowed the quarry crew to fill trucks with 20-plus tons of gravel in just two passes.

In 2019, Central Texas Stone and Aggregate averaged about 190 trucks per day. On its busiest days, there were 50 to 60 trucks and trailers waiting in line for materials — and the pressure on the wheel loader operator is huge.

"Not all haul capacities are the same," Bland said. "Typically, wheel loader operators visually estimate the total based on scoop counts. But not all trucks and trailers are the same size."

Two similar-looking trucks could have different capacities because of different add-ons and trimming. One could be 18 tons and the other 16 tons while trailers can range from 21 to 24 tons.

"If the truck is sold by the load, drivers might not be too picky if weight is a little more or less than, say, 23 tons," Bland said. "But some drivers are paid by weight. So when a truck is under- or overloaded, the driver has to return to the pit to adjust the load appropriately. When there are 50 to 60 trucks in line, chaos quickly ensues."

Looking to improve accuracy and reduce the chance of over/under weights, Bland once again called McCarthy, to talk about a technology that he had seen at a recent aggregates conference. Specifically, he wanted to know more about the Trimble LOADRITE L3180 SmartScale for wheel loaders.

The Trimble LOADRITE L3180 SmartScale is offered as an option by Doosan through its dealers such as McCarthy's Venture Drilling.

The L3180 SmartScale is an onboard weighing system designed to optimize loadout, track productivity and prevent overloading. It measures load weight lifted by the wheel loader bucket using multi-axis inertial measurement unit (IMU) sensors, transducers, Wi-Fi and GPS. The sensors and hydraulic pressure transducers are installed on the loader's lifting arm mechanism of the bucket and send information to the LOADRITE indicator in the cab, which converts the data to a digital weight reading. The operator has instant evidence that his estimates are close.

In the cab, the operator can see production metrics using a 5.7-inch color touch screen. An added bonus is that an eTicket feature sends load tickets via email to drivers. The system is able to deliver precise data — even in rough terrain — technique and machine movement using proprietary weighing techniques.

"It took a day or so to install and calibrate the SmartScale on the Doosan loader and we were ready to go," Bland said. "Our lead loader operator loves the system. It's given him greater confidence that he's loading trucks with accuracy and speed — regardless of truck bed size or material."

Since implementing the SmartScale, the team at Central Texas Stone and Aggregate has cut over/under loads from 8 in 100 to fewer than 1 in 100.

Bland said he's seeing many benefits from the technology.

"On a busy day, having trucks returning to the pile to adjust loads is costly in both time and customer satisfaction," he said. "Without the SmartScale, it could potentially cost me hundreds of dollars a day in time and fuel. With this new system, our customers are much happier with the efficiency that we can get them loaded and on the road to their jobs."

The L3180 has also provided some checks and balances to the quarry operations. Bland said that one day recently, his crew was getting fluctuating weights on its truck scale compared to the SmartScale weights.

"When we checked the truck scale versus the weight shown on the SmartScale, we confirmed there was an issue with the truck scale," Bland said. "After more investigation, we found a hydraulic leak."

The Central Texas Stone and Aggregate quarry continues to grow, adding another 250-plus acres in 2019. The total quarry is more than 500 acres. In 2019, the quarry produced 1.3 million tons operating at 350 tons per hour.

"Higher production and technology have helped us expand our customer base and be more competitive, which was exactly the goal we were hoping to achieve," Bland said. "I strongly believe that quarry owners would benefit greatly by utilizing the SmartScale for loading trucks. It gives loader operators confidence, minimizes customer turnaround time and drives productivity."