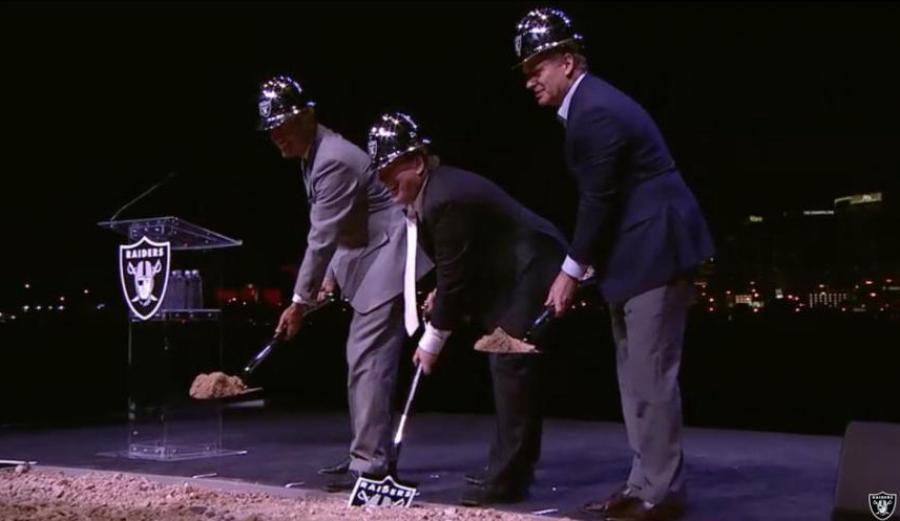 Construction work on the Oakland Raiders' Las Vegas Stadium has so far exceeded the targets for minority and women hiring and small business participation.

LAS VEGAS (AP) Construction work on the partly publicly financed Las Vegas stadium that the Oakland Raiders will call home in two years has so far exceeded the targets for minority and women hiring and small business participation.

The team's lead contractor on Feb. 15 told the public entity overseeing the $1.9 billion project that the targets were surpassed during the initial work at the site, which began at the end of last year. The state law that authorized a tax increase to partially pay for the stadium calls on the team to ensure the greatest possible participation of the local community in the design, construction and operation of the facility.

Lynn Littlejohn, director of community affairs for Minneapolis-based Mortenson Construction, told the Las Vegas Stadium Authority board that minority and female workers have performed 46 percent of construction work hours. She said the site on average sees 90 workers a day, but that number will increase to about 500 by the end of 2018.

Under the community benefits plan that the Raiders presented to the board, minority and female workers are to carry out at least 38 percent of construction work hours and 55 percent of operation hours on event days. The plan also calls for 15 percent of the construction work to be subcontracted to local small businesses, as required by the law that allowed for the tax hike.

Littlejohn said more than $160 million worth of construction work has been awarded, and $28 million, or 18 percent, of that has gone to small businesses.

“We are off to a good start,” Littlejohn said. “We definitely have a long way to go, but we feel good about how things have started and the momentum we have starting the project.”

“It's always better to start off ahead than it is to have to play catch up,” he said.

The Raiders want to start the 2020 season at the new 65,000-seat domed venue across the freeway from the Las Vegas Strip.

The board also selected the leader of a committee tasked with ensuring that the community benefits plan is followed. Board member and president of the Urban Chamber of Commerce, Ken Evans, will lead the group, whose other six members were appointed by the Raiders, Nevada Gov. Brian Sandoval, the leader of the state senate and the speaker of the state house.