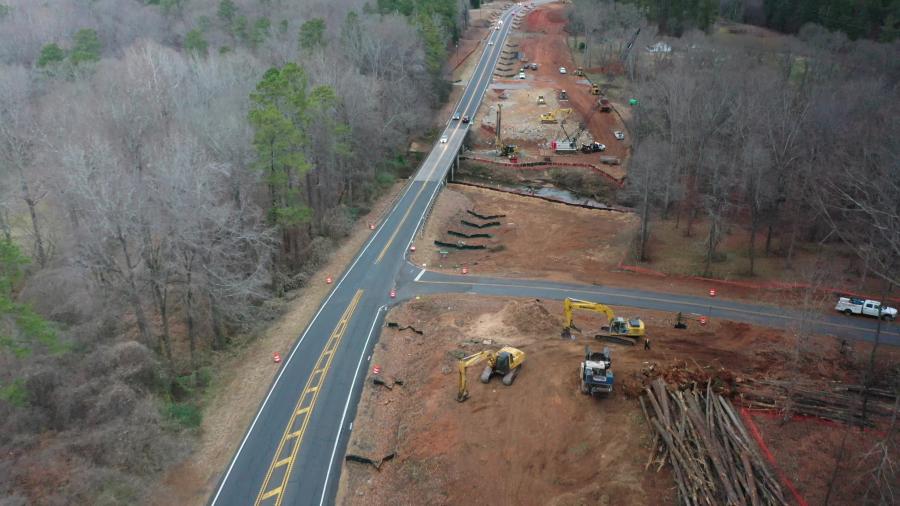 Crews from E.R. Snell Contractor Inc. began the demolition of the existing 250-ft. long, two-lane bridge on State Route 11 on Aug. 5 as part of the Georgia Department of Transportation's $5.3 million bridge replacement project.

The bridge project is taking place in an area between the town of Bethlehem and city of Monroe. The work started in December 2019 and is scheduled to be delivered on Oct. 30. 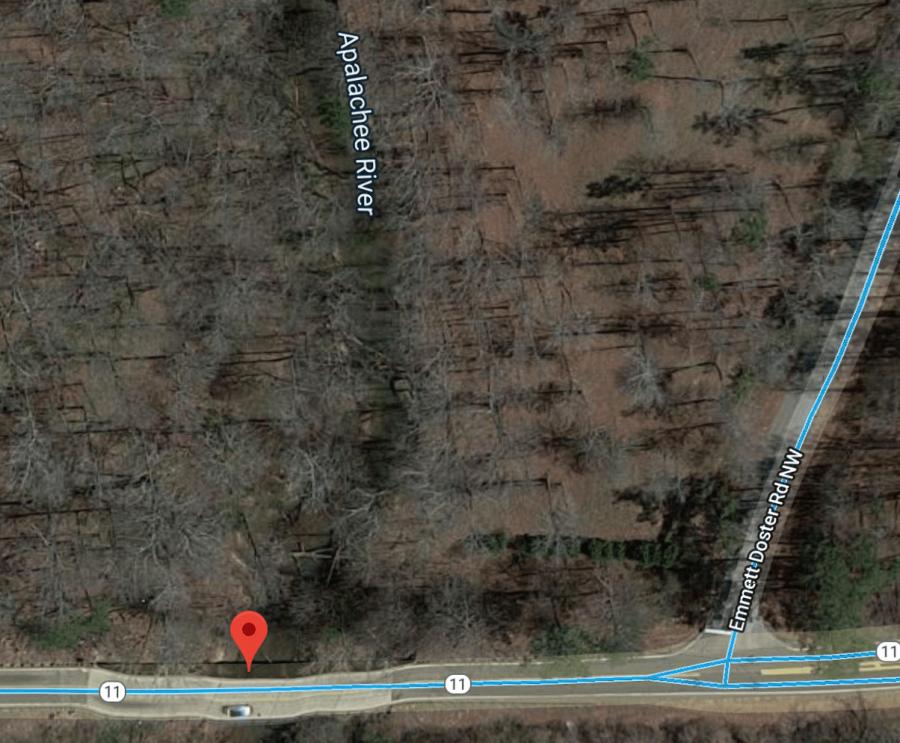 E.R. Snell has already constructed the new 240-ft. long, three span concrete bridge with one lane in each direction, 8-ft. wide shoulders on either side and half turning lanes on either end. The bridge does not have a bike path or pedestrian walkway.

Traffic was switched to the new bridge on Aug. 4. The first phase also included raising the elevation on Emmett Doster Road by about 15 ft. and some work on the new alignments. The second phase is demolishing the old bridge and road work for the new alignments.

The original concrete bridge — also three spans and one lane in each direction — had been constructed several decades ago.

The new bridge and adjacent road improvements were designed by Long Engineering. The existing bridge carried thousands of cars and trucks daily and did not have any shoulders. The new shoulders will help to improve safety on the structure.

The basic plan of attack for the bridge construction was to first build the caissons, then place the concrete beams and pour the deck. 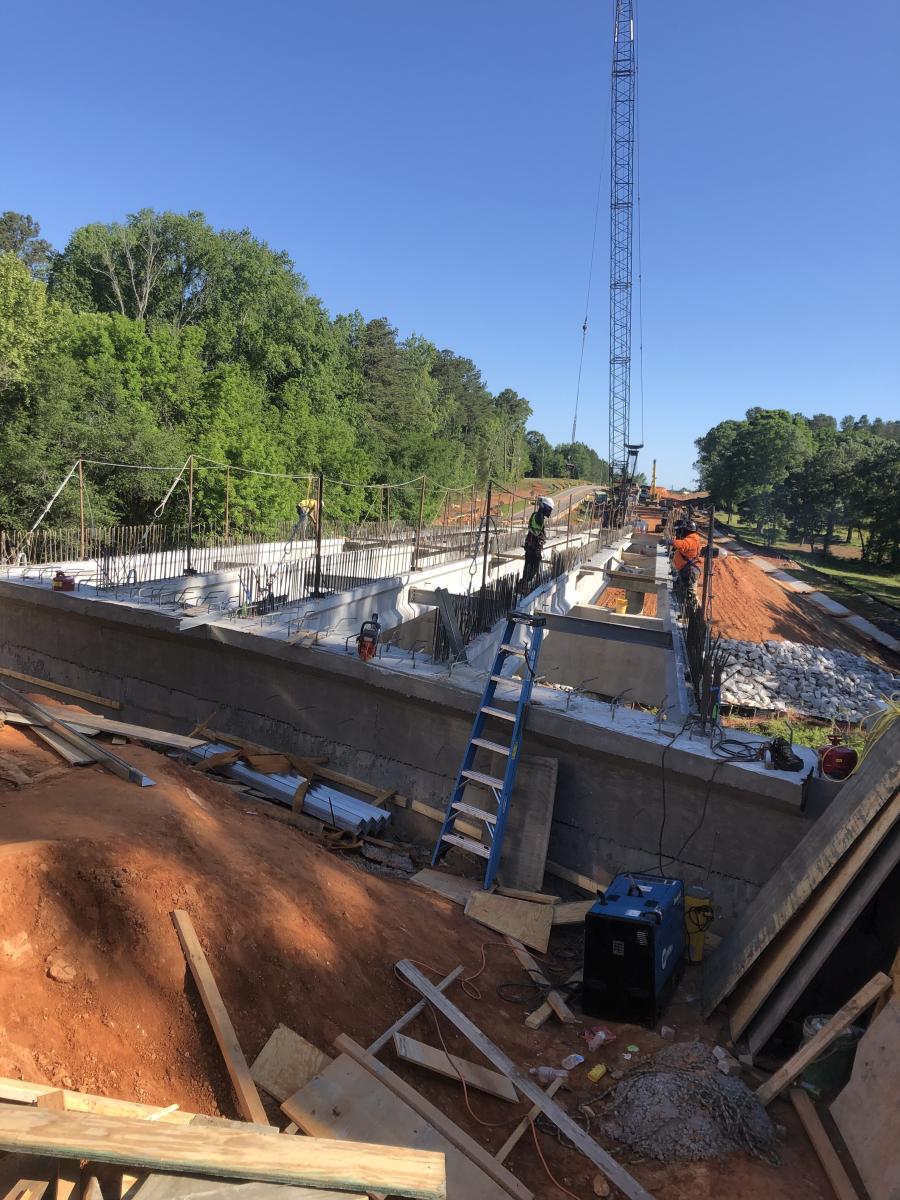 "We brought in about 40,000 yards of material," said Jordan Dunagan, E.R. Snell's vice president of construction/structures and project manager. "There will be no weight limit on this bridge. It's a lot more durable."

Winter and spring rains posed the greatest challenge to the construction process.

"We've come through a really, really rainy winter and spring, which was challenging because the job is located in a hole down by the river," said Dunagan. "We lost a couple of months of working days just for it being too wet to haul dirt. The rains had been rough on everybody. GDOT was very understanding of the situation, and we have a very good relationship with them."

There are no soil or utility issues impacting the bridge construction and demolition, and most of the work is being done in daylight hours.

The earth work resulted in 25,000 cu. yds. of borrow excavation and an overall total of 50,000 cu. yds. in excavation. New materials for the bridge construction include 110,000 lbs. of rebar, 700 cu. yds. of concrete, and 8,000 tons asphalt. Dunagan pointed out that the metal will be sent to a recycling center and the concrete will be used as fill.

"Most of everything will be used on-site," he said. "It's all per-specifications." 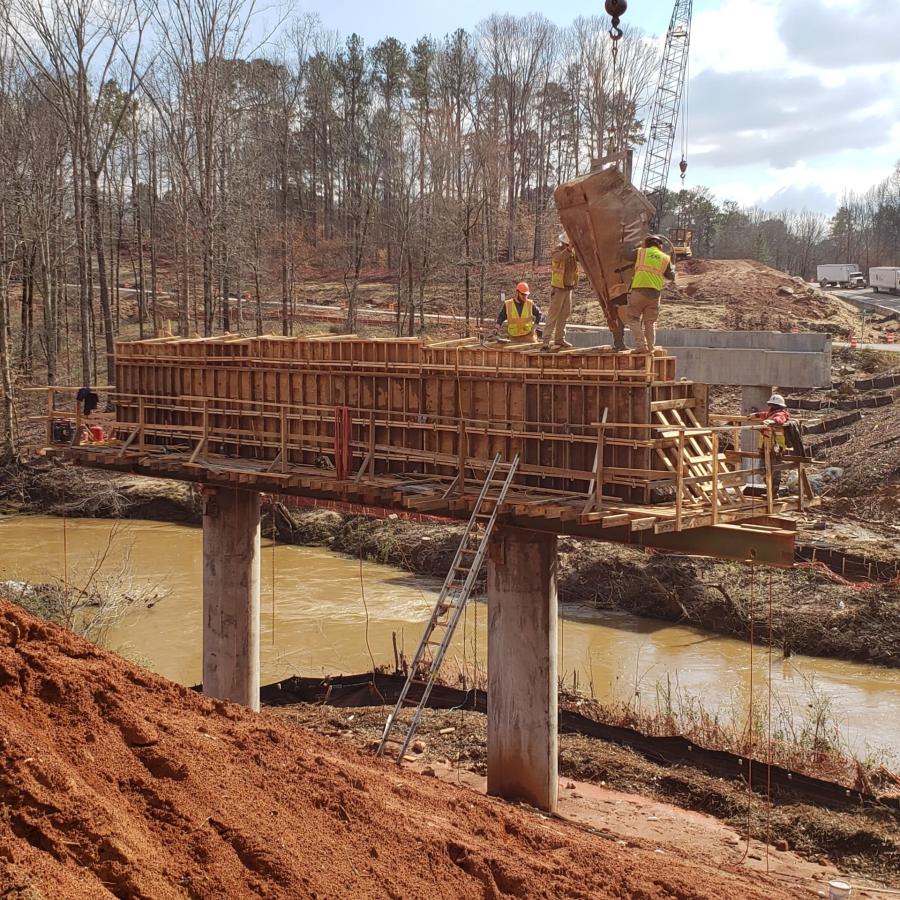 "We're fortunate in that we run very nice and new equipment," said Dunagan. "We didn't really experience a lot of break downs. We have a good fleet. A job this small doesn't justify a mechanic on-site all the time. We have mobile mechanics and if we need one, they can be here in within 30 minutes."

The work site is tight.

"A lot of closures out on the existing Highway 11 created main access points onto the job," said Dunagan.

Caisson construction began in December and was finished in January — this was necessary so that the intermediate bent could be installed, along with the middle span beams, and dirt placed for both bridge in-roads.

"The caissons were drilled with a D300 caisson drill rig," said Dunagan. "We don't allow anybody inside the shafts anymore. With cameras and other technologies, we don't have to go into them."

The caissons were drilled about 50 ft. below the riverbed. The shafts were filled with concrete and rebar.

The intermediate bents — two and three — were poured on top of the caissons. The beam setting was executed using a Link-Belt 218 110 ton crane and a Liebherr 300 ton crane.

The bridge demolition should take three to four weeks.

"We're keeping the river clean," said Dunagan. "We're sawing the deck and lifting out the pieces to ensure that nothing gets into the water." 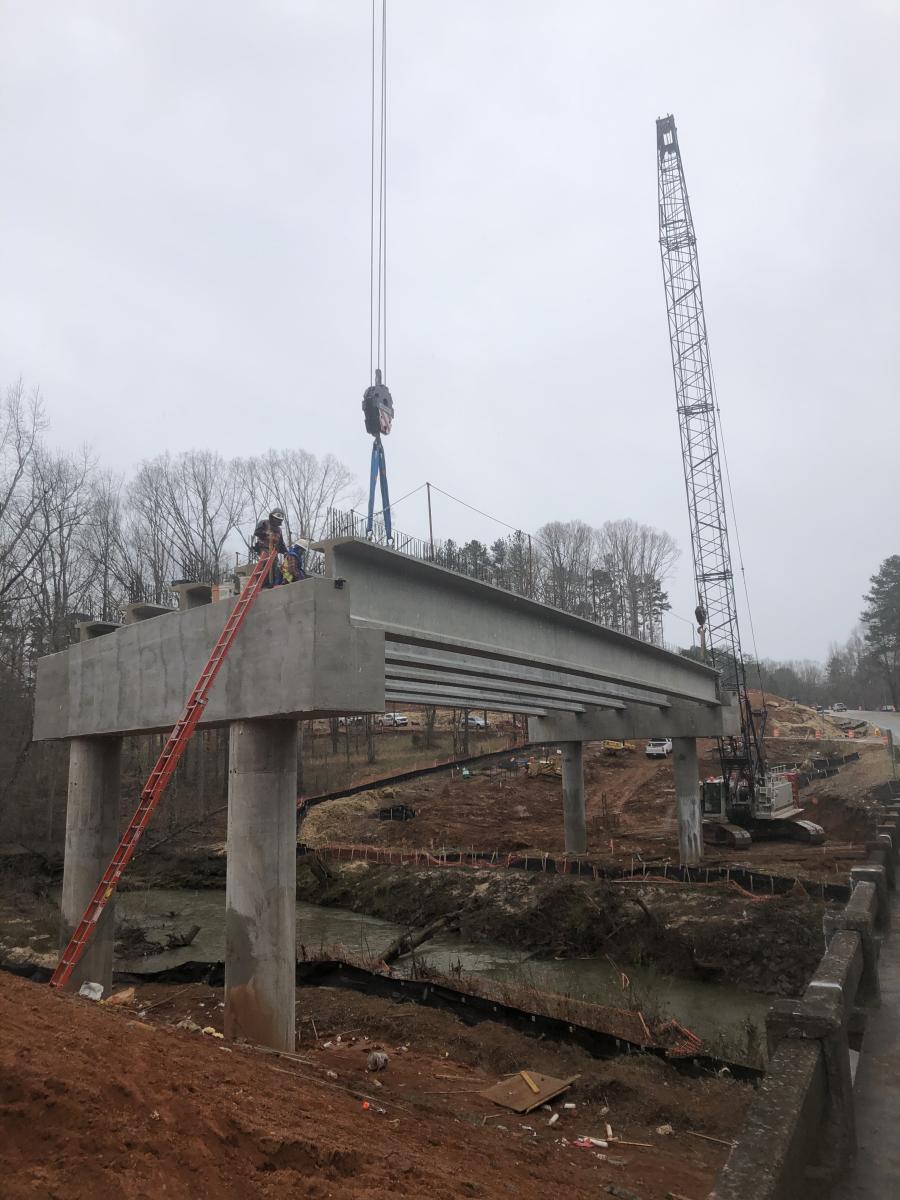 The demolition started on the northern side and is proceeding to the other end, allowing the crane and loaders to operate on the bridge as it is being removed.

"We don't see any challenges right now — it's a straight-forward course," said Dunagan, who has been managing projects for 15 years. "You're always learning on each project."

"For the new alignment, we'll place some new asphalt toping," said Dunagan. "We should be doing this around September 30. We'll have flaggers in place when we start the paving operation."

Dunagan is satisfied with the efforts of his management team and the crews.

"Everybody works great together," he said. "A lot of team work and planning goes into this. It's a great effort by all."

Peak days have 15 to 20 E.R. Snell and subcontractor personnel on-site, with the main subcontractors being Powell Drilling for the caissons; E.L. Jones Construction for concrete retaining walls; and Key Curving, which did all the flatwork, ditch paving, and driveways.

E.R.Snell makes it a point to send equipment to projects in good working order and with its substantial fleet, purchases equipment from dealerships representing the major manufacturers in the country.

The traffic management plan was primarily based on maintaining traffic on the existing bridge while building the new one close to it. Temporary lane closures have helped E.R. Snell do some road work and bring equipment and materials in and out of the job site.

With many DOTs ramping up work due to fewer vehicles on the roads, a GDOT press release stressed "Motorists are cautioned to reduce their speed while traveling through work zones, stay alert, and watch for workers," which is appreciated by E.R. Snell and other general contractors. For this and other projects, GDOT is asking travelers to secure real-time information on work status and traffic conditions by calling 511, visiting 511ga.org, or downloading the Georgia 511 app. CEG