The ongoing construction is in response to overcrowding concerns. 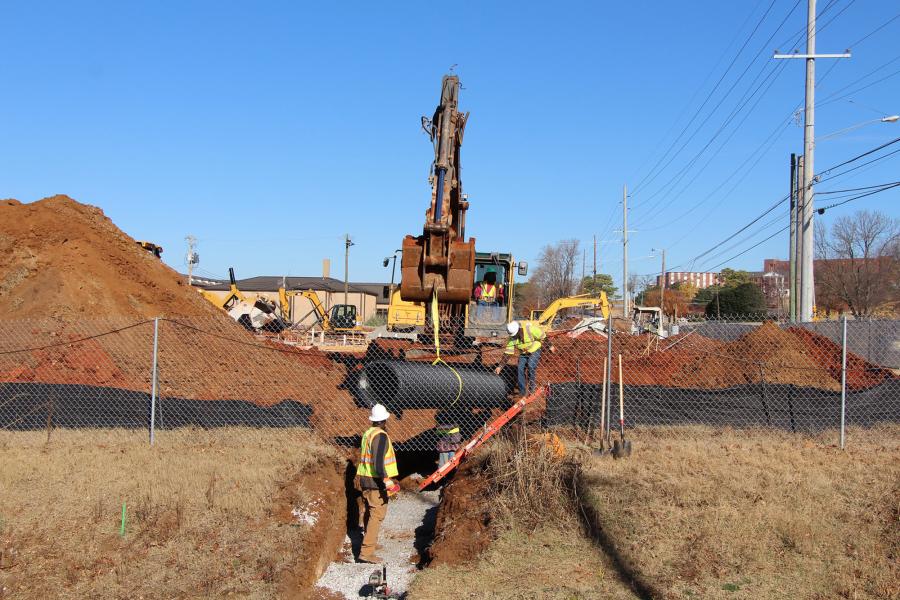 Alabama A&M photo A multi-million dollar residence hall that will serve students for decades to come is taking shape at Alabama A&M University in northern Huntsville.

A multi-million dollar residence hall that will serve students for decades to come is taking shape at Alabama A&M University in northern Huntsville. The ongoing construction is in response to overcrowding concerns.

“We have experienced tremendous growth in enrollment over the past five years,” said Dr. Gary Crosby, interim vice president for student affairs. “In fall of 2016, we welcomed over 1,600 first-year, first-time students to Alabama A&M University. As a result of record-breaking enrollment, there is more of a demand for housing.”

Crosby said work on the highly anticipated structure includes input from those who will reside in the new quarters.

“Our students are involved in the interior design process, so this is a very exciting time for them,” Crosby said. “They are looking forward to living and learning in a state-of-the-art facility.”

“Alabama A&M University is growing, and becoming the institution of choice as supported by our enrollment numbers. Now is a good time to build, because students are making choices as consumers. They are shopping for the best —including living facilities. A new residential facility allows the university to remain competitive with similar institutions,” said Hugine.

“It's very rewarding to see this project underway, as it is directly related to the university's 2015-2025 strategic plan, Into the Future. This project shows Alabama A&M University's commitment to providing students with the very best, from academics to facilities.”

Work is expected to be complete by mid to late November 2017. In August, 2016, Alabama A&M University broke ground on the new building, which will reportedly feature a complete building automation system that will monitor occupancy through motion censors, reducing the amount of energy used through HVAC in unoccupied rooms. There also will be lighting motion sensors in hallways and rooms for lights to dim when not in use.

According to Brian Shipp, the school's director of facilities and administrative services, the project is not without its share of difficulties.

“Schedule is a big challenge, because this space is critical to housing new students at the beginning of the next semester. Not making schedule requires space to be found for temporary housing.

“Schedule management and quality management are key to successful projects. Making sure deadlines are met and that work is done right the first time always impacts the success or failure of the job.”

Completing the building's storm shelter is another concern.

“This space is not used often, but when it is, you want it to be able to do its job,” said Shipp. “The materials and design that go into this space are critical to ensure it is built to last and survive possible weather events. It is also critical to the schedule, as it must be complete before work can go up with this wing of the building.

“Also, when constructing a housing space for campus life, durability is a must, because there is such a routine turnaround, at least yearly, that must take place. Making sure the materials installed can stand up to the challenge is always crucial during both the design and construction phase.”

“We felt this project as a new student living facility needed to produce an environment that was safe, comfortable and provided a conducive environment for learning,” said Brian Tibbs, AIA, of Moody Nolan's Nashville office. “We attempted to make sure that the building would provide a significant gateway into the university campus on Meridian Street, as well as reach the administration goals for housing approximately 600 students.”

“The biggest challenge, similar to many in our industry right now with rising construction costs, is designing a project that meets the owners' need — approximately 600 beds in this case, and maintaining the allotted budget. Careful consideration was used to making spaces more efficient to keep the project costs controlled.

“The intent was to design the building with the old Council Hall in mind — to design a new building with similar character of the historic campus. The building is four stories, and predominately brick and stone. Although a LEED certification is not the goal, sustainable features were utilized for energy efficiency and the selection of sustainable materials.”

Tibbs also said it was crucial that the structure's new classical design complement its surroundings.

“A campus is a collection of many buildings, so it's important for the building to have a relationship with materials style. We feel this building captures that, and its placement will begin signifying more of an entry into the campus and setting a standard for new developments to come.”

For members of the architectural team, the main focus was creating a comfortable space.

“We hope this will be forever known as the place to be on campus. We hope that our building will build community within the student body, and be a symbol for recruitment and retention of students. We also hope that this building will become the catalyst for future buildings and a leader for new developments,” said Tibbs.

The project incorporates the use of panelized wall systems for structural support. Install and sequencing of the work is considered essential.

Site work on the new residence hall began in early July, with the building package commencing in mid-October. Current tasks include concrete walls and slabs for the storm shelter, as well as slab preparation work on the south wing. Mechanical, electrical and plumbing rough-in work also is underway.

Demolition has already been completed. Concrete footings are approximately 50 percent finished, and a majority of the storm shelter walls have been placed. Plumbing, electrical and mechanical piping has been completed in various quadrants for below the slab. Key tasks yet to be carried out include equipment deliveries, which occur much later in the project, but are key in project success with getting spaces lighted and conditioned.

Shipp said the elements have not been a concern, to date.

“Weather has been a good factor up until this week, with the continuous dry conditions, Shipp said. “As we get into the rainy season, weather will play a role in what activities can take place.”

The new residence hall space served as a practice field and the location for some aging apartment homes.

“Preparing the site for the building pad started right away, with stripping of topsoil and balancing the site through excavation and put back of material,” said Shipp. “Site storm drainage installation is ongoing. Existing water service for the older apartment complex was replaced with a new meter to feed the new building. Power will be fed from the university's campus substation.”

Shipp said that for crews, dealing with students and traffic in the area is not easy.

Approximately 10,000 cu. yds. (7,645 cu m) of dirt was brought in to build up the site. There also were several loads of dirt that were shifted around the site to help balance it. Several pieces of equipment are currently in use, including excavators and skid steers. During concrete placements at the storm shelter, a concrete pump truck is used to get the concrete to its location.

Some of the main materials being used during construction include concrete, steel, structural and non-structural studs, block and brick and glazing.

Established in 1875, Alabama A&M is a public, historically black, land-grant university accredited by the Southern Association of Colleges and Schools, and is located in Normal, Ala. Alabama Agricultural and Mechanical University Historic District, also known as Normal Hill College Historic District, features numerous structures listed in the U.S. National Register of Historic Places. Offering academic programs that include engineering and education, the school's name includes the letters “A&M” as a nod to its roots in agriculture and mechanical programs. —CEG