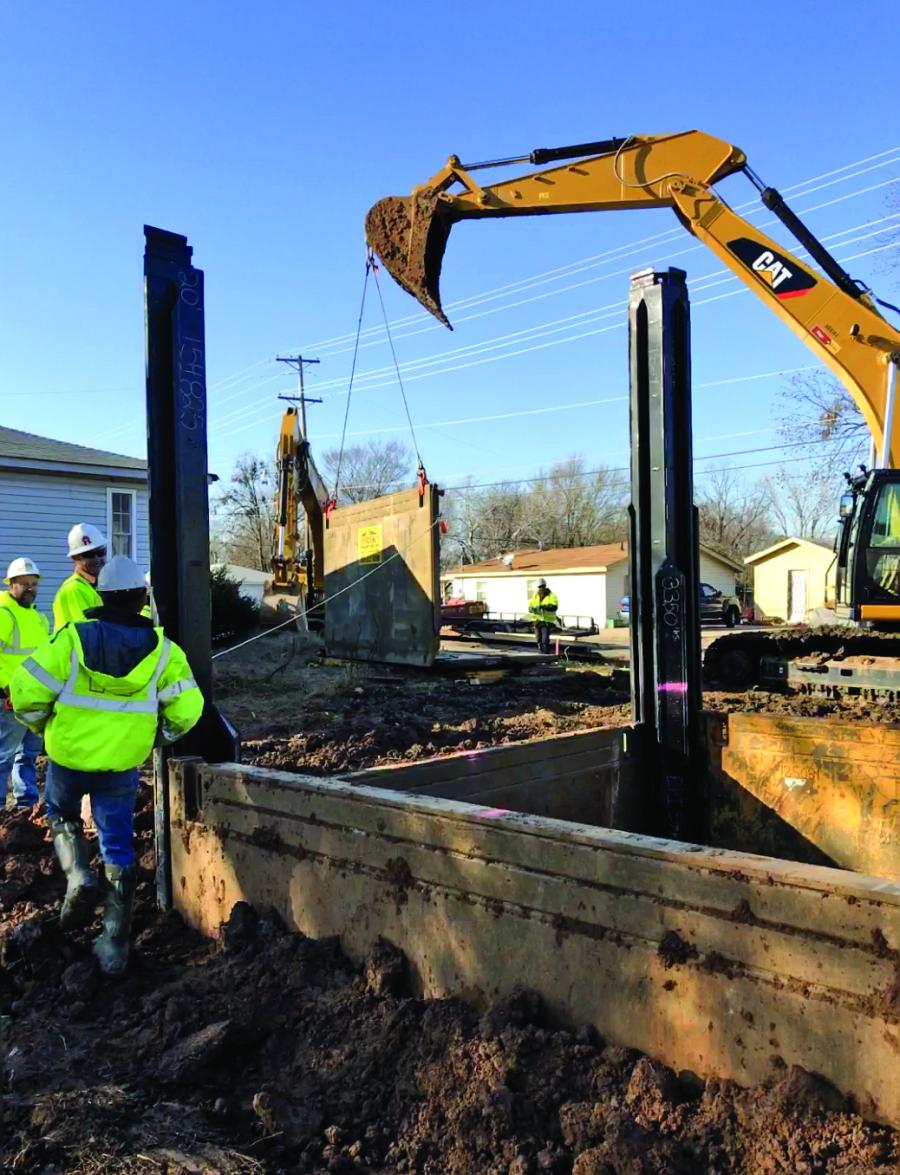 “We only had about a 25 ft. radius of space around where the wet-well was going to go, so we didn’t have any room for sloping or benching,” said RedStone’s Kurt Cosse. “Riggs happened to have a Slide Rail System that we needed and everything kind of fell into place.”

The installation of a pre-cast structure with sewer tie-in was really nothing new for RedStone. However, the depth of the excavation and its proximity to the Arkansas River presented a new wrinkle for the veteran underground utility crew. Plus, the excavation site was packed into a very small working area.

“We only had about a 25 foot radius of space around where the wet-well was going to go, so we didn't have any room for sloping or benching,” said Kurt Cosse, RedStone's project supervisor. “We knew we needed some type of non-traditional shoring system that would allow us to minimize the impact of the excavation area,” he said.

“RedStone came to us and we looked at their project parameters and saw that they had a really tight confined area that they were going to put the lift station in,” said Josh Clark, Riggs' rental operations coordinator. “So they asked us, what options do you have for shoring and we were able to show them an Efficiency Production slide rail system.”

“We've worked with Riggs pretty much since we've been in business, they've always been there for us,” said Cosse. “Just recently, Riggs has got into the trench safety rental business and they happened to have this shoring system that we needed and everything kind of fell into place from there. It's just a good match.”

“From the get-go, all the parts were right and what we needed,” Cosse said. “On previous jobs we've had problems with shoring material not being the correct one, or not showing up at all. But from day one when we got the slide rail system, everything came that was required to install it.”

“Dan was competent and knew exactly what he was doing,” said Cosse. “He had very good patience and was a very good teacher. By the end of just one day, our crew could install the slide rail system by themselves.”

“It was great working with both Riggs CAT and RedStone, three different companies coming together for a common objective,” Meredith said.

Clark said, “I observed how Dan worked with and handled the crew and I was very impressed with him. He interacted with RedStone's crew to make the slide rail go into the ground effectively and efficiently, but he also showed respect to those professionals that were there with Red Stone. It takes a special person to blend into a crew like that and Dan did that seamlessly,” Clark concluded.

Slide Rail is installed by sliding the steel panels into integrated rails on vertical posts and then pushing the panels and posts incrementally down to grade as the pit is dug.

“It took about a day to install the system which was half the time we thought it would take,” said Cosse. “I think that if we'd used another type of shoring or didn't have Dan on site, it could have taken twice as long.”

RedStone rented from Riggs the slide rail equipment to shore a 14 by 14 ft. excavation, 20 ft. deep. It installed the system with a Cat 330F and Cat 323F excavators, plus a Cat frontloader.

RedStone Construction Group has been serving Arkansas for more than 35 years, offering a wide range of services including excavation and earthwork, underground utilities, concrete and asphalt paving and repairs. For more information, visit www.redstone-cg.com.

James McRay is the director of marketing and media of Efficiency Production Inc. He can be reached at 800/552-8800; [email protected]