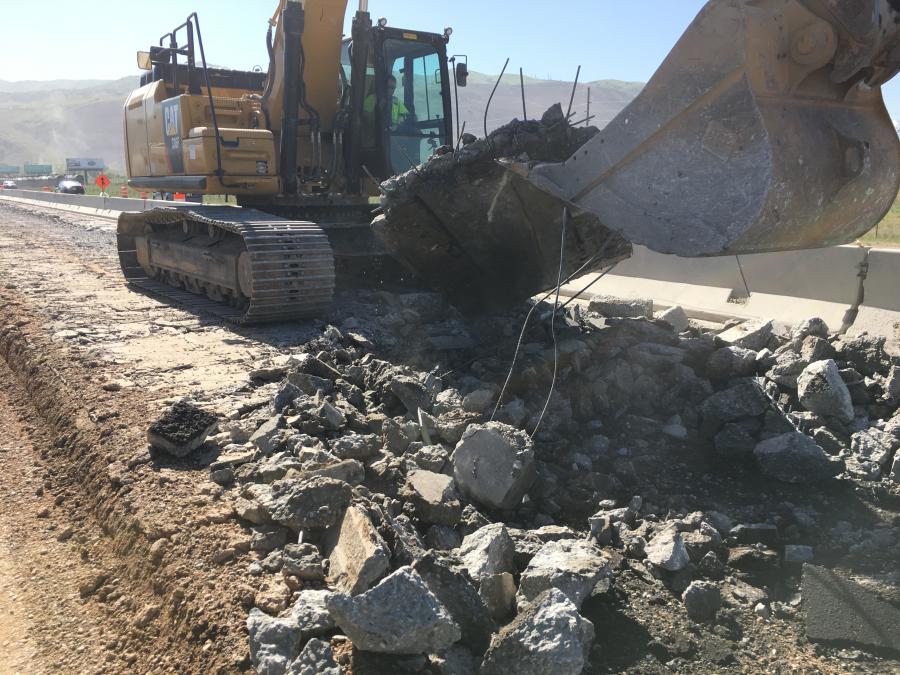 Reconstructing I-215 from the I-15 interchange in North Salt Lake to 2200 North has required a great deal of coordination. (UDOT photo)

Considered one of the top ten construction priorities for the Utah Department of Transportation (UDOT) in 2018, the I-215 Redwood Road project requires crews to build a new bridge east of the existing Redwood Road bridge over I-215. The ongoing work also includes converting the existing I-215 and Redwood Road interchange to a diverging diamond interchange.

"This change helps reduce congestion and backing that was happening nightly for northbound I-215," said UDOT project manager Brett Slater. "The project also removes and replaces the concrete pavement on I-215 from 2100 South to the I-15 connection to the north. The existing pavement had met its serviceable life, and was beginning to show excessive signs of wear. This new concrete will provide a new 30-year life to this section of I-215."

Construction involves reconstructing and adding an additional lane on Redwood Road from Center Street to I-215. A high percentage of commercial truck traffic uses this section of Redwood Road daily. The new roadway will help accommodate the increased traffic, pedestrians and bicyclists.

"The last part of this project is a roadway maintenance project along Redwood Road from Center Street in North Salt Lake to 500 South in Woods Cross," said Slater. "This maintenance project removed and replaced the top three inches of asphalt, giving a new ride and a longer life to this roadway." 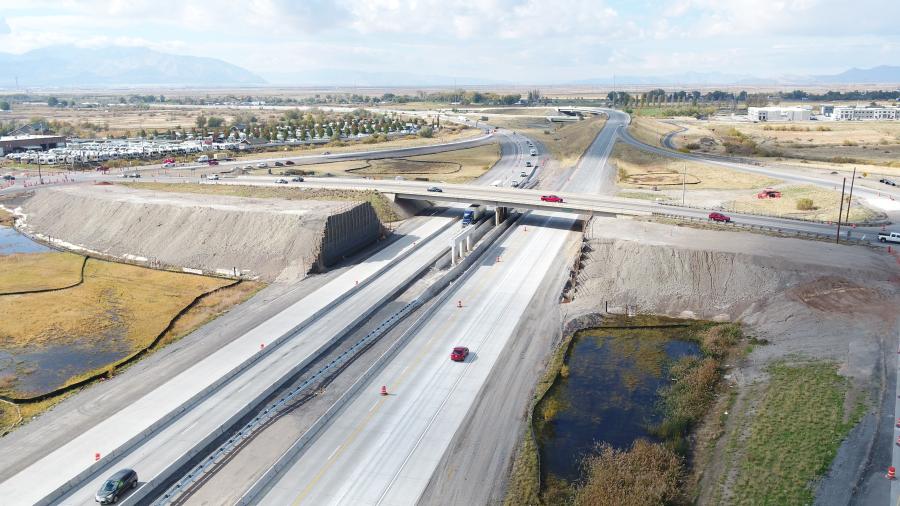 Construction involves reconstructing and adding an additional lane on Redwood Road from Center Street to I-215. (UDOT photo)

Redwood Road has an average daily traffic of 14,000 vehicles, with 22 percent truck traffic. I-215 has an average daily traffic of 36,000 with 19 percent truck traffic. With the number of motorists using this stretch continually growing, the congestion and delays will only get worse if changes are not made. Slater said the ongoing effort is worth the temporary inconveniences.

"Like any project reconstructing a roadway, congestion will occur. UDOT, along with the contractor, have tried to limit those impacts while trying to get this project built. We were able to maintain the existing number of lanes on I-215 during peak hours every day, with just a few exceptions. This minimized the impacts to the I-215 traffic.

"The reconstruction of Redwood Road was a little bit more challenging. With major utility relocation, canal crossings and a new storm drain system, traffic was reduced to one lane in each direction. Business access was maintained, and a strong public involvement program was in place to keep motorists and business informed about the project. By keeping the public informed, we did not receive a lot of feedback or complaints while construction was taking place.

Several design options were evaluated, but at this location, a diverging diamond interchange met the traffic needs today and into the foreseeable future, according to Slater. 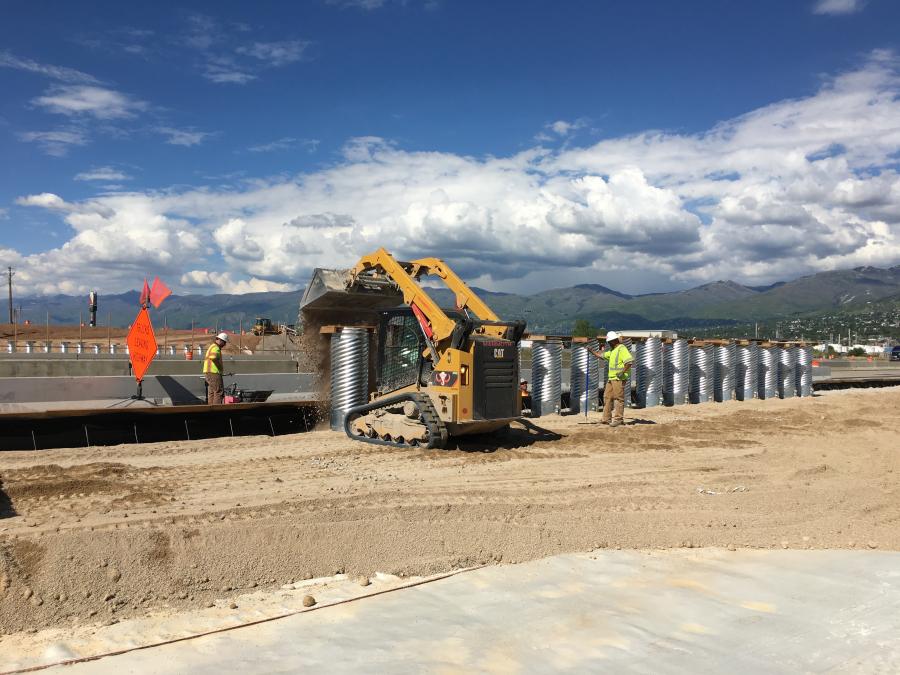 Considered one of the top ten construction priorities for the Utah Department of Transportation (UDOT) in 2018, the I-215 Redwood Road project requires crews to build a new bridge east of the existing Redwood Road bridge over I-215. (UDOT photo)

The majority of the work will be completed within the next few months, but due to settlement issues, the surcharge material will not be removed for another month, forcing the new bridge to be built in 2019.

"This was a fast-paced project, with the contractor working around the clock during a lot of the construction, in order to minimize impacts to the traveling public."

One of the biggest challenges is soil settlement for the new bridge structure. Geotechnical issues create an unknown time component in a project that makes it hard to schedule the work.

"On this project utilities and storm drain have been a challenge, as this area has an extremely high water table, which slows us down, forces extra work and tough working conditions. Another challenge for us is the large volume of traffic. We need to keep a certain number of lanes open during peak hours. This has been a challenge to minimize impacts to commuters and businesses, while still getting the work done."

Reconstructing I-215 from the I-15 interchange in North Salt Lake to 2200 North has required a great deal of coordination.

"To reconstruct a concrete freeway, we need to close the lanes being redone for a long period of time," said Slater. "Temporary widening is first required, in order to move traffic out of the lanes under construction. Once this traffic control is in place, removal and replacement operations can begin.

"The old concrete is broken up and removed, and the underlying pavement section is replaced and then new concrete is placed. It then takes typically two to three weeks for the concrete to cure before it can be sealed and traffic placed on it." 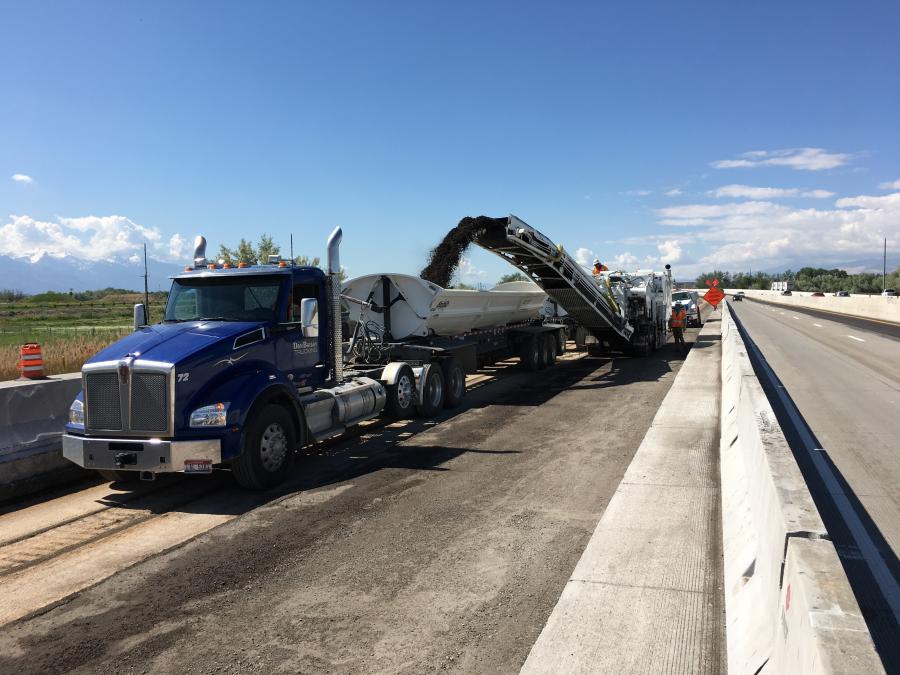 The ongoing work includes converting the existing I-215 and Redwood Road interchange to a diverging diamond interchange. (UDOT photo)

Currently, crews are working on the I-215 section between Redwood Road and I-15, also while widening Redwood Road from I-215 to Center Street in North Salt Lake City.

"We have completed the milling and overlay of Redwood Road from Center Street to 500 South and the I-215 work south of the Legacy Interchange. We have completed the surcharge activities for the new bridge, which allow the settlement to occur at the fastest pace possible."

With winter in full swing, concrete work needs to be covered to prevent freezing, and asphalt work cannot start until temperatures are at 50 degrees.

Slater said the condition of the property before work began was less than ideal.

"The pavement on I-215 had a lot of potholes, cracks and substandard smoothness. This is why UDOT decided to replace these sections. Redwood Road carries a lot of traffic, and needed to be widened from I-215 to Center Street. The condition of the asphalt from Center Street to 500 South was deteriorating, necessitating that three inches be milled off and a new riding surface placed for longevity of the roadway.

"All clearing and grubbing, which is only done in areas where we widen the roadway, has been completed. Soon, we will stabilize all of these areas outside our construction with a seed mix and mulch to prevent erosion. Those slopes will look much better then." 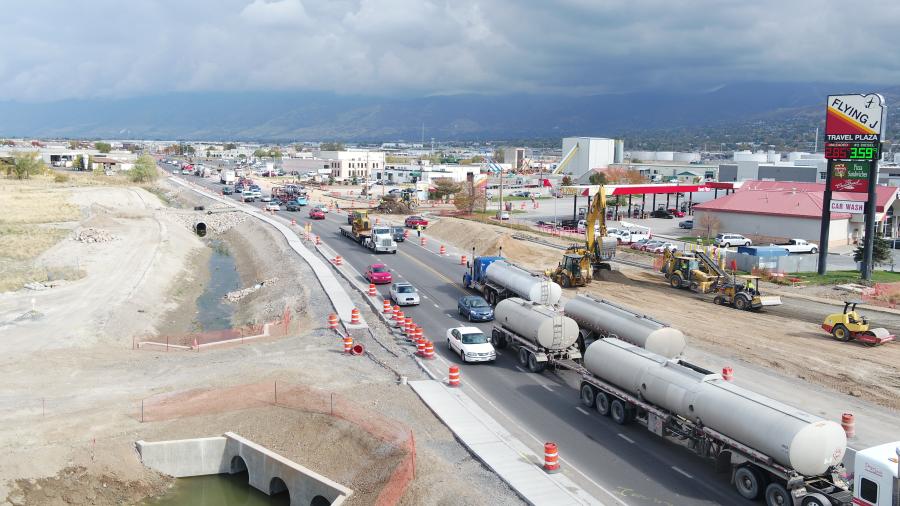 A total of 115,000 cu. yds. of material will be moved on the project, including the various types of material needed to construct the roadways. (UDOT photo)

This area of the Salt Lake Valley has a high water table that has made excavation difficult while installing the project storm drain system. A lot of dewatering has been needed in order to construct the system, especially with the two canals that needed work done.

A total of 115,000 cu. yds. of material will be moved on the project, including the various types of material needed to construct the roadways. An estimated 77,000 sq. yds. of concrete also will have been placed, along with 50,000 tons of asphalt.

Main equipment being used on the project includes trackhoes, graders, paving machines, dump trucks and rollers. Various types of soil, asphalt and concrete also are required to complete the work.

"This project has a lot of work involved in the different sections. For I-215, the time-consuming part is waiting for the concrete to cure. For the bridge structure, it's waiting for the settlement to take place."

Slater added, "We have had a great working relationship with North Salt Lake City during this project. They have been great partners."