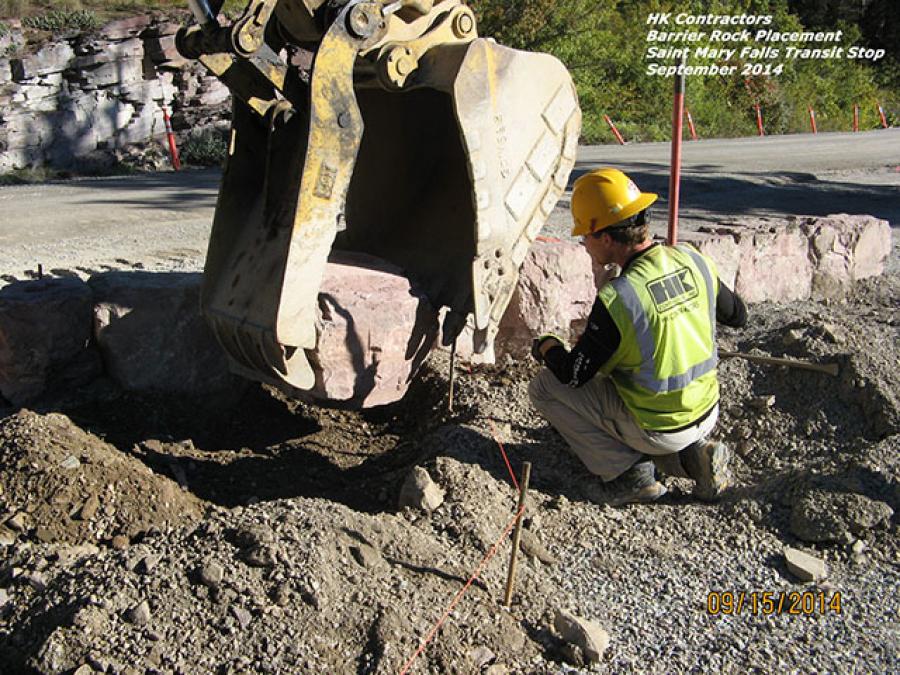 Federal Highway Administration photo One of the challenges with the stone work was the replacement stone had to match the existing stone that was used when the road was first built.

The 50-mi. (80.5 km) road that bisects Glacier National Park in Montana, has the unique designation of being both a National Historic Landmark and a National Civil Engineering Landmark. What these designations mean is that any construction requires extensive measures to protect and maintain its historic nature.

“You can't just tear into stuff and change things when you get this type of national significance by the Park Service,” explained Jack Gordon, the landscape architect for Glacier National Park. Gordon was involved with the Environmental Impact Statement (EIS) prior to the project's start and has overseen the construction for the National Park Service.

A part of the EIS, a number of studies reviewed the socio-economic impacts, the engineering feasibility, the cultural landscape, and economics of the rehabilitation project, and the entire project was overseen by an Advisory Committee that was authorized by the Secretary of Interior.

The rehabilitation for GTSR was long overdue, Gordon said. “Given the nature of where the road is, given avalanches, given rock fall, given that we have to snowplow it in the spring, the road just takes quite a beating. Before this rehab started, there were quite a few areas of traffic controlled candles, jersey barrier on the roadside where guard walls had been knocked down, stone masonry facing on concrete walls that was never been completed prior to the rehab. The road kind of looked like hell.”

For this reason, when the National Park Service and Federal Highway Administration partnered to tackle the project, they considered it a rehabilitation of the entire road.

“It wasn't just retaining walls and guard walls,” Gordon explained. “It was the whole prism of the road was looked at.”

These two agencies also partnered to build the original GTSR, signing a memorandum of agreement that later expanded to all NPS roads in 1926, and Gordon remarked that “it's pretty cool this partnership is still going on.”

When it came time to select the scenarios under which the rehabilitation would occur, there were two schools of thought: closing the road entirely to vehicles or keeping it open, resulting in higher construction costs and a longer project. Gordon said the former option was not viable, especially since Glacier National Park receives over 2 million visitors a year.

“I think early on there was some questioning of why don't we just close it and 'Get'r done,' but given the cost associated with keeping this road open to the regional economy, it was pretty hard for anyone to stomach and that's why we ended up with alternative we did,” he said.

The final accepted construction portion of the project would span 10 years with a price tag of $140 million. The Columbia Falls office of HK Contractors was awarded the contract.

“The fact it was a 10-year project, besides the longevity and the fact that it was in a national park and with the Federal Highway Administration, it interested the group that I work within HK that specifically targets federal projects,” said Don Herne, project manager for the GTSR project since its start.

A large portion of the work was road stabilization, which required new culverts, resurfacing drainage, and new cross drains to control the water, but Herne said that it was “nothing too out of the ordinary.” Work they subcontracted out included the masonry work, building mechanically stabilized earth walls, traffic control, and rock fall mitigation.

The project specifications divided the 50-mi. road into 10 segments, and Herne said the work sequence for each phase was nearly the same each time.

“We come in and we do all the subgrade stabilization, all the drainage, and underground drainage. Then as we got up the sides, we do the masonry and the cosmetics,” he said.

To emphasize the importance of maintaining the historic nature of the roadway, HK Contractors implemented a quality control program for its crew. “We made sure our crews understood the specifications, all the way down to the guy working the shovel,” Herne explained. “[They] understood the quality control specifications of our project so that way we could maintain the integrity of all the historical markers and things of that nature.”

Maintaining the historic integrity of the 22-ft.-wide (6.7 m) road proved to be one of the challenges, and in the end there were only two places where the road was altered for safety purposes. In the alpine section, a stone face was cut into to allow for traffic flow during the construction, and they also realigned a portion of the road near a scenic turnout so visitors wouldn't have to cross the road.

In addition to the road stabilization, there was extensive stone masonry work, which had its own challenges.

“The stone had to match the indigenous stone that was used on the road when the road was first built, so we went through a long tedious learning curve with this stone production and finding the right stone,” Gordon said.

Herne said that it was a challenge finding enough rock to match the buckskin Helena formation limestone used in the original masonry, and the nearest source found was on Plum Creek Property 60 mi. (96.56 km) away. Although the masons were able to salvage some of the existing rock, they trucked in 4,000 to 5000 tons (3628.7 to 4535.9 t) of rock; some was stockpiled for later use. Another challenge was matching the existing grout color, and he said that after a few trials, they finally figured out the formula.

Guinette out of Vancouver Wash., and Anderson Masonry out of Bigfork Mont., were the primary contractors, and of their work, Gordon said, “They've just done a stellar job.”

For Herne, he said that the historic nature was “a good challenge” and on this project, it was the masonry work that proved challenging instead of the landscaping, which was the case on previous National Park Service projects. That being said, “the traffic control logistics of the public traffic were probably one of the largest headache,” he admitted.

Although 30-minute traffic delays were permitted, Herne said that during the months of high traffic flow, June through August, crews actually only had 15 minutes of production time in the alpine section to move equipment. Yet what surprised Gordon was how few complaints they received regarding the traffic delays. He attributed this to visitors being able to get out of their cars and take in the view, something they otherwise couldn't have done had the road remained open.

At the project's peak from 2009 to 2012, there were nearly 200 employees “crawling on the mountain,” and we were working on two to three phases at a time, Herne said. In spite of the traffic impacts, they were either ahead or on schedule for every section of the road.

Crews are currently finishing the east entrance station and the quarter-mile long road before moving onto the final phase of the project, which is along Lake McDonald.

Before beginning the project, Herne said they looked at the original construction plans to see how they built the road during the 1930s.