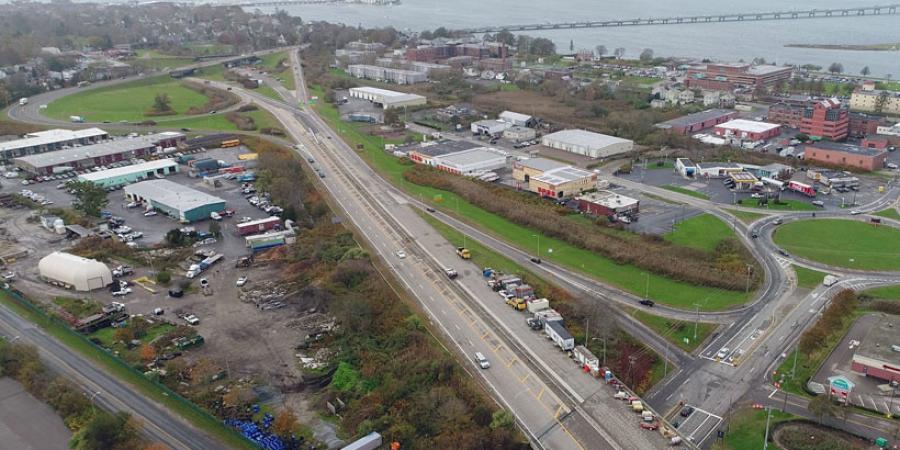 Federal, state and local officials gathered July 16 on the long Claiborne Pell Bridge off-ramp in Newport, R.I., for the groundbreaking of work to reconfigure the structure's approaches, the second phase of a total $84.9 million project that began in 2020.

Last year's $10.9 million initial phase of work saw crews begin the reconstruction of JT Connell and Coddington highways, from Admiral Kalbfus Road to West Main Road in Middletown, as well as the installation of a separate bike and pedestrian lane. The Rhode Island Department of Transportation (RIDOT) expects Phase 1 to be completed by the end of this year.

The newest phase, at a projected cost of $74 million, is due to be finished by late 2024, the Newport Daily News reported.

"This project is a big win on many fronts," said Rhode Island Gov. Dan McKee at the ceremony. "It will solve chronic safety and congestion issues, provide a unique opportunity for economic growth, and create an attractive gateway into Newport."

Many Pieces to the Project

The Cumberland, R.I., contractor, J.H. Lynch & Sons, began building the ramp reconfiguration in June by digging up the rotary at JT Connell and Admiral Kalbfus, which will be converted to a roundabout with a narrowed travel lane that will lower speeds and feature pedestrian crossings on all approaches.

RIDOT believes the contemporary design will reduce crashes by nearly two-thirds, according to the Daily News.

Secondary bridges over Third Street, the railroad tracks and JT Connell Highway will all be upgraded this year, said Jody Richards, the project manager of RIDOT. He added, in remarks to the Daily News, that work also will begin on the shared-use bike path that will run parallel to the tracks all the way to Newport's Gateway Center.

In the next few years of construction, crews will eliminate the extended off-ramp that currently heads over Admiral Kalbfus Road before curving around to land across from the former Newport Grand site on the north side of the road. Locals call this lengthy aerial viaduct ramp "the road to nowhere" because it was originally designed in the 1960s for a relocated RI Route 138 project that never came to fruition, according to the Daily News.

The new plan calls for construction of a single ramp that will curve down to the south side of Admiral Kalbfus Road and will allow motorists, cyclers and pedestrians to come on and off the Pell Bridge. A movable barrier also will be built down the middle of the ramp separating eastbound and westbound traffic.

RIDOT is planning to remove the existing "Downtown Newport" exit from the Pell Bridge to reduce an estimated 80 percent of rear-end and sideswipe crashes, according to agency estimates. The new ramp will have an exit that takes motorists to a spot further north on JT Connell Highway.

As part of the upgrade to the bridge's approaches, JT Connell will be extended from the rotary at Admiral Kalbfus Road straight through to Farewell Street, giving residents of the North End of Newport a simple connection to the rest of the city.

The project also is designed to install a traffic signal at the intersection of Malbone Road and Girard Avenue, along with pedestrian crossing features and other improvements. These changes are expected to reduce up to 75 percent of crashes at the crossing, according to RIDOT.

"We've waited a long time for this day," she told those in attendance at the July 16 groundbreaking. "Since that time, numerous City Councils, mayors and city managers have helped push this project forward little by little."

The Daily News reported that Napolitano and other speakers credited Rhode Island's U.S. Sen. Jack Reed, a member of the Senate Appropriations Committee; his colleague, U.S. Sen. Sheldon Whitehouse, a member of the Environmental Public Works Committee; and U.S. Rep. David Cicilline, for securing a $20 million federal grant in 2019 that helped kick-start the project.

"The Pell Bridge is the gateway to Aquidneck Island," Reed said. "Whether you are traveling to Newport attractions or [Naval Station Newport], this project will make your trip safer and faster."

Whitehouse added, "My hope is that the construction of new ramps will be just the first step in upgrading the iconic Pell Bridge," while, in his remarks, Cicilline noted, "This project is so significant because it has been a priority for Newport for years and years."

The Daily News reported that RIDOT's reconfiguration of the area also is expected to free up about 25 acres for economic development.

"While in some ways this may mark the culmination of a decades-long effort, as a city, it's also just the beginning as we look to revitalize and reconnect Newport's North End," Napolitano said. "Newport has re-imagined itself many times over its history, and we look forward to what the 21st century brings."