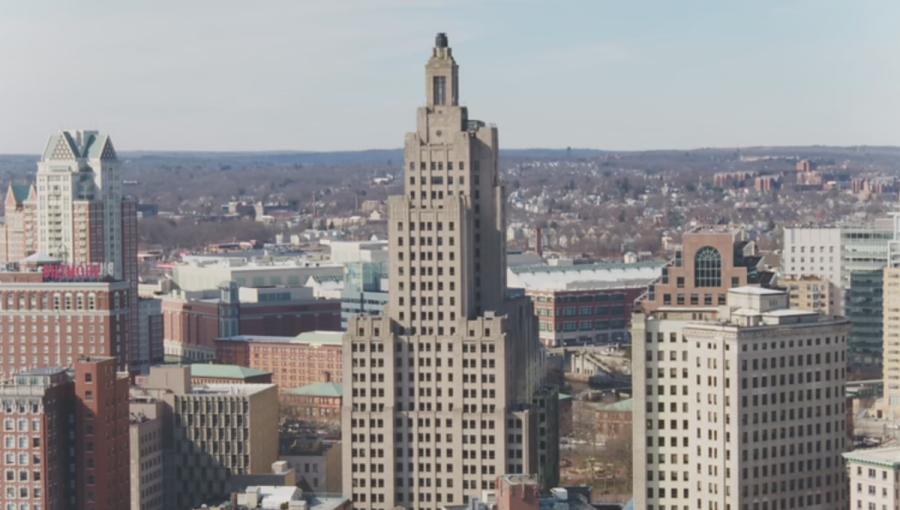 Locally, the 95-year-old Art Deco structure is commonly referred to as the "Superman Building” because of its visual similarity to the headquarters of the Daily Planet newspaper in the superhero’s comic books and shown on “The Adventures of Superman” TV series from the 1950s.

A complex financing plan was unveiled by Rhode Island Gov. Dan McKee and other state leaders on April 12 to redevelop the long-vacant "Superman" building in downtown Providence, arguing that a mix of public and private funding can revive the iconic skyscraper to its former glory.

The proposal for transforming the 26-story Art Deco office tower into a mixed-use building with 285 apartments as well as office, retail and event space, is intended to revive the skyscraper for a second century atop the city skyline.

Locally, the 95-year-old Art Deco structure is commonly referred to as the "Superman Building" because of its visual similarity to the headquarters of the Daily Planet newspaper in the superhero's comic books and shown on "The Adventures of Superman" TV series from the 1950s.

WPRI 12 News in Providence reported that the total cost of the renovation project is estimated at more than $220 million.

At a State House news conference, Rhode Island Commerce Secretary Stefan Pryor said $26.2 million of the project's budget will come from the state; $15 million from the city of Providence; up to $24.1 million will come from federal tax credits; and the rest will be financed by building owner High Rock Development, a Newton, Mass., LLC, through a mix of cash, debt and equity.

Due to the timing of when High Rock will receive its Rebuild Rhode Island tax credits from the state, the Rhode Island Foundation has agreed to extend a loan to the developer to lower the financing costs for the project, backed by the tax credits.

"As Rhode Island continues to lead the region in our economic recovery, this project will help to maintain that momentum by reinvigorating downtown Providence, creating good-paying construction jobs, increasing our state's market-rate and affordable housing supply, and generating further opportunities for the residents and businesses of our capital city," McKee said in a statement.

Located at 111 Westminster St., Rhode Island's tallest building began its life as the Industrial Trust building, named for the bank that built it in the 1920s. In 1982, the bank changed its name to Fleet, before it was later acquired by Bank of America.

High Rock bought the building in 2008 for $33.2 million, but just five years later it was left empty and decaying when Bank of America moved out. Multiple proposals to redevelop it have foundered since then, according to WPRI 12 News.

At the same time, the building's assessed value dropped from $31.3 million in 2009 to just $14.2 million as of last year, according to Providence city records.

With a substantial plan and a new influx of cash, though, Pryor argued the building's makeover could be transformative for Providence.

"Most of the images of our capital city's skyline involve this building," he told 12 News. "It's a gorgeous, although dormant, feature of the skyline. This set of investments will breathe new life into this iconic tower. It will also bring hundreds of new residents to our capital city's downtown."

He added, "[The renovation] will produce hundreds of construction jobs, and it will send a signal that our capital city and ... our state are on the upswing."

Still, Pryor acknowledged it had taken six months to produce the new plan, and that the framework needs several approvals before it can move forward. He also suggested the state had driven a hard bargain with High Rock, reducing its original state subsidy request of $48.3 million by nearly half, and doubling the number of affordable apartment units.

"Until it's voted upon, it's not enacted," he cautioned. "Having said that, the key executives from each of these boards, commissions and councils have been involved with this process, so we believe that these commitments will be fulfilled."

WPRI 12 News reported the $220 million project cost will be used to turn the Superman building into a mainly residential structure, with 285 apartments taking up most of its 350,000 sq. ft. The tower's elegant 26,000-sq.-ft. banking hall is to become a space for retailers, events, and community use. Another 8,000 sq. ft. would be set up for commercial office space.

The rest would be market-rate units.

According to Pryor, other pledges made by High Rock include using a project labor agreement to ensure union workers work on the restoration, which he said would create more than 1,500 construction jobs, and making "a best-effort commitment" to give 20 percent of subcontracts to women- and minority-owned businesses. High Rock will also seek LEED certification for environmental friendliness.