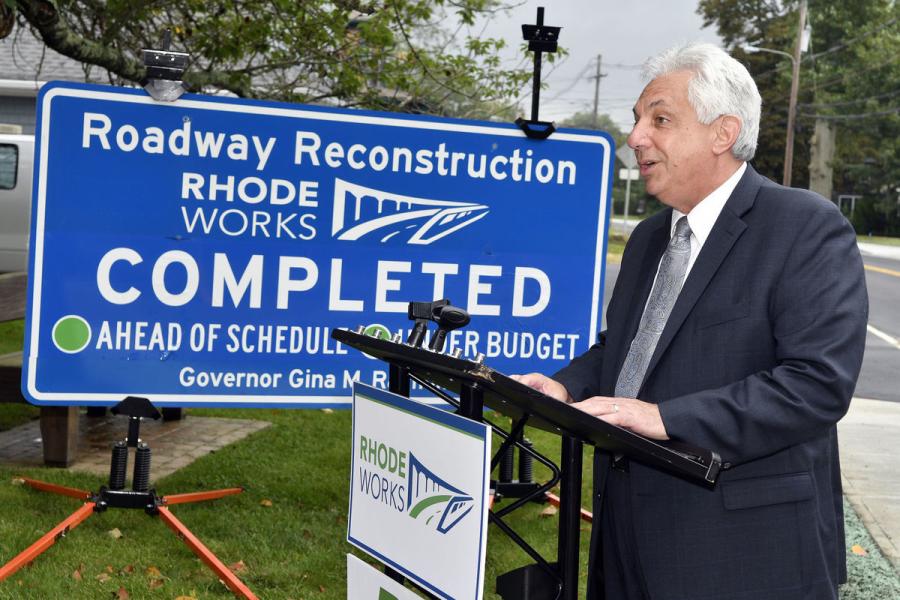 Department of Transportation Director Peter Alviti Jr. during a ribbon-cutting ceremony for the completion of the High Street and Kingstown Road improvement project. (Michael Derr photo)

The Rhode Island Department of Transportation (RIDOT) joined with state and local officials to celebrate the early completion of the High Street and Kingstown Road Improvements project in South Kingstown. The much-needed repair for 1.3 mi. of roadway in the villages of Wakefield and Peace Dale finished in August, approximately two months ahead of schedule and about $300,000 under budget.

“I'd like to congratulate our project management team for their diligent work that allowed us to finish this work early while staying on budget,” said Peter Alviti Jr., RIDOT director. “And thanks to the funding provided by the RhodeWorks program, we can check two more roads off the list of bad roads in Rhode Island.”

These two roads had historic street flooding problems, which contributed to deteriorated pavement conditions. The driving surface had gotten so poor that following the severe winter of 2015, RIDOT had to invest $81,500 to patch large sections of pothole-ridden roadway to keep it passable until this project could begin.

“The town of South Kingstown is truly appreciative of the state's efforts in bringing the High Street and Kingstown Road Improvements project to fruition,” said Stephen A. Alfred, South Kingstown town manager. “These critical arterial/collector roads have suffered poor pavement and drainage conditions for many years. We applaud RIDOT's entire project team that, under the leadership of Director Alviti, worked tirelessly in seeing that these much-needed improvements were completed, all for the betterment of the entire community — residents, businesses and visitors alike.”

In addition to drainage improvements, the $6.5 million project focused on pavement replacement; Americans with Disabilities Act (ADA)-compliant sidewalk installation; and the addition of new signing and striping. Work also included the installation of school zone flashing signs to call more attention to the school zone for passing motorists during normal school hours at the Wakefield Elementary School.

This fall, RIDOT expects to wrap up work on an additional project design to minimize the impact of stormwater runoff from these roads into the nearby Saugatucket River. This $715,000 project involves the installation of three stormwater treatment areas in the Saugatucket River watershed, and is on budget and on schedule, set to finish in November. These improvements will result in a net improvement in water quality around the river, which flows through the heart of South Kingstown and into Point Judith Pond.