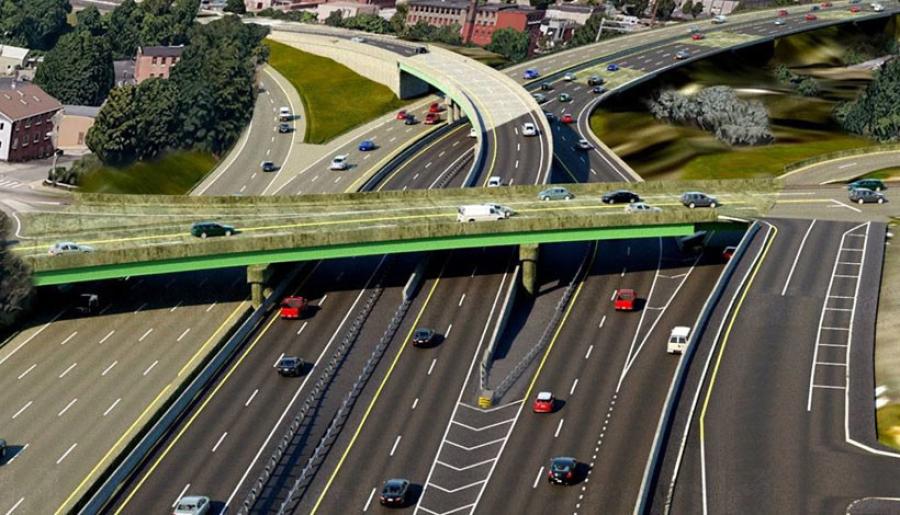 It's safe to say that if you've ever driven on Interstate 95 northbound in Providence, R.I., near the mall, you've put your life in other people's steering-wheel-gripping hands. This area, known as the Providence Viaduct, had more than 1,000 vehicle crashes between 2009 and 2014 and can back up for several miles during rush hour.

"This corridor has easily become the most congested section of highway in the state," Anthony Pompei, a project manager of the Rhode Island Department of Transportation (RIDOT), said during a Dec. 10 online presentation.

"The existing Providence viaduct was originally constructed back in the '60s to carry I-95 through downtown Providence and was [built] to carry less than 60,000 vehicles per day. This corridor now processes nearly four times that amount, making it the third-most traveled interstate in all of New England."

The I-95 south-side section of the viaduct was revamped in 2017, but the northbound section — which includes ramps to and from downtown, an exit to Rhode Island state offices, and connections to Route 146 and the 6/10 Connector — has suffered not only from traffic backlogs and accidents but also crumbling infrastructure.

"Carrying significantly more traffic than it was initially designed for has also led to the accelerated deterioration of the bridge structures," Pompei said. "Due to these structural deficiencies, RIDOT has conducted bimonthly bridge inspections of the viaduct and performed several emergency repairs."

With the situation growing more dire, RIDOT has secured a $60.3 million federal Infrastructure for Rebuilding America (INFRA) grant as part of a larger pool of funds to revamp this outdated section of interstate. The preliminary designs were showcased at a recent virtual meeting.

One featured improvement includes a connector-distributor road on the northbound side near Providence Place, which will be separated from the other lanes by a barrier. RIDOT said this will reduce traffic and accidents where the ramps from downtown and the 6/10 Connector merge onto I-95 North, and where cars scoot across lanes to jump on Route 146, exit at the state offices, or continue northward to Pawtucket and beyond.

"Adding that new connector-distributor roadway allows for a more efficient set of connections from Atwells [Avenue] and the ramps and reduces [problematic] weaving," said Matthew D'Angelo, a design manager of HNTB, a nationwide infrastructure design firm assisting with the project.

Other improvements include creating a new Route 146 bridge near the Orms Street exit, a repair of the Atwells Avenue on-ramp, and rebuilding 11 bridges along the I-95 corridor.

Concerns from the public during the Dec. 10 online presentation were minimal and ranged from questions about noise due to construction and pile driving to safer pedestrian and bicycle crossing on the Orms Street bridge.

"We're just finishing preliminary design and heading towards final design," Pompei said. "So, all of those discussions are currently just starting and getting under way."

The I-95 Viaduct Northbound project is expected to cost $265 million. The work is scheduled to start next spring, with completion anticipated by summer 2025.

Skanska-Manafort Joint Venture won the bid to make the viaduct and highway improvements.