The work began in mid-March and is scheduled to be completed on Oct. 21. 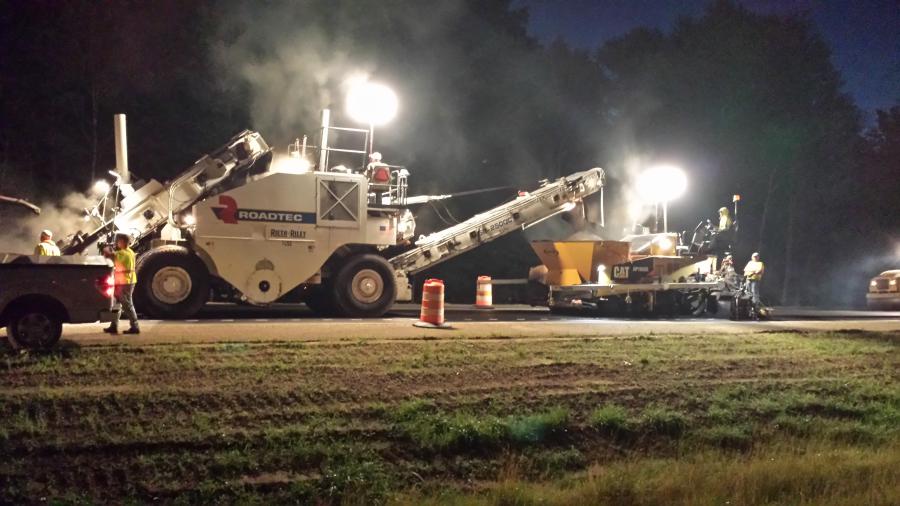 The work began in mid-March and is scheduled to be completed on Oct. 21, although some of the work on eastbound I-94 will be completed in the 2017 construction season. The project, funded by 80 percent federal and 20 percent state funding, is one of several ongoing projects to resurface I-94. This section of repaving covers more than 7 mi. (11.2 km) of the highway in Berrien County between Red Arrow highway exit 16 in Bridgman and mile marker 22.6 east of Puetz Road and Stevensville

“I-94 is a vital commercial and commuter corridor,” said Nick Schirripa, communications representative of MDOT's southwest region. “The road surface has deteriorated enough since it last was resurfaced about 15 ago, it needed to be repaved. We expect these repairs to keep the road surface in good condition for another 15 to 20 years.”

The project includes I-94 bridge repairs over Puetz Road and Lost Dunes. Substructure repairs, deck repaving, new railing and bridge widening are expected to extend the bridges' lifespans by 15 to 20 years. Schirripa added that drainage improvements and repair or replacement of about 30 culverts also will help extend the roadway lifespan.

“More than 43,000 vehicles a day pass through this I-94 corridor, including almost 12,000 commercial vehicles,” Schirripa said. “Our contractor is using a type of asphalt mixed with a polymer binder, making the pavement stronger and more durable than an asphalt surface with a standard binder. Given the economic importance of the I-94 corridor to Michigan, and indeed the Midwest, it's vital to build a roadway that will support the heavy traffic volumes.”

The construction has resulted in lane, ramp and local road closures.

“Motorists can expect daily single-lane and nighttime double-lane closures on I-94 during construction,” according to the web page for the project. “Puetz Road will be closed with a detour posted. There also will be temporary ramp closures at Red Arrow Highway Exit 16 and Grand Mere Road Exit 22.”

Rieth-Riley has worked on numerous projects on I-94 in the past three years that are similar to the current project.

“I don't think there is anything that we're not prepared for,” said Rick Haney, area manager of Kalamazoo and Benton Harbor for Rieth-Riley's office in Benton Harbor. “We have a pretty good track record and a staff that knows what to do. This project is fairly simple — it's multiple phases, but a lot of the work has to be done at night, which is a pretty difficult challenge. The night paving part of the project is tough and there is also some upgrading being done to the existing bridges.”

A lot of projects in the $14 million range are delivered in two years, while this one is being completed in less than eight months.

Larry Adams, Rieth-Riley's general superintendent of the project, said that the bridge work is strengthening the structures and capping the decks, which is taking place as the road is being repaved.

As noted, the repaving will be done at night. Currently crews are focusing their efforts on strengthening the shoulders to maintain traffic during the day and some ramp paving.

“We just finished Phase 1, which had us widen two of the bridges to maintain traffic,” said Haney. “We're pushing the traffic over on the shoulder so we can work safely and construct Phase 2 of the project. We also did a lot of clearing, tree removal, earth excavation, ditch work, and permanent fence removal and replacement. Phase 2 is to rebuild the other half of the bridges, and mill and level the inside lane.”

The subcontractors did a lot earth work and fencing operations. There are 13 subcontractors associated with the project, including Kalin Construction for earth excavation; CA Hall for the bridge work; Northern Construction for all the milling; Give Them A Break Safety for traffic control; and Action Traffic for the guard rail and cable guard rail.

“We did a lot of pre-planning to get ready for the project and with all the subcontractors,” said Haney, “the scheduling had to be precise.”

The warm weather will help with the paving operations.

“Let's hope so,” said Adams. “This rain is not helping, but when the weather takes a turn for the better that will help our production and scheduling move forward. The crown of the road is in the middle of the center lane and we are going to pave 18-foot-wide one lane and half of the center lanes to the crown point. We have paved 18-foot –wide on I-94 on previous projects, and with proper auger extensions, we achieved a good ride.”

The project is about 8 mi. (12.8 km) from Rieth-Riley's closest yard/shop and mechanics are brought in as needed. Rieth-Riley is doing the paving and is using Cat 1055e pavers, a Roadtec SB 2500C transfer machine, a CC 5522 Dynapac high frequency roller, a CB 54 Cat roller and eight-axle Red River Flowboy trailers to deliver materials.

Equipment operators oil and grease their own equipment daily.

“The greasing and replacement of oil and fluids for maintenance is done through Michigan Cat,” said Adams. “Our equipment manager, Adam Bender, organizes all of that and he tracks all of the servicing on our equipment through GPS, which gives him the information on the hours that a piece of equipment has been used to determine when it needs to be serviced.

“Our pavers are two years old and we have a brand new roller,” he said. “Any time we have a breakdown, it's run through our equipment group and Bender, who contacts Michigan Cat, which goes to the work site and troubleshoots the problem.”

Haney and Adams are leaving nothing to chance to meet the completion date.

“It's a tight schedule and we're looking at no room to spare,” said Adams, who has been with Rieth-Riley for 10 years. “We're putting all our effort into making the delivery date. Of course there are some down times for some aspects of the work as we progress, but we're going at it steadily.”

“We've been working six days a week since the project started. Our crews are highly experienced in highway paving be it day or night, and take great pride in the quality of their work,” said Haney.

This year Rieth-Riley is celebrating its 100th anniversary. The company operates mainly in Indiana and Michigan and has been employee-owned since 1989.

“Working for Rieth-Riley is like being part of a large family,” said Adams. “Each area reaches out and helps whenever they can.”