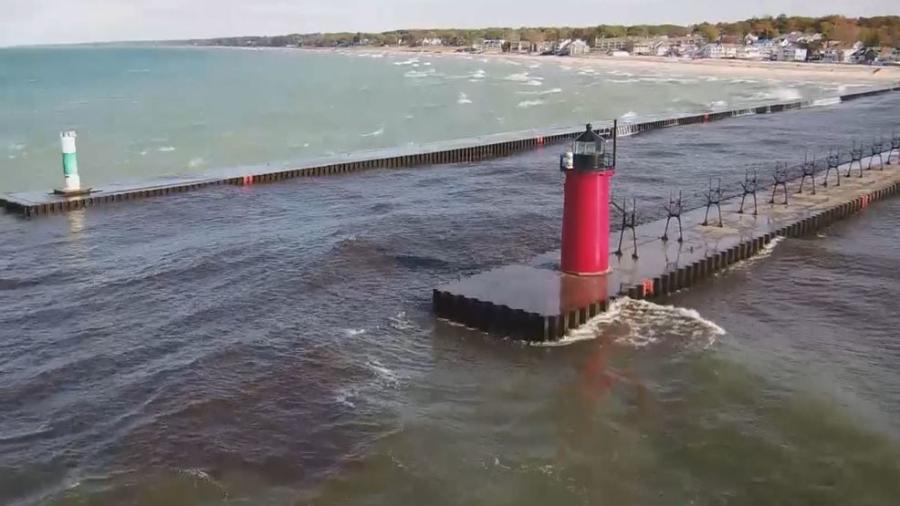 Lake Michigan and Lake Huron water levels are nearly 2 ft. higher than the long-term average that's been recorded for the lakes over the past century. (WWMT/Sky Eye 3photo)

The Army Corps of Engineers said water levels for the two lakes averaged 580 ft. in December, which is nearly 2 ft. higher than the long-term average that's been recorded for the lakes over the past century, the Traverse City Record-Eagle reported.

Officials predict water levels will have an overall increase this year of 4 to 6 in.

Brandon Oaks owns the Silver Lake area-based Pure Harbor Dock and Boat. He said the rising levels means he constantly has work removing old docks and designing new ones that will clear the water.

“We got a tremendous amount of phone calls,' said Oaks, who has been in business for 17 years. “We have to build these docks different every year because of fluctuating water levels.'

Water levels depend on snow accumulation across the Great Lakes basin and ice on the lakes, which can slow water evaporation, said Keith Kompoltowicz, the chief of watershed hydrology for the Detroit district of the Army Corps of Engineers.

“Typically, when we see larger snow pack across the Great Lakes that points to a larger seasonal rise,' Kompoltowicz said.

Matt Short, the owner of Lakeshore Marine Construction, said he's seen an increase in the number of shoreline stabilization jobs he's done along Lake Michigan. Though he normally works on inland lakes, the lake's high water levels have caused erosion, he said.

“It's tearing up the people's shorelines,' Short said. “Some of them look like cliffs, and there are trees laying in the water and on beaches."