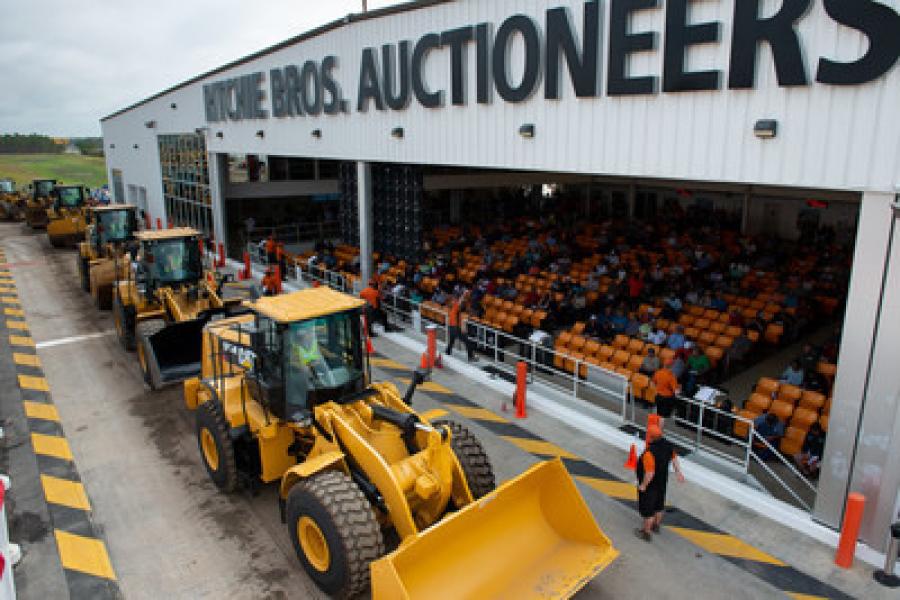 Over six days the company sold more than 13,350 assets for a record of over $297 million — up seven percent from last year's $278-plus million total.

A sea of equipment stretched over the 220-acre Ritchie Bros. auction site in Orlando, Fla., last week as the company hosted its largest auction ever. Over six days the company sold more than 13,350 assets for a record of over $297 million — up seven percent from last year's $278-plus million total.

The selection of equipment attracted more than 15,900 people from 88 countries — setting a new site record — including more than 11,300 bidders participating online in real time from around the world. At the end of the six-day event, approximately 84 percent of the assets were purchased by buyers from outside Florida. U.S. buyers purchased 85 percent of the equipment, while international buyers from countries such as Australia, China, Colombia, Germany, Nigeria and the United Arab Emirates purchased 15 percent. Online buyers purchased approximately 49 percent of the equipment.

"We had a great week in Orlando, helping more than 1,150 companies sell their surplus equipment to buyers from nearly every corner of the world," said Ravi Saligram, CEO, Ritchie Bros. "Orlando is the Super Bowl of auctions and our team was prepared and performed tremendously, helping us set multiple company records, including our largest ever gross transactional value (GTV) and the most equipment we've sold in one auction in 60-plus years of business. On Day Five alone we sold approximately 2,300 items for more than $82 million — the largest single auction day in our history!"

Ravi continued, "We achieved GTV of $297 million for the 13,350 items sold in Orlando, representing growth of seven percent in both GTV and lots sold versus prior year, a positive indicator of loosening supply. Our results reflected strong pricing for premium construction assets with low hours. Conversely, we witnessed pricing pressure on assets with higher hours, which indicates supply may have begun to harmonize with demand. Transportation assets, including over-the-road trucks and vocational units, continue to achieve strong prices. Importantly, I want to thank all our consignors and buyers for their confidence in us — and our employees who worked very hard to make the auction a tremendous success and add value for our customers."

Every single item was sold without minimum bids or reserve prices.

"Ritchie Bros. is the only auctioneer I trust and for me trust is everything," said Juan Carlos Hernandez Perez of Hormigón Express del Potosí SA de CV (Mexico)

"I really enjoy coming to the Orlando auction because there are so many pieces of equipment, you meet so many great people, and you get to enjoy the great hospitality of Ritchie Bros.," said Joey Chambers of Superior Custom Services Inc. (Georgia)

"We do a lot of buying in Orlando because everything you need is going to be here. It doesn't matter the manufacturer or the type of equipment, there is something for everyone. For people like myself, who were born and raised around equipment, events like Orlando are a lot of fun," said Ronnie Hedrick Jr. of Bul-Hed Corp. (Florida)

"The Orlando auction is a tremendous spectacle to come here and see — the number of machines and buyers. We are able to liquidate an entire fleet of equipment in one week, using the auction to 'cash out' those assets and buy newer equipment," said Michael Vazquez of Meco Miami, Inc. (Florida)

"Ritchie Bros. is a first-class operation. As a buyer I know I am purchasing equipment from a fair and honest company and as a seller, Ritchie Bros. gets us the exposure we need — more people buy from Ritchie than any other auction," said Wayne Smith of Wayne's Backhoe Service (North Carolina)

Ritchie Bros. currently has more than 55,000 equipment items, trucks, and other assets listed for sale through its auctions and marketplaces.

For a complete list of upcoming auctions and equipment available, visit www.rbauction.com and www.ironplanet.com.