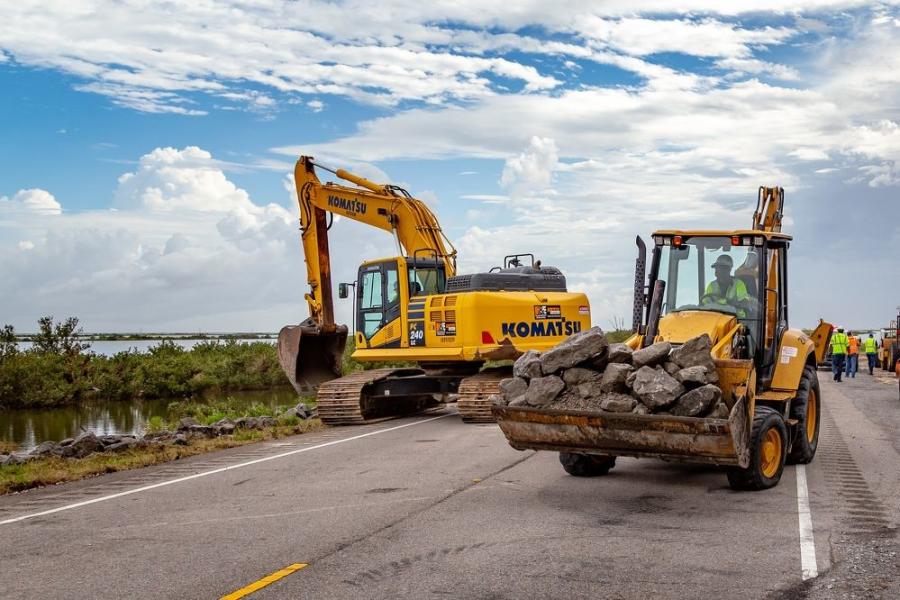 The team brought in 7,000 tons of riprap to replace the rock that had been washed away.

Hurricane Ida roared ashore on Aug. 29, 2021, in southern Louisiana, barreling through houses and businesses, ripping out chunks of roadway from Louisiana Highway 1 and scattering them in the nearby marsh.

The 150-mile-per-hour winds and flooding caused approximately $18 billion in damages to the state, second only to Hurricane Katrina in 2005. The storm uprooted trees, slashed through powerlines and effectively cut residents along LA 1 off from the rest of the world.

Long after word of the disaster had disappeared from the national news, local residents had to continue to cope with the after-effects of the storm. Leaning on its past partnership, Louisiana Department of Transportation and Development (DOTD) personnel and Barriere Construction predetermined a location to meet to see what they could do to quickly restore LA 1 to a safe condition for residents, businesses and relief workers arriving from around the country. DOTD and Barriere representatives met on September 1 when the winds were just returning to normal and power was still out. The Barriere team accompanied local law enforcement and the DOTD to assess the damage. An important objective was to get the roads cleared and useable as soon as possible. 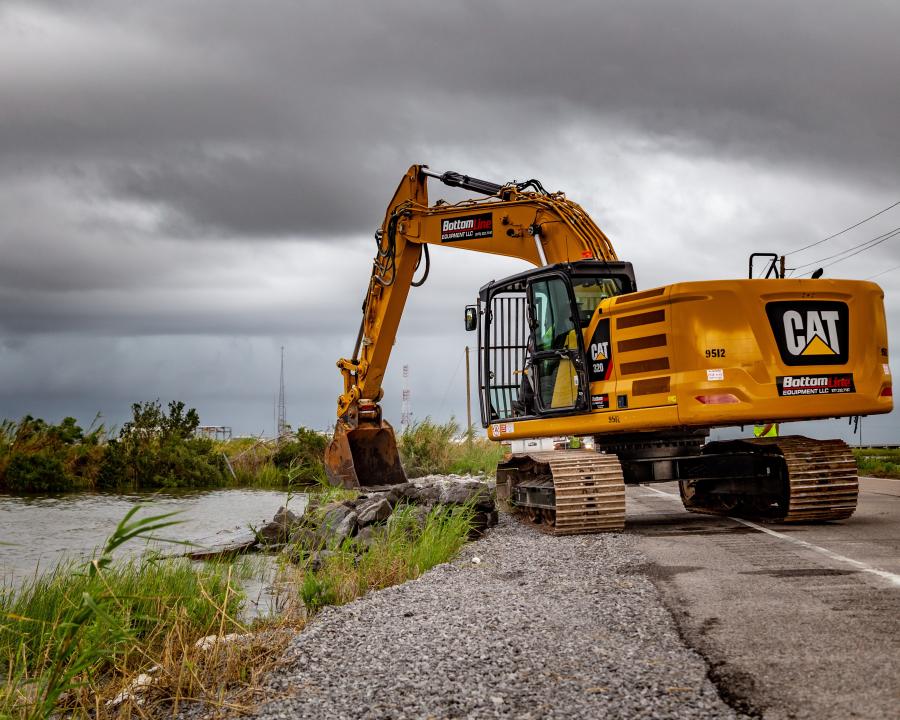 "The damage was severe," said Ricky Quigley, operations manager of Barriere. "The storm deposited so much sand on Grand Isle that it often felt as if we were driving on dunes. Multiple sections of roads were washed away and the road shoulders had become ditches 10 feet deep." Barriere worked closely with DOTD Area Engineer Christopher Rogers on the rebuild.

One early step was bringing in 7,000 tons of riprap that would be needed to shore up the washed out shoulder areas. The rock was barged down the Mississippi River by a supplier, Pontchartrain Materials.

Barriere and DOTD maintenance crews quickly brought in traffic control devices to help local motorists navigate around severely damaged or missing sections of the road. After the assessment, Barriere planned to start hauling asphalt to patch and reinforce the damaged sections of the road. Unfortunately, because the power was out in the area, Barriere was not able to produce asphalt at its asphalt plant in nearby Boutte. Instead, the team produced the asphalt at its plant in Baton Rouge, some 200 mi. away.

Hauling asphalt such a long distance was just one of the many difficulties the Barriere team encountered. Downed power lines, shredded guardrails and other debris prevented the team from using regular pavers and normal equipment. Workers had to use skid steers, shovels and sheer muscle power to place the asphalt. The Barriere team needed approximately 8,000 man-hours of labor to make the roads operational again.

"We asked a lot of our employees and they responded," said Quigley. "Many of our people lived in the area where the storm hit. So, their homes were damaged or destroyed and they were often living with relatives. The whole episode showed us again that our employees are our greatest asset."

In addition, gas and diesel for equipment were in short supply. And finally, COVID added another layer of difficulty. That meant that workers from the New Orleans area could not carpool together. Also, shortages of food and other necessities meant Barriere had to supply that as well for its workers.

The project required rebuilding sections along a 20-mi. stretch of LA Highway 1 from Golden Meadow to Grand Isle. The causeway bridge weathered the storm with only the loss of the toll booth. Workers noted that the water covered portions of LA 1 between Golden Meadow and Leeville to a depth of 13 ft.

Within seven days, the paving team had a temporary road opened for use by emergency vehicles. Five days later, the road was accessible to residents and business owners. In all, the team brought in 2,300 tons of asphalt and approximately 2,000 tons of limestone to rebuild subgrade which had been washed away. Another 1,100 cu. yds. of dirt was needed to rebuild the shoulder of the roads and eliminate the dangerous drop-offs that the storm had created. Quigley estimated that another 2,000 tons of stone will be required to further reshape the shoulders to the required standards. Contractors are continuing to replace guardrails that were destroyed as well.

The southern section of the road required workers to use approximately 1,300 tons of asphalt to patch the damage with some additional subgrade repairs necessary.

In addition to the work on LA 1, the Barriere team completed patches on LA 45, which was also hit hard by the storm. 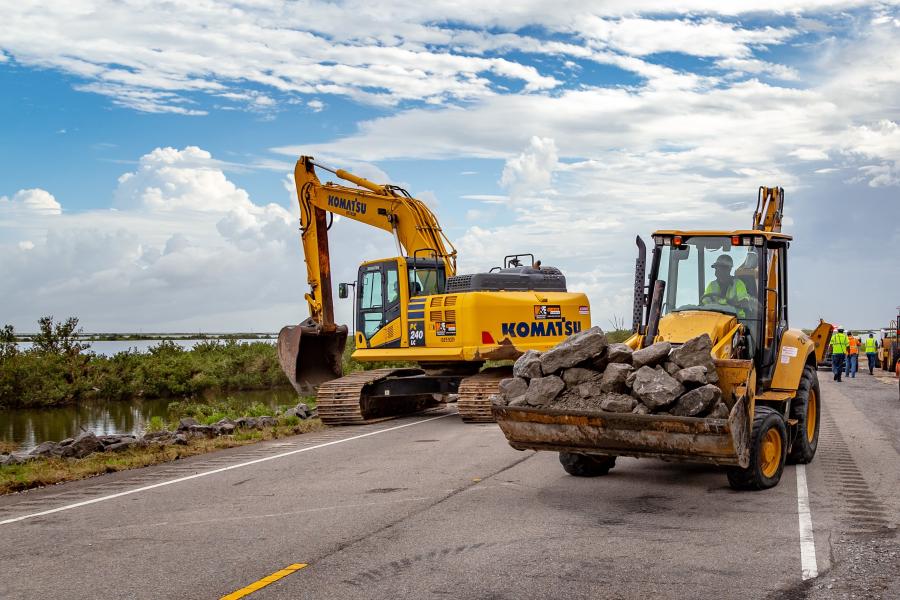 With emergency repairs completed, Barriere and other contractors have moved on to more permanent repairs, which started in January 2022. The paving teams will be using traditional means to mill about 4 in. of the temporary and damaged roadway and replacing it with a 2-in. lift of state spec level 2 F wearing course and binder. The project will require approximately two weeks to complete.

The cost of the emergency repairs was approximately $2.8 million. Adding it to the permanent repairs, the total cost will be approximately $3.3 million.

The quick road repairs benefitted more than just the local residents. Port Fourchon is located at the end of Highway 1 and is a docking site for enormous ships that support approximately 90 percent of oil and gas platforms in the Gulf of Mexico. The port transports approximately 15 percent of the nation's crude oil and 5 percent of its natural gas through this location.

"Being the contractor of choice for a project like this was meaningful," said Quigley. "It shows that our work in the past on repair projects like this meant we could be trusted. It was an opportunity to give back to the community in a tangible way and help people get back on their feet as quickly as possible. Working on this project was very rewarding." CEG

?Louisiana Department of Transportation and DevelopmentHurricaneInfrastructureLouisianaRoadwork