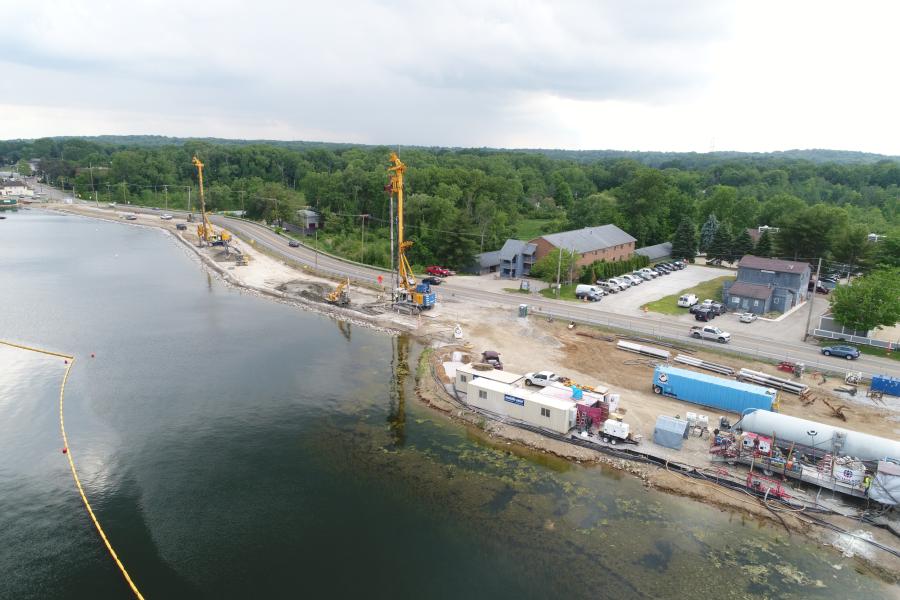 Work proceeds on the main embankment of the East Reservoir dam in Portage Lakes State Park.

The $33 million construction of a new East Reservoir dam for the Ohio Department of Natural Resources (ODNR) in Portage Lakes State Park in Coventry Township, Summit County started last December and is expected to be completed this spring.

The new dam is located in front of the existing one built around 1840, and the project, awarded to the Ruhlin Company, is part of the ODNR's ongoing initiative to repair and upgrade its aging dam infrastructure. It is being funded through the state's capital appropriations budget. 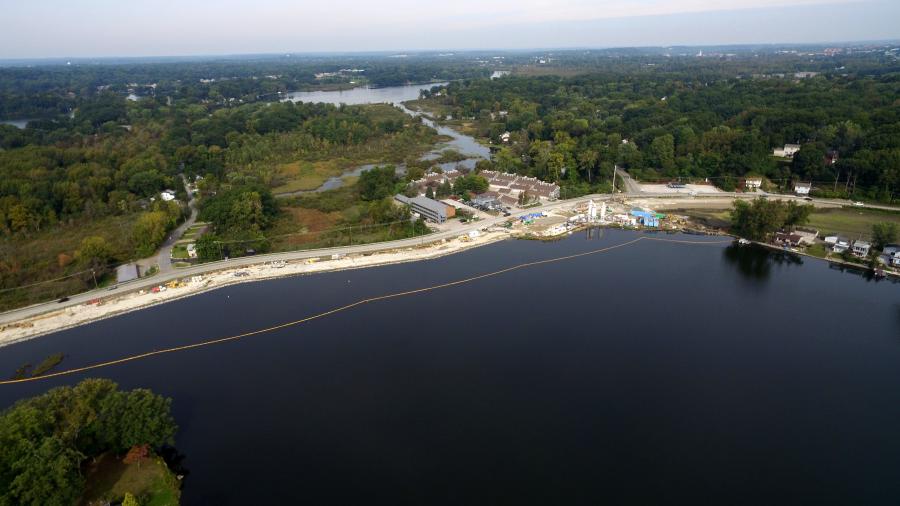 The old dam, built to create a reservoir for the Ohio and Erie Canal, which now has Portage Lakes Drive on top of it, has surpassed its lifespan. It failed once during a 1913 flooding event, as noted in ODNR public presentations.

The old 1,400-ft. dam consists of three distinct sections called the south embankment, main embankment and north embankment — 200, 925, and 275 ft., respectively, with a maximum crest width of 40 to 50 ft. — and impounds approximately 900 surface acres of water. It receives water flow from West Reservoir through the 1,500-ft. "Iron Channel."

"As a Class I high-hazard potential structure, a sudden failure of East Reservoir Dam likely would result in the structural collapse of at least one residence or commercial/industrial business and loss of human life. (Hazard ratings refer to the consequences of dam failure, not the dam's condition)," states the project web page.

"[The dam] currently has deficiencies that must be addressed to bring the dam into compliance with dam safety standards. The deficiencies include insufficient storage/discharge capacity, and it cannot pass the required design storm safely. Excessive and uncontrolled seepage through and under the embankment, especially at higher lake levels, along with severe concrete deterioration on the north spillway and lake drain structure also are present. The spillway presently has a severe discharge capacity deficiency that is well below dam safety requirements."

Tetra Tech, a consulting and engineering firm, examined the dam structure and found various deficiencies that required remediation to meet safety requirements and to deal with seepage. The firm completed the final design for the new dam in early 2017.

The work site is located along Portage Lakes Drive between South Turkeyfoot and North Turkeyfoot roads. The new dam will be constructed using deep-soil mixing (DSM) and will have an immense underground cutoff wall to control seepage and a gravity block to resist sliding and overturning. These DSM elements will protect the existing embankment. The U.S. Army Corps of Engineers issued a permit for the work to proceed.

Local impacts on roads and bridges are handled by Summit County, with utility impacts handled through the county, city of Akron, and local utility providers. The Ohio EPA approved the project and issued an environmental permit to the ODNR.

Water levels have been maintained and reduced only as necessary to allow crews to do their work, and the ONDR ensured that the park could operate as normally as possible during the spring, summer, and fall, particularly for boating and recreation.

"The deep-soil mixing equipment is loud, but equipment operations will not stay in one place for more than a few days," noted the web page. "ODNR will provide more detail on when noise is expected to affect specific areas as more information becomes available. There will be some temporary impacts to local traffic as heavy construction equipment is moved into and around the construction site. Additionally, there is some construction required on Portage Lakes Drive that will require a temporary and minor traffic detour. At least one lane in each direction will be maintained at all times with just one or two temporary exceptions when that phase of construction work occurs."

Phase 1 included the construction of a DSM cut-off wall and gravity portions of the new dam located in the south embankment and portion of the Main Embankment. The project is on schedule and construction is ongoing on the three dam sections.

The project is on schedule and in effect, the actual "new dam," the core of the project, was completed just prior to December.

A small portion of the work area known as the Cat Swamp, located near the north embankment, was drained to construct the north spillway and gatehouse and will be refilled after they are completed. This element also had a concrete channel demolished and replaced with a new, wider, concrete channel. Soil-cement drilling continues in the north and main embankments in the direction of the Rosa Villa Restaurant parking lot, where the project team will tie it into the higher ground.

"To complete the necessary work, the soil-cement drilling will need to cross Aqua Blvd.," the web page states.

Along the south embankment, a protective concrete cap for the soil-cement structure — i.e., the new dam — was poured and topped with 2 ft. of soil cover. A temporary bridge was previously installed to provide access to place the soil cover and will stay in place temporarily until early 2019.

"We've completed 95 percent of the deep soil mixing," said Doug Hartz, Ruhlin's project manager. "That is the key element of the new dam which includes the cut-off wall and gravity sections. The dam also has a protective concrete cap and parapet which is then covered with top soil and seeded. We have to complete the north embankment, the concrete channel and the north spillway and gatehouse. The concrete cap and parapet also needs to be completed on the main and north embankments."

Hartz stressed that work site is tight, with limited space for equipment and materials.

"We have a lack of laydown space as the project is located in a residential area and small business district," he said. "We had time to develop a plan to deal with the lack of space during the preconstruction phase of the project. The construction phase is expected to take 18 months. We've been in the construction phase for over a year now. Safetywise, there's an emergency action plan which is a collaborative effort with the ODNR and Tetra Tech to control the pool and maintain the integrity of the old dam during construction. Pool levels are monitored closely during weather events and water was controlled through the south spillway. Once work started on the north spillway, siphons were installed in the south spillway to control water.

"We monitored seepage through the existing dam, being sensitive to this threat and for potential unforeseen conditions when working adjacent to the old dam," he added. "The old dam is a sand embankment that is built on a sand foundation and is considered a very fragile structure." 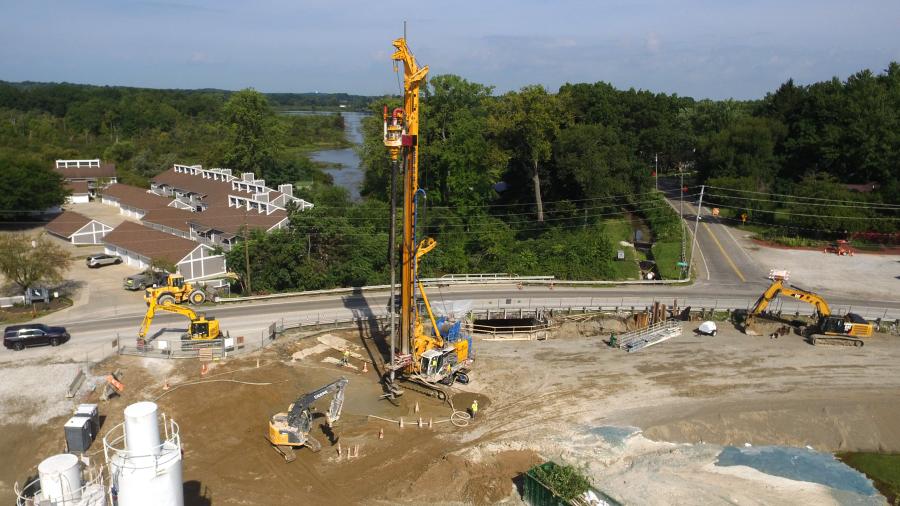 Crews will work throughout the winter, and communication efforts will continue with the community as heavy equipment continues to be on site. The ONDR provides updates on social media concerning upcoming work and what crews are doing during their 7 a.m.-to-7 p.m. shifts, Mondays to Fridays.

"We scheduled our work to make sure that activities in the water are nearly completed before winter," said Hartz. "We also planned our work so we would be working in the dry for the concrete work on the north gatehouse and spillway."

Hartz noted Ruhlin, Tetra Tech, and ODNR are able to solve issues that arise, often within a few days and that a collaborative effort is ensuring steady progress.

Sediment and erosion controls are in place, including a turbidity curtain which separates the work zone from water traffic.

The project's two phases have essentially blended into one.

"We started later than anticipated and we went directly from Phase 1 to Phase 2 without stopping," said Hartz. "We brought in about 50,000 yards of sand that was placed in front of the existing dam to provide a working platform to perform the deep soil mixing. The top 16 inches of sand was then cement-stabilized. When you're working around and in water, you have to be careful of the stability of the sand along the platform that you are preparing. We're concerned about the large volume of trucks pulling in and out of the work site and the drill rigs used to perform the DSM.

"The drilling rigs weigh over 300,000 pounds, and we did a lot of pre-planning in advance and prior to placing heavy equipment on it," he added. "This equipment was assemble on site and disassembled and then put back together as we proceeded from the south to the north embankments. We were able to move equipment on Portage Lakes Drive if it didn't exceed the weight and size limitations. Knowing that we were in a residential area, the subcontractors didn't bring equipment that is too big for a smaller site."

"Mike Garver, who has geology degree and geotechnical experience, has worked with me on several projects in the past and provides excellent leadership," said Hartz. "Garcia is great on project engineering and administrative tasks. 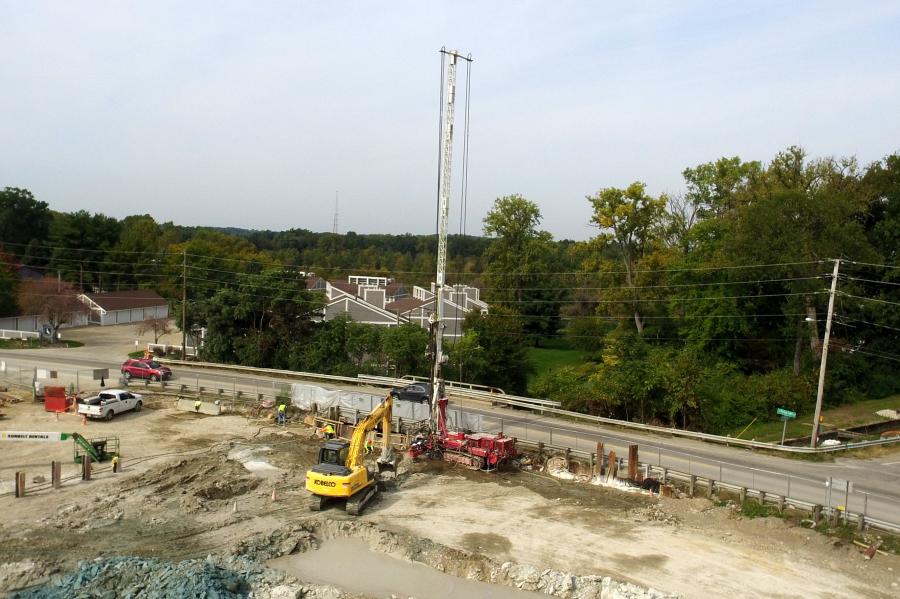 Residents, when surveyed, said they preferred the work to be done via day shifts. Peak days have about 30 construction workers on site. Key subcontractors include Nicholson Construction Company, which is performing the deep-soil mixing and jet grouting. All Aspects Contracting is performing the demolition and The Ruhlin Company is placing the sand embankments and concrete. Finally, C. J. Zak is placing the soil cover, topsoil and seeding.

"Nicholson, our deep soil mixing subcontractor did not have any water and moisture issues because we tried to stay in the dry as much as possible," Hartz said. "The sand berm was pushed in front of the land or existing earthen dam and we just kept working our way along Portage Lakes Drive starting from the south end and moving towards the north end. We only went in the reservoir about 60 feet. Our sand was placed with a dozer and an excavator." 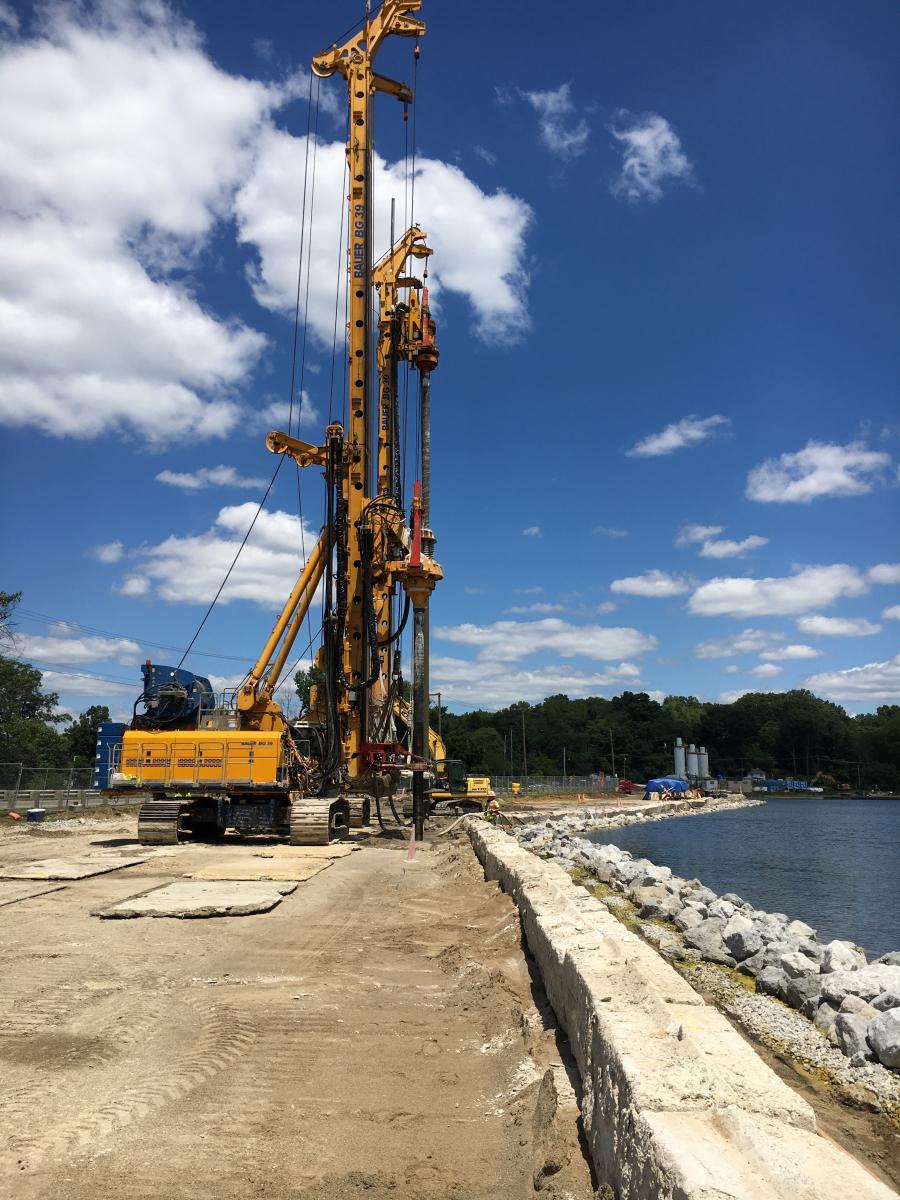 The existing dam has not been touched.

"We try not to disturb it because it is in such poor condition," said Hartz. "We were worried that we may have breech. It's been a successful project, so far and it's progressing on time and budget."