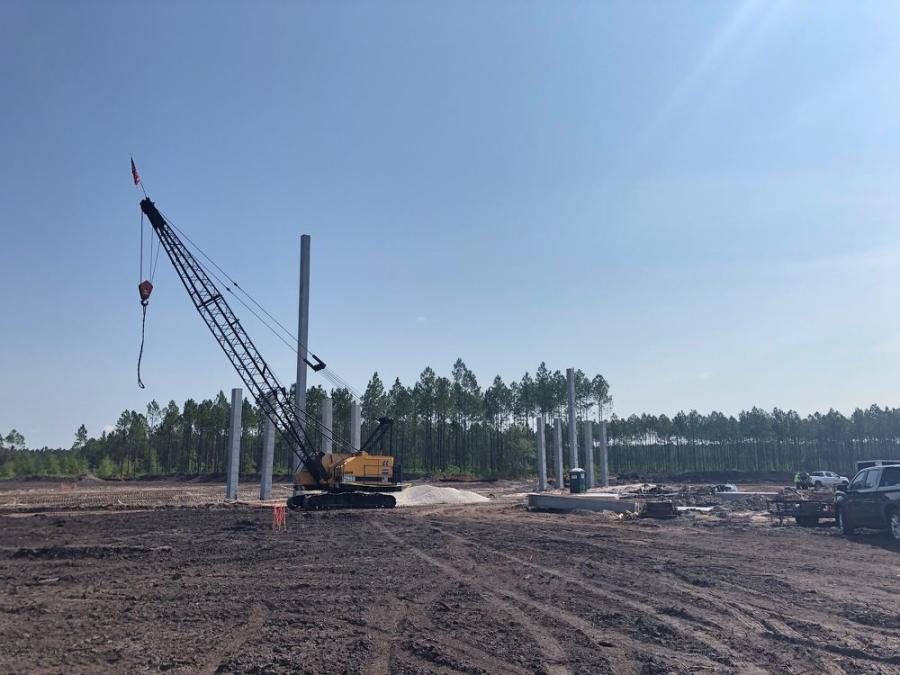 An American 5299 A crawler crane working on one of the three phases of FDOT’s roughly $1.3B First Coast Expressway project.

Phase 2 of the Florida Department of Transportation's (FDOT) First Coast Expressway project (FCE) is underway and expected to be delivered in mid-2025. Back in March, crews from Sacyr Construction USA LLC first began working on the north segment of the job, a $229 million contract that is being funded by the Florida Turnpike Enterprise.

"The First Coast Expressway [SR 23] is a multi-lane, limited access toll road that, once completed, will cross parts of Duval, Clay and St. Johns counties," FDOT stated on the project web site. "Expressway traffic will pass through electronic toll gantries without stopping. The gantries will contain an electronic system that will either detect the vehicle's SunPass transponder device or scan the vehicle's license plate for a toll-by-plate invoice in the mail. The total length of the proposed roadway is approximately 46 mi. The FCE will reduce congestion on other major roadways in the region, important not only for daily commuters but also critically important during times of storm-related evacuation." 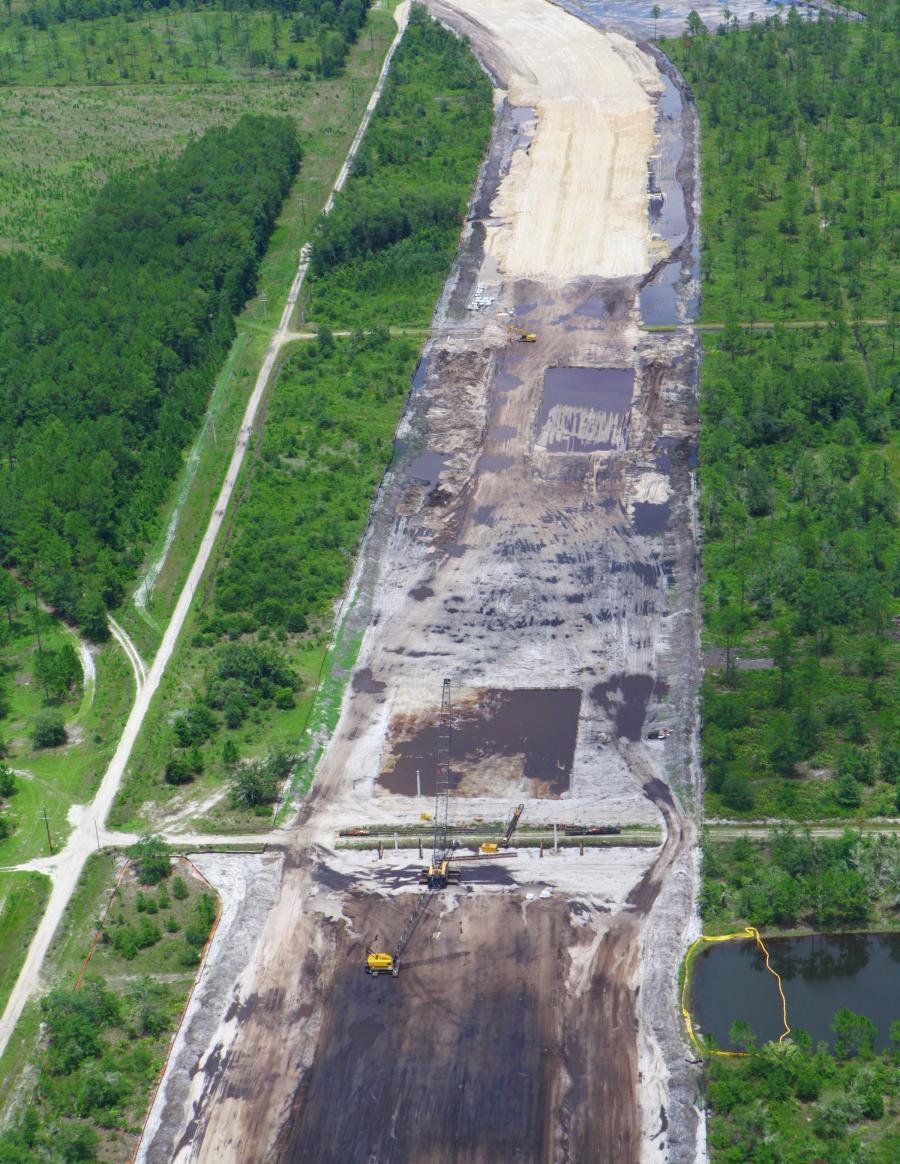 The northern segment is adding 10.5 mi. of new multi-lane, limited access toll roadway; constructing a drainage system for the new roadway with a series of storm water ponds and retaining walls along SR 23; and installing new lighting, highway signing and guardrails. It also will see the building of three new tolling facilities with overhead gantries and electronic tolling east of Baxley Road, west of the County Road 218 exit and just west of the SR16 exit; 26 bridges along the roadway, including two new bridges over Black Creek in the Lake Asbury community; a diverging diamond interchange (DDI) at Henley Road; and noise walls south of Sandridge Road in the Rolling Hills community.

The north and south sections of the FCE will be able to handle a large volume of cars and trucks. FDOT projects annual average daily traffic at specific interchanges, and each of those has a different number. For example, in 2050, FDOT anticipates average daily traffic at the U.S. 17 interchange to be 60,400 vehicles, but the numbers will be different at various ramps and interchanges throughout the north and south projects.

RS&H, the prime consultant, designed the new highway infrastructure. The company encountered a number of engineering challenges during the design phase of the project.

"A constricted right-of-way was one of them," said CJ Youmans, PE, CFM, senior transportation engineer with RS&H. "During the planning phase, FDOT took a minimalist approach with establishing the right-of-way along the corridor to reduce impacts to residential communities and businesses, as well as to reduce impacts to wetlands and other environmentally sensitive areas. This avoidance and minimization approach resulted in over 25 mechanically-stabilized earth (MSE) retaining walls to contain the embankment slopes within the ROW.

"The project proposes innovative Diverging Diamond Interchanges (DDI), which are designed to reduce crashes and increase safety by diverting and reversing the direction of travel within the interchange," he added. "Many of these interchanges will be constructed on existing roadway facilities with vehicles, pedestrians and bicyclists to manage during construction, creating a potentially dangerous environment for both the traveling public and construction workers. Detailed traffic control plans with multiple phases and various special details were developed to maintain traffic flows and improve safety. RS&H coordinated with local schools to determine student travel patterns to maintain safe connectivity in the mornings and afternoons."

The fast-paced schedule also was an issue for workers. 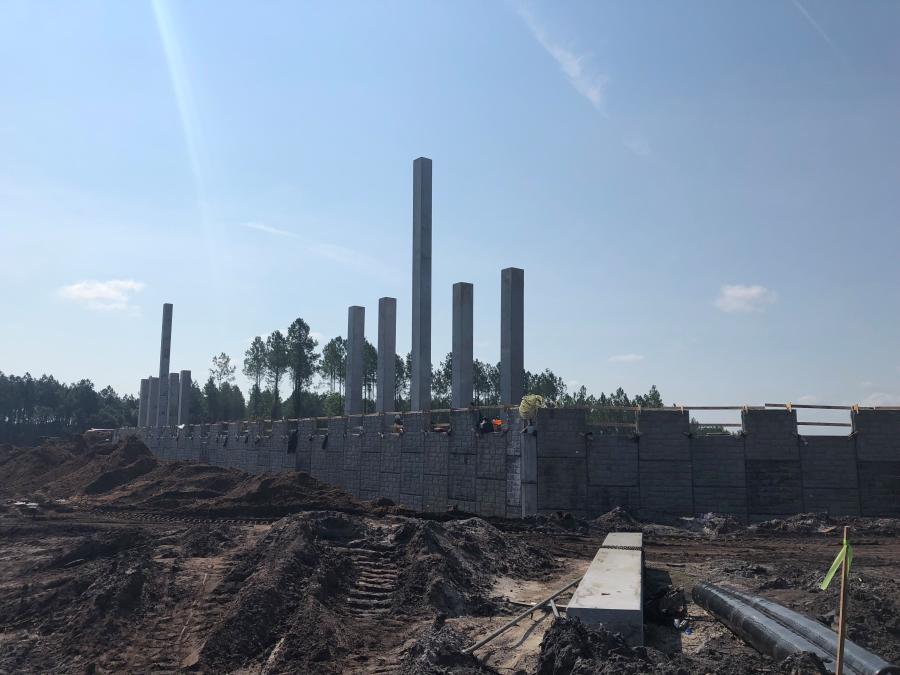 "Two segments of the corridor received advanced funding that required a fast-paced project delivery schedule," Youmans explained. "RS&H and its team of subconsultants used advanced 3D modeling techniques and software packages to make smarter design decisions earlier in the process. We had to develop on-the-fly training and development programs to improve the engineering capabilities of the design team. And because of these investments made to develop young engineers early in the design process, the team delivered the project early with a significant level of quality."

Once constructed, the 43 bridges and 44 retaining wall structures throughout the corridor will have a 75-year design life.

"Most of the drainage infrastructure has been designed to last over 50 years and the asphalt roadway pavement is anticipated to last over 20 years before needing resurfacing," Youmans said. "The pavement designs for First Coast Expressway strongly considered the potential for a high number of heavy truck traffic in the future. In addition, as with most Florida Turnpike Enterprise (FTE) tolled expressways, the toll rates, which have not been established with this segment, will be based on the number of vehicle axles. Heavy trucks typically feature more vehicle axles, and therefore, will be tolled at higher rates."

Prior to construction, FDOT performed an extensive, 32-month long geotechnical investigation to evaluate soils throughout the alignment.

"The geotechnical team, led by Terracon, encountered a wide variety of unpredictable soil conditions such as muck, organics, clayey sands, rock and limestone," Youmans said. "Many of the bridge foundations required special design considerations to allow for improved construction and installation techniques. In addition, over 350,000 cu. yds. of subsoil excavation will need to occur to remove and replace poor soils along the corridor."

RS&H and FDOT coordinated with more than 10 utility providers to reduce utility conflicts and costly relocations, as well as to minimize potential delays during construction. 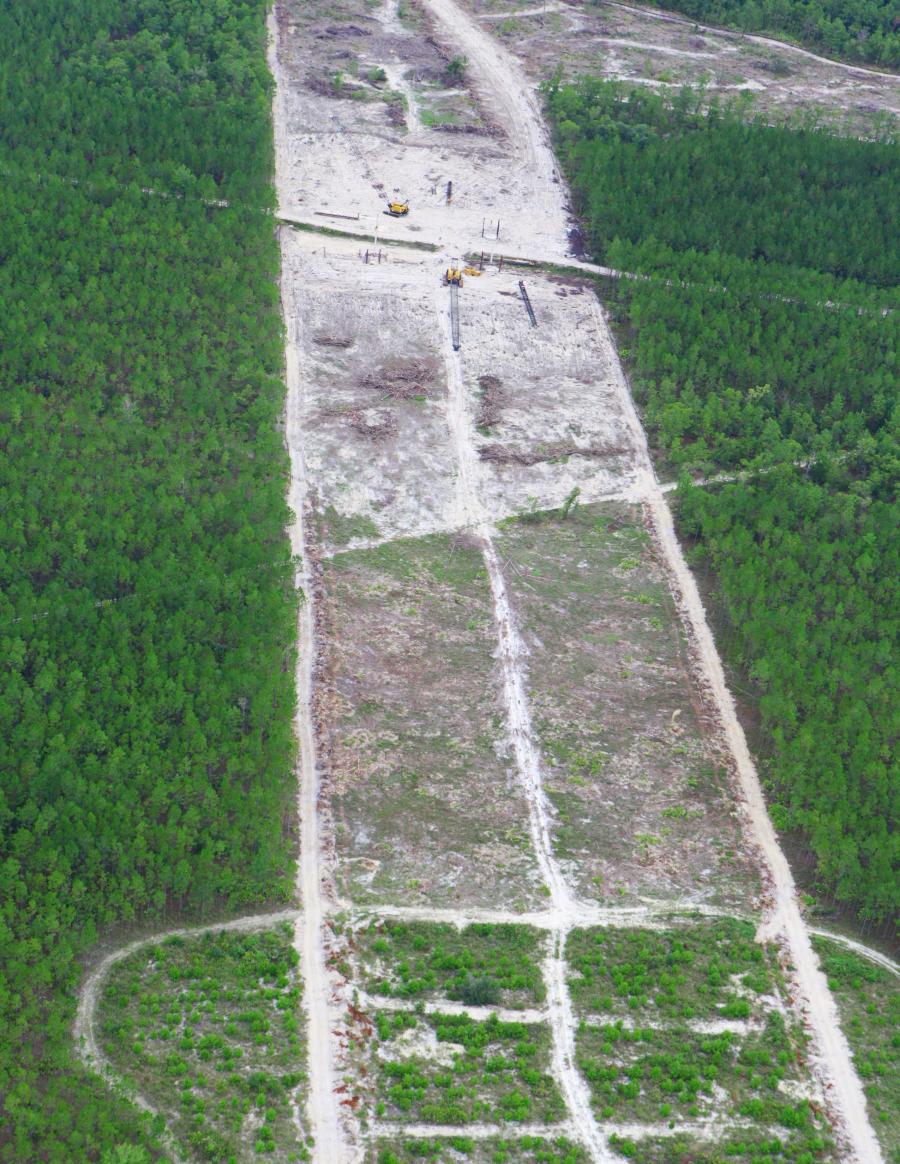 "The design team worked diligently to reduce drainage and other underground conflicts with a major 16-in. gas main that crossed the alignment multiple times," Youmans said. "FDOT coordinated closely with the local Clay County Utility Authority to construct large utility casings along the corridor to serve future water and wastewater utility needs. This collaboration will prevent the need to reconstruct sections of roadway for future utility construction, providing significant cost savings for taxpayers."

At this point there are no major traffic impacts, but due to active sidewalks in the area, Sacyr is required to make necessary accommodations for pedestrians and physically disabled during construction and construct temporary access points at SR16 and SR 21.

"The project needed to get off to a fast start, which it has," said Public Information Specialist Samantha Rambeau of Atkins Global. "The contractor's benchmarks [for 2019] will be ramping up to 15,000 cu. yds. of dirt placed a day, completing all pile driving south of Black Creek and the Black Creek Bridge."

"Depending on the scope of work, some materials are stockpiled on site, while others are delivered on an ‘as needed' basis," said Billy Jennings, Sacyr's construction manager.

"Clearing and grubbing began at Sandridge and has moved north and south to north of State Road 16 and towards CR 220," Rambeau said. "Work on drainage and retaining walls has begun, and work on the toll facilities will be in the final two years of the project."

"Bradley Creek is a priority because it provides connectivity to the Sandridge area and the Henley Road area," Rambeau stated. "Then it will be Black Creek. The CR 218 bridge will be the first built. Neighborhood impacts are obviously a factor, as well as logistical access. Black Creek is narrow by the railroad bridge, so the barges must be modular."

All the smaller bridges should be completed in about two years. Work on the DDI started this summer and should be finished in three years. Construction of the noise walls is expected to start in October or November and finish up next summer. The installation of new lighting, highway signing and guardrails will be done towards the end of the project.

"The noise wall sections in front of Rolling View Boulevard will be 22 feet high and 5 inches thick, and posts will be spaced at 20 ft.," Rambeau said. "The FDOT right-of-way line is approximately 120 feet from the Rolling Hills decorative east side fence." 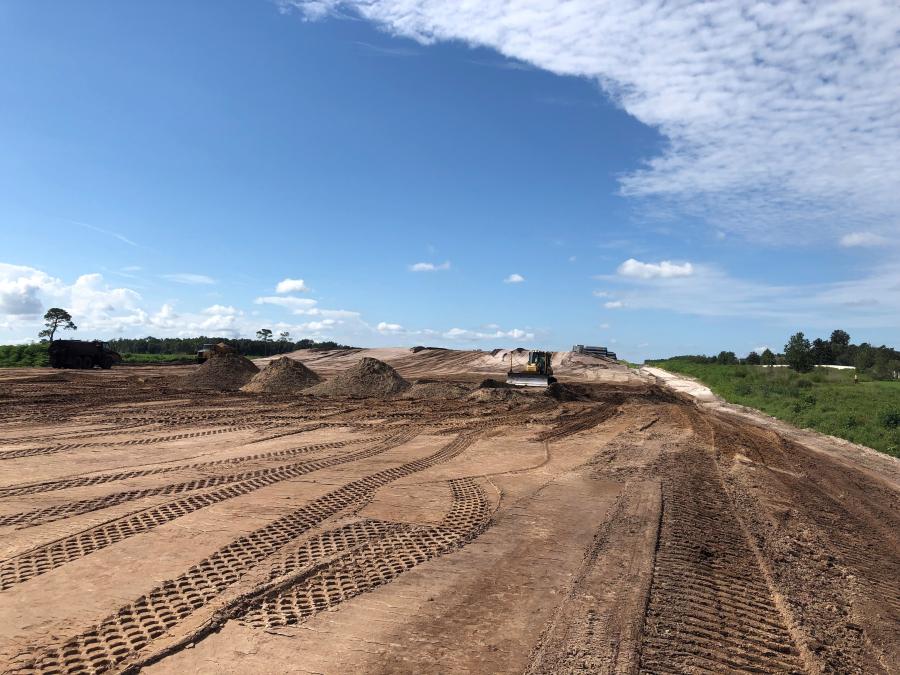 Construction of the $180 million, 9.7-mi. south segment for Phase 2 began in early April and is expected to be delivered in mid-2026. Superior Construction Company secured the contract in December 2018 for the project, which has a work zone between east of County Road 209 and north of State Road 16 in Clay County.

The main elements for this portion are the construction of a new multi-lane, limited access toll road (two lanes in each direction); a drainage system for the new roadway, including a series of storm water ponds; the building of 15 new bridges and two new toll facilities featuring overhead gantries with electronic tolling just west of County Road 15A and east of County Road 209; and the installation of traffic signals, lighting, highway signing and guardrails.

The goals for the 2019 construction are clearing, drainage, earthwork and bridge pilings for project segments between SR-16 and U.S.-17.

"Approximately six crews are working at this time, and this is expected to increase later this year with larger areas having been cleared," said Kenny Geisendorff P.E., vice president/senior project engineer, VIA Consulting Services Inc. "Pond excavation has begun, and retaining wall construction is expected to begin in September. Tolling facility construction will not occur for a couple of years."

Crews started the roadwork at the northern project limits (just north of SR-16) and are continuing to work towards U.S.-17. The project deals with 15 two-lane bridges — 14 will be concrete Florida-I beam bridges and the one near the Reynolds Industrial Bridge will be a concrete flat span bridge.

"The bridges between the northern project limits and U.S.-17 are a priority, and there will be two bridges at each road intersection with SR-23, northbound and southbound," Geisendorff explained. "The project will transition from a four-lane facility to a two-lane facility near Reynolds industrial park to match SR-16. Only one bridge will be constructed in this segment, with one lane for northbound and one lane for southbound."

According to Geisendorff, the contractor's plan is to drive all bridge piling, complete the retaining wall and then construct the bridge decks. "The challenges will be coordination with CSX and the transport of earthwork needed to construct retaining walls," he said. "Superior has developed a plan to haul the majority of the fill material within the project limits. Therefore, segments will require consecutive earthwork construction operations from north to south to facilitate hauling operations. The bridges are expected to take approximately three years to complete."

The installation of new lighting, highway signing and guardrails will be done towards the end of the project.

Together, these segments make up a 10.5-mile limited access toll expressway on new alignment. They include a new partial Diverging Diamond Interchange at County Road 16A, an overpass over State Road 13 and a new overpass at County Road 209.

"Perhaps the most significant component of these segments is the new four-lane bridge over the St. Johns River, which will replace the existing two-lane Shands Bridge, which also lacks shoulders to facilitate emergency access and clearing breakdowns and crashes," said Sara Pleasants, FDOT's community outreach specialist for District 2. "The Shands Bridge only has a vertical clearance of 45 ft. and with the new river crossing, the clearance will increase to 65 ft. This will allow taller and larger vessels to travel the St. Johns River."

As part of Segment 6, a new interchange is being constructed at I-95 between State Road 210 and International Golf Parkway (IGP), as well as the construction of express lanes on approximately three miles of I-95 from the FCE interchange south to the IGP. As part of this "tail section," two new express lanes in each direction will begin just north of IGP and continue north through the interchange with the FCE.

"Both the northbound and southbound express lanes will connect directly to the FCE," Pleasants said. "The tail section of I-95 will be reconstructed to meet horizontal and vertical geometric requirements, along with modifications to the ramps at the IGP interchange. A new bridge is being constructed over the Big Island Swamp, a new interchange at the future County Road 2209 and a new bridge over the Trout Creek." CEG