Traffic accommodations being made for Genesee Avenue Overpass in San Diego. 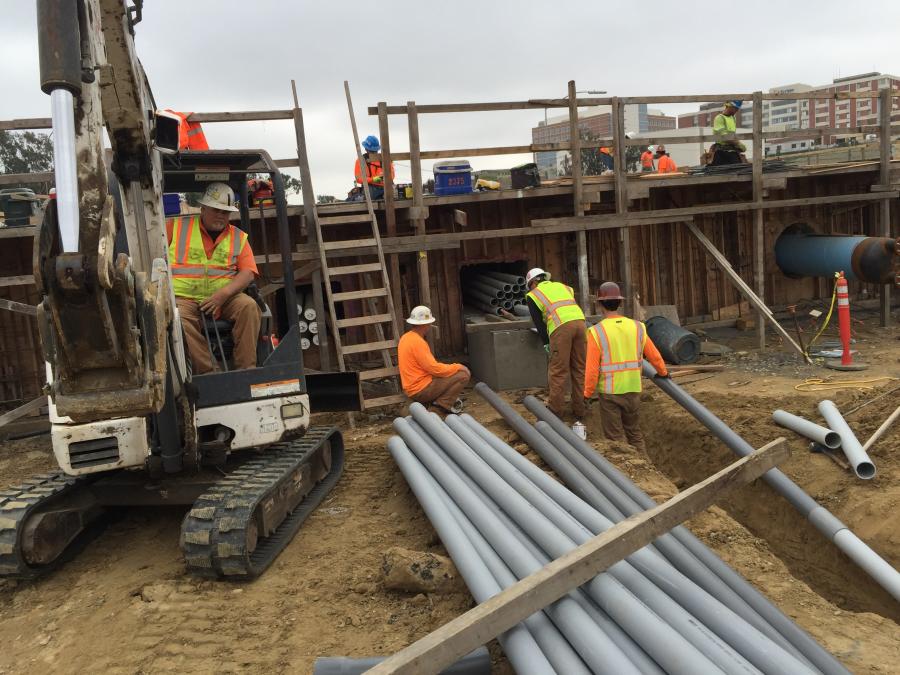 Caltrans photo Work is progressing on a $105.2 million I-5 at Genesee Avenue Interchange Project.

Work is progressing on a $105.2 million I-5 at Genesee Avenue Interchange Project where crews will replace the existing six-lane Genesee Avenue overpass with a 10-lane bridge that will accommodate greater traffic demands on the north coast of San Diego.

It is a city of San Diego project managed by the California Department of Transportation. The University of California at San Diego has been involved in planning the project to ensure minimal disruption to the nearby campus during construction.

Construction started in early 2015 and should wrap up in fall of 2017. Funding is provided through Federal Highway Administration, city of San Diego, Caltrans, San Diego Association of Governments (SANDAG) and University of California at San Diego programs.

The project is a part of a broader improvements plan for I-5 in San Diego's North Coast Corridor. In addition to replacing the overcrossing, the project includes widening the freeway access ramps, adding an auxiliary lane in the northbound direction on I-5 between Genesee Avenue and Roselle Street, and constructing a new separated bike path.

“It will improve east and west traffic flow on Genesee Avenue,” said Arturo Jacobo, project manager of I-5 North Coast Corridor for the California Department of Transportation District 11.

The project will provide links to pubic transportation and employment centers, hospitals and the University of California at San Diego. In doing so, the project is expected to greatly improve the movement of people and goods through the area.

A bike path will be built along the west side of I-5. The path will link with the Sorrento Valley COASTER commuter train station with University of California at San Diego and area businesses.

The project will include native, drought-tolerant, self-sustaining landscaping. More than 640 native trees will be planted and will be irrigated with recycled water.

Flatiron West Inc. of Chino, Calif., is contractor for the I-5, Genesee Avenue project.

About 150 workers are on the job each day. Crews work on both day and night schedules.

Stage 4 is under way. It includes road and bridge construction; widening of Genesee Avenue; bike path construction; building of retaining walls; and construction of new ramps.

Stage 5 will feature construction of the other half of the new Genesee Avenue overpass, building of a pedestrian crossing and an asphalt-concrete rehab on I-5 at the location.

The project is currently on schedule and at budget.

Heavy Equipment Is in Full Operation

Cranes, excavators, bulldozers, backhoes, motorgraders and super 10 haul trucks are being utilized on this job.

No dirt had to be brought in or removed to complete the project.

Motorists should expect overnight lane closures at times. Pedestrians will not be allowed within the project limits. Southbound bike access will be maintained via the I-5 shoulder.

A preconstruction community outreach program was developed to inform residents, businesses, motorists and the general public about the project's construction impacts. The communication plan includes a project website, a traffic demand management component, a 1-800 phone number and a single point of contact for answers to construction questions.

Planners report that the project will improve east and west traffic flow on Genesee Avenue. It also will improve access to and from I-5.

Planners expect the project to be important in job and population growth in the area. The project also makes it easier to build future carpool lanes on I-5. - CEG