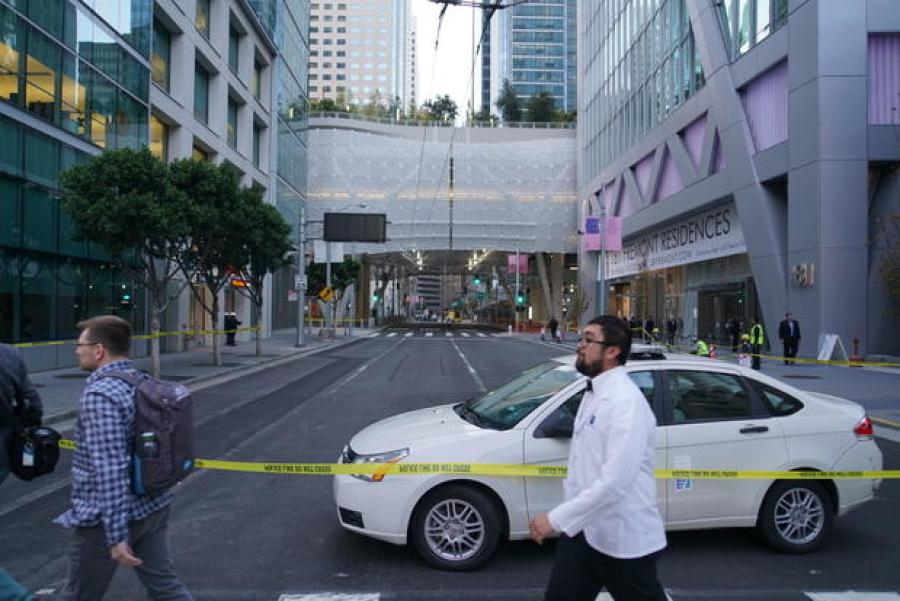 City officials closed the terminal and certain streets as a result of the cracked beam. Commuters reverted to the Temporary Transbay Terminal, which they had been using during the construction project. (Photo Credit: NBC Bay Area)

San Francisco's new Transbay Transit Center was shut down Sept. 25 after the discovery of a cracked steel beam.

Workers found the issue while they were installing ceiling panels on a bus platform located on the facility's third floor, and became worried that the beam could fail, the San Francisco Chronicle reported. The 6.5-ft.-deep beam is made from American steel and sits above the building's third floor with dozens of others that support the roof park, along with five to six ft. of soil. The transit authority said it planned to inspect all of the beams, the San Francisco Chronicle reported.

City officials closed the terminal and certain streets as a result. Commuters reverted to the Temporary Transbay Terminal, which they had been using during the construction project.

The Center had opened Aug. 12 with bus access and a rooftop park spanning over 5 acres. When complete, it will also include Caltrain and California High-Speed Rail services, Curbed reported.

Officials have said that they do not yet know what caused the crack.

“While this appears to be a localized issue and we have no information that suggests it is widespread, it is our duty to confirm this before we allow public access to the facility,” said Mark Zabaneh, executive director for Transbay Joint Powers Authority.

The Center is located next to the Millennium Tower, another structure that has been plagued with problems; it has sunk 18 in. since its opening in 2009, and recently a cracked window was discovered. The beam at the Transit Center was found the same day at the engineers inspected the Tower's cracked window, but according to Zabaneh, the two incidents are unrelated.

The broken beam is just one of many problems the $2.2 billion project has seen since it began, the San Francisco Chronicle reported, with the facility going $800 million over budget and requiring a $260 million bailout from the city.

A second cracked beam has recently been discovered. This beam sits parallel to the initial one, although its crack is somewhat smaller than the first, the San Francisco Chronicle reported. Officials from the Transbay Joint Powers Authority said Sept. 26 that they were still unsure of what caused the cracks, and were still concerned that the beams could fail. Both are scheduled to remain closed until Oct. 5.

“We will not open the transit center or Fremont Street [over which the second beam is located] until we are certain the issue is 100 percent rectified,” said Zabaneh.