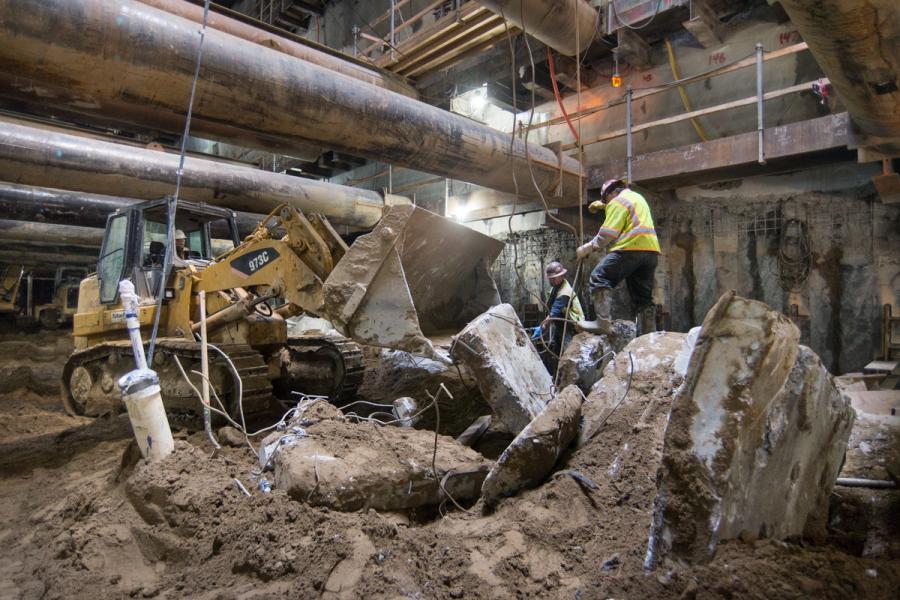 Construction of San Francisco's massive $1.58 billion Central Subway project has forged through its fourth year with completion expected in February 2018. Testing of the system will follow.

Central Subway — the second phase of the Third Street Light Rail line that opened in 2007— is slated to open for business in the first quarter of 2019.

When construction of Phase 2 kicked off in 2013, builders of San Francisco's new Central Subway light rail project described it as the Bay Area's most significant capital investment in generations.

Central Subway is spearheaded by the San Francisco Municipal Transportation Agency and is funded by local, state and federal sources.

The new subway line will run from the Mission Bay area just south of AT&T ballpark north through Union Square and on to Chinatown, speeding riders along while reducing vehicle traffic in an area heavily used by commuters and tourists.

When Construction Equipment Guide previously reported on the project in fall of 2015, the Central Subway project had already achieved some major milestones including attainment of environmental clearance from the Federal Transit Administration and relocation of numerous utility lines in preparation for station construction and tunneling.

Tunnel boring had been completed and crews were installing concrete and light-rail tracks. They also were starting work on four new light-rail train stations.

Barnard Impregilo Healy Joint Venture of Bozeman, Mont., had the successful low bid of $233.5 million for the tunneling work.

Program and construction management is being handled by Central Subway Partners AECOM of Los Angeles and EPC Consultants Inc. JV of San Francisco. The partners had the winning bid of $147.3 million for management service.

The project has about five subcontractors. All contracts were awarded to low bidders.

The project includes eight to 10 trades on any given day and the daily workforce ranges from 150 to 200 workers.

“Track installation work will be ongoing during the next year,” said Eric Stassevitch, program construction manager for the Central Subway Project.

As the project moves toward completion in early 2018, final construction items include completion of major structural elements of three underground subway stations and installation of track along with subway operating systems.

According to the Central Subway progress report for August, the Headhouse at the Chinatown Station has been excavated and barrel vault installation was completed for Reach 5 of Platform Cavern South (PCS) and Reach 1 of Cross Over Cavern (COC). Minor street work, monitoring and surveying also were taking place.

At the Union Square/Market Street Station, the platform box invert slabs were completed; waterproofing installation continued on emergency exit stairs 3 and 4; HVAC work continued and a soil plug was removed from the North Concourse.

At the Yerba Buena/Moscone Station, work includes force mains were replaced; curbs and gutters were poured at Clementina and Gallagher streets; shoring and excavation work began for stair 4; cold-formed metal framing began on the Concourse level; and crews began bringing rail into station.

Significant progress also was made on the surface, track and systems along 4th Street, including track slab installation and pavement renovation.

The Stations Contractors' Safety Reports shows “no recordable accident” took place in August and the rates of work site accident incidents by the man hours worked continue to be below industry standards.

Detours have been needed at various points around the construction sites. Noise has also been an issue, Stassevitch said.

New subway cars are now in production at the Siemens Corp. plant in Sacramento. Four cars are being built for the Central Subway and 24 more for the agency short-term needs, Stassevitch said.

Phase 2 extends the T-Third Line rail service in the densely-developed Bayview and Mission Bay areas to downtown and Chinatown. The T-Third Line is part of San Francisco's Muni-Metro line.

“The second phase of the T-Third Line will provide a high-speed, north-south, underground transit link connecting some of the densest neighborhoods on the west coast, significantly reducing travel times both between neighborhoods along the alignment,” Stassevitch said. “The project also will create new destinations for residents and businesses in neighborhoods farther out, such as Dogpatch, the Bayview, Hunter's Point and Visitacion Valley, providing easier access to jobs downtown and in SoMa (South of Market), but also to transit links such as Caltrain, BART and eventually California High-Speed Rail.”

The Central Subway will provide direct connections to retail, sporting and cultural venues while transporting riders to jobs and schools in the area.

The light-rail trains will also provide transportation to a burgeoning technology and digital-media hub.

Some streets will have to be replaced along the route. However, once the project is completed, people in cars will be able to use the same routes as before.

Some lanes are closed during the work, but a lane is left open for cars to use during construction. Still, as with major construction projects, commuters have faced delays, especially at peak hours.

Once the project is finished, car traffic above ground should be reduced. That's because ridership numbers on the Central Subway are expected to be high.

It's the first north-south route and that's expected to attract riders.

The Central Subway project is repurposing a small portion of the southeast corner of the garage to be used as a northern entrance structure and rooftop plaza for direct access from the square to the future Union Square-Market Street Station. The Union Square Garage was built in the early 1940s by famed local architect Timothy Pfleuger.

To build the subway system, a construction approach called deep tunneling was used. Deep tunneling allowed most of the work to be done below ground, reducing disruption on the surface.

Twin boring machines, each 350 ft. long and weighing 750 tons tunneled under the streets of San Francisco. One took on the name Mom Chung and the other Big Alma.

Asked about challenges to the project so far, Stassevitch commented, “Underground excavation always presents challenges as well as utility work in a densely populated and urban area.”

“A significant amount was removed,” Stassevitch said. “Depending on soil quality, excavated material has been brought to a number of sites for processing and distribution, including the Brisbane Baylands, Treasure Island, and the Port of Oakland.”

Concrete and asphalt removed from the construction sites have been recycled, Stassevitch added.

Northbound and southbound tracks will run down the middle of 4th Street.

In addition to helping residents travel locally, the rail system will help carry large crowds attending events at convention and professional sports venues in the South of Market area.

The South of Market area is expected to experience strong growth over the next 20 years.