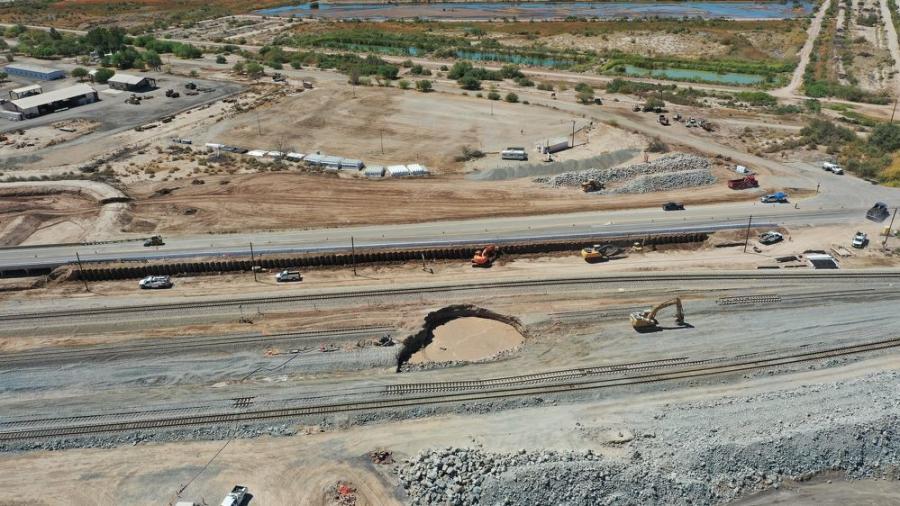 The moving mud pot is affecting Caltrans and the Union Pacific Railway.

The power of nature, specifically plate tectonics and seismic activity, literally forced the California Department of Transportation (Caltrans) to build a 5-mi. temporary road adjacent to state Route 111 (SR-111) and install new underground infrastructure for the two-lane highway and the Union Pacific Railroad to abandon tracks and build new ones in the Imperial Valley, east of San Diego.

Due to those reasons, there was an imperative need for the Caltrans $11.7 million, SR-111 Niland Geyser Mitigation Project. 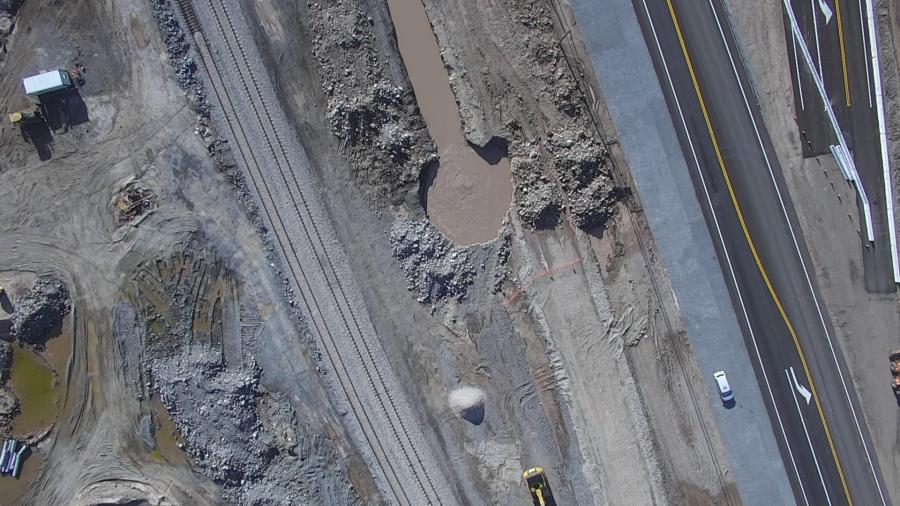 A natural-occurring geyser/mud pot, in existence since 1953, is moving toward SR-111 and is likely to reach the highway.

"As the geyser moves west and beyond the temporary road, Caltrans will then rebuild SR-111," said Shawn Rizzutto, Caltrans project manager. "The mud pot is releasing water, carbon dioxide and hydrogen sulfide gases in low concentrations, but does not pose a health hazard from a distance. The geyser has moved slowly in the past 11 years; however, the rate of movement has increased and the geyser has already encroached on the railroad right-of-way impacting Union Pacific tracks."

To ensure the safety of residents and those interested in seismology, access to the mud pot and public site visits have been prohibited.

Josh Bridwell, S&B's owner, who served as the project manager, was fully aware of the challenges involved with phase 1 and is awaiting the green light to start phase 2 to build the links to the temporary road.

"It will take a couple of days," he said.

The main challenge was the fast-track nature of phase 1. 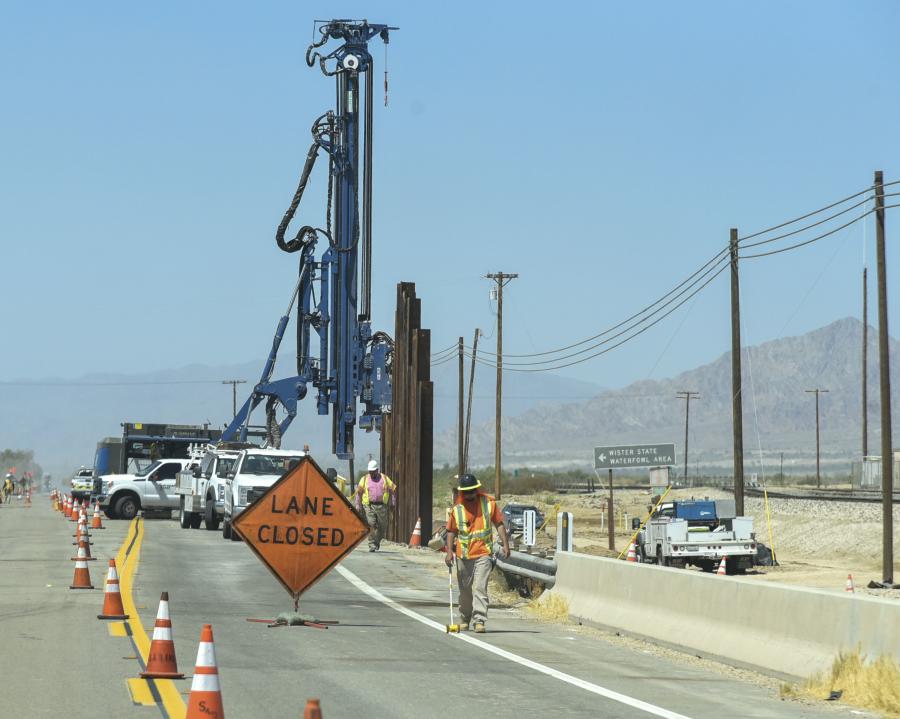 "They gave us a two-week shutdown of the highway and we were working 24 hours a day with two, 12-hour shifts," said Bridwell. "We had to grind out the hole that we were replacing with dirt in 24 hours, and then immediately place geogrid fabric, and all the drainage with different types of aggregate and bring it up to grade."

The excavation went down 12 ft. where slotted drain pipe was installed.

"It's fragile and it had to be buried in rock," said Bridwell. "We couldn't run equipment on top of it until we got it up to grade to avoid crushing anything — we had to do a lot of work on the side. It was a tight work zone, especially with all the aggregate to bring in and stockpile adjacent to the Caltrans right-of-way."

S&B installed some of the conduit that AT&T needed to relocate its fiber optic line. Relations between S&B and Caltrans were excellent and issues were resolved rapidly due to the history of the work S&B has done for the DOT.

"The work went according to plan," said Bridwell. "The only issue was getting our subcontractors in once we placed the geogrid, aggregates and pipe."

Once the subgrade was placed for the existing road, the permeable concrete was poured and covered by 6 in. of asphalt.

All the material excavated from the existing highway was used to create the subgrade for the temporary road, which was also covered by 6 in. of asphalt and has a small shoulder on either side.

"We put in a drainage channel and some pipe culverts," said Bridwell.

Bridwell was assisted by Danny Sokol, the onsite foreman and Ryan Spirz, the project superintendent.

"We're good at what we do," said Bridwell. "We specialize in Caltrans work and do quite a bit of emergency work in District 11 — we've worked together for years. It's a long way to the Imperial Valley and it was a sacrifice to not see your family for a few weeks. But this was a unique project and the guys were excited to get on this one."

The crews were put up in local motels.

Work on the project began on Aug. 2019 when construction crews placed one-way traffic control along a 2,000-ft. segment of SR-111 at Davis and Gillespie roads, about 5 mi. northwest of Niland in Imperial County.

The funding is being provided by the State Highway Operation program for emergencies.

The first part of the initiative was constructed in three phases — all completed by early 2020:

"We started planning for the project about one-and-a-half years ago when we were alerted by Union Pacific that the mud pot was moving," said Rizzutto. "We started coordinating with Union Pacific, the California Office of Emergency Services, Imperial County Emergency Services, the communities of Niland and Calipatria and other stakeholders. This road is one of two north-south corridors that we have in Imperial Valley. SR-111 acts as a major farm-to-market road for us, as well as serving Niland and Calipatria. We had a very robust public outreach program and developed a web page for the project to communicate the progress of the work and the various stages." 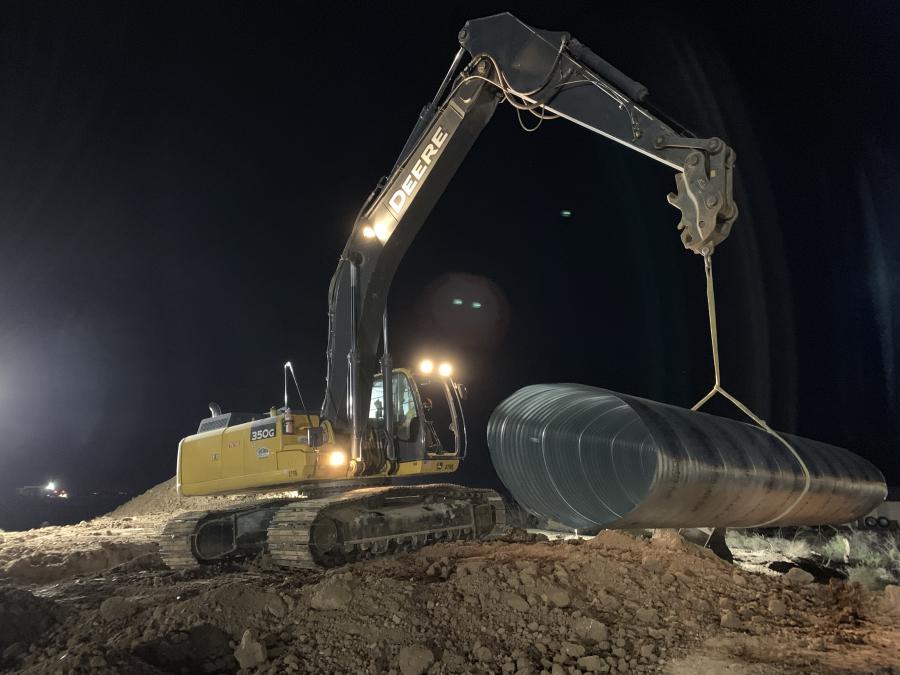 The start of second stage of the project is dependent on how quickly the mud pot moves. As soon as it reaches the sheet pile wall, perpendicular for 520 ft. west from a nearby bridge, the tie-ins will be constructed and traffic switched to the temporary road.

"We're coordinating with local, state and other partners for this mitigation and are implementing this emergency project to expedite the work," said Cathryne Bruce-Johnson, public information officer, Caltrans District 11. "Caltrans will tie-in the ends of the newly-built roadway to the existing SR-111 when the geyser water reaches the sheet pile walls located east of the highway. The temporary roadway will serve as a detour around the geyser."

The mud pot, one of several thousand in the Imperial Valley region, has been in existence for about 70 years and has moved about 100 ft. per year. In 2016 there was a swarm of seismic events and it began to move faster. There is a deep vent, over one-half mi., that is venting gases and water through a perched groundwater table. Some believe it is moving along a fault line. A seismic event could accelerate the movement or shut it off. Experts are unable to predict the speed or movement of the mud pot.

Traffic counts on this section of SR-111 are based on season movement. There are no plans to widen the existing road after the mud pot crosses it.

"Our engineers, geologists and geotechnical engineers got together and came up with a three-tiered approach that addressed construction of an emergency road, mitigating the gas and water through drainage and venting — a challenge because of the water table being 50 feet below the surface," said Rizzutto. "Because of the unpredictable nature of the direction, we elected to utilize sub-surface drainage improvements and permeable concrete to vent everything out on the sides of the road. The key for us was to keep the sediment neutral. The water and the gas produces a lot of sediment and we did not want it to create cavities or voids." 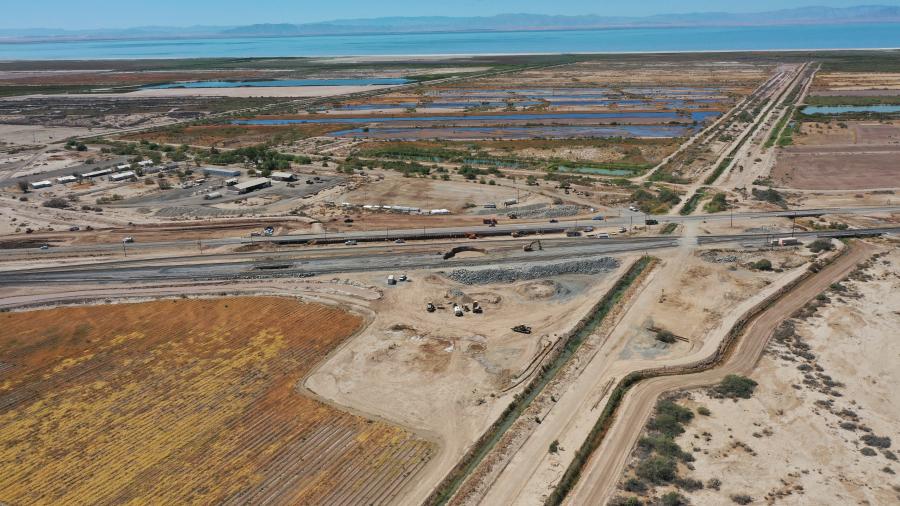 The new road surface has a life expectancy of 20 years. Kinder Morgan relocated a 20-in. gas line, as were five fiber optic lines and one phone line.

"This is a unique situation," said Rizzutto. "According to the geophysicist that Union Pacific hired, this is the only mud pot moving this amount of water in the world. We're interested to see how our engineering and construction techniques fare against this naturally occurring phenomena."

The speed limit in the construction zone was reduced to 55 mph, with motorists urged to slow down to protect construction workers and avoid hitting construction equipment.

Peak days had 20 S&B and subcontractor employees on site per 12-hour shift.

"There wasn't any major wear and tear per se," said Bridwell. "The main push was the very first night when we had to grind out the highway. We hired a local earth mover — they did the grading and moved the majority of the dirt. They brought in a mechanic for 24 hours to deal with multiple breakdowns. Our crews were not excavating, so there wasn't a lot of tearing up of the equipment"

"My family's been in construction for 60-plus years and we've worked with a lot of dealerships and developed long-term relationships," said Bridwell. "When I started my company, they helped me out from the beginning. It's like family — we've known them forever and when we make a phone call, they'll get done what needs to be done."