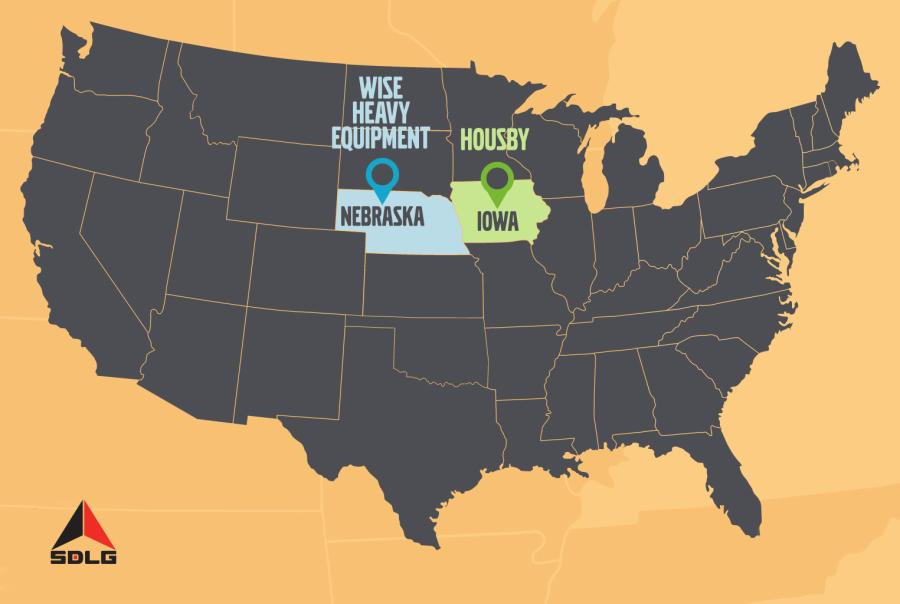 SDLG has appointed two new dealers to bolster its position in the Midwest. The appointments reflect SDLG's long-term goal to expand and strengthen its North American dealer network by partnering with seasoned, expert dealerships that know their markets well, providing superior service and support to SDLG's customers.

Both new dealers are taking over for Scott Van Keppel (SVK), purchasing the heavy equipment company's assets and assuming its locations. Housby Heavy Equipment is now the new SDLG dealer for Iowa. The Des Moines-based company is taking over locations in Ankeny and Cedar Rapids. Meanwhile, Wise Heavy Equipment has become the new SDLG dealer in Nebraska, assuming SVK's location in Omaha.

Nick Tullo, sales manager of SDLG North America, said the addition of these two companies will help SDLG capture market share, as both have deep knowledge of their local markets and have shown success in providing a high level of aftermarket service.

“When SDLG expanded into North America four years ago, we knew that the clearest path to success was partnering with knowledgable, dependable dealers,” he said. “Both Housby and Wise fit that description. Our existing customers in Iowa and Nebraska will get nothing but the best in aftermarket service from these two companies, and new customers in the region will learn the benefits that SDLG has to offer.”

Founded in 1969, Housby Heavy Equipment has grown to serve customers across America and around the world from its locations in Des Moines and Carroll in Iowa. Over the years, Housby has developed its product offering to include heavy equipment, ready-mix technologies and waste and forestry equipment.

“We have built strong partnerships with a diverse range of customers in the trucking and construction industries, and we're very optimistic about bringing SDLG's wheel loaders into the mix,” said Kelly Housby, partner of Housby Heavy Equipment. “Both Housby Heavy Equipment and SDLG put customers at the center of our business as a priority, so with these common values, we look forward to future success.”

Wise Heavy Equipment has served customers in the transportation, trucking and railroad industries since 1978.

Bert Wise, owner of the company, said the expansion of its portfolio to include SDLG's wheel loaders will help it provide customers in Nebraska with ideal machines for low-hour, seasonal work, as well as the aftermarket service that has become synonymous with SDLG.

“We are honored to partner with SDLG and be the sole distributor of its products in Nebraska,” he said. “Its well-built, easy-to-operate machines will not only help us build a strong product portfolio and give customers more choices than ever before, but also enable us to tap into landscaping and snow removal, among other applications, all while improving services and support for customers in Nebraska.”