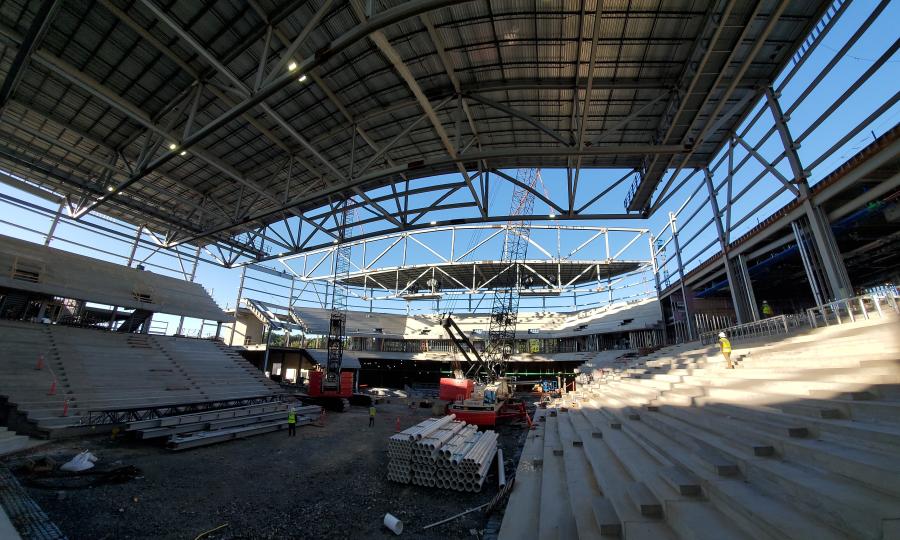 Class III Structural ($1 million to $2.5 million) was awarded to Williams Steel Erection Co. Inc., for construction of a multi-purpose 10,000-seat arena on the campus of James Madison University in Harrisonburg, Va.

The Steel Erectors Association of America (SEAA) announced the winners of its 2022 Projects of the Year.

Entries could be submitted in four classes for structural construction based on contract value for that portion of the job. In addition, the association opened a new category this year for miscellaneous metals in two classes. This category includes bridges, decking, ornamental steel, reinforcing steel and steel fabrication projects.

In all, seven companies were recognized for effectively solving unique jobsite challenges while safely completing projects. (Note, there were no submissions this year for Class II Structural or Class I Miscellaneous Metals.) Project submissions are chosen by an independent panel of judges.

"The judges were also impressed with the use of innovative technology to solve constrained labor supply issues on the winning project in the Miscellaneous Metals category," he said. "We hope participation in this category grows with time, as we add new benefits that address the needs of members doing this type of work."

Winners receive trophies, feature article coverage in Connector magazine and the chance to participate in peer panel discussions with SEAA and at AISC's Steel Conference. 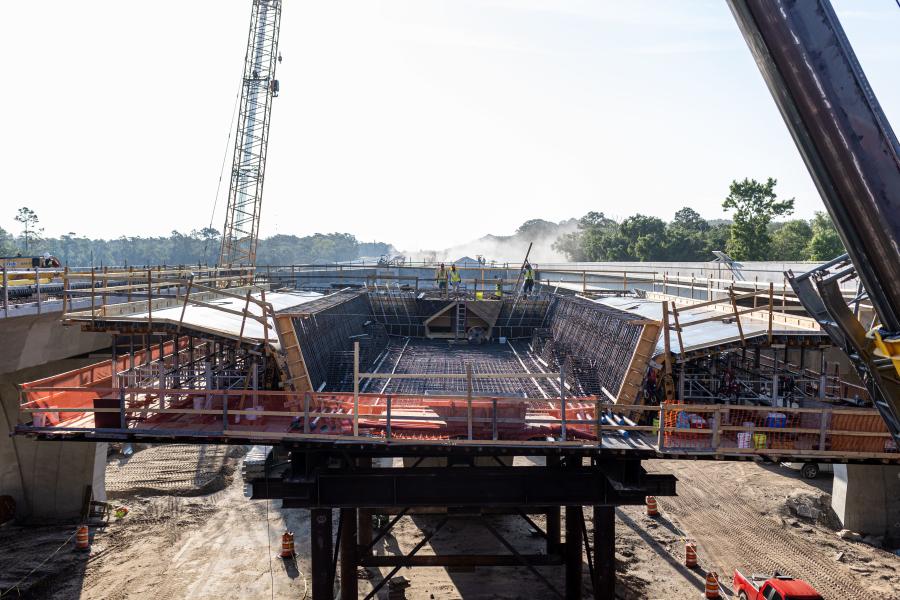 Shelby Erectors was recognized in the inaugural award for Miscellaneous Metals in Class II for the Wekiva 6 project, 5.5 mi. of FDOT roads and bridges along the Wekiva River in Central Florida. The job required tying 16 million lbs. of rebar and installing nearly 1 million sq. ft. of stay-in-place deck forms over 18 structures.

Coordinating schedules and labor was one of the biggest challenges as crews simultaneously worked on three separate locations. The project included four bridges that featured long decks and complex cast-in-place box girders. To maximize labor supply, the company pre-tied as many structures as possible and utilized new robotic technology to tie rods. 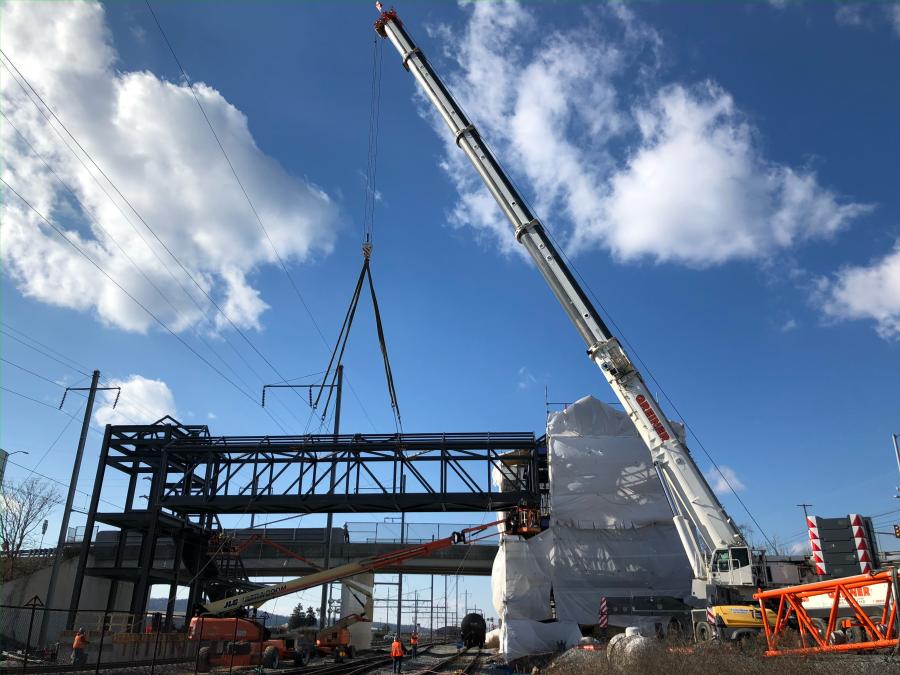 Class I Structural (up to $500,000) was awarded to Steel Fab Enterprises, LLC for an Amtrak train station and walkway bridge in Middletown, Pa. Receiving an Honorable Mention in this category was Hodges Erectors Inc., for a 57-story condominium called Missoni Baia in Miami, Fla.

What appears on the surface to be a straight-forward job was actually very challenging due to the environmental conditions. Steel Fab fabricated and erected all structural steel, ornamental stairs and handrails on a job site that was adjacent to active train tracks. All assemblies had to be lifted by crane over de-energized transmission lines at night or on weekends, and daytime work required close coordination with Amtrak officials.

The company pre-determined 15 assemblies to be lifted by a 600-ton Demag AT crane. In addition, special three-coat painted steel required the use of padded protection when handling to prevent damage to the finish.

The scope of Hodges Erectors' project (Honorable Mention, Class I) included erecting belt trusses from level 36 to 38 and the roof crown truss. Among the challenges were rain and winds that often exceeded 30 mph, requiring demobilization at a moment's notice. In addition, half of the belt trusses exceeded the tower crane's capacity, requiring tandem picks with two tower cranes.

Class III Structural ($1 million to $2.5 million) was awarded to Williams Steel Erection Co. Inc., for construction of a multi-purpose 10,000-seat arena on the campus of James Madison University in Harrisonburg, Va.

Receiving an Honorable Mention in this category was Flawless Steel Welding for an apartment community in Denver, Colo., known as the Uptown Pearl.

Atlantic Union Bank Center Arena consisted of 2,700 tons of steel, including a roof structure supported by eight trusses weighing up to 55 tons each with a maximum length of 230 ft. All trusses were fully assembled on the ground and then tipped and raised into place with two cranes, then supported by significant temporary bracing.

From the start, Williams Steel Erection Co. Inc. determined that the design criteria for the project conflicted with the constrained work site, which is built into the side of a hill on one side and abuts adjacent streets on two other sides. Meanwhile the bowl of the arena was not large enough to fully assemble the trusses.

The final truss placement was among the most difficult, with only a 30 ft. opening remaining to accommodate three cranes and the truss. The company used three Link-Belt cranes for the job — a 100-ton hydraulic truck crane, 200-ton lattice crawler crane and 200-ton lattice truck crane.

Flawless Welding (Honorable Mention, Class III) was brought into the Uptown Pearl — a mixed-used apartment community — to provide a turnkey solution when the previous steel subcontractor abandoned the job site with the project behind schedule. After re-detailing all connections of landing for post installation and accounting for previous inaccurate concrete embeds and anchor bolts, the company was awarded an additional scope to fabricate and erect a tavern inside a historic structure that left the original façade intact. 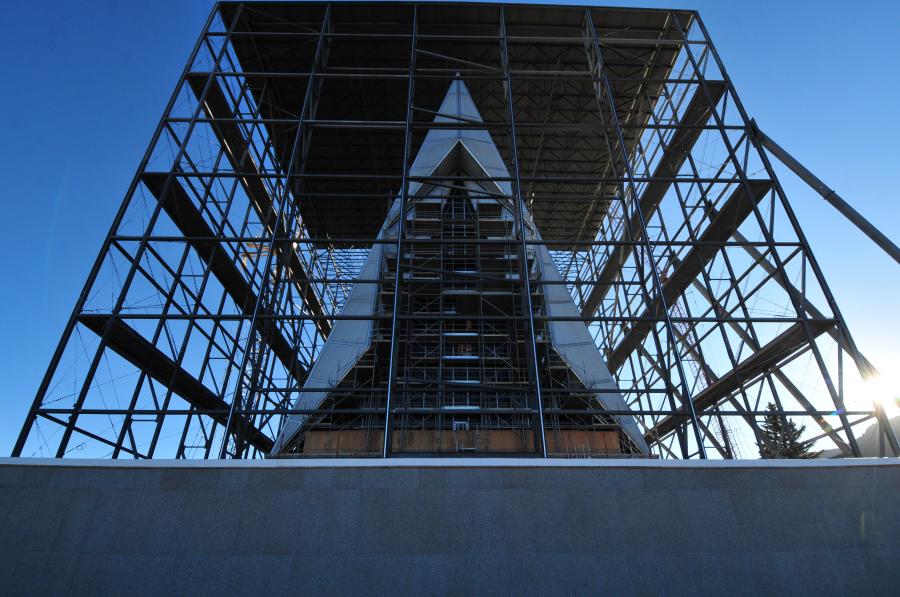 Deem Structural Services was recognized in Class IV Structural (over $2.5 million) for its work on the United States Airforce Academy Cadet Chapel in Colorado Springs, Colo.

Receiving Honorable Mention in this class was Mid Atlantic Steel Erectors for the Virginia General Assembly Building in Richmond, Va.

Basden Steel, the fabricator for the Cadet Chapel brought in Deem Structural early in the process to determine erect-ability of the 40,000 sq. ft. clear span temporary structure to be built over the Cadet Chapel. The structure, which reaches heights in excess of 180 ft., will allow for renovations of the National Historic Landmark. The structure had to be suitable for dynamic loads of installed overhead cranes.

All attachments, including roof deck, had to be mechanically fastened as welding presented an unsuitable risk to the historic structure. In addition, significant temporary bracing was necessary to carry horizontal loads and load distribution forces that changed throughout the project. When renovations are complete, Deem Structural will return to dismantle the temporary building.

Working in tight site conditions, Mid Atlantic Erectors, which received Honorable Mention, erected a 15-story office building that blends with an original 1912 façade. This required fabrication of a 3-story truss spanning a basement level to support upper floors. In the historic portion of the building, the company custom built reinforcing steel on site and retrofitted window supports.

Project challenges included winds in excess of 25 mph that would shut down tower crane operations and low ground pressure requirements that limited mobile crane options. In addition, the project faced delays due to pandemic-related shut downs and city riots.