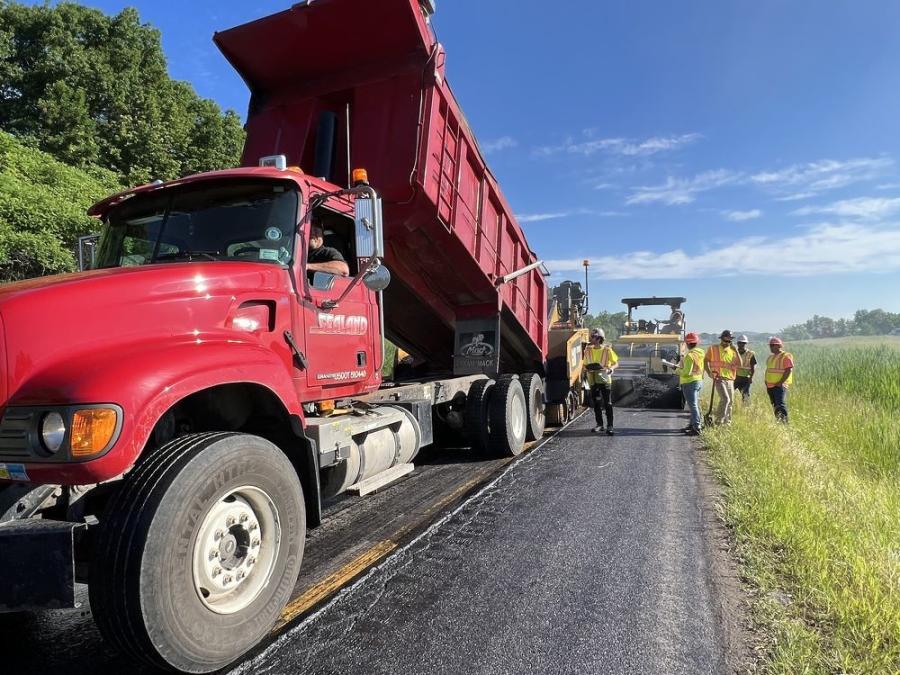 The road work is utilizing a method called “cracking and seating,” an innovative engineering technique that reuses the existing subbase for paving. It is projected to be 15 years before this stretch of road will need its next surface treatment. (Sealand Constructors Corp. photo)

The New York State Department of Transportation (NYSDOT) is investing $32 million to resurface and improve 44 lane mi. of I-390 from Route 5/20 (Exit 10) to I-90 (Exit 12) in the towns of Henrietta, Rush and Avon in the Genesee Valley Region (Monroe and Livingston counties). 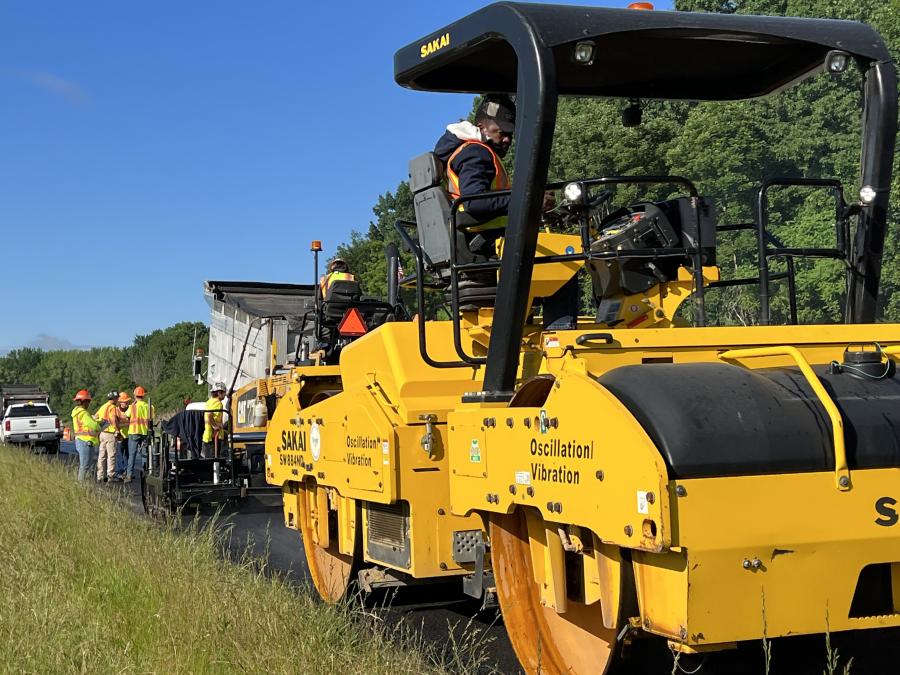 The work, being undertaken by Sealand Constructors Corp., began in summer 2021 and substantial completion should occur by Nov. 30, 2022. Sealand was awarded the contract on May 3, 2021.

According to NYSDOT, the work being done is to overlay the existing deteriorated concrete pavement with asphalt to restore rideability and prevent deterioration of the entire pavement structure. The work currently going on is the second season of a two-season construction job. The project's first season completed the same stretch of I-390 but in the northbound lanes.

This section of I-390, constructed around 1976, has two lanes in each direction, with a shoulder on each side.

The funding for the project was provided by New York State and is part of the Statewide Transportation Improvement Program (STIP).

The road work is utilizing a method called "cracking and seating," an innovative engineering technique that reuses the existing subbase for paving. It is projected to be 15 years before this stretch of road will need its next surface treatment.

"Safety is always the top priority at NYSDOT," said NYSDOT Public Information Officer Joe Leathersich. "With this work zone, as with any work zone, it's imperative that motorists slow down and pay attention to keep our crews and themselves safe."

So far, Sealand has completed the northbound side of the project.

"The job is broken down into phases," said Steve Howe, Sealand's project manager. "We're in the second year. The northbound side is pretty much complete, except for a little bit of guiderail work and signs and miscellaneous work."

Crews are working on the southbound lanes.

‘The brunt of this job deals with heavy materials — most of the money is going into paving," said Howe. "You also have full-depth boxed out areas. We're putting in underdrain in limited areas to help with drainage. There is also new guiderail going in some areas, and we're doing a crack and set operation for the concrete highway. You just crack it about every two feet, clean it up and pave over it with three lifts of asphalt — six inches in total.

"The biggest challenge on this job is just coordination, trying to keep activities moving from one end to the other," he added. "When you're working on an expressway like this, you always have a crash truck with your crew. If I have a survey taking place, with people walking down the road and laying out spacing, you have to protect them. We'll have 10 to 12 crash trucks out there when we're busy, just staying behind everybody"

Crews have plenty of workspace in some areas. 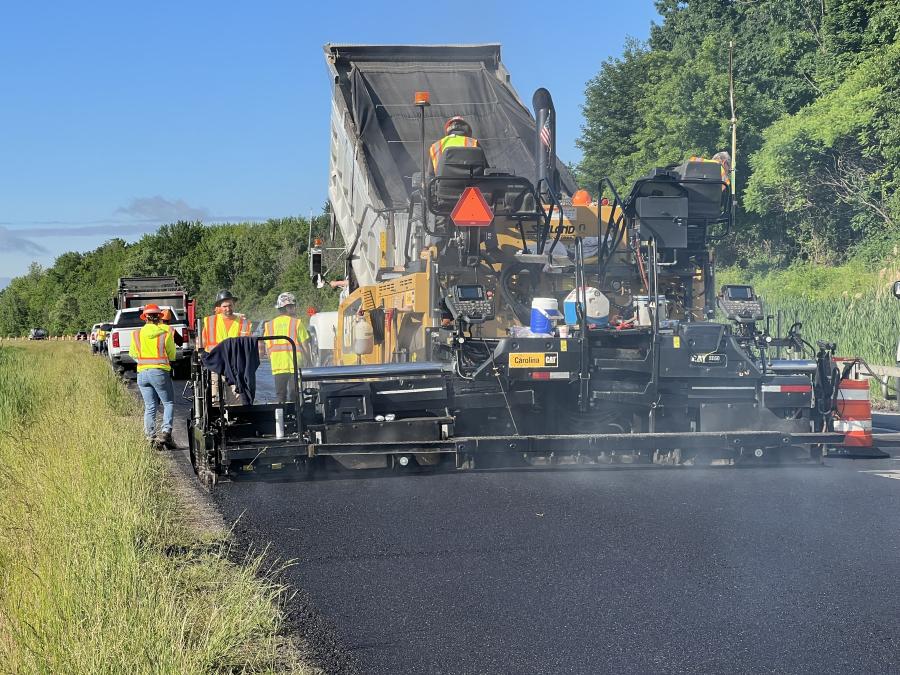 "It's a long job we're doing here," said Howe. "It's 10 miles on the southbound side this year. You can stretch this out, but you are limited on your closures and the state doesn't want you to close a mile stretch of road and then open it up for 0.5 a mile, and then close it for another mile. There is room for equipment and materials. It has 12-foot lanes and 12 and 10-foot shoulders. We do have cars and trucks running next to us, so we have to be careful at all times.

"Our crews are doing a good job," he added. "This year is going much better than last year. The project was awarded a little bit late, so we didn't get started first thing last spring and we were working right into December. We can't do this for this season. We have to place the top down and the road has to be striped before it gets cold. We had a much better start this year."

There are no serious utility issues and there is no deep excavation. The underdrain installation has crews digging down 3 ft. and the full-depth boxed out areas are only digging a few feet. Nearly 95 percent of the work is being done via day shifts, with night work focusing on a couple of ramps that have to be milled and paved.

The work plan is based on closing one lane and working on it.

"I wish we they would put crossovers in and let us have a closed work area," said Howe. "I've done that on previous jobs and it was safer and faster. I've broken the job into three areas of three-plus miles in each phase. We're working on the first phase right now and we have three boxed out areas. We boxed out one side, did the paving and then moved the barrier and do the same thing on the other side. These are all your full-depth repair areas."

The crews are honing their work via the repetitive nature of the project.

The concrete highway is in fairly good shape.

"I've driven down I-390 for quite a long time — they've done tons and tons of repairs before we even started this project where contractors would excavate small areas and do repairs," said Howe. "We're doing a few repairs, but not many. We just crack the concrete, do a couple of minor repairs and pave over it. We're doing the underdrains at the same time as the boxed-out areas. They want the underdrains in 14 days before you do any cracking to help get rid of the water that been pooling around the concrete."

A serious amount of milling is taking place and equipment operators are using Wirtgen milling machines and Caterpillar 335 and 225 excavators with 48-in. buckets are helping to excavate the fill-up areas. There are many mini-excavators on site, such as Volvo 190s and Komatsu PC139s. Caterpillar 950 loaders are proving valuable.

‘We have an aggressive schedule this year and we got a lot of preliminary work done," said Howe. "We have 120,000 tons of asphalt to do this year on the south side."

"We're working well together," said Howe. "Sean [Stewart] is a new guy with Sealand. He didn't have a lot of experience doing roadwork. He used to build big concrete water tanks for cities. He has a lot of experience with personnel and safety. We have some very good foremen and the crews take pride in their work."

Peak days have approximately 100 Sealand and subcontractor personnel on site. The main subcontractors are Pavilion for crack and seat concrete; Donnagle for milling; Phelps Guiderail for signs and guiderail; O.H. for striping; Natural Restorations for landscaping; and DiKat for electrical. 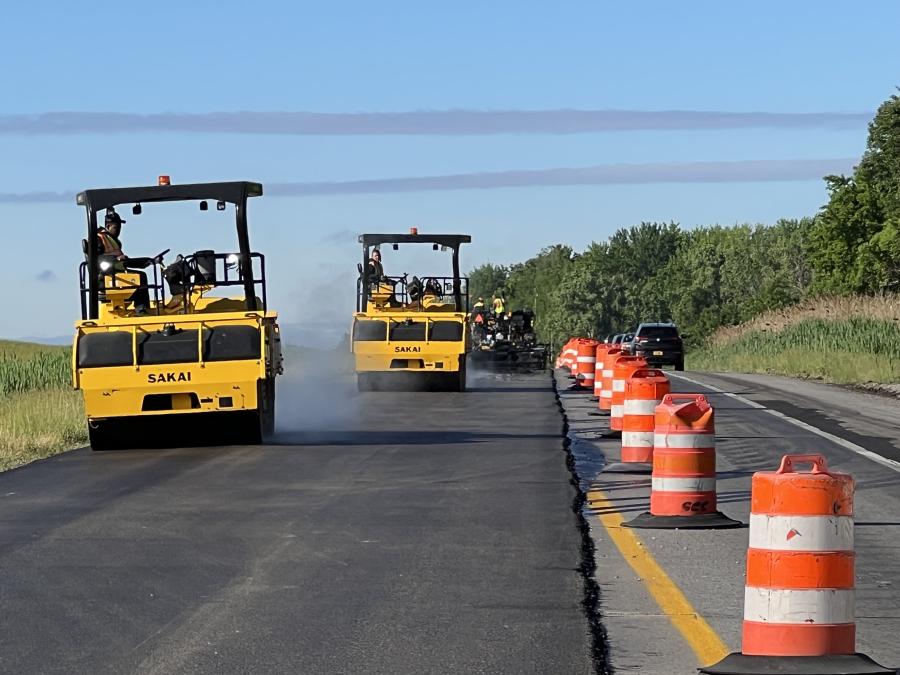 "On any construction job, maintenance is ongoing," said Howe. "You never know what is going to break. The most common breakage is hydraulic lines and we're rushing off to get new ones. We don't have a mechanic that stays on site full-time. Sealand has three or four projects going on at any one time. When we do mainline paving, you can have 20 trucks running up asphalt. It's a lot of wheels turning, so you need someone close if something breaks. There is no waiting. It has to be fixed immediately."

Howe has been a project manager for 25 years and appreciates proper maintenance.

"You need really good mechanics," he said. "We run this equipment hard all summer as construction in New York is pretty limited — you have a small window to get the work done. So, in the winter months, the equipment goes to the shop and that is where a lot of the key maintenance comes into play. They have to make sure everything is fine-tuned for the following season.

‘You also have to grease the equipment every day and check your fluid levels," he added. "The operators let us know if they see something is wrong and we get a mechanic out there." CEG